I have heard that it is possible to convert the stromberg setup with twin hd8’s from xj6 bolting straight onto the manifold ….has anyone done this?

Thanks for the correction Paul…… but have you heard of it being done?

The mounting flanges are the same pattern…the throttle shafts will line up: how they adapt to the stock linkage, I have no clue.

As Paul says, the manifold should fit to the head.

Getting the water pipes to connect has been my biggest problem.

You’d need to make some sort of connector for the throttle shaft on the rear carb to connect to the firewall linkage. I think Paul is right in that the shafts are in the same axis.

Again you’d need to rearrange the choke linkage too, which might present a problem.

I reckon the stud pattern for the Strombergs is the same as the SUs. You might be able to simply retrofit 2" SUs and port the manifold.

To be honest though, it’s not really a swap that is likely to reap much benefit.

Yep your right about benefits…. I too doubt them…… I don’t intend to do it …I was just curious 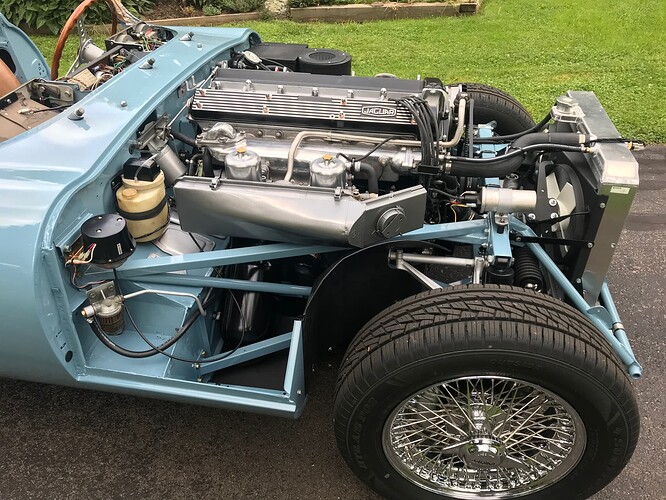 How does it perform Bill?

I’ve been running a pair of HS8 carbs on my SII E-type for years. The stock E-type manifold is 2-inch throat, so there is no need to modify the manifold. The only change is in the linkage for the throttle. As I recall, the chokes weren’t a problem, but I imagine a pair of HD’s might be a little different for the linkage(s). There wasn’t any significant difference in performance, but setting the mixture and idle is much easier with SU’s.

It took some fussing to get the mixture right, I ultimately needed to change the springs. And I am running UB needles IIRC. It performs very well.

Looking at Bill’s car the SUs are a much prettier unit than Strombergs, and as mentioned above are a more flexible item to tune to spec.

Bill did you use the stock Stromberg manifold?

Bill did you use the stock Stromberg manifold?

Yes, but I did sleeve it with 2 inch ID steel tubing. The carburetors were off of Mark 10, so I shortened the bells, and added choke parts. I did need to fabricate some of the levers. And I reworked the throttle linkage.

Did you use an earlier distributor? Strombergs run leaner than SUs, so the ignition advance curves are different. Leaner mixtures burn more slowly than richer ones. Also, some throttle plates on Strombergs have the air bleed button on them, and the bodies include temperature compensators and bypass valves which all contribute to leaning out the mixture. All this suggests that an earlier vacuum advance distributor (different initial and mechanical advance too) may work better with SUs than the Series II vacuum retard distributor.

I installed a 123 distributor. I believe I have it set on curve 2.

Wasn’t trying to insult anyone. Used to see people put SUs on former Stromberg Jaguars with disastrous results to piston tops and valves if they didn’t also deal with the ignition curve.

I once put a later XJ6 big-valve fuel injection head on an early XJ6 with Strombergs. Lotsa fun to drive. Not a fan of Strombergs, though often a necessary evil without spending money for SUs and kits.