Reversing lights both off

Bulb failure warning on dash. Both reverse lights n/w. Tried replacing both – no go. Fiddling at the gear lever does not help, so do not suspect gear lever switch. Intermittent but usually n/w. Ideas?

Alan - I would suspect an issue with the wiring from the rotary switch on the side of the transmission - signals are fed from that switch to the left and right bulb failure modules via slate (grey)/light green wires. This snip is from the Haynes manual wiring diagrams:

You may have to locate the gear position switch and wiring and do some back-probing to determine where the loss of signal (voltage) occurs.

Thanks for speedy reply Mike. I would agree, except that the bulb failure lamp comes on at the dash even when reverse is not selected, just as it would if any other bulb failed. I think that works by passing a tiny current through each lamp even when off so detecting normal resistance. Therefore I had diagnosed a common connection somewhere between the left and right rear clusters and the bulb failure module, pointing at an open there. Looking at the diagram which is probably not right for my car (Haynes and all that!) there is a BFM for each side so that can’t be it! IF the diagram is right…

Further to that Mike, It seems that the common grey/lt green wire from the two BFMs to the gear position switch is the only possible cause BUT how do you relate that to the Bulb Failure warning being on all the time? At 82, can’t get under the car any more but will find the grey/lt green wire in the boot and see if moving the gear lever puts it on. That should verify the switch, don’t you agree?

how do you relate that to the Bulb Failure warning being on all the time?

I believe you may have non-working bulbs somewhere else. Have you checked that both (there are two on each side) turn signal bulbs are working in the rear light clusters? And both license plate bulbs? And the side marker lights at all four corners? Interesting fact: in my '94 the reverse light bulbs are not monitored until reverse gear is selected. I know this because I replaced my reversing incandescents with LEDs (brighter white) and they cause a bulb failure warning but only while the car is in reverse. Your 87/88 model may of course be different in this respect.

Hi Mike
First many thanks for staying with me on this.
On my 1988 XJ40 (VIN 529827) , if there is a faulty bulb anywhere, the bulb failure lamp comes on the dash (the circuit concerned does not have to be switched on). This means that all bulbs must be constantly monitored for resistance whether or not they are selected. In this case, the warning suddenly came on yesterday morning going over small bumps, at first intermittently but then stayed on. Inspection of the rear lamp cluster soon found that with reverse selected the reverse lamp did not light, but joy was shortlived when a new bulb did not restore operation. Then I found that the other side did not light either. My reasoning about the selector switch is that since a function being on or off bears no relation to the dash warning, that is probably not the problem. And moving the gear stick around did not make any difference. However, the failure of the two sides at once points at a common point like the switch so the two paths of logic conflict! I continue to be mystified. I would love o get hold of the full wiring diagram for my VIN. Haynes just shows a box with ONE wire. Must be two? three? Where does the other wire(s) come from (battery? logic ground? Chassis? Have you been under your car? Was there just one wire? Could my connector have fallen out?)

STOP PRESS! Mike, you are genius! This morning I noticed a side repeater lamp was off. I bumped it and it came on again and the bulb failure warning then went off. You were absolutely right! There were two separate issues! This is obviously what happened yesterday:
1 Noticed bulb failure warning coming on
2 I assumed the reason was in the rear cluster (as it usually is) and found reverse lamps not working.
3 I assumed a common cause. Wrong! The reverse lamp malfunction had obviously previously been present, but as both reversing bulbs had not actually failed I got no warning.
Now the side repeater malfunction caused the warning, alerting me to the absence of the reversing lamps although that was not the cause of the warning.
First I need to replace the side repeater. I can see how to take off the cover (two small screws) but not the actual fitting. How can I do that?
When finished with that I’ll turn my attention to the reversing lamp switch

Now that the simultaneous side flasher fault (causing bulb failure warning) and reverse lamp failure (both sides) have been resolved, while waiting for replacement of the side flasher, I’ll turn my attention to the reverse lights n/w. You say ‘rotary switch’ on gearbox. I know about the linear switch inside the car but I do not recall a rotary switch on the gearbox from memory. Just a small lever. Could the rotary switch be for US cars only or a later model than mine?

Could the rotary switch be for US cars only or a later model than mine?

It is possible that your 88 model has a different setup but I have no personal knowledge one way or the other and I have not been able to determine the answer from the resources at my disposal. As I stated in an earlier post the signal for the reversing lights appears to be fed into the rear bulb relay/failure modules via slate (grey) / light green wires. I would check those next.

First thing I would try would be to select reverse with the ignition on and use a test meter or simple test light at both bulb holders to determine if 12 V was available. Then try a simple substitute earth lead to a good earthing point somewhere near to the lights to rule out an earthing failure. If they still won’t illuminate try moving the gear selector a little bit forwards and backwards to see if you can get them to flicker, if they do flicker or come on you will know it is something under the ski slope that’s loosened off or come adrift.

Under the ski slope is the linear switch. I know that controls the warning beep if the gear lever is left in any gear with the ignition off, but does it also control the reverse warning light in UK models? The North American or later model car owners speak of the gearbox ‘rotary switch’ beneath the car but my jag parts man is fairly sure there isn’t an under-car ‘rotary switch’ in Aus.

EDIT: Sorry! I see I have posted that query earlier! 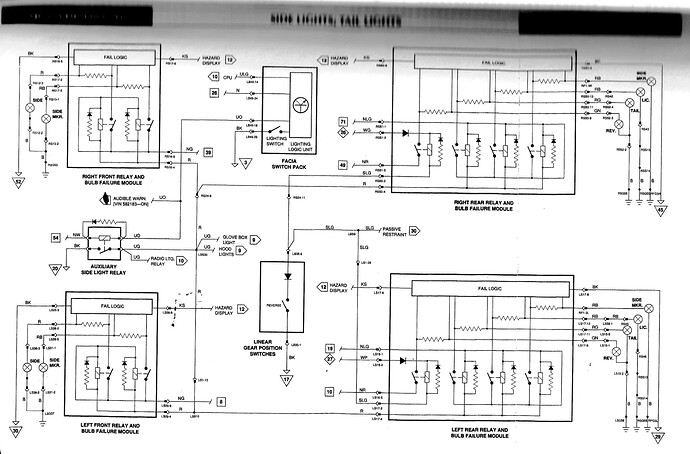 At a quick glance it looks the same as the Haynes schematic that Mike posted.

The Bulb Failure Modules on these cars are NOTORIOUS for erroneous warnings because of hairline cracks in the solder joints. Same problem with faulty VCM displays … cracked solder joints.

Years ago we developed a hack that disabled the BFM system to eliminate the annoying warning light.
Best project I ever did on the car (and I’ve done a ton in 30 years!).

Hi Groove
First, about the BFM problems. Well aware of that red herring! Traced BFWarning to side flasher intermittent, so it is working OK. In any case I have dismantled the BFMs before and resoldered hairline cracks OK.
This morning traced the reverse light problem to the setting of the linear switch (my '88 model does not have the rotary one. About to take off the ski-slope etc. to get at that.

At a quick glance it looks the same as the Haynes schematic that Mike posted.

Gentlemen, this diagram is interesting in that it is NOT the same as the Haynes version I previously posted. We need someone better versed in sparks than I am (Bryan N wherefore art thou?) to really interpret this but here is what I surmise:

It was simple as it turned out. Noted that nudging gear stick restored reverse light (and gear lever light at same time). No wiring issue. Linear switch position needed slight adjustment 1 mm at most. (there is no rotary switch on this model 1988 Aus). Linear switch is critical. Problem solved! Many thanks all!

We need someone better versed in sparks than I am (Bryan N wherefore art thou?) to really interpret this but here is what I surmise:

Your description of the circuit in an '88 model exactly matches the diagram in the JHM1130 CD for that model as Alan discovered.

Thanks Bryan, great to hear from you!

Ditto Bryan, but it’s all solved. Simply a slight nudge to the linear switch!

Although I have solved the reversing light problem, out of interest I did want to look at the diagram on CD JHM1130. I have forgotten how to access files on that CD. Any tips? (W10)

As a computer illiterate, all I can offer is what i do

Load CD in to computer
Click on ‘continue’ when first JHM picture appears
Click on ‘service information’ on next picture then click on ‘supplementary service information’
Click on ‘electrical technical guides’ and the first of some 466 pages will appear
On my computer screen in the top left corner there is an icon which when clicked will produce a table of contents
First select the year you require, select the down arrow and scroll down that untill you find the subject you want to view
Click on that and you will see the circuit diagram for that subject and a list of contents.
(Fig 7 on my CD for the reversing light circuit for an '88)

Unfortunately, just before the step ‘…the first of some 466 pages…’ (after the progress bar shows nearly all of the file loaded) I get ‘We can’t load this file. Something went wrong!’. Clicking on ‘Refresh’ just repeats the message. Tried polishing fingerprints off CD. No luck!