My new to me Series 1.5 has arrived. I’ve spent a lot of time over the past couple of weeks reading many many postings, studying electrical schematics, etc. I thought I had a reasonable understanding of the electrical circuits and the many changes that can be made to upgrade them. Unfortunately, the car has had some electrical modifications done to it and many of the wires don’t match the schematics I have. Hopefully, you can help.

There’s a red and a blue wire that’s coming from the front of the car. The blue wire is disconnected. The red wire is attached to a Hella 003-510-33 relay that’s hanging loose. On the relay the red wire is on the same terminal as a pink wire. On the other terminal there’s a pink wire that runs under what I think is the heater control box and it joins to the battery positive cable. In that same area is a black box that says alternator controls and what appears to be a flasher. The positive battery cable has some broken strands so I’ll be replacing it. Any idea what this relay is doing?

There are 2 relays mounted over one another on the drivers’ side on the splash panel that’s behind the rear wheel. The top relay is only attached by one screw and is easy to move around. On this relay there’s a heavier gauge red wire, a what I’ll describe as a white covered black or brown wire, a red/green wire and a ground wire attached to the single mounting bolt. The wires appear to run toward the front of the car.

The 2nd bottom relay has 3 terminals on it and some of the wires are too dirty to tell what colors they are. I’ll have to remove the top relay to be able to clean the wires. The wires appear to run into the cabin area. There’s a black wire on one terminal, a yellow or white covered wired on another terminal and what appears to be 3 white coated wires on the last terminal.

Can someone identify these two relays for me are for?

The radiator fan is aftermarket and turns on with the key. I know it’s possible that the Otter switch has been bypassed and I’ll do some additional searching.

There’s a relay mounted between the fan and the engine on the upper cross member attached with what look like an original L bracket. I haven’t yet been able to determine the color of the wires attached to it. Based solely on the location, does anyone know what this relay does?

The Lucas alternator has some low quality after market connectors on it. I’m planning on replacing it with a Delco 10SI 3 wire alternator. I haven’t been able to find a new one so I guess Delco isn’t making them any longer. My choices seem to be a new clone or a reconditioned Delco. Any recommendations on what to buy?

I comment without knowing where the Hella relay is so if you post a photo, it would be helpfu and stop me guessing! The Hella relay is aftermarket and my best guess (given it is connected to the battery and not fused) is that it was used to provide power direct from battery to something aftermarket. The way to find out what, is to trace all wires. one of the wires will likely lead to a switch that turns on the relay. Possibly it controlled some aftermarket lights.

The relays on the driver front wheel splash panel are for the alternator and the horn. They are standard with the car.

The relay on the front cross member controls the fan. The otter switch turns on the relay when the temperature reaches the point the coolant needs cooling down.

Is there a problem with the alternator? If not, perhaps put new brushes in it and leave it alone. If a problem, a local shop can rebuild it in most cases. Is there a reason why you might upgrade it?

Dennis - thank you for getting back to me and the information you provided. It helps a lot! The Hella relay is hanging loose near the alternator and horn relay. If one of those relays is for the alternator then what’s the black box under the heater box that says alternator controls? I’ve read many postings about XKE alternators and have decided to replace the Lucas one in order to eliminate future problems with it. I also found 2 somewhat heavier black disconnected wires hanging in front of the car near the radiator.

Hey Rich -
First I want to ensure you’re aware of the search function on the JL site. It will come in handy for sure. If you’re not familiar with it notice the magnifying glass up in the top right corner. If you need help figuring it out, just say so! Half of the challenge is figuring out the right terms to search for!

Here’s a link to a post I found that shows a picture of the relays on the LHS splash shield, and their proper order. Maybe it’ll be helpful for you:

This is the correct location and order for the Horn, Alt and A/C relays: [Relay Order] As for the fan relay, it’s going to depend on whether your car has one or two fans. If it has one fan, then it’s like the S1’s and has no relay at all. If it’s like the S2’s, there will be a plate bolted to the right side of the picture frame. There will be either one or two fan relays there, depending on whether or not you have A/C.

As far as alternators, the 10SI is widely used so I suspect you should be able to find one. I had one in my '68 but it was toast, and I ended up using a 12SI for the better cooling design. I wrote a little about it here, and some of my experience with aftermarket relays and wiring:

Warning: Sit down - long post! Wow. It’s hard to believe two months have gone by since my last update!! It feels like I’ve made a lot of progress but when I stop and reflect, it doesn’t seem as significant as it felt. After I got the engine running I uncovered some other issues that needed to be resolved. Note that I have been able to diagnose and figure many of these things out through the great sources of information on this forum - I have barely used any of my manuals at all (yet). I thank y…

…what’s the black box under the heater box that says alternator controls?

That is the 4TR regulator (Lucas alternators did not have in internal regulator). 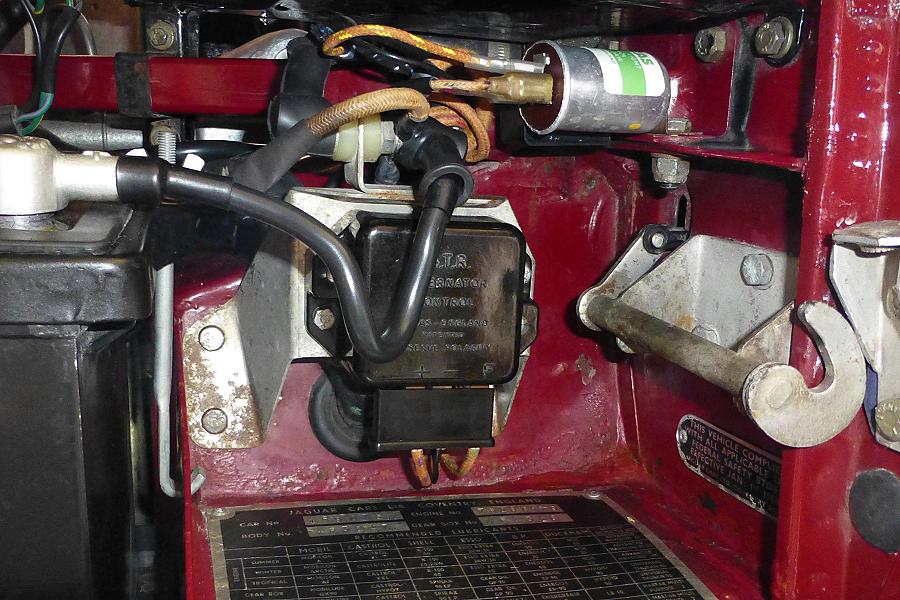 The older ones are adjustable via a screw on the backside.

I have found the Lucas 11AC to be quite reliable though I carry a spare as any part can let you down.

The “flasher” is the 3AW ignition light relay. Don’t be so hasty to replace the 11AC system. It’s reliable enough as long as you don’t have A/C or some sort of high wattage stereo. Keep this stuff stock and enjoy the vintage ride.You will find many pages on both stock and aftermarket alternators in my faqs:

As for your aftermarket Hella, this is stuff that’s tough to work through remotely. Some photos would definitely help.

Thanks to everyone for their responses. I spent more time identifying some of the wires. There’s a 2 post connector near the heater box. One connector goes to the battery and the other terminal has 2 wires on it. One powers the fan which goes on when to key is turned to the on position. I live in FL so the fact that the fan runs whenever the key is in the on position doesn’t bother me. The other wire goes to terminal 30 on a 4 terminal post relay. On the relay ground is terminal 86, a green wire on post 87 and a blue one on 85.

I disconnected the relay but couldn’t find anything electrical that didn’t work. My horns don’t work with or without power to the relay so I don’t think they’re connected. I have 2 cloth (?) wrapped wires handing by the horns but all on the terminals on the horns have wires on them. This is a project for another day.

Pictures of the relay and 2 post connector attached. If anyone has any thoughts please let me know and thanks again for your help. 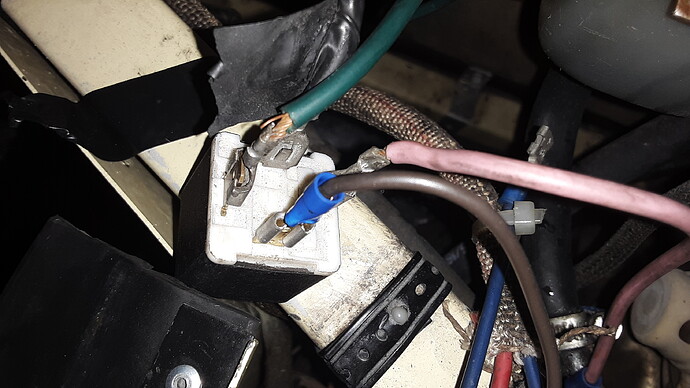 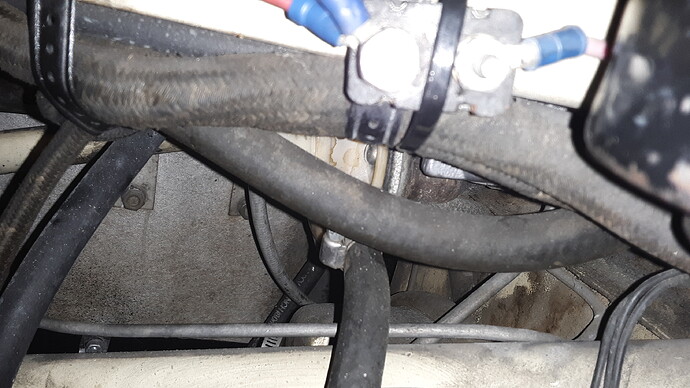 Here’ s the easiest way to figure it out. Disconnect the wire on 30 and the wire on 87. Cobble up a jumper and connect them. Whatever this is supposed to control should come on immediately. Random guesses would be a headlight relay, starter solenoid relay or a fan control of some sort.

My manual transmission is almost impossible to get into reverse gear. All other gears are fine. I read through the postings and have removed the tunnel cover so that I can see the shift mechanism. One of the things I noticed in on the left side there’s a post coming out of the transmission and the part that is attached to it isn’t on all the way and is cocked at an angle. I didn’t want to try and persuade it to go on until I checked with the experts on this board. Thoughts please. 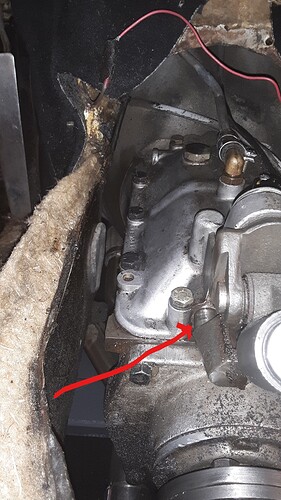 Any thoughts on the above would be appreciated.

The red arrow points to the 3/4 selector rod, so not likely implicated. Reverse gear has it’s own fork on the right side of the gearbox. It rides on a short spindle fixed to the side of the gearbox casing and held in place by a nut over a tab washer. Clearances are tight. Now that you have the cover off, observe the business end of the shift lever as you attempt to engage reverse to determine if the hangup is external, otherwise an internal adjustment issue.

My manual transmission is almost impossible to get into reverse gear.

Do you mean hard to get into reverse as the gears grind when you try reverse, or the lever will not go there?
Tom

Lever takes a lot of pressure to go there as in a very HARD slap.

The hardness of the slap is controlled by the spring pressure on the bolt with locknut. Loosen the locknut and try quarter turns, until you get the reverse slap to your liking. Lubricating the moving parts would be a good idea before doing this, that might be all it needs.

I adjusted it from outside the transmission and lubricated everything. Much better now. Thanks to everyone.

Attached is a photo of the top of the footwell. While there’s some surface rust a lot of what’s there looks like old adhesive. Does anyone know if the car came from the factory with or without a covering on this area? Once I clean it up any reason I shouldn’t add Koolmat or Dynamat to this area? 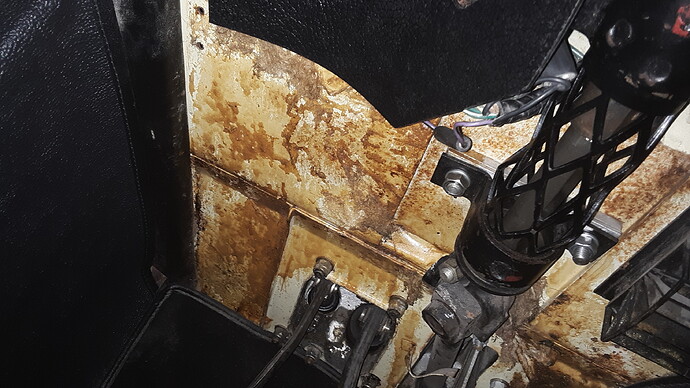 No reason not to I can think of. I did it to mine.

I’m getting ready to install Koolmat in the cockpit. After it’s installed should I put the hemp(?) back on or just place the carpet on top of the Kookmat?

Personally I would not install the hemp. It makes it too thick in places and will hold water if it gets wet.