Hello I just purchased a 1989 V12 XJS Convertible, there are a lot of issues I have noticed on my car so far but I would like to tackle this one issue first. While driving and idling the car has a strong fumes emitting from the car, I sniffed around in the boot no obvious signs, I sniffed around the engine with my nose right up to the fuel injectors, I didn’t notice anything unusual, I continued sniffing around and my left side exhaust (u.s. drivers side) had almost zero smell but my right side exhaust ( u.s. passenger side) had a strong emitting odor, almost alcohol like smell very strong and unbearable, the smell gives me a headache. Can anyone advise me on what can be causing this?

Congrats on your purchase. Yes, there will be a number of issues to resolve on these 30+ year old cars. I just purchased a 1990 XJS Convertible a month ago and have started down that road.

On this immediate problem, it would be helpful to know how the car runs? Does it have power when you accelerate?

Also, when you hold your hand over each exhaust pipe, do they put out the same amount of “pressure”?

I want to say yes both exhaust gives the same amount of pressure, this is my first time driving a V12 so I have nothing to compare too but I will say that the car is awfully slow, I can push the pedal down to floor and it is a slow crawl to 60mph. I first bought it 2 days ago and drove it home. 100 miles on freeway for 2 and half hours. And have been driving around the block here and there, it has shut down on me twice now when I was at idle speed and would only start back up with my foot on the gas. When I do start the car I would say it takes about 5+ seconds of cranking before the engine starts.

Steven,
I see that you are new here. Welcome!

Does your 1989 XJ-S convertible have the Lucas or Marelli ignition system? If you have the Marelli ignition system it is very possible that your car has had a ignition failure on the right side of the engine. Please do not drive the car until this is resolved. It is possible that your fuel is not burning in any of the six right side cylinders. This can be dangerous. A meltdown of the catalytic converters due to this is referred to as the Marelli Meltdown. Engine fires are also possible.

If you haven’t already done so please download Kirby Palm’s excellent “Experience in a Book” from Jag-Lovers (it is free). Kirby has a good bit of info about this. Then search the Jag-Lovers archives for “Marelli failure” and you will find plenty of good info from others who have had this problem before and what they did to fix it.

The Lucas ignition cars have a black rectangular AB14 Electronic Ignition Amplifier at the rear of the left side intake manifold on top. The Marelli cars do not.

I want to say my 4 cylinder toyota truck accelerates faster then the v12. I feel like im going fast in the Jag because of the low ride height but when I look at the speedo and the traffic around me the car is definitely on the slow side. Now sure if that has to do with my harsh shifting transmission

Some more info about the car I can think of, it idles at around 500 rpm. The transmission will stay in gear with my foot on the gas and usually shift at 4000 rpm harshly with a jerk and when it shifts the rpms tach will bounce to around 2000rpm and back up to 3000rpm . I will try to find the Lucas ignition retangular box your referring too, do you have a picture by any chance?

DO download Kirby’s book as Paul mentioned. A wealth of information that you will need.
http://www.jag-lovers.org/xj-s/book/Jaguar.html

Okay so I just drove the car right now. More about on how it runs, it idles smoothly at 500 rpm. I drove with the top and windows both up and the A/C (not cold) blowing and there where no fumes that I could detect. After the drive I put my hands and face behind both exhaust. Both sides had equal pressure from what I could tell. The left exhaust felt like a nice warm furnace blowing and the right exhaust felt cold or not hot. I smelt both hands afterwards and my left hand didn’t smell like much anything but my right hand smelt like alcohol or gas? I begin reading the Kirbys Palm book last night but haven’t gotten too far into it yet. From the picture provided in the link I will say I have the Marelli system

Steven,
I believe that your slow acceleration is because your engine is only running on six cylinders.
It is possible that your crankcase is filling up with the fuel that is not burning in the right side cylinders. This can be dangerous.
If I were you I would not start up the car again until you fix the problem. If your engine oil is contaminated with fuel you may have to do an oil change.

Steven,
Attached is a picture of V12 engine in my 1990 Jaguar V12 Vanden Plas that is equipped with the Lucas ignition system. The Lucas AB14 ignition amplifier is circled in yellow. 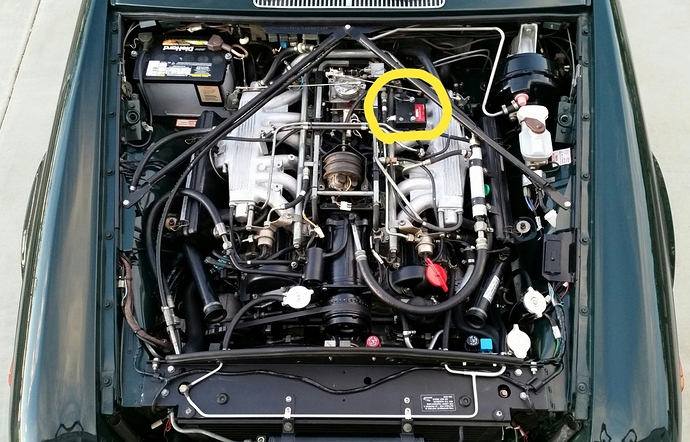 Thank you for the picture Paul , I do not have that Lucas box on my car!

Steven,
Ok, then you have the Marelli ignition system in your car. Attached is a picture of an OEM Marelli distributor cap with the words “Magneti Marelli” cast into the plastic circled in red. If this is what your distributor cap looks like it is an OEM cap. If it doesn’t say this but only says “Made in Italy” then it is an aftermarket cap. The reason that I mentioned that is because some of the early aftermarket caps had problems. 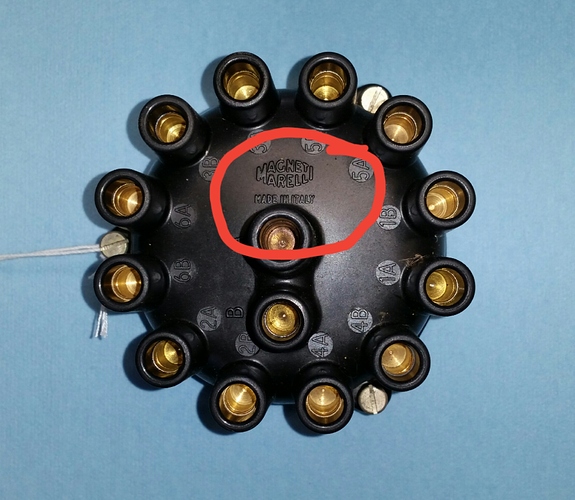 I just checked and I can’t see any markings on my distributor cap other then the different banks and numbers. There Is a piece of tape in the engine bay dated 2011 @ 115k miles. The car currently has 122k miles a couple hundred added by me. I pulled one if the plugs and it was silver in color compared to gold in the picture you posted. I made sure all the plugs on the distributor cap where on tight and I got some play on some of them. 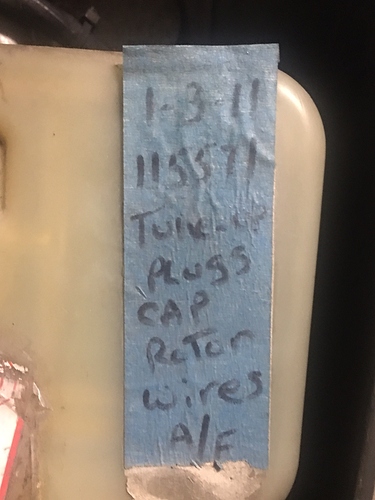 6.5K miles in 8.5 years is about 800 miles a year on average. Sounds like this car sat around undriven. What history do you have on the car other than the writing on that tape?

Assuming the issue is the Marelli ignition, as many have wisely pointed out, the bad shifting could be a twofold issue of a poor vacuum signal to the transmission modulator, and the lack of proper power. Once the ignition issue is resolved, the shifting issue might self resolve.

Just remove the distributor cap and rotor, turn the rotor over and look at the bottom of it.

Will do! I read about the Marelli Issue last night in Kirby’s palm book and one of the users description of the issue mentions the shifting and getting to 45mph matches up with the issues my car is facing. I will have to reread after work today. Regarding Service history the car came with the Jaguar dealer passport service stamp book and looks like the last stamp was in 1994 @ 53,177. There was a sticker on the underside of the hood stating in 2003 the A/C system was converted to R134a by Jaguar and another sticker in the door panel by Jaguar Downey dated 2007 next service due @ 116k. Which from who I bought it said the car belonged to there grandmother that stoped driving about 10 years ago. And then theres that piece of tape dated 2011. Also another piece of tape dated 2012 saying O/C which I assumes means oil change. I will try calling Downey Jaguar later today and see if they have any actual records.

I haven’t searched yet but how do I exactly fix this issue? I will reread Kirbys book but from what I remember I will have to switch over to a Lucas distributor cap? I’m very limited in my knowledge of cars.

The left exhaust felt like a nice warm furnace blowing and the right exhaust felt cold or not hot. I smelt both hands afterwards and my left hand didn’t smell like much anything but my right hand smelt like alcohol or gas?

That exactly sounds like your right bank is not firing, although how it holds a smooth idle i don’t know, although 500RPM seems low (mine idles in P at 800RPM, in D at 700 RPM).

As Paul says, do NOT run your engine anymore. You are dumping fuel into your exhaust. Luckily, since it’s not firing, I guess the catalytic converter cannot heat up and cause a fire? But one spark, and you’d have a fire.

I have a Lucas car, but have read a lot here about Marelli’s. If I remember, you need to make sure both coils are working. And you probably need a new Marelli cap, and need to do the Kirby modification to the rotor. A Lucas cap will not work on your car. Totally different.

And as Paul says, your oil probably needs changing.

Is there any good tutorials out there that can show me what’s parts I need to resolve this issue. I would like to have all the parts available before I start tearing into the car