Roadster Seats in a FHC

Wow ! And I thought the '68’s could be confusing. If it is any solace from a 4.2 guy I think the 3.8 seats either in Roadster or FHC form look cooler than the 4.2 seats. Surprised so many folks say they are uncomfortable. The bottoms look plusher and backs look like they would hold you in better than the later seats. I have never ridden in a 3.8 though.

They do hold you in yes. Kind of cool in that regard. The issue for me is the recess in the seat back. It makes no sense unless you have some kind of dorsal fin sticking out of your back. It causes my shoulders to get pushed forward and my spine to sink in. There is zero lumbar support. Then there is the whole head/neck business. Having been rear ended before I dread it happening in my 3.8.

Then there is the whole head/neck business. Having been rear ended before I dread it happening in my 3.8.

Which is why The Big A(drienne) made the bolsters that went on Tweety’s roll bar.

I WOULD NOT drive a car w/o a head restraint.

So that seems to put to bed another E-Type myth, that the Factory fitted whatever seats they had to hand. They did not!

Just to add a little gasoline to the fire

Here is what Mick Turley said to me in an email this morning. He worked in the factory trim shop but maybe later than the timeframe we are discussing.

"Hi Harvey hold fire with purchasing new seats quite often the fhc was fitted with ots seats if there were no fhc seats in the trim shop the car had to go especially when it was going overseas, this combination is very common the thing"

Not at all definitive from a timeframe standpoint but from a philosophy standpoint, it is an important data point, don’t you think?

Depends what you want to do with the car but it will, unfortunately, always be seen to be ‘wrong’ with those early 10° rake seats. Odd things sometimes happened on the production line but as far as concours goes the Judges will always mark you down and you will not be able to look them in eye and plausibly argue the point. Don’t think you are going to be able to document an exception.

In practice the Factory would be reluctant to fit wrong or out of date parts because of the nightmare it would cause with service replacements.

So that seems to put to bed another E-Type myth, that the Factory fitted whatever seats they had to hand. They did not!

I did the same with the RHD cars going back from mine 860320, and came to the same conclusion.

(It’s a good idea to also check the RHD numbers when checking for information on xkedata, the 860 and 861 RHD series.)

So the other story that goes around about the OTS needing to have “cut-down” Coupe seats so that the top would fold also seems to be a myth if all early cars used the same seats. In any case, the Coupe design was an afterthought for Jaguar, the original car being the OTS.

So maybe the reason for the different Coupe seat was merely an attempt by Jaguar to use the extra space in the Coupe to make the seating more comfortable. Foot wells and dished bulkheads were definitely added to all cars for that reason.

The E-Type seats came in for a lot of criticism from day one so the revised seat design was Jaguar trying to differentiate the coupe and give it more appeal as a viable day to day car. Eighteen months later the 4.2 was released with revised seating common to both models.

Depends what you want to do with the car but it will, unfortunately, always be seen to be ‘wrong’ with those early 10° rake seats.

Oh, after what I’ve learned from this excellent thread, I am 100% going to get the correct seat frames, most likely from MM, and sell my early seats to someone who needs them. A win-win for everyone. You are right, as a concours judge myself, arguing this point would be hopeless, even if they had a 20 degree rake. Thanks to everyone for all the input. I learned a lot.

I learned a lot.

I am most interested in this thread. After 13 years of letting my FHC languish in storage I have finally unpacked it and have once again commenced its restoration. I commiserate with you Harvey on a Jag-in-a-Box! My car is 887030, built in 9Oct1962. It has roadster seats in it and long slides. The Body No. was written on the bottom of one seat, V3974. I bought this car from my aunt in July, 2003 who had purchased it on 16Mar1990. The car was running at that time (1990) and was put into a shop for full restoration. And then the troubles began, but I’ll save the story for another thread. Suffice it to say the entire bonnet and interior was stolen and boxes of hardware. I bought the Jag in boxes. I also bought the interior out of an E-type in Cave Creek, AZ. That car had been stored in the open for abouit 20 years because the owner took it in for some brake work, went home and had a stroke. He lived for 20 years and the car just deteriorated but free of rust. That car was 885766 (V2073). Had I known what it was, I would have bought the whole car! It had roadster seats in it and short slides and I have them. There are some initials on the drivers seat, but no body number. I’ll have to look again at the right seat.

I’d agree with Mr. Langley that 887400 is a good cross-over point for the FHC seats being introduced into the FHC assembly line.

So, I can use some advice as well. As my car has many pieces missing and/or unidentifiable , I do not know where the “packing pieces” (the standoffs) nor where the “spacers” fit. If anyone can tell me what the dimensions of these are and where they go, I’b be grateful. Scottie

Crazy story Scottie. Hang in there! In case you haven’t done so, get the Jaguar Spare Parts Catalog as a reprint from one of the usuals. It is invaluable when you don’t know exactly how things were supposed to go back together.

Yes, the SPC is invaluable and not just because of the nice drawings. The associated text gives you the assembly order and what goes where. There is Jaguar decoder for many of the fixings which gives you screw, bolt and washer specs. Should be on JL somewhere, if not I can post a link.

Here is a link to the Jaguar fastener guide: 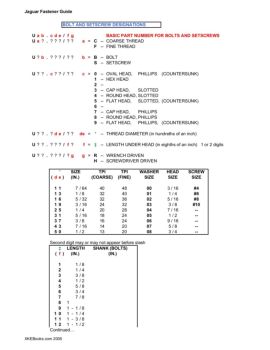 Jaguar Fastener Guide BOLT AND SETSCREW DESIGNATIONS U a b ...

Right. Thank you both. I have the SPC and the combined owners/shop manual. They are the old and new testament! I’m not sure about the associated text. Mine only has diagrams and then a parts listing of those items on the diagrams as well as other parts for that assembly not in the diagram. I do take the listing as the assembly order, but there is much I haven’t broken the code on yet. I’m going to look for that decorder. And I’ll start a thread on my car…the story is far crazier than my brief above…like when the movers dropped a Lincoln Navigator on it! All in all though the car is very nice, painted on a rotisserie, etc.

Oh wow! Thank you Jim. That is something I did not have. I’m pretty good with sorting this stuff out, but sometimes it tries ones patience. Like those tiny screws that hold the fuel gauge in the tank … with the double washers. They are simply #8 UNF which means #8X36. Most folks assume they are #8X32, but that is the coarse thread. Anyway thank you.
Here are pics of the seats out of this Jag. I believe these are 10 deg seat backs, and they are the same in the older car’s seat I have, even though these have the longer slide. You can see the long slide (I only have one) vs. the short slides (out of the other car). The short ones do not fit. Anyone want to trade? 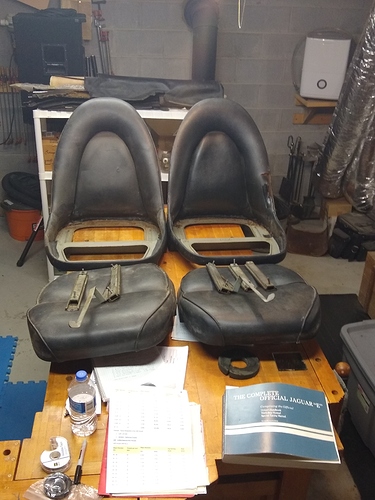 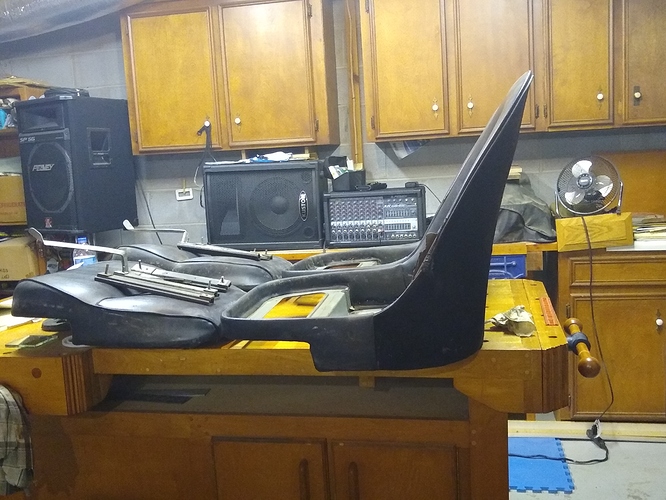 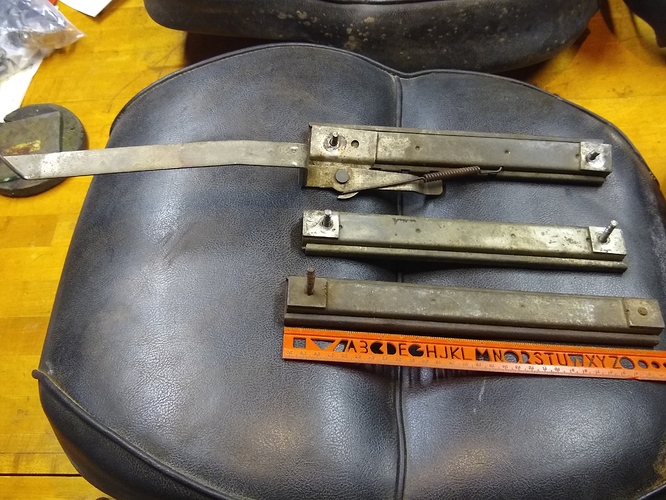 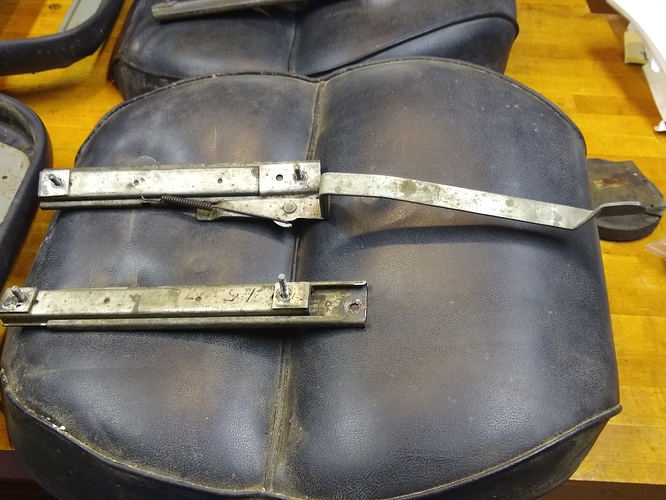 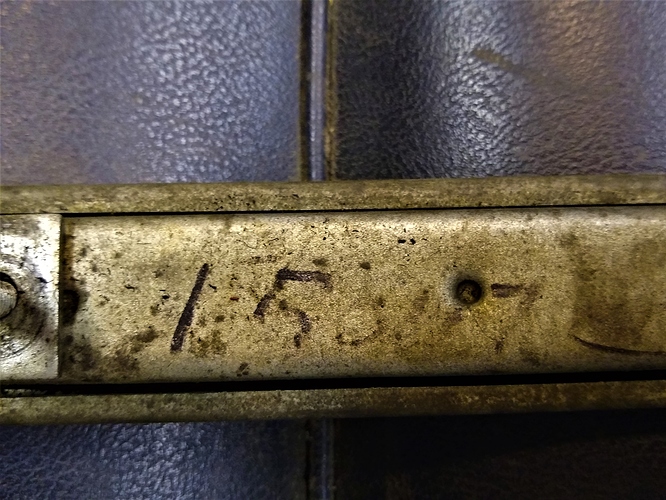 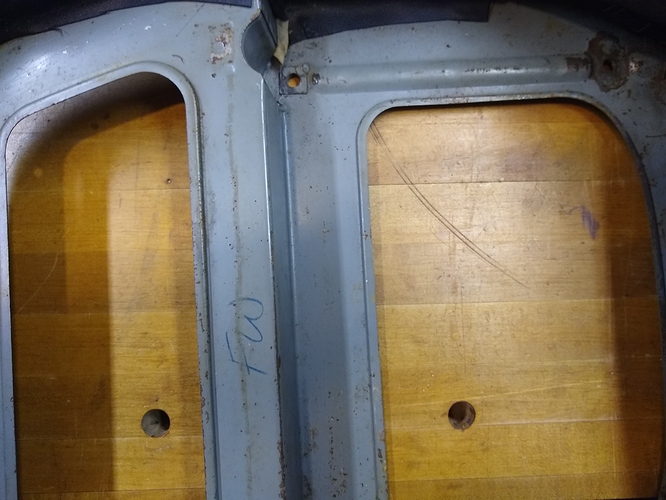