As some of the Forum members may have noticed, I have been quite active with my newly acquired 1989 3.6 US model, Westminster Blue exterior and Barley leather interior. I would like to share a little rolling restoration project description of this car.

I have had previously Mercedes-Benz 1984 500SEC, 1988 300CE, and a 1982 280SL Roadster which I still have. These cars are relatively simple, and like many others I have had a fear of over-engineered Jaguars. However, the lines of the XJ40 have always caught my attention, but for many years I wasn’t too serious about it. However, I sold my 300CE last December. That car served me very well for nine years. I was left with my daily driver Volvo and the summer cruiser 280SL. During the winter and spring, I checked advertisements of the Series I-III and XJ40. Finally I pulled the trigger and bought the XJ40 in June. It had 117000 original miles and a service history.

The previous owner said that when he started to drive the car after the winter brake he noticed that the temperature gauge went over the 90 mark but not up to the 120 mark. He suspected that the car has a head gasket failure and he did not have the time, space and the WILL to work on the car. So, I went to check the car and noticed that the engine was running smoothly. Of course, I checked the body thoroughly, too.
I did not want to drive the car, and it was towed to my home. 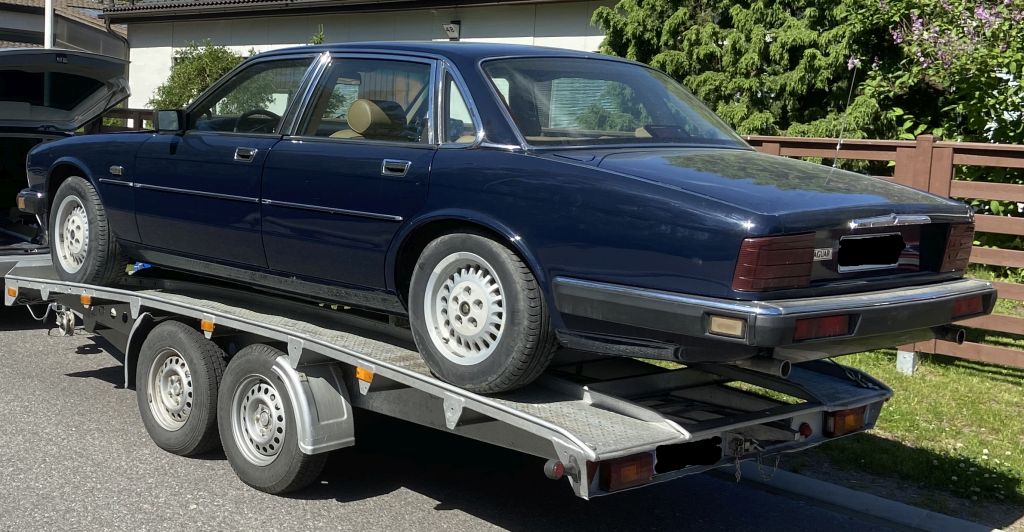 The car had been serviced in an independent Jaguar dealer throughout the years. I went over to the dealer to get printouts of the precise service records. The car has been driven very little during the last ten years, and the thermostat had been changed in 2011. I renewed the thermostat and have not noticed anything special about the temperature ever since. I put the old thermostat to hot water and noticed that it did not open properly.

Soon after I had replaced the thermostat I got the “Tokyo lights syndrome” on the digital instrument pack. I tried to figure it out by following instructions on a French XJ40 site but could not solve the problem. I ended up buying several digital instrument packs. By combining the circuit boards of these packs I finally got a fully working one. Of course, the current pack has my original Central Processing Unit (CPU) which means that the car has the correct mileage.

I have also renewed the spare tyre, painted the plastic cowl below the windscreen, conversed the brake booster system, dismantled the unnecessary oil cooler and HSMO systems, repaired the blower motors, refurbished the fuel injectors, washed all the carpets, and renewed some of the trims in the boot.

I think the car is reliable now. The battery is in good condition, and the steering and transmission fluids look and smell good. However, I plan to renew the transmission fluid and the filter, of course. Additionally, I have ordered in the engine mounts. Overall, I don’t think the XJ40 is that difficult to work on. 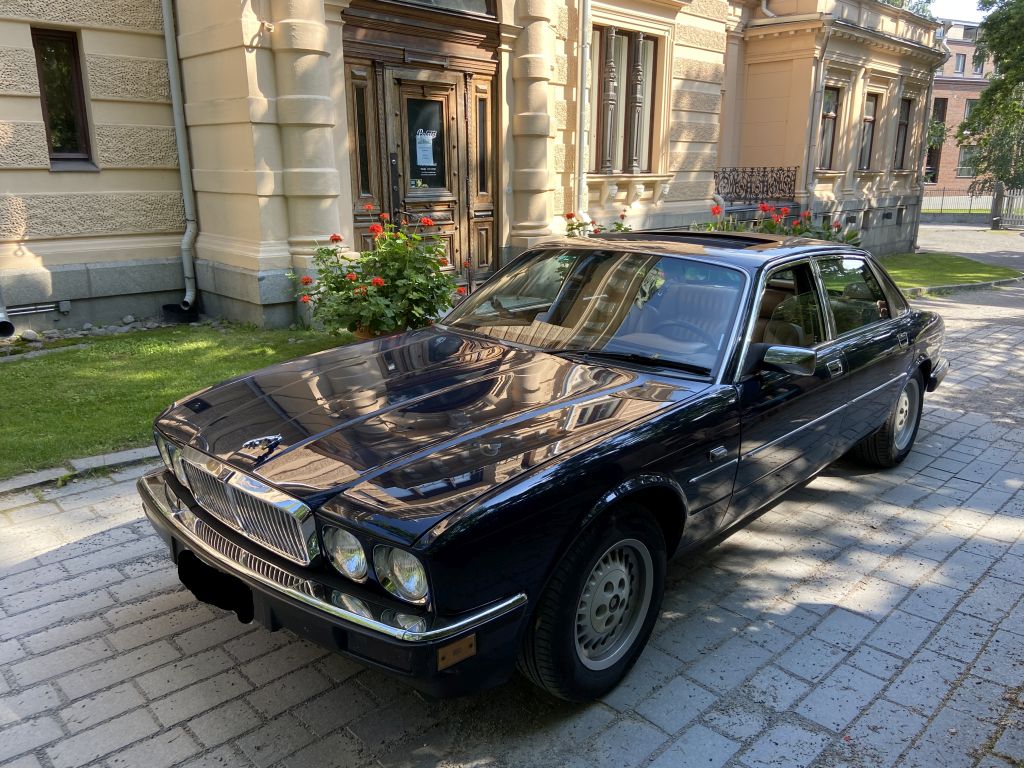 Otto - beautiful car (of course I am biased) and I am envious of the amount of work you have accomplished in 3 months. Well done!

Thanks for your feedback, Mike!
Yes, I have been quite busy with the car. But there is something special with these cars I guess. They just catch you!

Otto, is that Jaguar leaper on the hood (bonnet) legal in EU?

Joseph, it is legal, at least in my country. Is it illegal somewhere?

I think the UK has a problem with it

AFAIK, it was a US thing to install these leapers. No Jaguar car left the factory with it for pedestrian safety.

Door seals are cheap, (eBay) why not renew the whole thing?

BTW, even though it doesn’t seem to make sense at first, driver and passenger side front door seals are identical.

As they become more scarce the XJ40 seems to get more and more attractive !
That’s a beautiful looking car and looks to be in fine condition, especially now that you have sorted most of the niggles. The door seals are not too difficult to change if you can find them. It’s much better to change them whole rather than splice a piece in. The leaper on the bonnet is illegal here in the UK unless it is a spring loaded version but you still see lots of cars with them fitted.

Thanks for your feedback, Casso!
Yes, it seems that the XJ40 gets more and more attention. There was a buying guide cover story in the September 2020 issue of the Jaguar World magazine.

The engine mounts should arrive today. I have already removed the mount to bracket top nuts. The right side nut was easy, but to remove the left side nut I needed to remove all the air filter stuff upto the throttle body.

Don’t forget the “third” mount, the tranny springs and bushes

Larry, to what springs and bushes are you referring to?

I just replaced the mounts. It is not very challenging task, but it takes some hours.

The rear of the engine/transmission assembly is supported by a bushed, double sprung affair - and that bush invariably has crumbled to dust. Sometimes springs have lost their resiliency too. I think it is referred to as the transmission mount.
If you disassemble it make sure to mark position of bracket and bolts.

Before I installed the air filter stuff back, I split the mass air flow assembly to three parts and sprayed carburetor cleaner (which is mostly xylene) to the parts and cleaned the throttle body, too.

I received a used electric fan yesterday. The blade spins nicely. The center hub had some surface rust which seems to be typical for these fans. I cleaned it and painted it first with Miracle Paint and then matt black for top coat. The next thing is to put it where it belongs.

I installed the new electric fan, but it did not operate when I switched on the air conditioning or when the coolant had reached temperature of the thermostat (88 C). Well, the electric fan should switch on if the coolant reaches 90 C. The temperature gets up to 90 only occasionally and if I stop the car to check whether the fan is operating the temperature drops immediately below the 90 C mark. I guess the thermostatic switch, DBC2145, is broken. The switch is no longer available. I wonder if there are substitutes. Here is one, but even if the switch is cheap the shipping cost is 50 $.

It was quite clean inside the port. There was teaspoonful of quite fresh engine oil on the bottom of the port, but otherwise it was clean.

I have now installed back the thoroughly cleaned throttle body. The butterfly was not dirty since I had cleaned it from the other side recently, but now it super clean overall. I checked the clearance between the butterfly and the throttle body wall. I could slide a .05 mm feeler gauge there easily. However, I wanted to adjust it just a little, so, I tightened the adjustment screw very little. I removed and cleaned the TPS, too, but I marked its position before removal. I started the car and now the idle is 1500 RPM. Before it was around 800 RPM. I wonder what could be the reason for this and should I adjust the idle speed by following the instructions on the Ebook.

After setting the gap, reassemble the throttle body and all parts, clamps, wires, etc.

If the static idle is not set correctly, the rpms will hunt around. The computer is only supposed to raise the idle from base due to a load, so if the base idle is not set right the computer doesn’t know what to do, hence the hunting.

My TPS is broken, hence the high idle. A TPS from a 63000 miles car should arrive next week.

The thermostat switch on the radiator is broken, and hence the recently replaced electric fan does not operate. However, when I jumped the wire going to the switch the fan operated nicely. A switch from a 63000 miles should arrive next week.

Winter is coming which means that the car will not be driven for at least three months (December-February).