Hi everyone,
My S1 trans performs faultlessly apart from not kicking down into intermediate. The auto trans guy looking at it is very familiar with Type 12’s, but not the Jag version with electric kickdown. He’s discounted any internal issues in the valve body and thinks it’s the kickdown solenoid. If you operate the kickdown switch, you can hear the solenoid operate, but only faintly, not like the clack you get with an overdrive solenoid. Does anyone have any experience with this, please? Don’t want to fork out for a new solenoid if that’s not the problem. The valve body has been out, new selector seal, O ring around the solenoid, filter, fluid and gasket.
Thanks all.

If you operate the kickdown switch, you can hear the solenoid operate, but only faintly, not like the clack you get with an overdrive solenoid.

**
Disconnect the lead from the switch terminal output on the casing, Kevin - and connect a test lamp between terminal and the block. Turn ign ‘on’ and depress pedal to kick-down position - the lamp should fully light up. If not, try adjusting the kick-down switch until lamp lights up. If unsuccessful, you can of curse test the solenoid, and if that is also OK…well…

I assume the box actually downshifts as it should while driving…?

Thanks Frank, but you can hear the solenoid operate if you operate the switch via the linkage or pedal, so the solenoid is receiving power and operating. What I need to know is whether it is operating properly\fully, judging from the fact it is fairly quiet. As stated, the 'box performs correctly apart from the kickdown function.

Are there any diagnostics in the WSM Kevin, for the solenoid? Coil resistance yada yada. Expect you have the books I have - will look anyway. My S1 kicks down on command - did have to replace the bracket mounted microswitch though.

No, I only have a couple of Heynes manuals which are somewhat mute on the auto troubleshooting front. I haven’t driven an S1 for many years now, but, as I recall, rarely , if ever used kickdown, but I do want it working, if possible. I can use manual select, which works fine. Most annoying is, about 6-7 years ago, I decided to divest myself of all my Jag parts and move into the 1990’s ( XK8), not expecting to need them anymore, and amongst the parts were 3 Type 12’s in good working condition. I never expected anyone would ever want one, let alone myself! I’ve spent more on the upholstery on this car than I got for an S1 12, S1 Double 6, couple of V12 engines, 420 and 3.8 blocks etc, literally a truckload of S1 and Mk 2 parts, stuff that people are now crying out for that I didn’t think anyone would want. Big bummer.

If the shift points are good it is not a stuck open valve or badly misadjusted pressure, so take out the solenoid and see if it’s doing anything, then try to move the valve manually. Maybe there’s a bit of dirt in there (like say a hair) and the solenoid can’t move the valve.

The guy working on it has had the valve body out and checked the area, and found no issues with the mechanical mechanism. He says the solenoid is clicking, but doesn’t know whether that means it is fully operating or only partially, which is why I would like to know whether they click lightly or clack hard like an overdrive solenoid. With the ignition on, I can only just hear the solenoid click if I operate the switch. Maybe it is not fully opening the valve.

He says the solenoid is clicking, but doesn’t know whether that means it is fully operating or only partially, which is why I would like to know whether they click lightly or clack hard like an overdrive solenoid

How hard it clicks is sort of difficult to quantify. It’s not very loud from above if you manipulate the switch. But here is another thought. In a BW12 There is a tiny metal rod that is trapped vertically between the 2 halves of the valve body - IIRC it is not shown in the XJ6 FSM. It’s roughly 10mm long and 1mm in diameter. Location is offset in the hole that the solenoid nose slides into. It’s purpose is to lock the solenoid in position when you turn it (the solenoid). Solenoid nose has a flat on it that allows it to be pushed in past this rod. Anyway, it isn’t shown in the manual so it’s possible that when the valve body cover was removed it got lost (I’ve seen this before).

If that little rod isn’t there the solenoid could be out of position rendering it useless even if it clicks.

Maybe ask the person working on it if he remembers seeing this rod and if the solenoid is definitely locked in position. If the tiny rod is there, the solenoid has to be pushed all the way in with the flat on the rod-side and then rotated to lock it.

Also should mention that IIRC the kickdown solenoid doesn’t actually physically move anything. It’s nose has a valve in it so when energized it opens and directs pressure into the kickdown circuit. That’s why it’s really important that it’s completely locked in and the sealing O-ring is in good shape.

Here the factory manual inclusion. Expect we know all this already per Frank et al. Just describes an “audible click”. 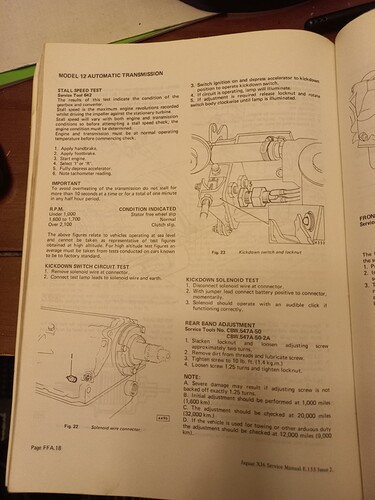 Also the diagnostic section for posterity. 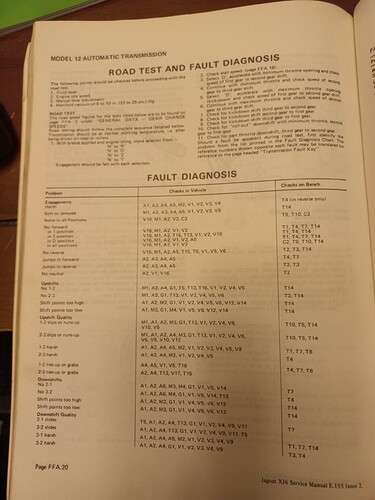 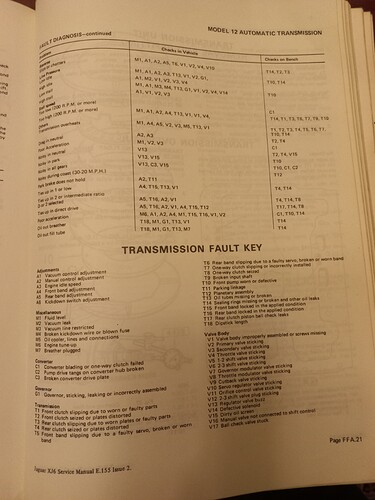 Okay then I was wrong. And it means the solenoid can be removed and fully tested without disturbing too much?

All good, helpful information here Gents, much appreciated. Trans guy said the modulator was seized and the O ring around the solenoid was rock hard, so was confident he had found the issue. I’m not at all familiar with this area, but am going around shortly to see what’s what. I don’t know at this stage whether he tested the solenoid on the bench or still on the car. It is ( Hopefully) possible the switch has high resistance contacts and not feeding the full 12V downstairs, so I will check that, easy to do.
Will keep you posted, and thanks again for the input.

Just been down to check on the car; the solenoid was bench tested with 12v and an air hose. All seemed good so was refitted. Because the valve body needed removal for access, the selector seal was replaced, but the guy says he doesn’t recall seeing the rod Mike mentions, although he was adamant that it looked like no-one had been in there before. He had an exploded diagram and said it looked just like that. All else is good, we checked again and are getting full 12v at the gearbox terminal with the switch operated. He says the solenoid is the only thing it can be, but I’m wary of that kind of diagnosis, replacing something because you can’t think of anything else it could be. Also involves stripping the valve body again. I’m awaiting prices on a solenoid, but unfortunately I’m already in for $350. That would have been acceptable but if it doubles and is still not fixed, I would have preferred to fit my 4 speed manual for roughly the same cost.

but the guy says he doesn’t recall seeing the rod Mike mentions, although he was adamant that it looked like no-one had been in there before. He had an exploded diagram and said it looked just like that.

That little rod isn’t in the Jag manual exploded view but I have seen it in the AMC manual - they also used a BW12 in some cars. Hopefully it was stuck in place and didn’t fall out. It surprised me the first time I saw it since there’s no mention of it. The important thing is that the solenoid was pushed in and turned to lock it when he installed it.

IIRC you can pull the kick down solenoid out once you drop the pan by turning it to position the flat so it clears that little rod and then pulling it out.

I thought the solenoid was the bit poking out the side of the case, but apparently that is just a terminal holder and the solenoid is on the other side, inside, which explains why you can’t hear it loudly.

so the solenoid is receiving power and operating.

It may be external wiring or the switch, and possibly an adjustment issue. The alternative is to open up the patient to have a look-see…

And as indicated in other posts; the kick-down solenoid function is a sort of back-up. Driving at, say 20 mph in high gear and more or less flooring the pedal; the box will downshift by vacuum modulator action irrespective of whether the kick-down works. But the range of modulator downshifting relates to road speed and load is limited - and the kick-down offers a positive downshift outside the modulator limits…

It may be external wiring or the switch, and possibly an adjustment issue. The alternative is to open up the patient to have a look-see…

It’s not external wiring, because 12v is measured at the gearbox terminal, and not adjustment as flooring the throttle operates the switch and the solenoid. Tha patient has already been opened up, apart from actually pulling the solenoid apart, which, I imagine will result in its ultimate death regardless of its current condition. Apparently the vacuum modulator was seized, and has been replaced; I think my next cunning plan is to drive the car and see how it goes. I, personally, can live without kickdown, but if the car gets offered for sale it would need to be operational. Depending on the availabilty and cost of the solenoid, I may just run the car to assess its suitability of converting to manual.

It’s not external wiring, because 12v is measured

Just be aware that voltage measurements with a meter will show 12V even in a situation with high resistance, Kevin. Current, not voltage, is the measure of power…

Not saying that your diagnoses as such is wrong of course…

I would second Franks suggestion, my XJ40 power windows stopped working and checking the switches they were getting 12v but insufficient amps were getting through. Try wiring in a ammeter in line to the solenoid to see what the draw is?

Depending on the availabilty and cost of the solenoid, I may just run the car to assess its suitability of converting to manual.

I’m thinking that for the duty cycle on that particular solenoid the issue is more likely mechanical (including the next action - valve etc) rather than electrical. Hard to imagine one burning out. That said I don’t pretend to know much about automatics.