Hi all,
I’m reconnecting everything after the installation of a complete new harness, following the diagrams and everything is going quite fine.

A thing I’ve noticed is my Rev counter has three wires exiting from its body, and one of them is red, the others are white and green.
Anyone knows where the red one has to be connected? The triple tacho connector on the new harness has not a red wire: only white, green, white with yellow trace. Also the white with yellow trace causes me some head scratching…

Is the red wire to a light? The white wires are 1) from ignition and 2) to coil + terminal. They are continuous within the tach (a 2 or 3 turn loop) but it matters which is which so that the current pulse when the points close is of the polarity that the tach expects. They should go in different directions within the harness (and the one to the coil should be longer). I don’t know the color codes.

Thank you for the feedback Robert.

I also thought that red wires are for instrument lights, but there are already the 2 external bulbs for illumination, as with the speedometer. This red wire goes inside the tachometer along with the other two wires, 1 green and 1 white.

So regarding the diagram attached it seems I should connect two white wires and one green.
My situation is instead the tacho has red green white only and the connector supplied by autosparks for my model year based on frame number has white, white-yellow and green.

Something is mismatched here… 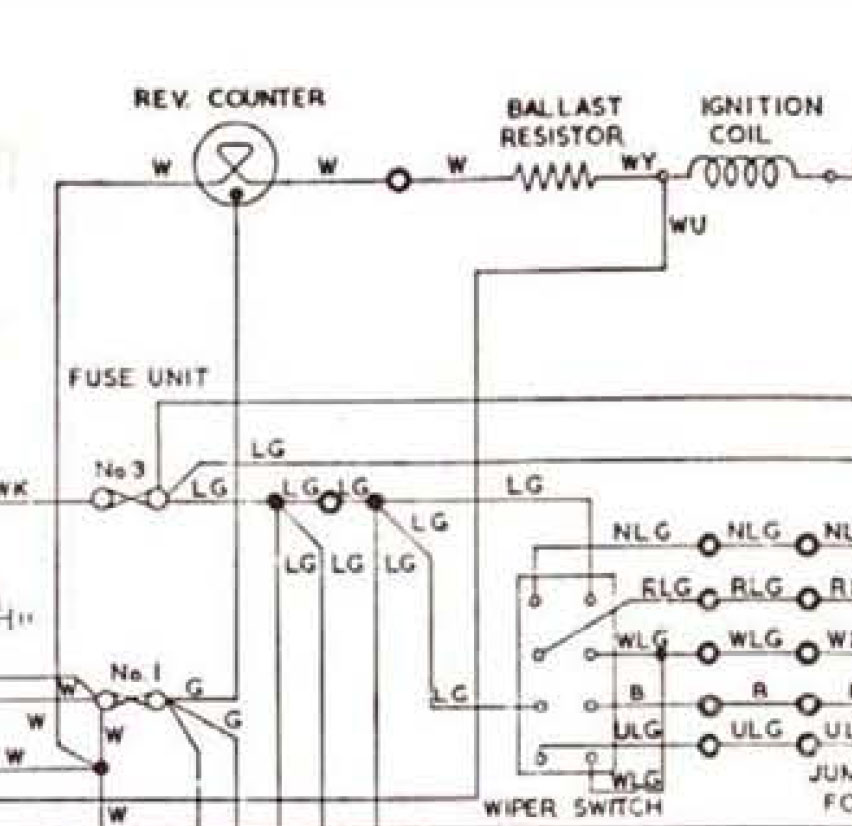 Something is mismatched here…

I’m confused. The wiring diagram you posted matches my tach. The wires coming out of the tach are a few inches long, and all three terminate in a 3 conductor plug, which matches the wiring harness’s matching socket. Two of the wires are actually the ends of a short loop–they are literally the same wire, and are AFAIK white, although they could be any color. You state that you have three different-coloured wires. That’s hard to understand.

I’d try tracing the wires, both in the harness and on the tach. Note that two of the three wires go to the same place–switched 12V. One of them passes through the loop and supplies the coil + while the other one supplies 12V to the tach internal circuitry. The tach case must be grounded, as this is how its circuitry gets its ground (as well as the lights).

What model year did you use for the order, Asa…

The standard set-up for the S1 tacho was indeed white (in), white(out) and green. In this version; whites powered the coil through the tacho, via a resistor (as per Robert) - green was a separate power input to the tacho, as indeed is shown in your diagram. SII had a different set-up, as did the later models’ electronic tacho…

In no cases was red used for the tacho by Jaguar - if those wires, red, green,andwhite came attached to the tacho; tacho is not meant for the ’ Series’ Jaguars. Which does not necessarily mean that it won’t work - but questions arise. A later tacho requires different connections from the S1 - and a different coil connection…

The car wiring harness should have the appropriate colours for the S1 set-up - if the replacement harness does not contain these colours; it’s not appropriate for your Jaguar - or those wires are not for the tacho…

Generally; Jaguar white circuits are powered with ign ‘on’ - white/yellow in ‘crank’ and green is general instrument power. In your case; you have two problems - is the tacho able to drive the coil, and then how to identify and connect the wires you have…

But is this your original tacho…? And has PO made modifications at some stage…?

This is my rev counter with the red wire. It seems like the original to me, but could have been changed as anyway it is not provided with the factory triple connector, the 3 wires have each one its terminal, so there is not an exact position they could go, I forgot to take pictures of it when I removed.

I ordered the harness for late 1973 S1 (they wanted also frame number) and everything else seem right.

I will try to trace the wires, but I’ve noticed that if I put the tester on one white wire, it shows continuity between all the whites wires and also to other colors but with a different resistance, because I suppose they are interconnected at some point in the harness, but this should be obvious (I hope). 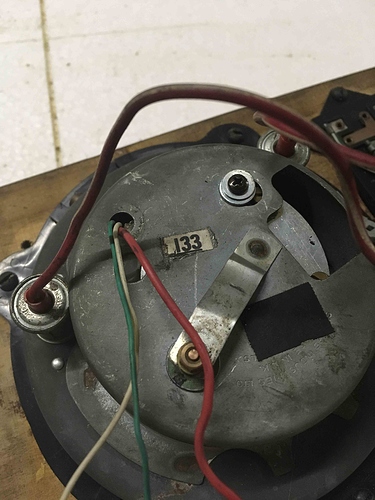 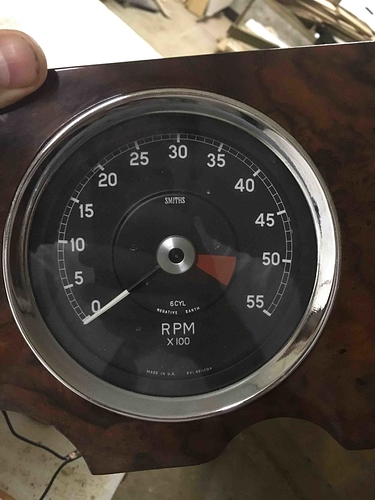 This is my rev counter with the red wire

That’s far from original. It’s probably been modified to work by picking up a voltage pulse directly from the coil or ignition amplifier, as in the Series 3. This is sometimes done to S1 tachs if they are to be used with electronic ignition. I suspect you could figure out how to get it to work, but it would require additional wiring. The easiest thing would be to get a different tach. They are readily available. Most have a black bezel (70-73) but your chrome bezel (68-69) can be swapped to the replacement if you don’t get a chrome-bezeled one to begin with.

There are a bunch of them on the USA eBay right now; here’s what the back looks like: 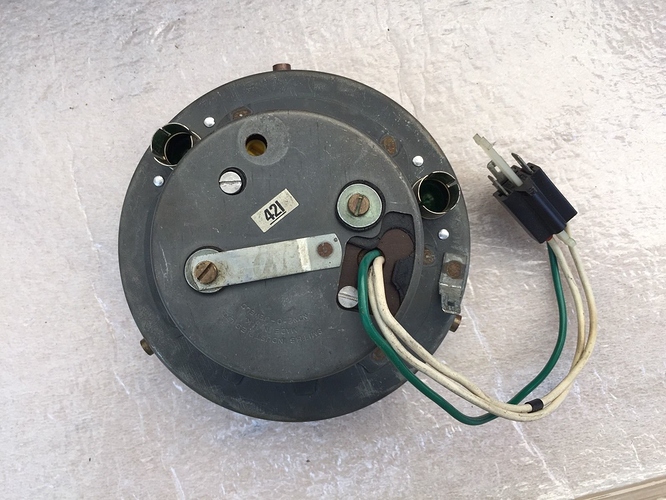 **
I second Roberts points, Asa - confirming that this is not a bespoke Jaguar tacho…

In theory, if the tacho is usable for the ‘old’ set-up; disconnected from the harness, there should be a low, but measurable resistance between two connectors - the two whites. The third connector should have no connection to any of the others, but may show connection to speedo body. If the speedo are the electronic variant; there will likely be interconnections, when ohming, between all connectors - but with various resistances…

Mind you, this tacho testing is advisory only - not really gospel.

Wire colours are there to be used with the appropriate wiring diagram - ensuring the wires are connected to the appropriate connection points. It’s the wires that carry the current, not the colours. I don’t know which instructions came with the harness, but if the colours do not coincide with the Jaguar wiring diagrams; you have a problem - quite apart from the tacho. But not unsolvable…

Thanks all for the thoughts, very useful.

In the next week hope to finish the entire setup, so I can hopefully fire the engine again after 6 months and try different connections to the tachometer. I don’t think it will explode if I mismatch one wire.
Will report what works!

**
You can start small, Asa - by just connecting the ign wire, from the ign key, directly to the coil resistor, bypassing the tacho

The ignition does not require the tacho, of course - and while the ‘wrong’ tacho won’t necessarily ‘explode’; with the ‘through tacho’ coil wiring and the wrong tacho, there will be no ignition. To emphasise, with the ‘through’ type full coil current go through the tacho connected to coil pos. With the latter type; the tacho is connected to coil neg, using the breaker points or electronic ignite to trigger the tacho…

Needless to say; wrong wire connections on any tacho will render it non-functional - and will likely interfere with ignition…

I’m still curious as to the harness wiring colours around the coil though. And indeed if everything now connected up with the new harness actually work…

Just want to mention these discussions continue to help when getting the Series 1 tacho running, even in cars with series 2 engine and breakerless ignition. But no red wire. My tacho has the standard leads. Breakthrough was finding the original unconnected tacho wires using resistance measurement. The ignition switch can play you tricks when doing this since it will earth a wire of the tacho current loop if turned off but produce 12 V on same wire with ignition on. 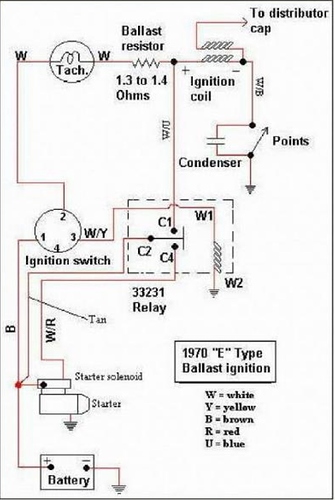 This schematic was the one that got my thinking in a good direction.
With this tachometer its current loop is supposed to supply the 12V to the ignition coil from the ignition switch.
I keep the ballast resistor in series just in case the tacho windings would otherwise suffer from any excess current. I don’t think there is any ballast override relay connected currently but the car still starts as soon as the starter is cranking with the new Lucas DLB198 coil.
In my case no physical breaker points but XJ Series 3 “Lucas AB14” ignition amplifier and breakerless distributor. A PO did a swap for a Series 2 engine back in the 80s after overheating and some more modern ignition stuff came with it. But I found the old tacho current loop wires were sitting idle along with a ballast resistor. I used long wires to resistance measure and identify each wire from tachometer in dash to engine bay. The ignition amp now gets its power from the tacho current loop circuit and pulls the coil minus wire to produce each ignition pulse. The Series 1 tachometer senses the current pulses and shows the RPM. I had no idea if it would at all work out with this mix of hardware but seems it does. I spent hours to study circuit diagrams and reading old posts by those who went before us.

Just for the sake of completeness, there are a couple of connections not shown. The S1 tach has a third wire in addition to the two white ones, It comes from Pin 2 of the ignition switch just like one of the white ones. However, it supplies 12V to the tach electronics. The tach must also be grounded.

I have the S3 AB14 electronic ignition in my S1, and use the standard S1 tach setup without problems. Many have reported erratic performance, though. Just a matter of luck I guess.

As with yours my standard S1 tach works without fault with my 123 ignition (God bless Joey). No modifications necessary.

Yes Robert that is how it’s wired in my case as well.

I have the S3 AB14 electronic ignition in my S1, and use the standard S1 tach setup without problems. Many have reported erratic performance, though. Just a matter of luck I guess.

**
Both points and EI does exactly the same thing to the coil, Robert - makes and breaks coil ground. Current flows through whatever and stops - the main question is if the tacho counts pulses or reacts to current level.

The points/condenser delays the ‘break’ while the EI amp is ‘instentanus’, the latter considerably raises the ignition voltage. One point is that the EI normally normally gets power from a ‘slave’ connection to coil ‘+’, but with coil power (‘+’) routed through the tacho and resistor this voltage inevitably varies with ‘make’ and ‘break’. This may disturb the function of an EI amplifier if connected to coil ‘+’ - a separate wire to the amp will eliminate this.

While luck may play a part with hybrid solutions, other factor may be involved - but apart from obvious tacho malfunctions. how sure can we be that the tacho is actually showing correct rpms…?