Removing both engine and rear suspension from my S2 OTS, with it supported the full length of its chassis rails on my scissor lift, I carefully planned the process knowing that either end would at some point be heavy enough to tip the car.
I supported the rear suspension on jacks whilst I removed the engine. Next I strapped the front of the chassis rails very securely to the lift and removed the jacks from under the rear suspension, All good and very stable. Time to lift the car full height to remove the rear prop shaft bolts etc.
As the lift went up, its wheels (initially directly below the rear end of the chassis rails) moved forward as they do, and just as it reached full height both it and the car started to tilt backwards. Immediately lowering the lift, as its effective base lengthened again, it settled back, but in that split second if I had not been watching I really can’t imagine the potential outcome as both lift and car would have attempted a backward somersault! The attached drawing makes it pretty obvious what would happen, pity I didn’t do it earlier.
Scissor lift tip.pdf (1.4 MB)

Hi Bob…thanks for sharing. …great to hear thay you managed to save the situation and there was no damage or injuries. …as you have found out this type of lift really is an accident waiting to happen…the clue should be haveing to strap the chassis down to the lift…so you was already aware of a possible tipping action…bin this lift and get yourself one with a fixed plate base that can be bolted down…Steve

Even on a two post lift I have encountered similar problems with my XJ40. When either end of these cars are dramatically lightened tipping can happen and a jack of some kind is precautionary on one of the ends.
At this very moment I have the front subframe removed from my XJS and although I haven’t noticed any forward tipping movement, I still keep a transmission jack snug under the oil pan just in case. In the mean time I desperately want to remove the rear cage but I dare not attempt removal of both ends at the same time.

Yes, I had the same issue when dropping out the engine from the bottom with my two post lift…actually stole my sons barbell set and attached it to the front frame rail to counter the engine weight. Can never be too careful. JS

My garage friend has two post lifts and wooden blocks on the ceiling and when it gets critical you can see the posts making contact with the wood and decide if you want to add a transmission jack from below.
I wouldn’t do anything big without these blocks! You never know if the anchor bolts and floor cope.
Very scary, all of it.

I removed the engine and gearbox this summer while mine is on QuickJacks, I put a pair of tail steadys under the rear bumper mounting points for just this possibility. I also put jack stands under the rear wishbones.
Rick 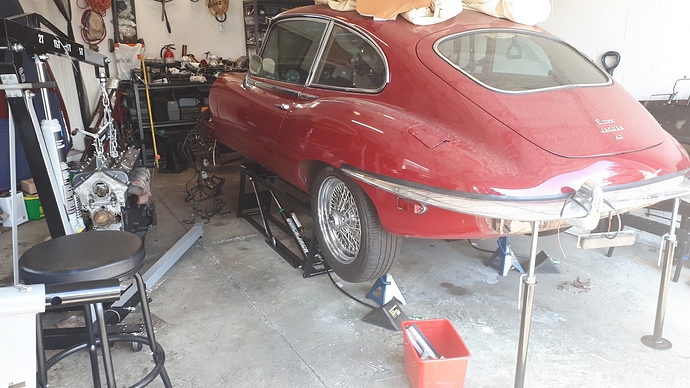 When I had my Testarossa, I knew of a guy that did his engine out in his driveway on a scissor lift. I thought that took brass - you know whats. Just the thought of that would scare me.

Rick, What model Quickjack are you using and are you happy with it for the E? I have a '72 V12 and almost bought one and passed on a good deal for a used one year old one. Kind of regreting it.

And if you have a Lotus Elise, not matter what kind of lift you use, BE VERY CAREFUL: 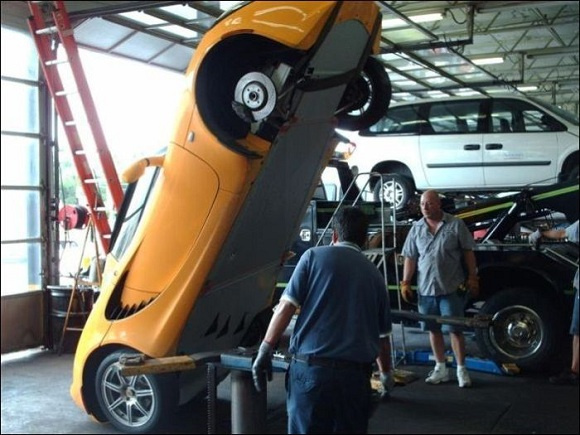 Hi Jim,
I have the 5000XLS and it works good on my 2+2 using the stock jacking point areas.