Scot's IRS Comes together - A Discussion

After I delaminated a set of IRS mounts in trying to pry them into place, I slotted the holes on the IRS slightly so that there would be better alignment and less stress. If anyone knows of a source of correct mounts please let us all know.

It is Marco. Just sitting there. Part of it will slip under the lip and part does not. I just set it there for the picture’s sake and was certain someone would spot it. You got the gold ring!

Bill A. I am sorry to see that there are such issues in our little industry. It’s not like the users aren’t willing to pay for good stuff, right?! That said, I did not want to change out my old-but-unused body mounts and I didn’t want to spread them just to add spacers. I have been very conservative with swapping replacements for originals. Still, back in 1995ish when I bought my first 1963 FHC, you could not buy many parts at all. That worry convinced me to sell the car and that was a mistake. Still I believe we should encourage the suppliers to provide product…just do so at a quality that is usable.

If Bill W. has slotted his mount’s holes and others are using multiple shims to accommodate an oversized part, I wonder if it can all be attributed to the rubber part.

Are the “OEM” IRS mounts currently sold by various vendors oversized as well? i.e. the new “OEM” mounts are not the same size as NOS mounts from the 60’s-70’s.

The U-joints themselves feel good and smooth and about the same amount of firmness. So my plan is to leave them alone.

How many miles have they travelled?
I would change them if I was you.

I really do not want to pull the splined shaft out of the hub!

Why?
Don’t you want to inspect/change the bearings? Are they new?

On the Outer Fulcrum shaft I ordered new seals and probably should have ordered new bearings. I am told by SNGB that the seal is felt? The one seen in the following pics is rubber I believe. So the question, how best to remove the seal?

They are felt indeed. The metal piece in front is a cover and keeps the felt in place, It’s a pressed fit but you can easily pry it out.
Once the seals are out you can pull the inner races of the bearings out. If the outer races are smooth and rust free you can maybe leave them and reuse the bearings.
Take great care to note all the shims between the bearings as they determine the preload.

Hubs - Outer Pivot Bearings. The bearings are in very good condition. Even though there are marks from the rollers, the race surfaces are absolutely smooth, so I don’t think they need to be replaced. [DSC_0182] [DSC_0187]

On the other hand, the felt seals are useless, good only in absorbing humidity and dirt.
Very easy to put modern lip seals.

An other good idea is to drill two hole for vents so the grease can reach the bearings.

Hubs - Grease Vents modification Plugged center vent hole and drilled two holes outside the bearings, as suggested in Kirbert’s book. Now new grease will have to go through the bearings before it comes out from the vent holes and will actually lubricate the bearings. Hole distance from edge of Hub: 7mm M3 x 5 screw Chamfered the holes and added a small O-ring. [DSC_0191] [DSC_0192] [DSC_0224] [DSC_0194] [DSC_0222] [DSC_0223]

All the best,
Aristides

I don’t understand making a correlation between an old compressed irs mount and a fresh new one, and concluding the new one is incorrectly manufactured. Give it enough time and miles and that new one will match the old one just fine.

The metal bracket appears to be oversized on the modern replacements. Not sure how many miles it will take to pound the bracket into the same shape as the NOS ones.

I was told that is the correct replacement” is the usual acorn that is served up.

“We’ve never had a single complaint before.”

I don’t understand making a correlation between an old compressed irs mount and a fresh new one, and concluding the new one is incorrectly manufactured. Give it enough time and miles and that new one will match the old one just fine.

The two mounts used in my comparison were both new, neither of which had been on a car and subjected to compression. The width between the jaws that interface with the Chassis Leg was also considerably wider than the NOS original; that dimension tends not to change with the passing of time. Conclusion; the manufacturer of the new part either doesn’t have a clue, or doesn’t give a stuff.

Thank you Aristides. That is a very thoughtful reply. I’ll look at the citation threads before I comment. But I’ll answer what I can. U-joints that work smoothly and appear to have been greased over their life do not need to be replaced IMO…just my experience and I don’t think the amount of miles is relevant if they are in good shape - these are designed for a million mile life.
The main reason I don’t want to pull the splined shaft is I do not have the proper tool to do so. I am still considering whether I will or not. But I’d need access to a proper tool.

On the Outer Fulcrum Shaft. These are bearing that never see more than a few degrees of motion over their lifetime. Hence bearing use in such a way often experience something like brinelling - divots in the races and flat spots on just a few needles. So when I replace the seals I will take a close look at the bearings; at first glance they seem okay, but I’ll reserve my opinion for now. On the seals, see pics below. Mine are rubber/metal seals that seem quite modern to me. What the supplier sent me and insists is correct are felt seals. I’m not real keen on felt seals but I do realize there isn’t much action or pressure in the area of the fulcrum shaft. I believe some of the references you sent may address this. 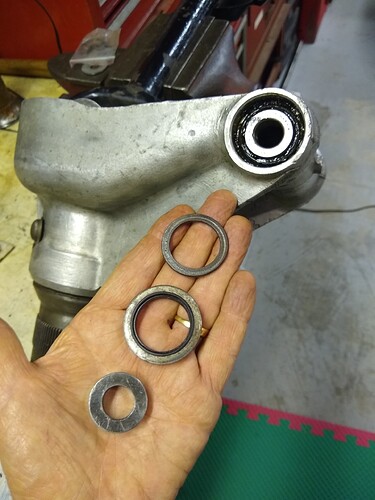 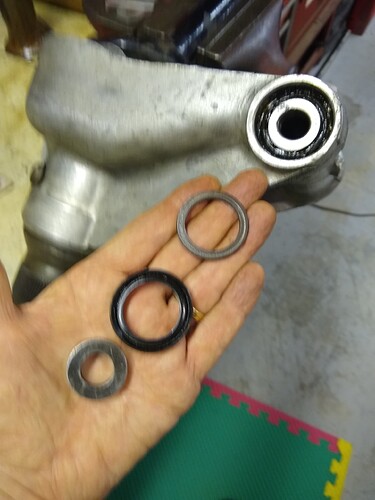 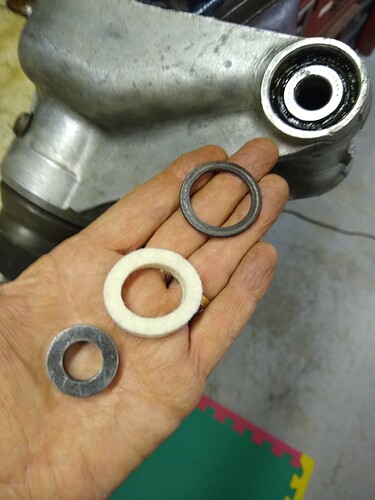 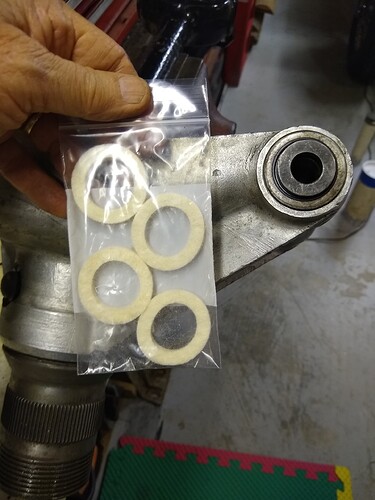 What are folks within J-L doing in regards to the seals for the outer fulcrum shaft?

This is what I used for the outer fulcrum shat in place of the felt seal. $10 on Amazon

Scot I’ll second the recommendation to replace the U joints and rear hub bearings as a matter of course while it’s out. If you need a hub puller your can borrow the Churchill one from JCNA. I bought a different one from Laneside Classics on eBay a couple of years ago and that is what I used when rebuilding my IRS. I would be happy to lend it to you.

The two mounts used in my comparison were both new, neither of which had been on a car and subjected to compression.

Grumpy comment retracted then! I presumed one to be old.

Mine are rubber/metal seals that seem quite modern to me. What the supplier sent me and insists is correct are felt seals.

Your supplier is correct indeed, felt seals is what was there originally.
Someone changed them and put lip seals instead, something that I would consider a major upgrade.
The National 471652 Oil Seal is correct, but I used the SKF CR11124 because it’s Double Lip.
With single lip seals you have to decide witch way to mount them, i.e. with the lip outwards to keep the water out, or inwards to keep the grease in…
The SKF double lip does both jobs.

When I removed my old felt seals they were hard, stretched and dirty, and in no way effectively sealing the bearings from the elements.

Lots going on with this part of the project at the moment. I’ve some difficulties with that snap ring groove on the splined shaft yoke. Does anyone have a lead on a used splined yoke in good shape? P/N 8693.

It’s been a couple of days and I believe I have found a replacement splined yoke. So, change in direction as I will now proceed to open the hubs, replace this part and whatever else I find needs to be attended to.

And another update. I pulled the bearings from the Outer Fulcrum and they all are showing flat spots…brinelling if you will. So this part of the project has turned into a complete rebuild of the hubs and U-joints and who knows what else once I remove the shafts from the hubs. It’s a good thing to do it right. But not what I anticipated with a car that was “totally restored” in the early 1990s and never been on the road since.

I’ve determined to go a different route rather than repair the snap ring groove on the splined yoke. That is to replace the splined yoke and rebuild the hubs on both sides. But I thought I’d show the “fix” I had for the snap ring groove. Apparently this U-joint had been replace in situ and it that process, the groove had been damaged with a hammer and/or punch. The U-joint itself felt very smooth and the wheel bearings also felt good with less than 0.001" of end play. So I made a little tool and actually used it to dress the snap ring groove. Part of the groove was no longer a groove and I was able to re-make that in about 2 hours of hand grinding. A problem I could not fix though was the groove’s top wall was also ruined in that it no longer had a square edge but was sloped up. I didn’t feel the snap ring would be solidly held it its groove, so I turned a washer (on my drill press as I don’t have a lathe) to fit tightly down onto the snap ring that was now fit into the compromised groove. I planned to TIG spot weld this washer to the yoke thereby holding the snap ring into its groove. This process has now been abandoned thanks to all of you and because I was able to find a replacement yoke. 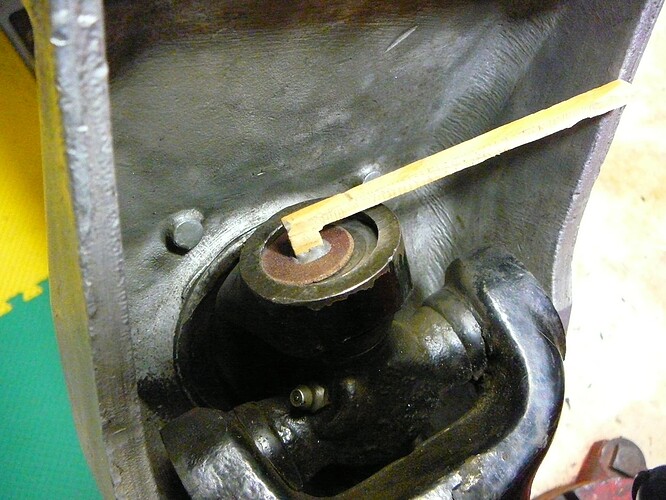 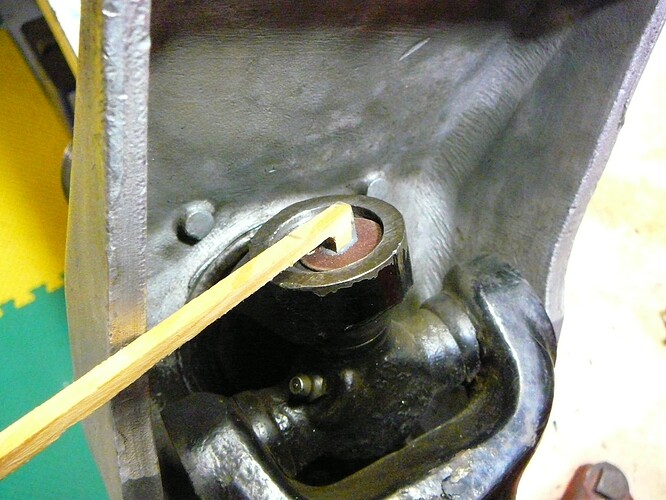 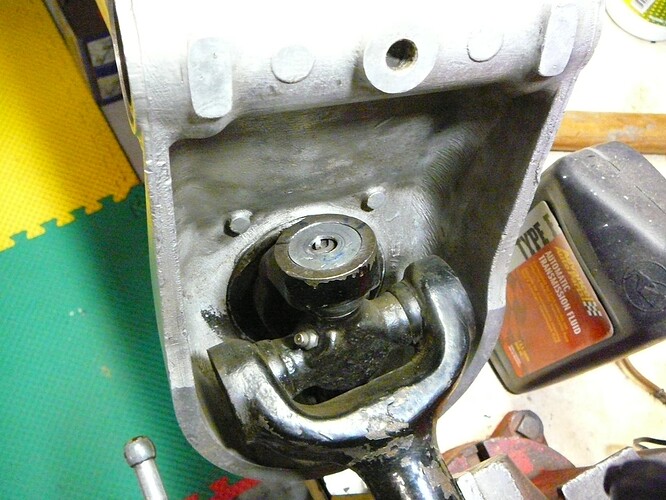 The follow-on to this thread is discussing the Hub and is located here: Rebuilding the IRS Hubs