Seal on the B-side Fuel Line?

Ahoy !
Re: 1992 5.3L V12 Auto-trans
Is there a seal/O-ring needed for the B-side* fuel line where it threads into the fuel rail ?
Embarrassed to say that in the notes I took during dis-assembly, I neglected to document whether or not the B-side fuel line was fitted with a seal/O-ring.
On the A-side there is a seal.

No sir, no seals on any of the ends of the fuel lines, in the engine compartment, of your car.

A 92 5.3 uses the 6.0 fuel rail, so I’ll assume the previous post assumed you had the 75-91 style. On 92+ there is a green plastic seal inside the fuel regulator side… I’ve never had it out, never replaced it. On the other side (return side) I used a couple of green Air Conditioning o rings drone Autozone.

Yup - I did, good catch, my fault. The later green seals work incredibly well even when they appear old and ‘smashed’.

FYI…these days, o-rings, seals are made of butyl rubber or viton., viton being the better choice. Mfgs will dye them with different colors to distinguish between the two materials but also to distinguish between use at various locations on equipment, engines, etc. In other words, the o-ring doesn’t have to be green. It just needs to seal. SD Faircloth

They aren’t actually o-rings, but green Viton olives that deform and crush into the mating surfaces, so
you most definitely want the OE green units. 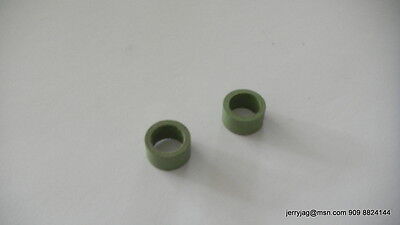 Find many great new & used options and get the best deals for 2 NEW Viton Olives for Fuel Feed & Return Pipes on 1992-1996 Jaguar XJS XJ12 at the best online prices at eBay! Free shipping for many products!

My point being that even post-crush and after years of use, they still seal incredibly well after the fuel lines are unscrewed. This doesn’t mean you shouldn’t renew, but reuse in a pinch, if you don’t have them in-hand yet, generally is just fine.

I’ve never seen a listing for that seal. Bought two sets… Thanks for linking to it.

but green Viton olives that deform and crush into the mating surfaces, so
you most definitely want the OE green units.

Not convinced. The green is merely a color. Has no bearing on the effectiveness. Deform and crush? Why is that good ? Viton appears to be the only redeeming property. I presume it’s called an olive…because it is green, and looks kinda like an olive that has had the pit cored out. ?? The original poster (Richard Cielec) says the new Viton olives he has…which are the same as your items in the E-Bay listing, don’t fit the B bank side of the rail/fuel line ? Could you expand on the installation ? SD Faircloth

It’s called an olive for the same reason there are olives in the exhaust system between two flange fittings - it’s a union - meant to seal.

The late V12 fuel lines were vastly simplified and improved, along with the injection rail, which incorporated modern (standard) clip in injectors, no feed lines to each, and a single fuel pressure regulator that dropped in (shared with a Porsche 928 and a BMW in case anyone needs one, as the factory part is very much NLA).

The fuel line connections for incoming and tank return were also simplified, but rather than using a traditional ball and seat fuel line union, they selected a fitting where the olive goes into the female end and then deforms around the the threaded end to create the seal.

A traditional o-ring would be too short. I don’t believe he mentioned a fitment issue, just the inquiry as to if B bank also had the seal.

So, the “olive” just drops into the female rail fitting and the male fuel line is then fitted and threaded in. Interesting…just a press-in fit.

Richard had mentioned in a private posting to me that the olive didn’t fit on the B bank side. Was obviously looking for a different arrangement in the fitment. Maybe like the olive slipped over the fuel line and then got stuck into the Fem end of the fitting. Which doesn’t work. SD Faircloth www.jaguarfuelinjectorservice.com

Correct - the application was used widely during that time and viton deforms and seals like thread tape on your household nat gas or water line fitting.

You should start making and selling kits to replace the old pre-92 fuel rails with the later 2-piece units. Injectors are then dirt cheap (disposable honestly), and the plumbing seriously simplified.

My shop does quite a bit of pre-HE injection work, and it would be great to update the old race tracks with the 2-piece. HE components can be installed in pre-HE, but the harness connectors need to be replaced with later Bosch styled, etc., as you know.

Hello, All:
I apologise for my delayed response. Urgent, family situation came up.

Thank you, everyone, for confirming that the B-side does take a seal. I’ve updated my notes.
Now, to find an appropriate seal.
B-side fuel line is 3/8 OD; consequently the green olive from the A-side does not fit onto the B-side line. (A-side line is 5/16 OD.)
A short (3/32 -1/8 ?), cylindrically shaped seal (Viton ?) I happened to have (not a green olive) fit on the B-side line; however, its outer diameter was a wee too large such that the seal does not fit into the female fitting on the rail. (As S.D. Faircloth mentioned in one or two posts up).
Solutions I am considering are:

They are two different sizes / part numbers. The link I sent from Ebay includes both sizes. I would suggest you buy that kit.

I got the two olives from the same eBay seller last year. Fits both sides. 1992 5.3 uses the 6.0 fuel rail (injector on rail style as opposed to the short hose between the injector and rail).