Hi all, can’t seem to find any thing via google-fu.
Wanted to check before I tear into things to look.

I find the shoulder belt waaay too low and comes off the side of my shoulder instead of over it.

Is there a higher mount in the b-pillar?

I have the little seat motor bottomed out in the rear of the seat. Which leads me on a tangent q. Is the power seat supposed to move the whole seat down or just the rear? 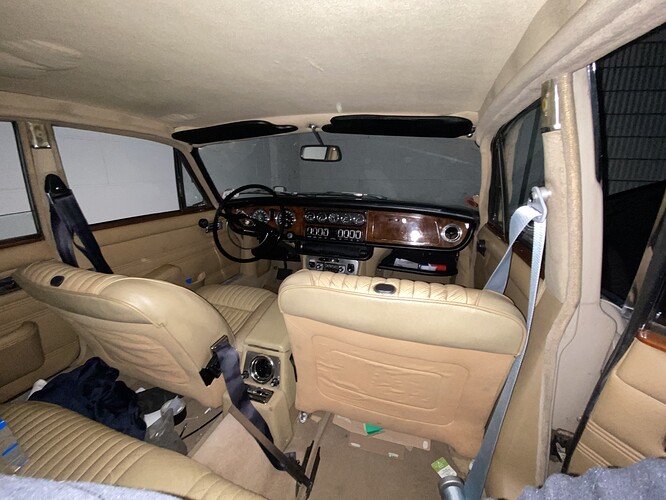 Only one height, never been a problem. I’m 185.
This was during fitting so it’s supposed to be closer to the pillar.

If you only want to get the ‘B’ pillar attachment lower, why can’t you just make a tab to attach to the present mount?
Later cars have an adjustable mount.

I need the mount on the b-pillar to be much higher, I have a tall torso and it’s not partic safe the way it is now

You can look into the pillar and see if you can legally get some mounting hardware. It’s standardized, one thread size etc. and so on and so forth. Or you lower the seat.

The seat motor only lowers the rear from memory. Used to be a common question when I was customer facing in a Jaguar dealership back-in-the-day.

Thanks All, Figured I would check to see if it’s been done before I start taking it apart.
I love my car, but I do tend to feel like a massive gorilla in the driving seat. It has an odd driving position.

my SII car has the original setup, except for the roof liner having been removed at one point. There has been no change of seat layout from SI to SII as much as I know.

Now, I’m very happy with the seat position - which doesn’t mean a lot, as, judging by pictures, I’m pretty much the size of Sir William. Could it be that the disturbing factor really is your seat height adjustment? It wasn’t offered for SI or II cars and on SIII cars it only raised the seat. Maybe someone even installed an XJ40 seat base … With your size you’re much better-off with a non-adjustable stock seat I guess.

I think the height adjustment adds height and is more or less a simple bolt on that can be removed without damage. Worth a try.

The XJ is not huge but I don’t need that much space. I’m used to tinier ‘sports cars’ too.

I’ll take the seat apart this weekend to see if there is any adjustment.
I’m rather amused, as I am only 6’2/200lbs.
You should have seen me trying to fit in my TR6 with the top up

I had to upgrade to a Stag

Brian,
I suspect that a prior owner of your car made an undocumented change of adding a Series III power seat lift mechanism (BAC2693) to your earlier model. Perhaps an earlier driver was shorter in stature than you are and needed the extra lift from the more modern Series III?
In the past I have added the power seat mechanisms from my 3 Series III XJ6 parts cars to some of my other Series III saloons in the front passenger seat locations to match the drivers seat. It is a straightforward modification and one that should be easily removed and returned to the original configuration. I never measured the height difference between a seat with the lift mechanism and a seat without it, but you might get an inch or two of additional head room from removal.

Ahhh … then it makes more sense. For some reason I was assuming you had a SI car. Then, of course, the seat height adjustment for driver’s seat is bone stock and shouldn’t cause more trouble than by its original design.

Maybe you follow Paul’s advice and simply remove the height adjustment mechanism to gain an inch or two in headroom. Another idea would be to get hold of a lower XJS seat - the mountings might work out. - I once drove my Spitfire out of the garage without driver’s seat and sitting on the floor pan. You wouldn’t believe how much difference a few inches can make …