Sorry to raise this again. I have an S1 with the later, shorter spare wheel cover and shrouded fuel pumps, so the factory tool bag will not fit in the spare wheel well as it did in the earlier models, but my car does not have the hoop on the left side of the boot to secure the roll as in later cars. 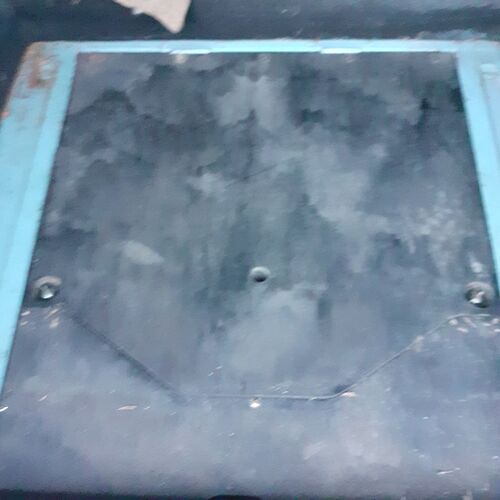 20220712_16425611024×1024 77.4 KB
Given the elaborate tool kits in earlier models, ( Mk5, Mk2, Mk7 etc) it seems unlikely Jaguar would have left the tool bag loose in the boot until they came up with the hoop system, so does anyone have any idea how the bag was retained in these interim cars? The left trim panel has a tab which would suggest it was meant to be easily removed 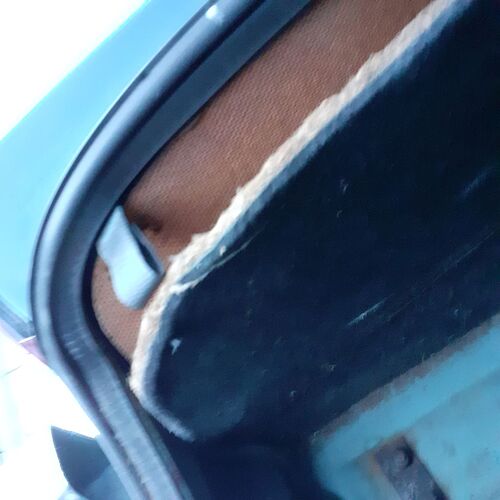 Hi Kevin, the parts manual is not helpful, it does show your type of boot floor and nothing about where to put the tool roll. The fuel tank is behind the panel and there is no space. If there was a second tab it would be a possible strap mount.
I know this doesn’t help and is only pragmatic but I have a box in the boot with some tools and spares, it sits on top of the IRS and I have my tool roll in there. Or you build your own strap if that is there on later cars, maybe someone made some changes.

Thanks for the reply David. I, too carry a proper tool box above the IRS, but I’m just wondering what the factory did in this particular case. I’ve owned a few S1’s and they all had the bracket on the side, but, as I say, surely Jaguar wouldn’t have just sent out a batch of cars with the tool kits loose in the boot. Any indication body number or chassis number as to when the change took place?; it would have required an engineering change as the fasteners for the plywood cover are in a different place. Does your parts manual cover Jaguar and Daimler models, or did the Daimler have a separate SPM?
Thanks.

it would have required an engineering change as the fasteners for the plywood cover are in a different place.

Weirdly, my parts book only shows one type of cover, the later one. It’s a Jaguar only book that covers all three bodies (the original, the pull-air and the disc-lock bodyshell). It’s July 1974.
The later floor will fit all cars I‘d say.

There is no hint in the Daimler SI parts book as to the mounting, in particular no special mold in the spare wheel well nor any hook or loop in the trunk. So, yes, I’d guess you’d either have to “upgrade” to a later style side panel with hooks or be creative …

You did check in the ‚body‘ section?

Yes, just checked and the Dzus brackets are just screwed to the wheelwell channel.

though I’m sure you know this already: 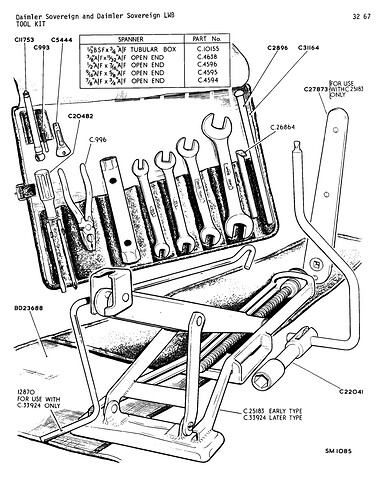 There is no hint in the Daimler SI parts book as to the mounting, in particular no special mold in the spare wheel well nor any hook or loop in the trunk. So, yes, I’d guess you’d either have to “upgrade” to a later style side panel with hooks or be creative …

Thanks Jochen and David. Unfortunately, creativity is not one of my attributes, but I’m sure I can arrange something. I’d be intrigued to know what the real story is, however.
Thanks again.

You did check in the ‚body‘ section?

Yep. The SII parts book shows the hook in the side panel, the SI doesn’t.

Indeed, my Daimler SI parts book indicates July 1974 as well (part no. RTC 9107), and gives no hint as to the mounting of the jack pouch and the tool roll.

Attached shows the parts book illustration of the tool roll for the Series 1 Double Six, clearly showing the strap and fixing which holds the toolroll to the LH sidepanel in the boot area… 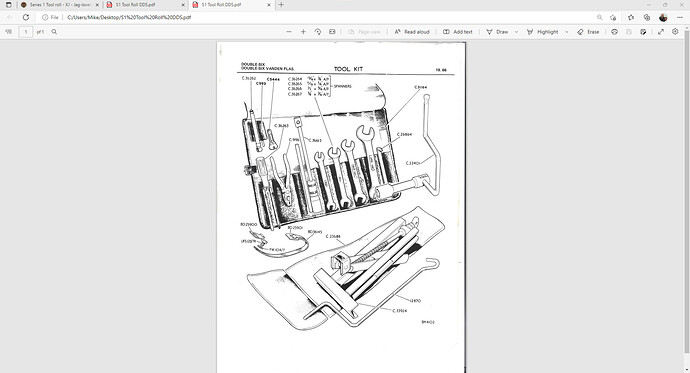 Thanks Mike, but I already know about that. V12s were introduced 1972, my car is 1970 and doesn’t have the metal loop on the side of the boot to attach the tool roll. Earlier cars than mine had the tools mounted aft of the spare wheel above the petrol pumps. My car seems to be between the two systems.

Slight update. There is a car advertised for sale here in NZ that has a rego plate 13 numbers prior to mine, so the 2 cars probably arrived on the same ship. It has the earlier type of boot\tool roll arrangement. That said, its chassis predates mine by some 140, so it is possible my car either had its boot arrangement altered at some stage, or the cross over took place around the time the two cars were made. Nothing definitive as yet. Car for sale is a piece of S^%^t with a V8 conversion and plenty of rust. Would be worth having as a parts car, but it lives in a different island, so not worth the freight cost.