My series 2 OTS occasionally will not turn off when the key is returned to the off position. It will continue to run as if the key is still on, and with the key removed. After maybe 30 seconds the car will turn off. This is not running on, or dieseling, it is as if the key has not been turned off.

Unless there is some sort of ignition relay I’m suspecting a bad switch, but it feels normal and the problem does not occur every time, but is getting more frequent, and taking longer to shut itself off.

Thanks for any help and replies

What does the dash volt meter do when you turn off the ignition?

I have not looked at the electrical schematic, but I think that if the alternator relay is slow to turn off (and de-energize the alternator field), when the ignition key is turned off, the car could still run.

If it were me, I would first open the ignition switch and clean and check it.

I would start car with toggle switch on. The car will run and alternator will show to be charging battery on volts gauge.

Thehe I would turn off the car with the ignition switch. IF the car runs on, I would then flip the toggle switch on the new wire. Should the alternator relay be the problem and be defective and not close quickly, this will stop the engine.

I had the same trouble with mine, but it accompanied the switch getting extremely hot. I’ve been ruling out other issues with mine so I just decided to replace the switch. Fairly easy and inexpensive to do.

This sounds like a good candidate if the problem continues after cleaning the ignition switch. I had a TR6 years ago and it wouldn’t turn off with the key after replacing the alternator. The electric shop instructed me to install a resistor inline to the alternator power and that put an end to it. A faulty alternator relay would do the same thing.
Thanks for the replies. I’ll report back when the problem is fixed.

I’ll have to look and see. I don’t usually pay attention to the voltage gauge.

I went ahead and cleaned the ignition switch which was quite grubby inside. Then I took off the alternator relay (same as the horn relay) and it looked very new and shiny. I took the can off it and it was very clean inside. So maybe cleaning the ignition switch will fix it, if not I’ll be running a toggle switch to the relay to further look for the problem. 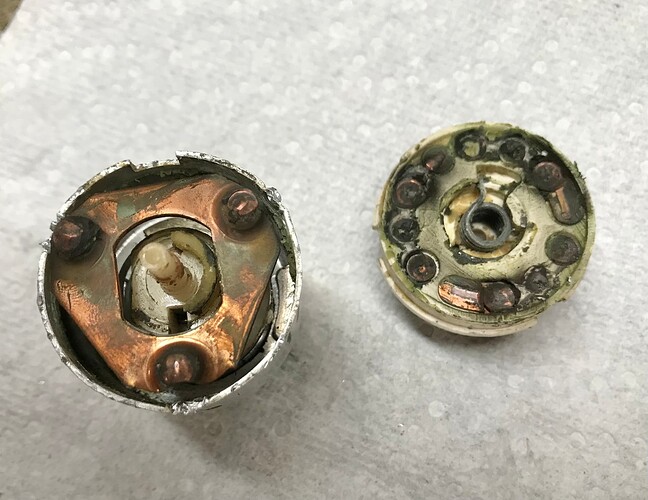 Trying to resolve a “no start” problem. Thinking it was the starter I went ahead and replaced it with a new gear reduction one which I always wanted to do anyway, but still won’t start. Just getting a single click from the starter relay.

So now I’m thinking it could be the ignition switch. Its a Feb. 70’ model.

I purchased the electrical portion of the switch to replace, but looking on how to remove the back portion has me stumped. Would help if I could remove the entire assembly off the steering column but it appears that a tamper proof bolt is holding it in place. 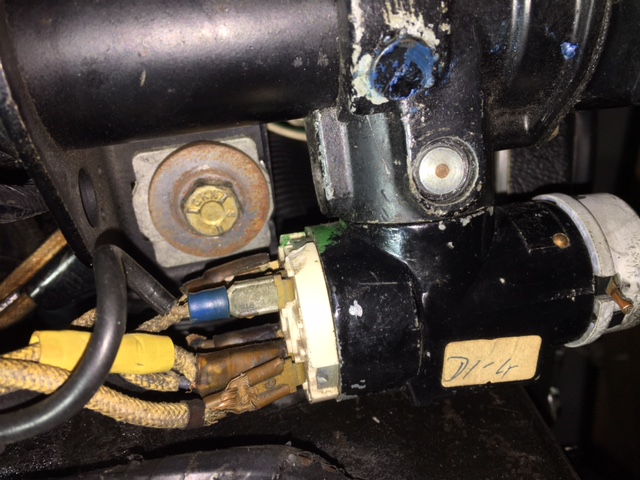 Any advise would be appreciated

Yes, that is a tamper proof bolt and the head has been sheared off to make it so. The bolt is a 1/4-28 and I used a socket head cap screw instead of the tamper proof bolt when I replaced mine.
To remove it, you’ll need to drill out the bolt. I don’t believe it is hardened.
Mark the center with a punch, drill using a 1/8" bit about 1/4-3/8" then tap in a screw extractor and remove the bolt. It should come out without too much trouble.
There is one small set screw holding the switch in place in the Britax lock, and I believe it is on the side of the lock/switch that is not accessible with the britax lock in place, thus the need to remove the lock.

To remove the tamper-proof fastener just use a Dremel cut-off wheel to cut a slot and back out with a screwdriver. My preference over drilling.
Glenn

Just getting a single click from the starter relay.

So now I’m thinking it could be the ignition switch. Its a Feb. 70’ model.

David, thank you for your reply. One of the first things I did when got the no start issue was to replace the starter relay with a new one, after which I replaced the starter, but to no avail. Would you be kind enough to tell me how I can test if there is 12v on the output terminal of the starter relay? Us architects know a little about everything but not an lot about a single subject like electrical trouble shooting issues.

Electrical problems are often the most difficult to resolve on such cars because the electrical wring may have been modified by a previous owner in an undocumented way. Let me try to step you through what to do:

First check that the relay has power on the C2 relay terminal, by measuring the voltage between that terminal and a good ground - eg a bolt in the area. Assuming that you have power to the relay, to test the relay is working, temporarily remove the W/R wire from the terminal on the relay, and connect a multimeter on the DC volts scale to the relay terminal you just removed the wire from, with the other probe of the meter to a good ground - eg a bolt in the area. When you operate the ignition switch to the cranking position, you should see 12v on the meter. If you don’t, then the relay is faulty. If you see 12v on the relay terminal, reconnect the W/R wire, and repeat the test at the other end of the W/R wire which should be at the starter itself.

Hope this helps. Let us know how you get on.
[PS: If you don’t have a multimeter to measure DC voltage, a test lamp can be used instead]

Thanks for the reply and patience. The new starter is a Nippondenso gear reduction starter. I reconnected the cable coming off the battery to the large screw-on terminal along with the cars existing ring connector from the 2 wire harness… The other wire from the harness is a female connector which I then connected on to the shielded black cover over a male spade on the starter…

The starter relay is located next to the windshield washer bottle on the firewall and it got replaced with a Lucas SRB400 (Relay 26ra) which superseded the original Lucas 33231 which would then make this a later system.

Got a chance to check the voltage coming off the C2 2 terminal at the ignition relay and a got a 5.5 volt reading, and not the 12. Not enough to start the starter? I also tested with a test lamp and it did light up. Not sure what this could mean. Battery was fully charged. Ignition switch issue?
If anyone could point me in the right direction would be much appreciated.

Following up on the previous post, since I already had a new back switch for the ignition I went ahead and removed the old and installed the new so as to take the ignition switch out of the equation… However, the designation on the new switch at the connectors reads 30, 15, 50 and R whereas the old switch read 1, 2, 3, and 4 with the 3 terminal having two wires connected on the double spade.
IMG.pdf (306.8 KB)
total of six wires connect to the switch:
1 black
4 yellowish (2 of which were connected to the #3 post)
1 brown /beige
there was one more brownish wire which was taped over by the PO which I suspect was the wire to the key buzzer.
Can anyone assist on the correct connection on the new back switch?

Got a chance to check the voltage coming off the C2 2 terminal at the ignition relay and a got a 5.5 volt reading, and not the 12. Not enough to start the starter? I also tested with a test lamp and it did light up. Not sure what this could mean. Battery was fully charged. Ignition switch issue?

If you really only have 5.5v on C2 of the starter relay I doubt it would light a test lamp either. Either way, this can have nothing to do with the ignition switch if you car is wired as per the Series 2 1970 wiring diagram, as C2 gets it’s power from the battery and doesn’t go via the ignition switch. You should find that the voltage on C2 is 12v all the time, independent of the ignition switch position. The wiring diagram shows C2 of the starter relay getting it’s power from the “fat wire” terminal on the starter, but as I understand it you have replaced the starter with a gear reduction starter, so I don’t know how you have wired that. As I mentioned in an earlier post, many electrical problems on these cars are difficult to trace because changes have been made from stock - this may be the case again here.

Following up on the previous post, since I already had a new back switch for the ignition I went ahead and removed the old and installed the new so as to take the ignition switch out of the equation…

Instead, it appears that you have added another variable to the equation…