Sick to my stomach

While I have been working on my Series 2 FHC, it has been getting a bit dusty in the garage…to be expected. Today while doing something else,I happened to glance at the bonnet from a different angle with the dust now beginning to show and I saw a dent (outward protrusion) which caused me to first get sick to my stomach, then to rush to open the bonnet to see what the heck happened.

The location of the dent appears to be located above the radiator area, which until recently had a foam covering over it. I have no memory of anything that could have caused this, but it just makes me sick. 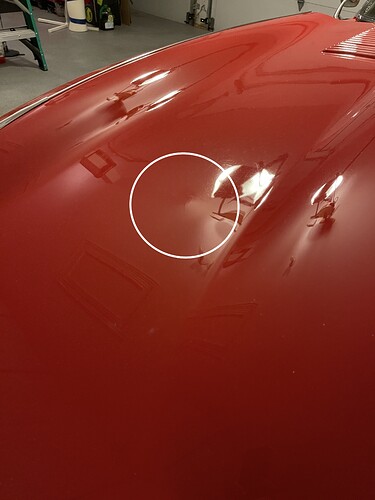 A buddy did exactly that to his E-type that was identical to mine, waaaay back in 1974, we were in high school. Mine was freshly restored so I’m very glad it didn’t happen to me tand use that moment to this day when I close anything on hinges. His had 9 year old paint still in good shape, but far from precious.

We put a thin layer of padding on it and very carefully leaned on it with the butt of a screwdriver. It took about an hour but we got that lump to lay completely flat and except for a very small break in the paint was almost impossible to find. On the final pass I pressed the area on the inside like a donut and he rocked back and forth on the lump.

A little thought before diggin in and you’ll be fine.

Not worth getting sick over something like that. Just be happy you have an E type.
I dropped some conduit pipe on my e type a couple years ago and left a small dent. I just laughed and called myself a stupid cun! and carried on with whatever it was that I was doing.

Saved me the electrons! Paintless dent repair place will make that disappear. 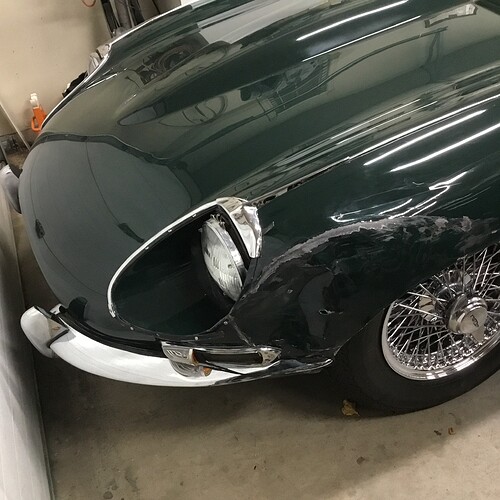 Oh my God, that is terrible. I take back my sickness, that would make me sick.

Back in 1970, my uncle who introduced me to Jag’s was driving his 1968 Series 1.5 FHC on a road that was a blind winding curve, it was winter and the roads were a bit slippery. He came around the corner and there was a boulder that had fallen from the hill side. He crunched the front of his bonnet on it so bad, that the Jaguar body shop ordered him a new bonnet from the UK because they couldn’t repair his. Because all the bonnets being produced back then were for full new cars, he had to wait nearly a year for a bonnet to be produced just for him and then put on a slow boat to Pennsylvania…

Same problem occurred on my 140 bonnet. A local paintless dent removal technician came to my garage and made a flawless repair (as long as the paint hasn’t been broken)for a very fair price.

Possibly it has been there all along - you might review earlier photos to see.

Mine came to me with a pair of those dents - obviously someone had tried to jack up the front using the radiator support bar which easily bends and pushes the corners of the radiator into the bonnet. 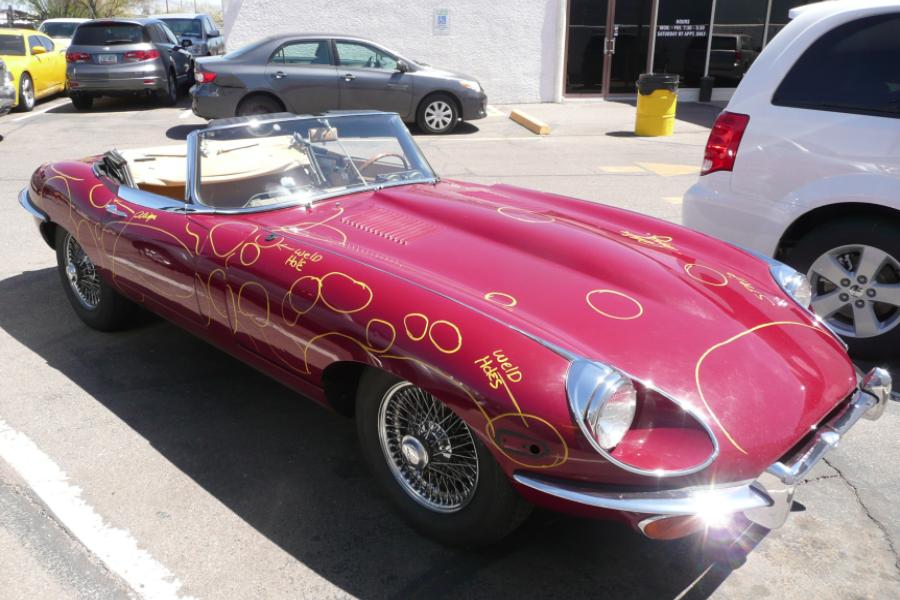 Some gal had even carved her name in the paint: 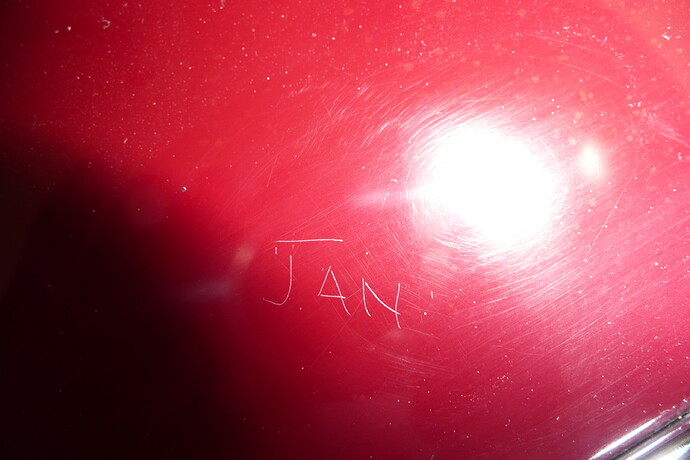 Consider it your ‘good luck’ dent - a talisman against future incidents.

he had to wait nearly a year

This won’t take nearly as long to get right. Pretty straightforward repair actually.

Sh*t happens. And anything in life that’s fixable isn’t serious.

And anything in life that’s fixable isn’t serious.

I recall a home builder who told me ‘It’s not a mistake if I can fix it… and I can fix anything’.

Hello Nick,
That should just about buff out.

The Boss is reluctant to drive the FHC becasue she is afraid of my reaction if it gets damaged on her watch. I tell her it’s just a car, it can be fixed, no big deal. I don’t think she believes me.

. I tell her it’s just a car, it can be fixed, no big deal. I don’t think she believes me.

Here’s how ya convince her: prang the wing on a tree, then fix it, easily.

I have a pair of those, one on each side from a PO jacking the car up using the radiator support. Been there the whole 33 years I’ve owned the car, just don’t see them when I’m driving it. For me the metal is stretched, so no paintless repair, I’ll just deal with the next time I break out the paint. Anyway, good luck with it.

We drive the most beautiful car ever made.
A little blemish or two.?

We still drive the most beautiful car in the world.

I have a pair of those, one on each side from a PO jacking the car up using the radiator support. Been there the whole 33 years I’ve owned the car, just don’t see them when I’m driving it. For me the metal is stretched, so no paintless repair, I’ll just deal with the next time I break out the paint. Anyway, good luck with it.

After I wrote my initial post about being sick to my stomach, I broke out the flashlight to investigate under the bonnet for the cause of this dent. I knew it wasn’t there before when I waxed the car. As I was under the bonnet trying to determine what had caused the dent in that vicinity, I got the an even sicker feeling as I realized what I had done.

The night before I started the brake job last week, I decided to go out to the garage and zip tie the hard wood block I had for jacking the front end up using the picture frame. That night, it was late, I hurried more than I should have and I mistakenly zip tied the wood to the radiator support. The rest of the story you already know. I have been beating myself up all night about it.

The trick now is to straighten the radiator support and get the radiator to sit back down a bit. Once I have the car out and about, then I will summon a paintless dent repair guy to do what he can to make it look less noticeable.

Bob;
Confession is good for the sole. There isn’t a one of us that work’s on their own car that hasn’t done something like that. It is in the cards.