this was on a corvette brake parts vendor tech site: about new calipers and master cyl parts: Q: It says the use of silicone fluid will void all warranties; why?

A: Something has changed with the formulation of silicone fluid which affects the seals in the calipers and master cylinders. The rebuilder will NOT warrant leaking brake parts that have been exposed to silicone fluid.

A well known U.S. vendor who, among other things, re-sleeves wheel cylinders issue the same warning when the cylinders are returned.

Without doubt, this was true of the original DOT5 formulation. When first available, I used it in my 63 Corvair, with all new cylinders, and many of the seals leaked. Others had the same experience, and the problem was traced to the absence seal swelling, which was/is promoted by glycol-based fluid.

I’ve not tried silicone again, but it is my understanding that swelling agents were added to prevent seal leakage. Might the current warnings against silicone be left over from the old days?

I’m still using silicon brake fluid from “old” US Army supply stocks here in Europe on one of my cars. After having replaced and rebuild the Girling brake and clutch system, I filled the system with this Silicon fluid. That was in 1988!!! Never had any problem with the brakes nor the clutch operation.

Is this fluid different from the modern silicon based fluids (DOT 5)? Or were the original rubber seals of a better quality? 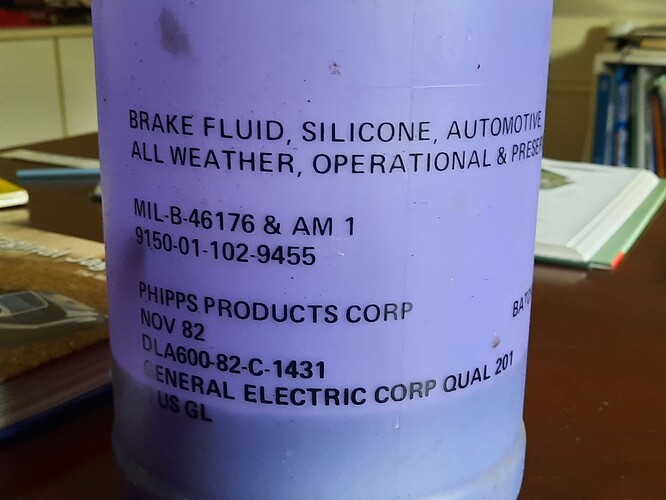 the caution I saw is current, for Corvettes, and not likely a left-over. It was just restated by the vendor. No explanation with it…maybe there is something to be found on the web. Nick

When I had my E-type’s pots and cylinders sleeved by White Post more than eight years ago they said their warranty would be voided if I used DOT5. But since I supplied the rebuild kits that were labeled DOT5 compatible I used It anyway without issue, replacing it every three years. My only objection to it is its expense. Like $50 a litre.

Wow, it used to be pretty cheap.

Yep, the controversy has been going around the internet ever since the rec.autos newsgroups beginning in about 1992. Some people swear by it and some swear at it.

I use it roughly 25 years now on both of my cars the XK 120 and the E-type Series 2 . Never had any
braking troubles . I change it every 5 years . Two reasons are decisive for me . No corrosion because of water in the system and no negative effect to the car paint . But I must say the brakes feel a bit spongy .
Martin ( S673454 )

I’ve tried silicone on only a couple cars 3-4 years ago but the spongy feeling was more than I expected and more than I was comfortable with. I’ll allow that other factors may have come into play…but I’m not anxious to try it again, personally.

The sponginess is due to silicone being more compressible than glycol-based. The compressibility increases with temperature–not a good thing for emergencies (or racing). IMHO.

I did use silicone fluid for a while 10-15 years ago, but had two fluid-related near failures which put me right off. I persisted following the first because I liked the idea of no corrosion, but on stripping the system down found that the corrosion just moves to a different part of the system, unless you have it 100% air-free.

I don’t think silicone brake fluid is permitted in British racing series, not sure.

edit - found this on a Lotus Seven forum, makes sense to me as it describes my experience pretty accurately (although no explosions!):

‘Do not be tempted to use Silicon fluid in your Seven. Sure it does not absorb water but moisture will get into your calipers and master cylinder, with conventional fluid the small amount of moisture will be absorbed into the fluid slowly degrading its boiling point. However with silicon the moisture can lurk in the calipers in small droplets and when you work the brakes hard these droplets will boil at 100c and expand rapidly into steam. Its not uncommon for total loss of braking and even small explosions using this suff. From my own experience the silicon fluid has a thicker viscosity than standard fluid and this makes bleeding the system even more difficult than normal. Its also very difficult to rid your system of silicon fluid once you have put it in. If you want a good high performance fluid try Castrol SRF its expensive but less hydroscopic than most other high performance fluids.’

About 30 years ago when I did the first restoration on my XK (early steel RHD) I thought silicone would be great. Seemed much more susceptible to heat expansion as the brakes applied themselves as everything warmed up. Let the car cool, and all was well again. Got rid of the silicone and all was well until the spat fell off which started the second restoration 12 years ago.

“No corrosion because of no water in the system”

If anyone believes this statement, then, they have never understood how a braking system operates.

All braking systems normally operating on DOT 3 or DOT 4 have a connection with atmosphere through the reservoir, if at any time (nearly always) the atmospheric conditions are water saturated, condensation will be present inside the reservoir. This condensate may not mix with DOT 5 or DOT5.1 but it will separate and corrode interior surfaces. So, DOT 5 fluids do not prevent corrosion.

In June 2019, I wrote the following on a Rolls-Royce / Bentley forum, which is self-explanatory.

“…….There is enough evidence Worldwide to show potential incompatibly between brake seals and certain fluids. In practice a vehicle may be converted to Dot 5 and fitted with compatible seals operating without trouble, except for say long pedal travel issues. At some point along comes the mechanic, or the next owner and some brake hydraulic parts get replaced and/or Dot 4 added to the system. The scenario is that the original source of many of the parts and particularly rubber type seals cannot be traced and the rest is history as brake seals fail.

One very well-known case in various circles was when this happened to the R-R car previously used by the prime minister of Australia when Dot 5 was in the system and the rubbers swelled up.

If an injury or fatality occurs through brake failure with a car using incompatible brake fluid, no insurance company I know will fully cover that event. Incompatible here means also when any rebuilder’s instructions have been ignored. In my experience rebuilders of brake parts are very wary of Dot 5 fluid and nearly always wisely state a case of voided warranty if it is used. On a more personal note, a Coroner would not be too impressed neither.

Next, XXXXXX mentioned…. “as the US military and NATO have been using it for years”

I am afraid that is incorrect……my experience with armed forces tells me that the US Army, although initially supported development of Dot 5, very, very, quickly back pedalled on that issue. They did not take well to having some 4000 to 5000 trucks disabled at one hit. (Tip….when you are in that deep you put them all down a stripping and rebuild line to change the affected parts).

Having worked as a consultant and engineer, not only on USA equipment but also in Russia I can tell you their Armies and Air forces all use Dot 4, with good reason. If you doubt that then consider that one hour ago I spoke to maintenance at USAF deliberately and they confirmed my data….they use Dot4!!

I have witnessed a Dunlop 22 inch diameter disk brake (you think you have big Dunlop discs!) used on a Chieftain tank slewing brake lock up when the calliper jammed (same calliper as Jaguar) on a Dot 5 test. No good for any Army, let alone NATO.

It boils down to the fact that if you are 100% happy with compatibility issues you might use Dot 5. If on the other hand you know and have seen first-hand the problems, you will not be going anywhere near Dot 5.

Your mileage may vary……

GM used a bellows inside the reservoir cover which is vented to the atmosphere through the cover and completely seals the fluid from air intrusion. The bellows expands as the fluid level drops to prevent the reservoir from negative pressure.