Hi, I decided to replace my distributor cap and leads (I did purchase a new rotor arm but it was a cheap and nasty version so I decided that the old one was way better and left it in place). The leads are Rists and the cap is original Jaguar part (both from SNG). All was great on my first couple of drives and I’m convinced that there was a definable improvement. But, today I went for a drive and the engine was lumpy and the tick over was not good. So I set about trying to find the problem and after checking the timing with a strobe light I couldn’t even see the 8 degree mark at all! I didn’t have enough adjustment on the normal adjustment bolt, so I had to slacken off the collar bolt (excuse my terminology) and rotate the distributor until the timing mark was exactly 8 degrees. I think that the engine is running better than ever - except a very small flat spot which happens when the accelerator is first depressed. After that there is a huge amount of power. What do I do to get rid of the flat spot and maintain the power thereafter?

I also checked the mixture using colour tune which is in spec.

On my cars if I tune to the Colortune I usually find I need to be 1/4 to 1/2 a turn richer than “ideal blue” on the Colortune. Also check the air balance, to close out, given all you have done. Finally contact the Distributor Doctor and get a couple of red rotor arms - they have DD stamped on them - accept no imitations. Paul.

**
The color tune do not take into account the dynamics of the carbs, Robert - your carbs may be running slightly lean? To avoid flat-spots carbs are set to run a bit fat…

However, it may also relate to ign timing response - vacuum advance regulation…?

Thanks Paul, I’ve sent an email to the distributor doctor and I will try a slightly richer mixture tomorrow and I haven’t balanced the carbs for a while either. Frustrating that the performance is the best it been since replacing the dissy cap and leads.

Hi Frank, the vacuum advance appears to be working fine, are you suggesting to advance the timing slightly?

Thanks for this advice Carl. I will check the damper (will have to check my manuals on how!) but would the engine run so well at higher revs if this was the cause? The ground cable ‘down under’ - where is this please?

Got it! I know the cable and I will check. Also will check TDC on number 1 against timing mark. Might be a day or 2 as I’ve things to do.

Okay I accept that I’m not a car mechanics oily rag, I do know this and I’m totally in awe of what you guys know and what you can do with XJ’s. This is going to seem to you to be totally stupid. I have managed to ascertain that the timing marks on the car appear to be correct by taking the spark plugs out, and with very great effort, turning the engine by gripping the fan belt on both sides and rotating the crankshaft until I can see TDC on number 6 by inserting a screwdriver on top of the piston and watching for the maximum amount of upward movement. I then slackened the bolt on the collar of the distributor so that the points open on number 6 at the correct time (static timing?). BUT when I then needed to tighten the said bolt it had moved round and there is no way on earth that any spanner that I possess or have ever seen will fit anywhere near the bolt. I would have to remove the power steering, front suspension or the bottom hose of the radiator. I have third degree burns on my arm from trying this yesterday on a hot engine and scrapes and cuts today trying it on a cold engine. Is this car trying to tell me that I just ain’t cut out for this car? Anyway I have called in a mobile mechanic in the morning to see if he has more success than me (bet he will know how to do it!).

I do have a Haynes manual but all it says is “tighten the distributor clamp plate pinch bolt”! How?

As I say, not a good day on the XJ6 front, BUT on a more positive note (and much more importantly) I did learn today that I don’t have cancer so I shouldn’t moan should I? LOL

Great about the diagnosis! The adjustment bolt (a pinch bolt) should remain in relatively the same place because the clamp itself is fixed to a flat surface on the block by a short 1/4 UNF bolt. Most of us have some “special” spanners: either cut down or bent to deal with problems like this one. I will try mine tonight and see what it is/was that I do. Paul.

Thanks Paul, on mine the bolt rotates with the distributor as I said, I don’t understand where the 1/4” bolt would fit? It’s a difficult job as you have to get a small socket up from underneath the engine with no clearance between the bottom hose and the distributor itself - and that assumes that the bolt is presented at the correct angle in the first place! When it’s not it’s an impossibility.

This is an eBay picture of what my three Jags have to retain the distributor. The hole on the flat section accepts the 1/4 UNF screw. It should be just visible looking over the off side mudguard. I am able to work from the top to make any adjustments to my distributor. Perhaps make sure you have the pictured clamp (or not!) so that we can help you further. Paul. 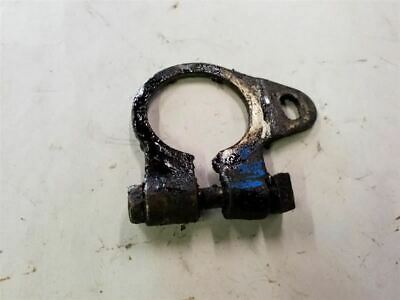 the vacuum advance appears to be working fine, are you suggesting to advance the timing slightly?

**
Not until you have set the carbs, Robert - the more likely source of a flat spot. And as said by Carl; verifying that the pointer does indeed is at the TDC mark with #6 (front) piston is at TDC…

With static timing you set the engine to 8 deg BTDC using the pointer. When setting the timing by checking when the points open; you can use the ‘cigarette paper’ test - or use a test lamp. The cigarette paper is held by the closed points - when they open; the paper falls. The test lamp is connected between the coil ‘-’ and ground - the lamp lights up as the points open. Judging opening time by other means is not precise enough…

As Paul says; the clamp plate is supposed to be a separate item, and can be moved independently of the dist - or vice versa. Also; before setting the dist; set the vernier to the mid position - to enable the easy vernier adjustment either way for fine setting…

Yes, Paul I believe that I have that same plate underneath my distributor. I have have attached a couple of photos which shows some details but as you will appreciate, it is not an easy area to photograph. 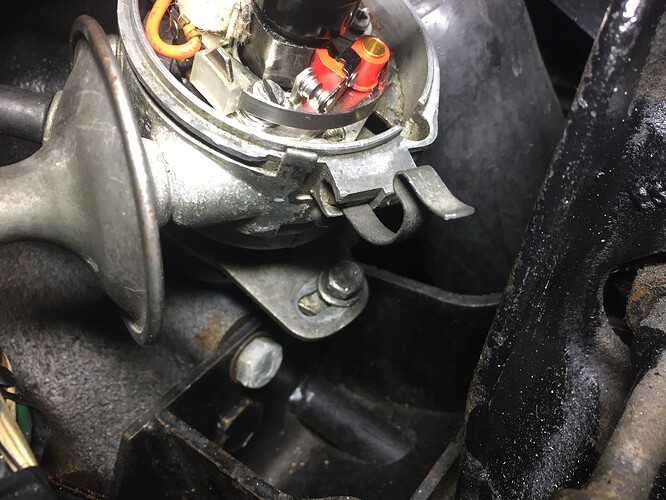 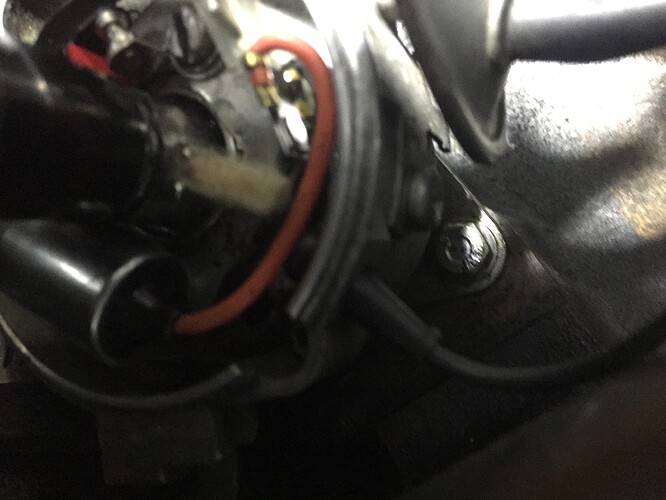 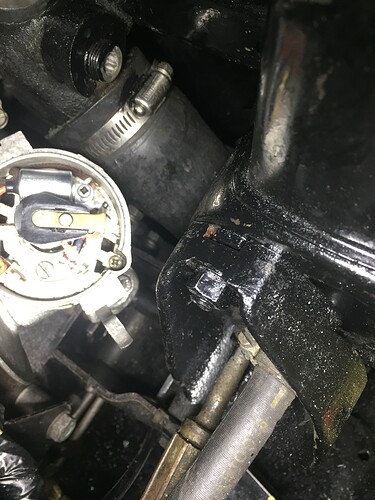 All present and correct. I tighten mine with a small open end spanner, flipping it at each movement. FWIW. Paul.

congratulations to your diagnosis, in the first place - I’d probably take a bottle of champagne and an ice cooler to the workshop, enjoy wrenching, and even the burns … and cool them with the ice cubes from the cooler! Congratulations also to the first and important steps you took to fix the problem about the timing! At least you took all steps as described in my ROM. By now you know a lot more about the ignition in your car than your mobile mechanic will, I bet.

I’d try to confirm the parts you find in your car. Unless I missed something you should have a Lucas 22D6. 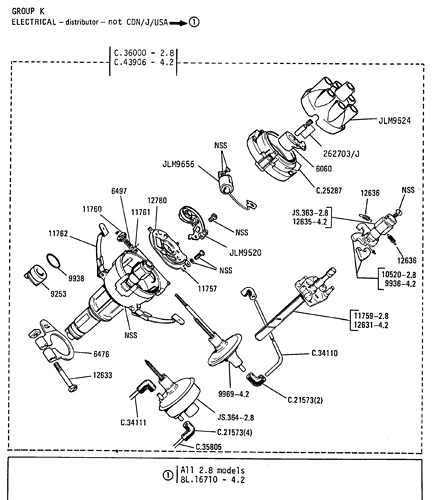 The bracket 6476 looks like the one in Paul’s pic and it looks pretty much like the distributor should be free to rotate inside the bracket. Maybe though, someone has left you with a conundrum of parts that worked somehow, but need replacement. If this is the case, you might still be in a better position to correct things for good and with your own means.

Hi Frank, my distributor doesn’t have the advantage of a vernier adjustment, only the elongated hole.

I wonder if I haven’t slackened off the clamp plate sufficiently and then your comment Jochen about the distributor moving on the holding bracket would apply. My holding bracket is different from the drawings and photos that have been put on here in that it has another hole in it with another bolt through it around which the holding bracket pivots, if that makes sense. Thank you for help guys, I will persevere some more and I will prevail!

By now you know a lot more about the ignition in your car than your mobile mechanic will, I bet.

Yes, Jochen. If he doesn’t know who Robert Palmer, Lady Diana Spencer or Richard Nixon are, he’s unlikely to know much about breaker ignition systems.