Hello all, as mentioned elsewhere I got excited and gave it way too much gas going around a corner last week and spun off into the weeds. Fortunately overall the damage is extremely minor except the lower radiator mounts got pushed in. The Aux fan is semi-crushed and the main fan somehow got snagged in one of the straps on the back of the radiator and it’s both sheared off the shaft and slightly cracked.

Car is actually drivable as long as it’s cold out, but I’m going to need a fan solution come summer. It seems like fans are somewhat hard to come by (though Jagbits seems to have them) and as I may not be able to get the radiator mounts beat back into place I’m thinking about going with an electric fan setup.

This is a somewhat well sorted but ratty car I bought more to drive than to show, so it doesn’t have to be pretty and the easier/less expensive the better.

main fan somehow got snagged in one of the straps on the back of the radiator and it’s both sheared off the shaft and slightly cracked.

Sounds like the shaft of the fan clutch snapped (?)

New fan blades and clutches are available for both 6 and 12 cylinder cars.

A good used Aux fan should be easy to source

sorry, no answer to your question, but an attempt to make you rethink: typically, it’s not like there is an abundance of perfectly working parts to be had for 5 bucks and just dropping in place. Even if your car is not a show car - if the cooling system has been working good enough before I wouldn’t even think about even a 30 or 50 percent extra costs for original setup. That being said, I’d be fairly sure that you get all required SIII parts on ebay, through your local Jag dismantlers or the usual suspects.

It’s the 4.2, 1985. Ok thanks all. I’m sure putting it back stock is the easiest and best way. The reason for an electric setup would be if I can’t get sufficient clearance for the stock fan.

Where are you located? I have a whole xj6 s3 81’ sitting outside in the rain. Maybe I have a few bits you need. Let me know. The Correct fan number is actually sold out everywhere I looked but according to the internet the xj12 fan does fit too and is available. I have not tried it yet but it is on my list as well.

Thanks, I’m north of Chicago. Is this the
Correct fan?

Thanks, I’m north of Chicago. Is this the
Correct fan?

Ah you are very far away. But yes the white one (3266) from moss looks to be the right one. Not sure what special order means. They are sold out on this side of the pound. So get one while you have the chance. I am going to have to get the v12 one that unfortunately is not white. 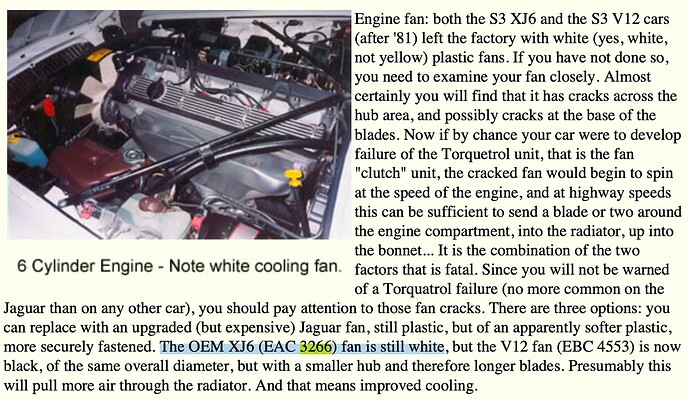 Thanks for that. I’m trying to think if of anything else I could want off your parts car. Are the seats any good? The bottom cushions on my front seats are in absolute tatters. Fuel injector harness any good (mine works ok but pretty crispy)

I am going to PN you. maybe I can take some pictures…