In warm weather the windows are very slow. In the winter, they may not move at all. What are the typical causes and cures for this?

Subscribing to see what others say but I’m pretty sure taking the window tracks and mechanism apart, degreasing and regressing everything with a good cleaning would fix it. Mine are very slow also, and my back left doesn’t work at all.

IF the switches have been cleaned and the windows are still slow it’s most likely the mechanism that needs attention. But check voltages, let’s say 11 v to ground on both leads, but I‘d also like to see the voltage under load, think weak connection. A lead is switched from + to - while the other stays at + 12v, and the reverse for the other direction, as in the other lead changes to -.

you don’t write as to your previous attempts. David is starting with the assumption that the switches have been cleaned … I’d guess that 80 % of all malfunctions of the windows have to do with the wiring running through the switches. The good thing is that this is a job you can perform sitting in a comfy driver’s seat and keeping your hands clean. The not so good thing is that it its quite tedious to pull seven switches, remove four connectors each, file and polish the spades, clean, lube and reassemble everything.

The other 20 % are window channel felts that have lost a great deal of their flexibility after 40 years. As Martin wrote, a full rebuild will certainly help, but a few pushes of silicone spray in the channels may restore a good part of the function with considerably less effort.

Mechanical failures are rare. I’ve seen though a window that - due to excessive friction in the channels - got stuck in the top position while the window motor tore off the lower window rail holding the window in place (the window is held in place in the rail by pure friction provided by a rubber profile in the rail).

I’d start with the switches though. Make pictures, take notes and only disconnect one switch at a time. Get a small nail file or similar and some grease that comes with a dispenser suitable to direct the grease into the female spade connectors - you don’t want the grease stains on your interior.

What’s the technique for accessing the switches? Does the switch panel pop out easily? Where to pry on it? Or, do theses switches pop out from the front?

Stuart,
I have removed, disassembled, cleaned, reassembled, and reinstalled the window switches many times in my two XJ6s and XJ12 to resolve slow windows. This is a very common problem and there are likely dozens of posts in the Jag-Lovers archives about this. Search for “window switches” and you will likely hit a treasure trove.
Here is a general idea of the steps.

That should get you started. Cleaning all seven window switches (including the sunroof switch) may take me 2 hours or so from start to finish. I have done this many times during my 22 years of Series III XJ6 and XJ12 ownership with excellent results.

For those unfamiliar with the internal parts of the Series III saloon window switches here are some “Before” and “After” pictures that I took the last time I cleaned the window switches in my 1990 V12 Vanden Plas in August 2022. 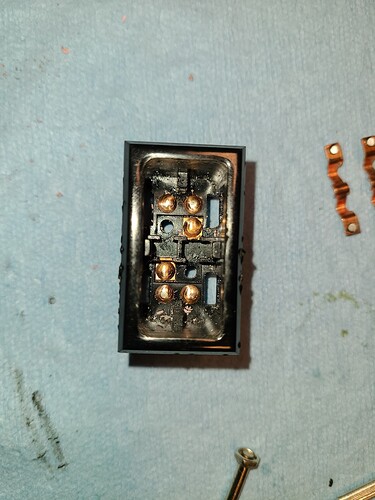 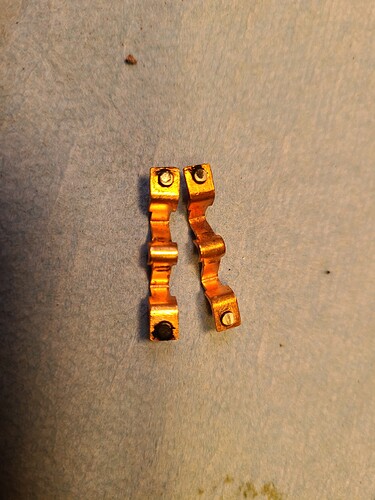 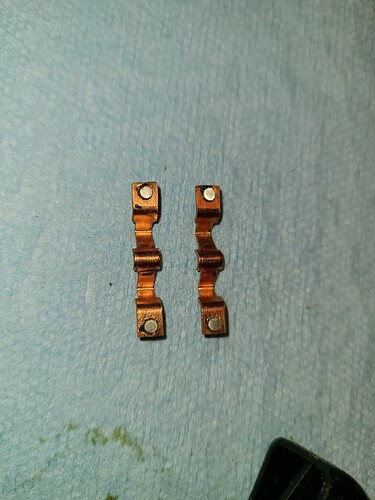 Those switches are such garbage - never understood why, by the S3, that they didn’t put a solid state switch in there vs. those bastards made with electric train parts.

Assuming that your channels and motors are good, the switches are very important as they carry the full load of the window motors.
But because of this they get really abused and the contacts burn.
Plus all this back and forth with all these meters of cables result to a major voltage drop at the motors…
If you want fast windows install relays.

I knew it was coming and no, relays are not the cure for all diseases. They may make the switches last longer. They may be a tiny improvement to soeed but they don’t fix the real issue. Clean switches and good condition of the other parts (window channels, mechanism, motor, wiring) and the windows should be fast by modern standards.

And the S1 switches were so nice!

Thanks for the excellent write-up, Paul!

Just for curiosity’s sake: on SII cars you leave the entire ski slope in place as the window switches are mounted on a carrier plate that is held in place only by friction. So it is possible to just pry off the carrier plate and have access to the rear side of the switches (Lucas SA 178, btw). 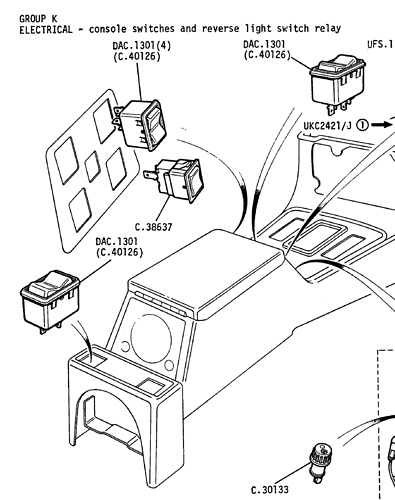 From your description I take it that Jaguar saved a few pence by omitting the carrier plate on SIII cars.

That plate made sense in the S1 that had the switches on a separate carrier - removing the carrier exposed all the screws.
In the S2 the screws are probably hidden - too for the S3 they figured out that they could eliminate the two screws at the front of the slope and get away with one screw where you can’t see it, in the process simplifying assembly and maintenance greatly.

The window lock switch in the S3 fouls the bracket of the bolt, so this switch must be pried out first.

Anyone knows a good test to confirm that the motors are in good working order? I hear that they can be easily replaced with new GM units that cost $70 (and a small modification).

Jochen,
Attached are pictures of the ski slope in my Series III 1990 Jaguar V12 Vanden Plas when I removed it from that car recently. 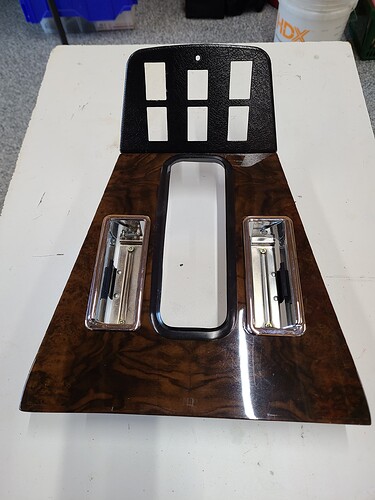 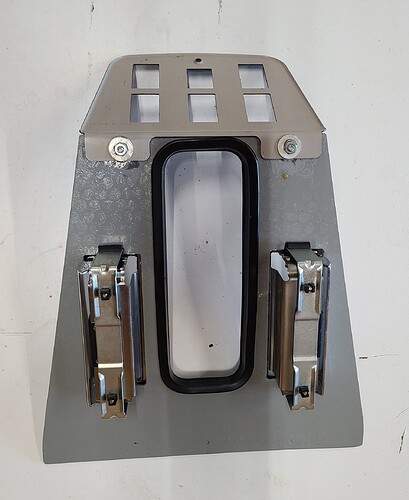 No, there is no carrier plate. The early Series III cars (1979-1985) had a one piece ski slope covered by black vinyl. The later cars (1986-1992) had a two piece ski slope with a lower piece covered in wood veneer and an upper piece covered in black vinyl. Many of the cars that I have seen have witness marks of torn vinyl where someone tried to remove the switches from the front by prying them out. Based on the designs of the ski slope and switches I believe that it is pretty much impossible to remove the switches from the front.
The Jaguar part number for the window lift switches is DAC2747, the Lucas part numbers appear to be 152SA and 35258.

Eric,
When I parted out three Series III XJ6s, I removed all the doors and temporarily stored them while I tried to sell them complete, or part them out. I was able to test the window motors with the doors removed by applying power to the Red and Green wires going directly to the motors. These wires can be found in the lower A pillar area for the front door windows and in the B pillar for the rear door windows. I suppose that you can also test the motors further up at the switches by applying power to the correct wires (info in the S57 Electrical Guide).
Cleaning the ground wire attachment points is probably a good idea (locations in the S57). I don’t know anything about any GM units and my window motors still seem to be perfectly fine after 33 years. The only exception is the occasionally cleaning of the window lift switches every few years. I am OK with that.
BTW, after 22 years of Series III ownership I am automatically suspicious of anyone who says that anything on these cars can be “easily replaced with” anything.

Well, Eric - the pos and ground wires carry the same current, so should have the same dimensions. With equal thickness; ‘myth’ - but of course, a bad ground has the same effect as bad switch contacts…

As Aristides says; the switches carries the full current - but it is the switching operation itself that burns the switches. Inevitably, there is arcing which burns contacts - exactly the same as with the ignition points. Though of course; lack of use may cause corrosion build-up - which, as with burning, increase resistance. which causes detrimental heat build-up.

Incidentally, when cleaning the switches it’s worth while to to get the surfaces as smooth as possible, like the originals - rough surfaces shortens the cleaning intervals.

Don’t worry too much about the window motors themselves; they are designed for continuous operation - and are lightly worked in this application. If they run at all they are likely OK…

relays are not the cure for all diseases. They may make the switches last longer. They may be a tiny improvement to speed but they don’t fix the real issue.

I’ve put relays and the difference was huge, the speed that the windows are going up and down more than doubled.
And the switches, channels and motors were all in top shape by the way.

So you had a wiring issue and bypassed it. I put in relays next to the switches with a large enough power cable (almost no drop in speed when doing 4 windows) and little improvement. I‘m sure the other parts were in great shape and IIRC you did a really neat installation but it couldn’t just have been the relays.
My S1 windows are so fast that people comment on it, I have never done anything to them.

I hear that they can be easily replaced with new GM units that cost $70 (and a small modification).

You may already have the GM* motors. Circa 1984 Jaguar began using Brose motors but, prior to that, I think GM motors were used exclusively. Both are very durable and long-lived.

*Calling them “GM Motors” might be a slight misnomer. They were AC Delco motors. AC Delco is a parts manufacturing and distribution subsidiary of GM. I’m not sure if the AC Delco window motors used on Jags were ever used on a General Motors product. But I’m taking things into the weeds a bit.

More/better grounding can’t hurt and can only help.

I knew it was coming and no, relays are not the cure for all diseases. They may make the switches last longer. They may be a tiny improvement to soeed but they don’t fix the real issue. Clean switches and good condition of the other parts (window channels, mechanism, motor, wiring) and the windows should be fast by modern standards.

The relay upgrade has been popular for a long time.

I never made the upgrade. I’ve always had good results with the clean-n-lubricate thing. And cleaning the window switches every 10 years never seemed that hateful to me.

I dunno. To me it seems like one of those “A cure for which there is no disease” type of things.

But, hey, upgrades can be fun and satisfying. So to each his own.