For those of you following my “Smart Gauge” stepper-motor gauge project, things have been moving right along. The firmware is nearly done, and the browser-based GUI is getting very close to done as well. The WiFi “access point” and web server are both working flawlessly. Everything is now working as I want, and the prototype gauges and senders have been working perfectly for months now. I think I finally have a solution to the last mechanical problem - coming up with a viable means of producing the new needles for the gauges, to fit the stepper motor movements. The answer is an SLA 3D printer!

I’ve made one major change in the architecture - I made the "smart gauges a bit dumber. But, with good reason. Initially, the gauges were pretty smart, largely self-contained - reading the sensors, scaling/correcting the readings, and controlling the stepper motor movements. The “system controller” tied all the gauges together, and provided the means of configuring the many lighting options, and providing a backup display to any WiFi connected smartphone, tablet, etc. But, this architecture created too many potential failure modes where a single failed gauge could impact other gauges. So, I went ahead and moved most of the smarts into the “system controller”, as it done on all modern cars, and pretty much made the gauges slaves, so failure of a single gauge cannot affect other gauges. This means that the three “smart gauges” don’t even have to be connected, and you can still watch your temperature, oil pressure and fuel level on your smartphone.

This also makes it easy to support redundant sensors for temperature and oil pressure, so even a sensor failure will not cause a loss of accurate readings.

I now only have to do the final revisions to the gauge PCBs, and do the (very simple) system controller PCB.

Here is the current GUI, as it will appear on a mobile phone screen:

First, the main page, which provides a “virtual dashboard” for the temperature, oil pressure and fuel gauges, as well as buttons to access the configuration and calibration pages. 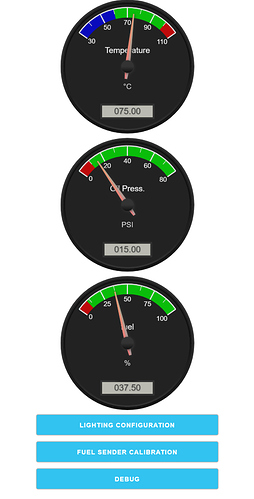 This is the lighting configuration page: 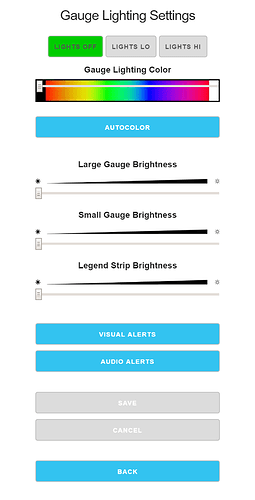 And the Fuel Sender Calibration page, with a calibration in-progress: 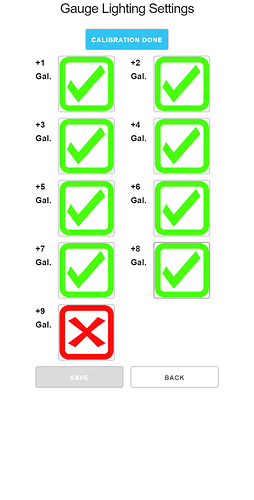 More to come, before long…

Thank you for the update Ray. Looking forward to the day they are available.

As one who has known Rays products/quality/craftsmanship (world class bloviator {those who didn’t buy one wish they had} and EDIS {those who didn’t get one are angry they didn’t}) for more years than I want to say out loud, after seeing this I am left speechless.

Ray, I just read Schmed’s report on the Bloviator. If I didn’t have to worry about more skin cancer, I would order one forthwith but I’m afraid my serious top down days are gone. My real reason for this post is that I hope you have registered “Livingston Bloviator” or the chosen variation, with USPTO as a tradename. Protect thine hiney! Dick Hile 74 OTS 59 Mk IX Page/Lake Powell, AZSent from my Verizon Wireless BlackBerry Search the archives & forums - http://search.jag-lovers.org/ Su…

In an effort to bring you up to speed quickly, the bloviator is an invention/product that Ray made custom for the “E”. It is essentially a transparent screen and plexiglass that goes across the rear of an OTS, cutting down the wind (hence bloviator, in honor of the great Bill O’Reilly) and noise, allowing the passengers to actually speak to each other in a normal voice.

…allowing the passengers to actually speak to each other in a normal voice.

…and retaining some level of hearing function!

Gone thru the archives and can’t find a good photo. The closest I could find was linked to comment from Ginger who said " I have to say those are some handsome looking guys " or similar. There were three photos and one was , I believe, of Ray holding a prototype but when i selected the photo …nothing.

This is just beyond cool, @Ray_Livingston!

Gone thru the archives and can’t find a good photo

Mark,
I think you are looking for a photo of Ray’s Bloviator? 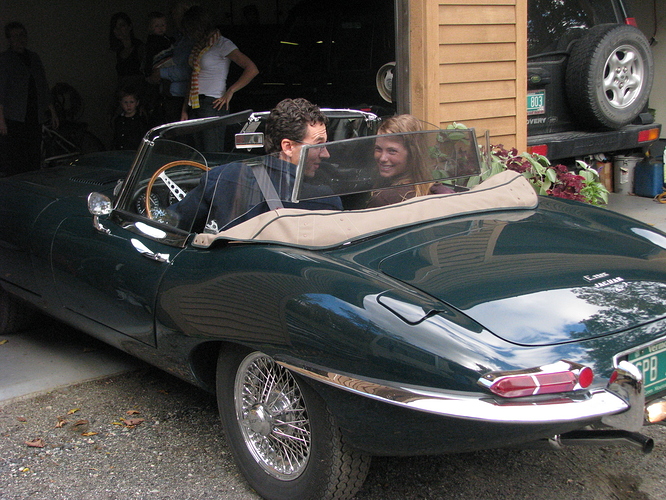 Thanks for doing this Ray. I continue to be amazed by the wealth of knowledge and ingenuity here. Similar to the guys in the Cosworth Vega club who figured out that GM did some things with the cam timing to essentially create an internal EGR so they would not have to add it or an air pump to the engine but still pass 1975 USA / California emissions. This was they heyday for emissions restricted engines in the USA. Downside was it negatively affected low end torque. Now you can send your cam sprockets in for $100 and have a second alignment hole and timing marks added that improves low end torque and idle. If you need to take it in for testing just switch them back to original alignment holes for the day. Makes it a much better running engine in all conditions. Best $$ I ever spent on my Cosworth.

Fantastic Ray, was just rereading the other post on Sunday. Was wondering about any update and voila’ , watching closely and Happy Holidays !

Similar to the guys in the Cosworth Vega club who figured out that GM did some things with the cam timing to essentially create an internal EGR so they would not have to add it or an air pump to the engine but still pass 1975 USA / California emissions.

That’s how modern engines with variable valve timing work. My '01 BMW has no EGR valve, but it does have variable timing on both cams. So, they can just change the exhaust cam timing to leave more residual gas in the chamber - instant EGR at zero added cost. My '07 BMW doesn’t even have a mass air flow meter - They know the engine characteristics so well at this point that they can calculate the airflow, based on manifold pressure, temperature, throttle position and RPM, and other parameters. Modern engines are really getting pretty amazing…

So true Ray now days… I remember back in the days when I was a tech for Bosch. Even before the MAF sensor. On the D jetronic AF sensors w the swinging door As we liked to call it , and the K jetronic CIS with fuel distributors.

Nice picture Rod.
Maybe we should pay tribute to Ray by starting a thread dedicated to Blow-Viator pics? 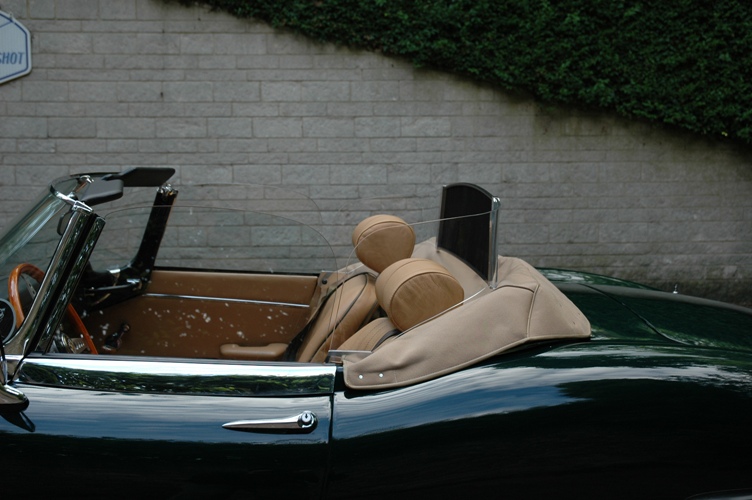