Walking this morning in Rancho Santa Fe, CA when we came across this little gas station in town. Wish I had that near my house but without the high prices…
Abe 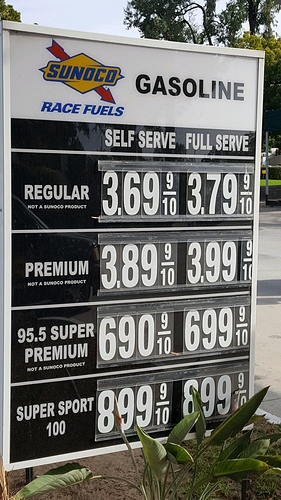 One nice thing is that if you buy super sport you get full service at no extra cost. LOL

You can get 100LL octane near where I live but they wont allow you to fill that car, instead you can only buy it in 5gal containers…then you drive down the road and add it to the tank!

Walking this morning in Rancho Santa Fe, CA when we came across this little gas station in town. Wish I had that near my house but without the high prices…

Was the attendant wearing a mask and carrying a gun?

Yes, I know it was California.

That’s actually not that bad. That’s cheaper than their per gallon price for a 54 gallon drum. I’m assuming it’s their 260GT fuel.

I’d be tempted to give it a try but the closest one to me is 80 miles away.

edit: bizarre I tried putting a 54 gallon drum in the cart to see what the shipping charge would be. It says that delivery to a residence in 78750 would be just $11.39, WTH? Something tells me they’d be less than pleased when they see the pitch of my driveway. 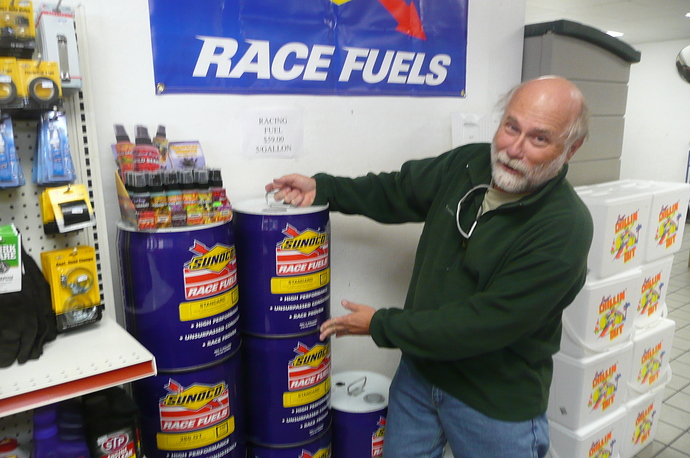 I’d be tempted to give it a try but the closest one to me is 80 miles away.

I do not believe the 100 octane is leaded…we are in California, For that matter I do not think you can get leaded fuel anywhere.
Abe

I can buy 100LL at a local small airport: when I drove Tweety on a track (bumped timing up, plus it just smells so darn good!), I drove right up, pumped it into the car, no worries.

The superiest super I can get here in Austin is 91, with ethanol no less. For the most part it runs okay but I still get some minor pinking on really hot days if I mash the go pedal.

OK: Astonished you cannot get 93, but, appears you could use it: perhaps all you need is some 100 spiked into the 91.

In Michigan, two gasoline blends of interest to all of us are available. Recreational gasoline is non ethanol 92 octane that many people use in jet skis and snowmobiles. I use it in cars that don’t do well with ethanol. It’s about $5 per gallon. And leaded race fuel is 100 octane and $8 per gallon.
The Etype does well on 25% race fuel mixed with normal unleaded. The SS100 at 7:1 compression doesn’t care…

In s pinch, that should run on white petrol…