Does anyone have experience with, or are running, solenoid dipping headlamps? Is there anything in particular to be aware (or wary) of?

Are you aware that on the standard setup one of the headlamp goes out when on dip. The solution that I think most people adopt is to fit a solenoid to the lamp that is missing one. Other than that the system works.

Yes, my left lamp dips to the left and the right lamp goes out. There is no solenoid in the right. That was the law in the UK at the time.
Same with my fog lamps incidentally, the left has a dipping feature.

I fitted a solenoid to my static lamp. The reflectors on the static lamps are only retained by a single screw and once removed they pivot like the dipping lamps. You only need to find a solenoid and a little spring (or elastic band even) and you can wire up for double dipping.

Dual filament bulbs don’t work. You can only achieve focus on one filament and the other will be wildly wrong.

My 1948 MK IV 1 1/2 has P60 headlamps - one of which is a static case and the other dipping. They are 2 different bodies, so mine can’t be modified to change the static one into a dipping version. 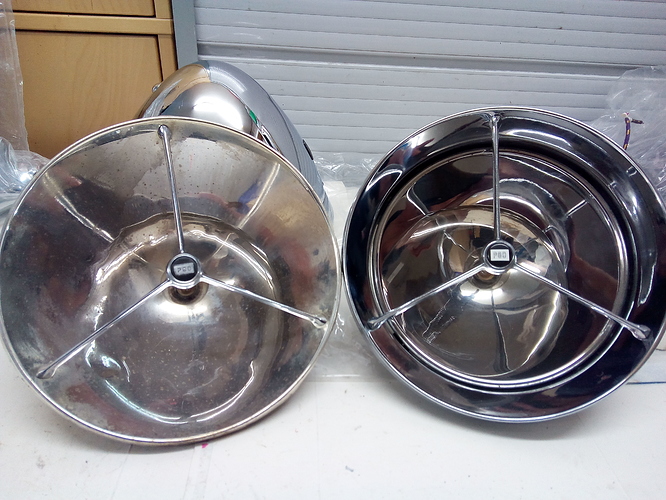 My dipping headlamp did not function when I got the car for two reasons - firstly the internal fuse had blown (see picture below), and second the crude hinge mechanism had rusted tight preventing the inner case from moving. Some careful cleaning and lubrication, replacement fuse, and it now works OK. 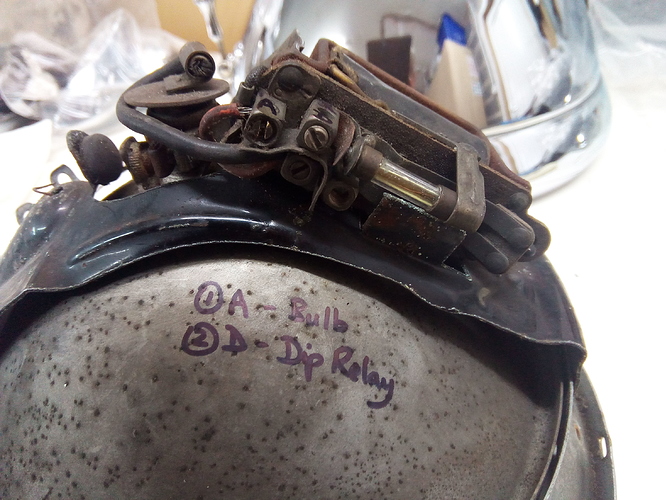 I’m not sure if turning off one of the headlamps when you dip is a good idea when driving at night (but that was the highway rules years ago). I can’t fit another solenoid to my static lamp as it lacks the inner swing reflector, so I’m playing with some LED bulbs and potential change of wiring to achieve what will look like “double dipping” of both headlights and hopefully still give some forward road visibility in the dark !!

So to Peter’s original question - is there anything to be wary of with these headlamps - then I supposed driving at night in locations without street lighting is to me something to be avoided if you can. Another matter to note if you are having the cases re-chromed is that the outer case parts are a close fit, so (and my first mistake) is that you either need to remove the old chrome, etc around the mating areas or be careful not to make the re-chrome too thick or the lens cover will not go back on the reflector body.

Thank you all. As I understand it, the single dip headlamp feature was unique to the ‘home’ models but all exports were twin dipping as per the wiring diagrams. Exports that are not, will likely be later private imports, and not factory exports. This was to reduce glare to oncoming drivers and a part of this equation was to ensure the two parking lamps were functioning as these performed as clearance lamps and were part of the roadworthy inspection process.
I have found some solenoids and am keen to revert the headlamps to the original solenoid dipping function, so will tackle this sometime in the future.

BTW.
Classic Car LEDS hope to have the development of their replacement lamp, BA20D that will fit the P100 headlights, completed shortly with the lamp possibly available next month.
Cheers Graham.

My 1948 MK IV 1 1/2 has P60 headlamps - one of which is a static case and the other dipping. They are 2 different bodies, so mine can’t be modified to change the static one into a dipping version.

I was referring to the P100s used on the larger cars.

BTW.
Classic Car LEDS hope to have the development of their replacement lamp, BA20D that will fit the P100 headlights, completed shortly with the lamp possibly available next month.
Cheers Graham.

There are B20Ds available for motorcycle headlamps and I have modified them to create B20Ss by soldering a brass washer to connect the separate terminals for use in my P100s. They give a reasonable amount of light and liberate significant dynamo output for using wipers and heater with headlamps whilst still maintaining charge.
See: http://www.nostalgiatech.co.uk/LED%20Lighting.htm

could anyone with these lamps in pieces, please give me the part number of the dipping reflector solenoid. ive worked out it could be in anyone of 3 places depending when it was made…on a carboard tag up at the pushrod end, or stamped/engraved ont0 the flat base between the mounting screws, stamped/etched onto the bakelite insulator plate beside the coil. As best i can work out, someone has fitted a 6V one to one of my headlights as its clearly stamped 6V (and does not work). Am i correct in assuming they were all 12V on SS and Jag, even prewar?
I would appreciate a link to a headlight wiring diagram as used on cars with double dipping reflectors, eg USA market or possibly UK market after 1945
many thanks 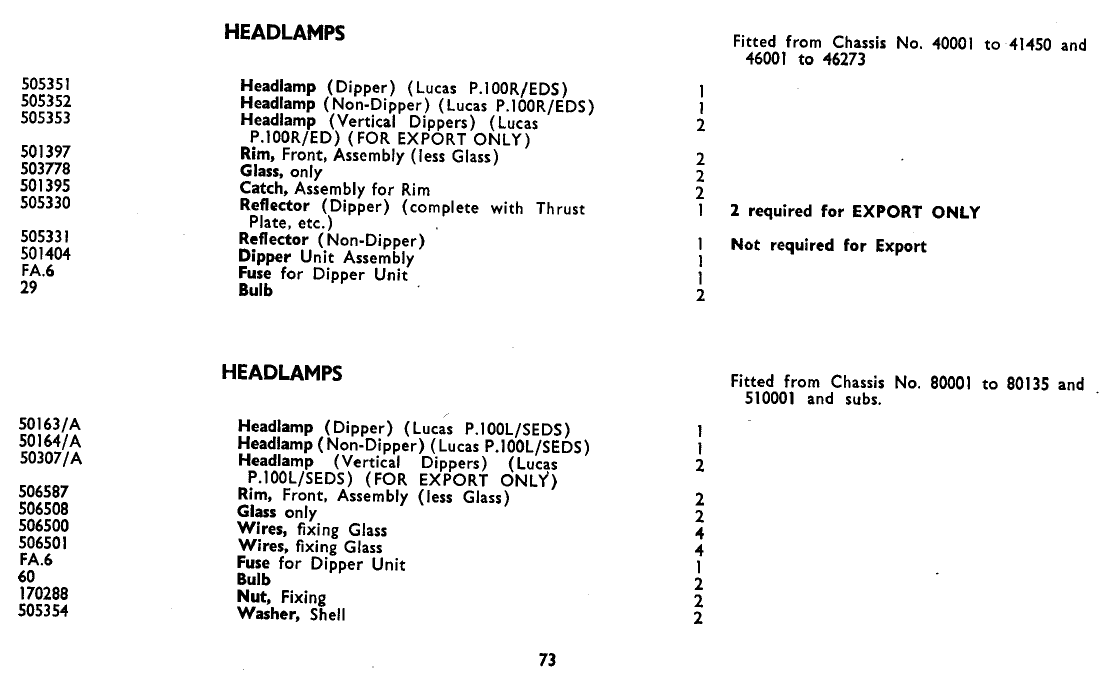 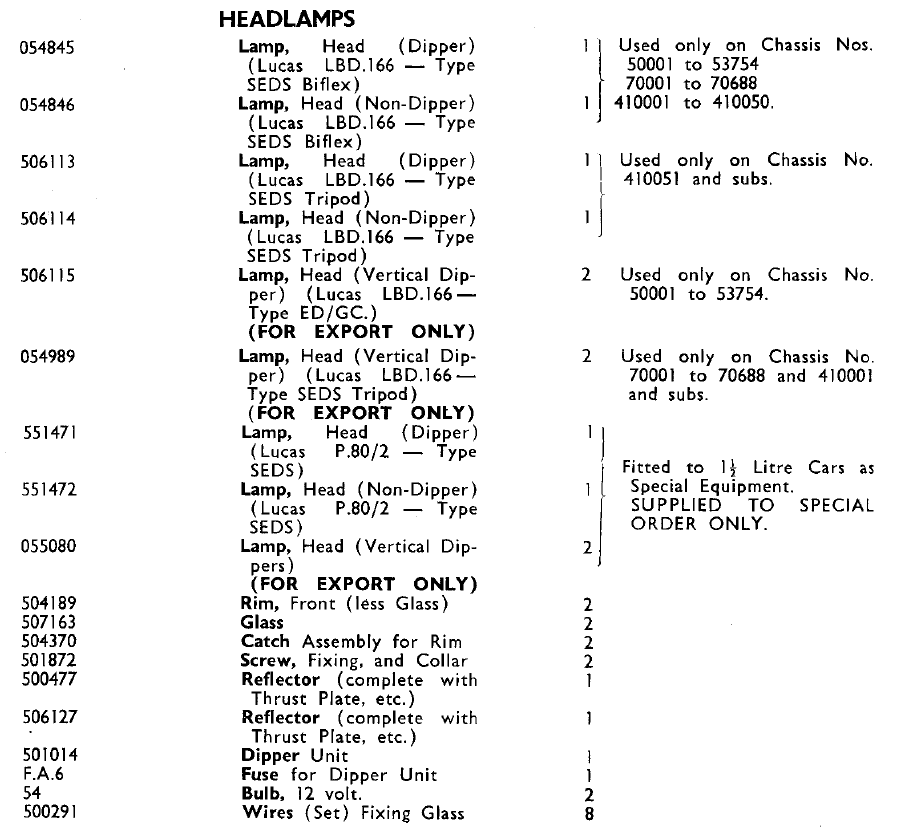 All SS and Mark IV were 12 V positive ground.