Is there anybody who knows where in the EU I can source a complete good 2.88 diff to swap into my 4.2 FHC S1.5. Preferably UK, NL, BE or the likes. I am in the Netherlands. Thanks.

If you haven’t already done so, I’d suggest you post your inquiry on the E Type forum ( http://forum.etypeuk.com ). It is more EU-oriented, while Jag Lovers is more US-centric.

XJ6 diffs are everywhere. They only sometimes have posi, though, so you need to pay attention if posi is important to you.

What is posi as I don’t know the term

YES a GM word for LSD,(limited slip differentail).
its the same as Jag Power Lok , both DANA design, like Salisbury!
some of the parts will interchange!

Get the one with the drain plug (Salisbury), not the Dana.

Get the one with the drain plug (Salisbury), not the Dana.

Probably good advice, but a bit of explanation is in order. What we jag-lovers call the “Dana” is a diff that was only used for a couple of years around 1987. Has no drain plug, and the output shafts are held in with 3 bolts rather than 5. Mechanically, it’s a sound component. Biggest complaint is that it’s somewhat difficult to get parts for, so if it goes bad it’s common to just swap in a Salisbury rather than try and fix it.

The reason Jaguar made the change was that Salisbury was bought out, and their diffs were no longer available. The reason they went back is that the company was eventually bought out by Dana, who were wise enough to put the superior product back into production. So while we jag-lovers refer to the later diffs as Salisbury – they have the drain plug and 5 bolts holding the output shafts in – they are, in fact, made by Dana. And the gear sets used in all of these things are described as “Dana” gear sets.

What is posi as I don’t know the term

My favorite explanation of a posi …

One of my all time favorite movies for this particular scene

I fell in love with Marisa Tomei at least three times watching that movie.
My fave is when she (wearing a black cat-suit) is talking Joe Pesci on the front porch of the hunting cabin

One of my all time favorite movies for this particular scene

That and when Joe shows up in court wearing what looks like a circus ringmaster’s tux. The whole movie is a gem.

That and when Joe shows up in court wearing what looks like a circus ringmaster’s tux. The whole movie is a gem.

on the front porch

“my clock is ticking, Vinny…” Is that the one? I thought those tights were striped.

Funny thing about this movie…I caught all the car surprises in the script but I was so used to writers getting things wrong unintentionally, I just thought they were mistaken not, essential plot elements.
I was like: yeah right those stripes are painted on, no way a Skylark is going to lay that rubber and hop over a curb without bouncing the rear axel? tsk tsk.

After this scene I was in on the joke, so I knew what was going to happen when the prosecutor blew the question about the chevy v8.

Bill - you’re correct on all counts except Marisa’s cat suit was floral, not stripped. 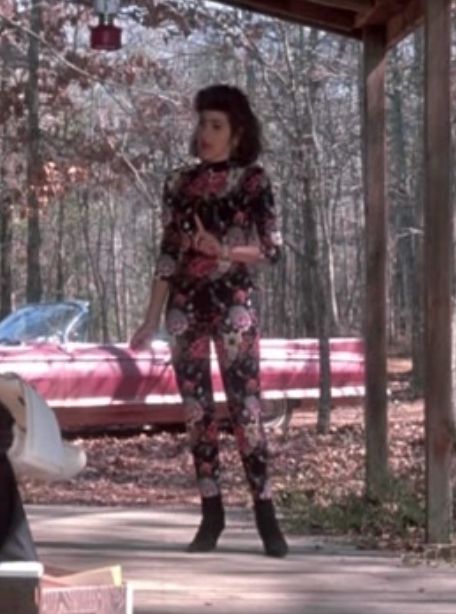 Internet forums can be hilarious. Try explaining to someone how a question about getting a 2.88 diff in EU has turned into a discussion about Marissa Tomei’s catsuit print. LOL

Try explaining to someone how a question about getting a 2.88 diff in EU has turned into a discussion about Marissa Tomei’s catsuit print.

Not at all! It’s pretty funny. And not atypical. And what makes forums entertaining.