The Anthony Rhodes pdf entitled “Repairing Jaeger & Smiths Speedometers” repair is a very good read and this short few paragraphs is meant as a supplement to that.

1/ The hardest part is removing the needle from the front face of the speedo. I(f it has been wedged onto there for the last 45 years then it’ll take quite a lot to pull it off. If you can get past that stage without breaking anything then you are past the worst.

2/ The odometer and speedometer functions are almost completely separate and although it is mentioned, the easiest way to correct the speed is to find a spare speedo of the same basic construction and swap the rear cage with magnet over, lock stock and barrel.

3/ If the odometer misreads (e.g. because you have swapped out the differential) then there is no choice but to replace the worm gear/pinion gear combination. Even minor corrections have to be addressed this way as the odometer is a separate mechanical function related solely to the number of turns the speedo cable makes.

4/ Not mentioned in the article is the right angle drive at the gearbox end. These come in two varieties. For non overdrive boxes, the turns ratio is 1:1 and for overdrive boxes, the ratio is 11:14. I presume the different angle drive ratios reflect the use of an overdrive final gear on the gearbox and this arrangement also means that the turns per mile worm/pinion used in MOD saloon car speedos is a lower number than in speedometers for non overdrive cars.

5/ The article shows a picture of the magnet and drag cup assembly for the speed indication. Not mentioned, but visible is that the magnet has two trapezoidal “wings” spot welded to it. My guess these are for fine adjustment of the magnetic strength, as they can be bent to be closer to the drag cup and thus slightly increase the magnetic flux seen by the drag cup. This will make the speed read higher and I expect minor adjustments of a few percent can be effected by adjusting how closely the wings are bent to the drag cup. It also implies that another method of adjustment would be to alter the air gap between the drag cup and the magnet/rear cradle assembly by means of washers under the screws which separate the front and back halves of the works. This would have to be done subject to not altering the action of ratchet assembly for the odometer on the front half of the odometer assembly.

6/ The angle drives appear to have different length spigots, presumably because the mating assemblies in the tail of the basic gearbox are different from that at the end of the overdrive box. It is my view that the shorter stub from a BG2402/08 (11:14) meant for the overdrive box is slightly too short and a speedo failure may actually be simply that the spigot at the gearbox end has been rounded down a bit through wear. (I base this on swapping in a BG2402/07 1:1 and getting the speedo function back straight away, albeit with the wrong ratio now). 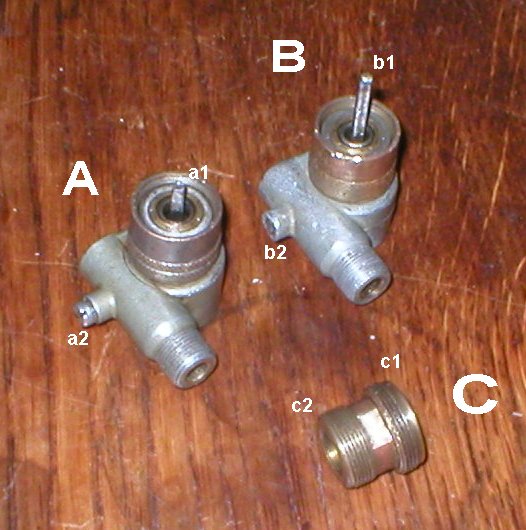 Rather than attempt to lengthen the short stub, one approach to correct this deficiency is simply to turn down the overdrive gearbox brass insert which threads into the overdrive tail that the angle drive connects to, shown as “C” in the above picture. (The angle drive knurled cylinder connects at c2 and thew c1 end screws into the gearbox tail. This shortens the distance between c1 to c2 and effectively makes the angle drive stub longer by the same amount. A flat sectioned spanner is needed to unscrew the insert (you can see one of the flats in the picture midway between c1 and c2 and behind the c1 end will be acopper sealing washer. Inside the assembly will be what looks like a thin brass olive, presumably part of the oil seal arrangement. Protruding out of gearbox will be a brass pipe which sits down the middle of brass insert “C” and this is limit of how much you can turn down the insert. You can take about 1mm off of the c1 end and about 3mm from the c2 end without altering the functionality of “C” and it makes the “a1” stub end about 3-4mm further inside the gearbox so it mates better and the spigot tip suffers less future wear. It also “fixes the speedo” in this case.

Marek,
Just an FYI, I have a 1970 OTS with 4 speed and 3.54 rear end. My right angle drive is the 11:14 version. The spedo face fine print is 1312, so that is the spedo revolutions needed for 1 mile, its also the RPM needed to indicate 60MPH. I am changing to a 2.88 rear end so I will need to change the ratio of the right angle drive or add a ratio box or in a pinch change the spedo magnetic field so it indicates speed correctly and just live with a slow odometer. I have modified spedo’s before by adding a small chip of a rare earth magnet to the cup. Adjusted the magnetic field to indicate correct speed. Does anyone know if other right angle drive ratios are available?

If you read the article, there is an implication that the Triumph has a 2.5:1 angle drive, but I don’t think that’d help. The speedo cable thread will be different I suspect, as it is on MG cars.

Alternatively, make the speedo cable spin 23.6% as much as it did before to maintain the speed indication and bump up your worm x pinion by by 23%

Logic says that the speedometer rear cage together with its angle drive from a 2.88 differentialled car ought to have the correct magnet in it for your application, so long as the indicated scale on the face was similar (160mph for etype but a lower number for a saloon).

/ If the odometer misreads (e.g. because you have swapped out the differential) then there is no choice but to replace the worm gear/pinion gear combination. Even minor corrections have to be addressed this way as the odometer is a separate mechanical function related solely to the number of turns the speedo cable makes

Hi Marek, Yr addendum to the Rhodes booklet is very useful. To get the exact plastic gear to make the odo accurate turns out to problematic as no-one sells them , and i would guess that anyone who has them keeps them for their repair shop! The only way to located used Smiths ones is at flea markets. While this might seem to have promise, I have had limited success as there are few flea markets for old British cars . Because the gears wheels have unique patterns and grooves on their faces, I had toyed with having some blanks ( toothless discs ) made by 3 D printing. By this means a batch a batch of 50 would cost at least $250 , as it would need careful programing ( based on a the dimensions and shape of a token old gear wheel ) . Then you would need a way to machine the disc to get the required teeth around the wheel’s circumference . Sadly the project stopped at this point!!

3/ If the odometer misreads (e.g. because you have swapped out the differential) then there is no choice but to replace the worm gear/pinion gear combination. Even minor corrections have to be addressed this way as the odometer is a separate mechanical function related solely to the number of turns the speedo cable makes.

Another alternative is to install a ratio adaptor in line on the speedometer cable. They are available from several sources in the US and at least one place in England that I’m aware of. This is the option I exercised when I changed my differential from a 3.54 to a 3.07.

Or, install a Speedhut GPS speedometer that is totally accurate and gives you a accurate odometer as well… plus other features. Went through all the speedo/odometer 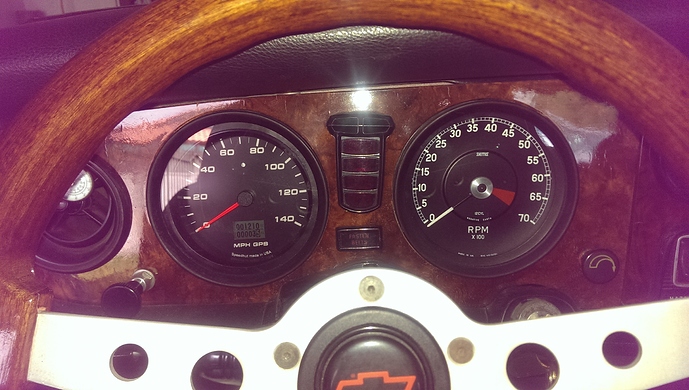 Can get white needle if desired… mine is now white but the photo is old…top row in the bottom square is the odometer reading since the install and the second row is a trip meter that I zero out on every fuel refill. Speedo cable is totally removed and the right angle adapter is still installed (not needed but too much trouble to remove)…

1/ The hardest part is removing the needle from the front face of the speedo. I(f it has been wedged onto there for the last 45 years then it’ll take quite a lot to pull it off. If you can get past that stage without breaking anything then you are past the worst.

Thank you Marek,
What I found worked well for removing the needle was an iPhone repair tool kit, very cheap but has 2 plastic levers that allowed me to work the needle off with minimal fuss. I’ll post a picture if anyone wants to see what I’m talking about.
Cheers,
LLynn

What I found worked well for removing the needle was an iPhone repair tool kit, very cheap but has 2 plastic levers that allowed me to work the needle off with minimal fuss.

Clockmakers have “hand levers” which are a bit like miniature tire irons. You lay a bit of (clean) thick plastic bag on the face to stop the levers marring it, then lever the hand boss up.

Roger
what model Speedhut speedometer did you order? I would need the white needle!

I put it in a cut off old speedo housing, but a tach housing would work as well…just did not have a
spare one to use! Their GPS antenna is just lying under the center grill in the front window… it picks
up the signal well from there. I put the remote control cable in the old spot where the old cable was under
the dash.

Here is the ordering info, you can see the areas you can choose: 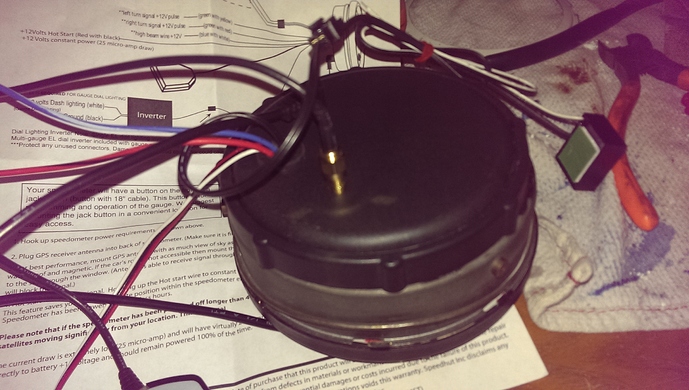