Here is a photo of a fuse. 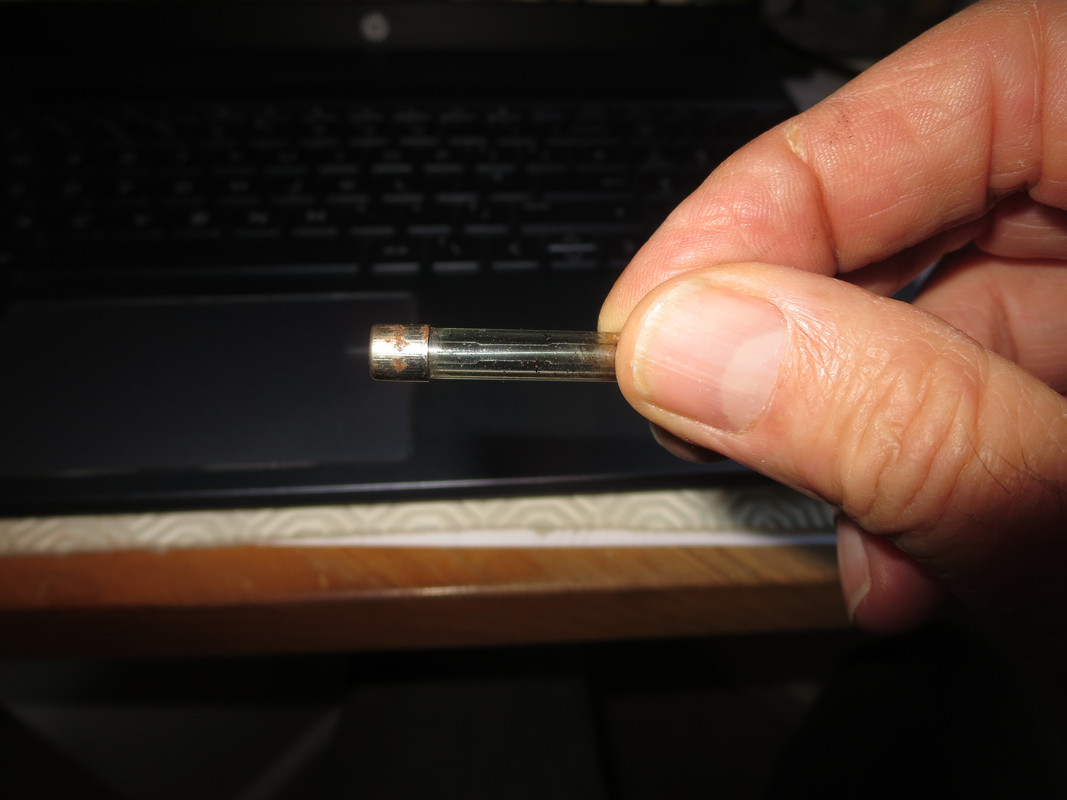 It is a nice fuse. It is a lovely fuse. It has been in my car, performing its duty of protecting against a sudden drop in resistance on the dip beam circuit for many years, as can be seen by the traces of rust on the cap. I’m guessing that it is not an original fuse, but it was certainly in the car when I became custodian almost 19 years ago. So it owes me nothing.

But why have I shown you a picture of a fuse whose filament is clearly in tact. This is why. 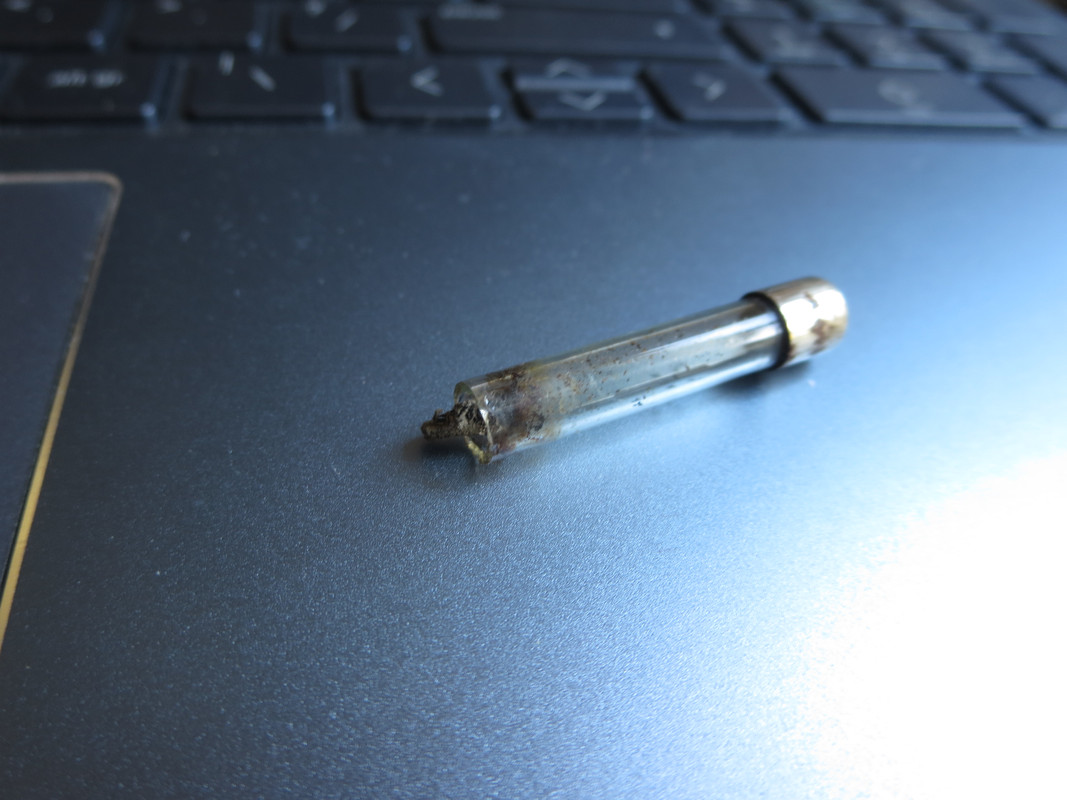 Under the cap on one end is evidence of a breakdown in continuity.

Last night, as I was driving home from visiting friends (a round trip of almost exactly 100 miles - half in darkness), we had just passed through a small village when I detected a strange smell. I put it down to the one of the residents of that village having had an accident in the cooking department. Out into the countryside we drove and onto a busy main road. As I dipped the headlamps for oncoming traffic the road suddenly went very dark - only the sidelights for illumination.

As I slowed the oncoing traffic passed plunging the route ahead into total darkness. (To give some context to the level of darkness experienced, where I live in Wiltshire close to Salisbury Plain levels of light polution are very low such that star gazers and UFO hunters regularly visit either to understand the universe or make contact with those aliens who arrive in flying saucers completely undetected by military radar, but clearly visible to the UFO hunters.)

I flipped the main beams on. They worked, so I slowed and aimed for the next layby to have a look.

After another couple of cars required plunging the road into darkness before the next layby, the dip beams came on again. As we were quite close to home, we carried on slowly under dip beams, as it seemed that they only stopped working when the main beams were on. Meanwhile, that smell was with us all the way.

At home the dip beams failed again. I quickly located the issue using my nose to trace the source of the smell, and once the dash panel was dropped I could see that the cap on one end of the dip beam fuse was blackened and not properly attached.

I am thankful that I alway carry spare fuses. I am also thankful for brown corduroy trousers.

Sounds like you made contact with the Prince of Darkness……
Glad to hear you were unharmed, made it home safely and found the problem.

Chris,
I had a similar experience with the headlights in my 1969 E-Type FHC shortly after I got it about 19 years ago. Yes, of course it happened at night on a lonely country road.

In my case the smoke and very funny burning electrical smell was coming from the main/dip headlamp switch in the dash. I verified this in the morning when the wisps of smoke were clearly visible. I ordered a replacement switch, installed it, and haven’t had a headlamp problem since. I disassembled the failed switch and it was badly melted inside.
I mention this because I wonder if your failed fuse might be a symptom of your headlamp main/dip switch going bad like mine did. If I were you I would check your headlamp main/dip switch for funny burnt electrical smells.

In my case the smoke and very funny burning electrical smell was coming from the main/dip headlamp switch in the dash.

A few years ago with my Cosworth Vega the headlights would randomly turn off and then back on. No funny smells or blown fuses. I checked main/dip headlight switch and saw that one of the connector blades had a blueish tint like it had been getting hot. This is the foot operated type on the floor common on many American cars in the '60’s and '70’s. Replaced it and no more problems. The dip switch will now be one of the first places I look for headlight problems on any car.

This is the foot operated type on the floor common on many American cars in the '60’s and '70’s.

When I started driving my Rover again, back in 2013, it took me a while to get used to having a foot operated dip switch again!

The electrical wiring behind the center panel has always been the feature that made me most apprehensive and felt Victorian-era to me. All those exposed connector ends.

I guess it’s actually a positive that many things are easy to see and get to, but still scary to a person used to modern wiring practices and insulated, weatherproof connectors with no bare terminals.

Last night, as I was driving home from visiting friends…

Funny how headlamps seem to only fail at night.

The dip switch was my first thought. But after a brief fumble in the dark (we’ve all been there) I determined there was no loose connector. The smell test lead me to discount the dip switch and aim for the fuse board.

Today I have completed a quick test drive with the lights on dip all the time. Not wanting to waste the journey, I decided to reduce my accumulation of dead batteries from eight to zero, and to dispose of 20 litres of used 20W60. Oh and dump an old dehumidifier that had stopped dehumidifying many years ago. This is part of a long term project to clear my garage of things that are no longer useful. I have several more trips to go.

Both headlights are on one fuse? No way.

I am thankful that I alway carry spare fuses. I am also thankful for brown corduroy trousers.

All’s well that ends well. I’m glad nothing bad in terms of damage and injury happened.

I’ve had the same thing happen and know it’s no fun.

Had that happen a month ago on the fuse for the engine fan on a hot day. Pulled the fuse - nothing to see, it was relatively new. I jumped the circuit at the relay to get it to work, thinking it was the relay, and drove home with the fans constantly on. I eventually determined that the fuse had zero continuity, although it looked fine. It was not a Lucas fuse, rather it was the type you would buy from NAPA or any other parts store. On breaking the glass it was learned the internal wire had just separated from the connector on one end. Bad solder joint it appeared. First time that’s happened.

That’s horrible. My 69 XJ has one fuse per side and one fuse for outer and one for inner high beams.
I still had a failure because they share a single main power line but was quick to pull the flasher.

At least the original Lucas equipment is good. Good solder joints and good fuse holders. If you think they’re problematic try a 70s-80s Jag, those are really bad. Victorian or not there are few better ways of organizing and servicing electrics.

I disposed of 60+ litres of oil and 3 batteries and two large trash bags. Felt good to have done something long overdue.

And wipers, in the rain…

When a freshman studying EE in college, the tech who oversaw one of the electronics labs told me that they swap out fuses on equipment each year at calibration time as a matter of preventative maintenance. He said since they’re somewhat fragile they can occasionally fail on their own, and since they’re dirt cheap and easy to replace it is better than having an experiment held up by troubleshooting equipment failure.

Seems pretty good advice for cars too. Maybe just be in the habit of replacing them whenever doing every other oil change. If nothing else it would help keep the fuse holder contacts from corroding, and can be done in the few minutes while waiting for the oil to drain.

I ve seen this failure on glass fuses before. I hate fuses and don’t understand why they re still used on cars when the boating industry has switched to circuit breakers decades ago.

Somewhere in the past, it was explained to me that American glass tube fuses were not to be used in British cars. The explanation was that Lucas brand fuses blow at their labeled amperage, and the car’s electrical system was designed around Lucas fuses. American tube fuses blow at a higher amperage than what they’re rated for and could prove dangerous if used in a British car designed to use Lucas fuses. It made sense to me, but I’m no EE. Easy enough to source and use Lucas fuses and I’ve used nothing else in all my BCs. May be urban legend, but I’ll stick with it.

There are numerous strings that detail a wiring change which adds relays and modern bayonet fuses to the headlight circuits. The panel switches carry low amperage and the relays do the heavy lifting. Brighter lights, modern components, lower amperage behind and on the switch panel. I believe Bob Skelly set the example decades ago.

I think you got off quite lightly Chris.

Just wait until this happens to you when riding a motorbike at 50+mph, at night and you are just about to go into a corner.

Another interesting moment was when the throttle simply jammed full open, sending the bike revs straight to the redline, just as I came towards a roundabout…

At least you had a metal box and a nice big crumple zone around you.