Ed, you know you’re a trouble maker, don’t you? Getting me to take off my oil filter just to see if its broken…

No, I was going to anyway. It’s ok, not broken, but I noticed after running the engine for 4 seconds that the oil on the dipstick was a little darker. It’s as I suspected, somebody changed the oil but did not touch the filter. Maybe the bolt was too tight or they thought it was Whitworth or something, who knows.

Anyway I put it in the bench vise and got it apart with a 1" wrench and a hammer. 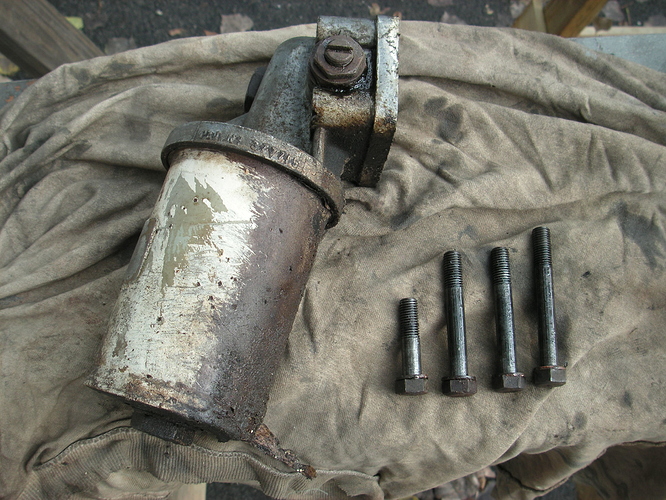 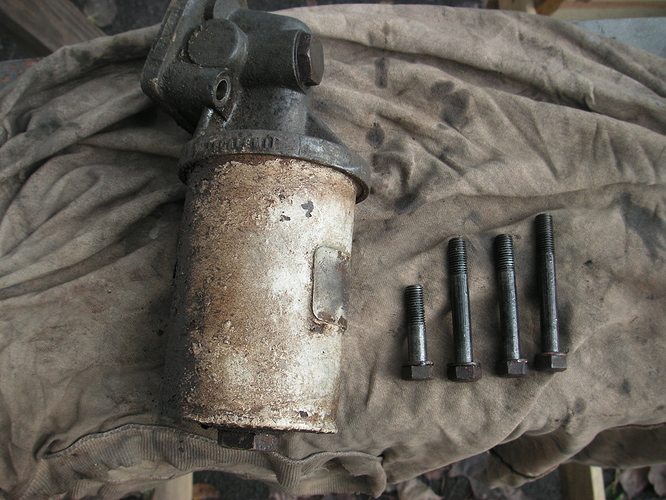 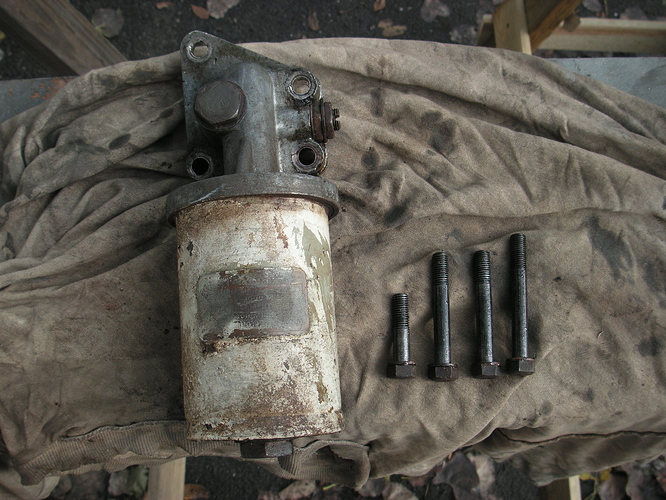 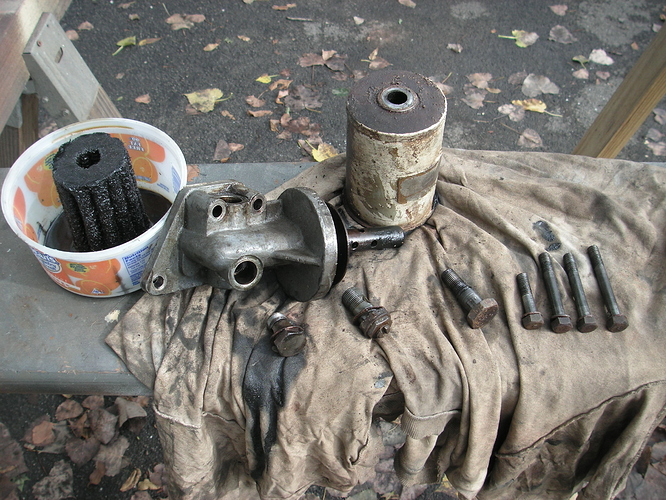 Looks like when T-shirts go to heaven at your place the afterlife is joyful.

Well I’m glad your isn’t cracked. t uses the same siz erubbe r seal as the Mk IV , and the same size seal under the head of the bolt as well.
This size element is a bit hard to find these days, where as the longer mK IV size is plentiful. So I cheated, as i do. I made longer canister to suit the MkIV length { RP 150 from memory]. But as the 3 1/8" dia tube was only available in aluminium, I left it as alloy finish. Which will make it lighter and faster.
If any one comes to the same conclusion , I had to buy the alloy tube in a 20 ft length and got the metal spinners to roll a flange on the end. so I have a box of cut and rolled tubes free to a good home[s]
For authenticity I had the brass plates made and glued it on. Which was likea friend who when ever he made up a new part, he’d get a white paint pen and make up a Jaguar type “C****” part number and write it on… 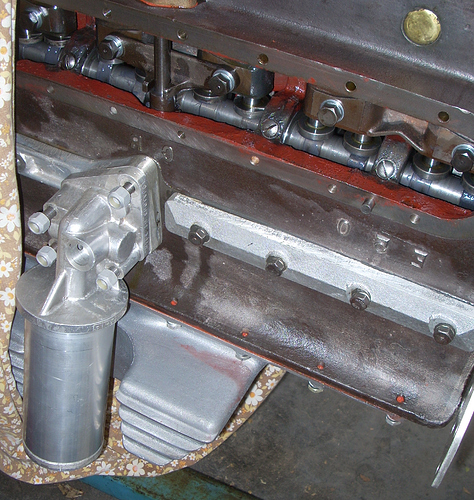 Otherwise, if you want it to stay looking original externally use a P176 filter, which is a little shorter, with a spacer of about 3/8" in the bottom and an 0-ring beneath that. Note that the filter ever only cleans part of the flow anyway. Cheers, John Clucas

It took me only a few minutes to find an alternative oil filter.
I measured the canister and floating dish plate - height 3.7 to 3.9", maximum OD 3", minimum ID 1.125"
Wix Filters wixfilters.com has an online catalogue with filters arranged according to size.
Wix #57062 - height 3.740, OD 2.814, ID 1.22 fits the bill;
nominal micron rating 6
Beta ratio 2/25/75 = 4/7/0
The beta ratio is the number of particles upstream vs downstream as a measurement of the efficiency of the filter.
http://www.wixfilters.com/assets/TechBulletins/WIX/ISO%20Cleanliness%20Code%20English.pdf
Also used on Dodge, Freightliner and Mercedes Sprinter vans and Jeep Grand Cherokee.
$5.79 at rockauto.com

The seal at the top is a square section o-ring same size as Mark V for which I already have a package from Mcmaster.com
There is a felt ring hidden under the dish plate, and I think I’ll use a rubber o-ring there.
On the bottom there is a rubber flat washer 1" OD x 5/8" ID x 1/8" thk which I have not found yet, will try Home Depot tomorrow.

I cleaned the canister and it looks like the brass label had brown paint in the background areas, could that be right?

I cleaned the canister and it looks like the brass label had brown paint in the background areas, could that be right?

Could well be, the repros I made had black background, But there was none of the original paint to copy from
The rubber washer under the head of the bolt needs to be an accurate size to fit in the machined depression in the base of the canister. We had the gasket maker punch them out…
I n the context of filter efficiency, the first SS Jaguar engines had NO filter. Probably because Tecalemit didn’t have them ready. I must say running my 36 engine without the oil filter[ and they had no air cleaners either, when we pulled it down for a refresh a couple of daces later, it hadn’t done it any harm. Although I don’t drive it down dirt roads[ much] or across paddocks.

Although if one is concerned about filter efficiency, as the actress said to the bishop “size counts”

Surely the bolt you refer to is indeed Whitworth.

I was looking for something of relevance amongst all my Tecalemit Catalogues, which although comprehensive post-war, is minimal pre-war (or pre post-war resumption of production). I have a reasonably comprehensive October 1941 TEcalemit Catalogue, that does not actually list the various pre-war Tecaemit Oil Cleaners, but at least it does list the Elements.

There is nothing in post-war far more comprehensive catalogues that lists or cross-references an O.F.2152, or indeed lists any Oil Cleaners/Filters for and SS/ Jaguars earlier than 1945 1-1/2 litre (Mark IV), and indeed 99% of listed filters now showing an FG prefix, with OF prefix filters now obsolete.
The post-war catalogues give photos/details of all there current range of oil-cleaners and filters, but nothing even looks similar to your pictured Oil Cleaner. Do you have an Oil Cleaner number - likely to be or have been on the plaque attached to your canister.

Surely the bolt you refer to is indeed Whitworth.

I think the thread was UNF. 9/16"maybe , comes to mind , I had to make them using Whit bolts shortened as donors. But definitely fine thread.
The tube that threads into the alloy housing is of course Whit. { or UNC] 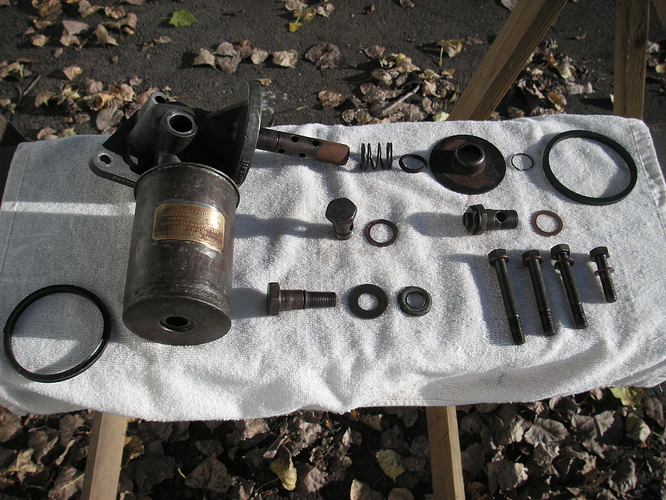 oil filter parts.JPG2560×1920 780 KB
Note the clean towel this time.
The filter number on the label is indeed OF2152; thanks for that tip as the O is imperfectly stamped more like a U and the F is damaged so I wasn’t sure what they were. 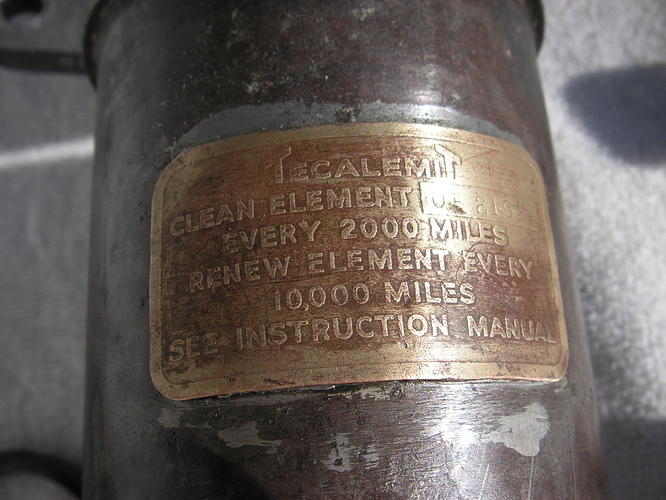 Tecalemit label.JPG2560×1920 829 KB
Interestingly, with the non-adjustable relief valve, I was wondering how they put it together. It looks like they bored through, counterbored, put in the stopper and spring, then put in a plug in the hex head end and soldered it. 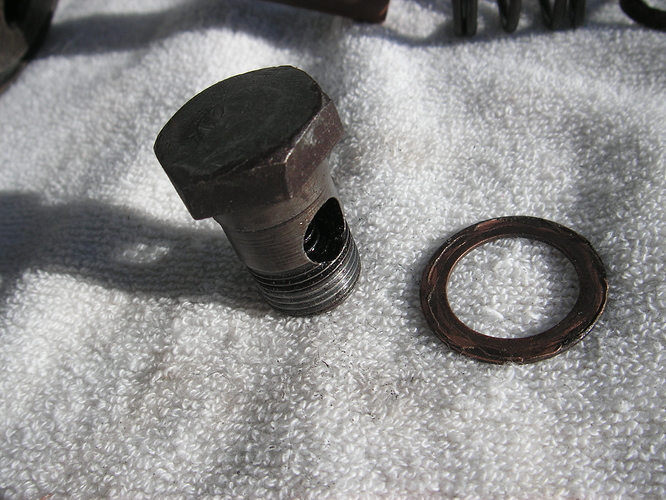 relief valve.JPG2560×1920 773 KB
I did notice while looking for something else in the brochures that the Tecalemit oil filter is not mentioned in the 1936 brochures but included for the first time in the 1937 brochures. 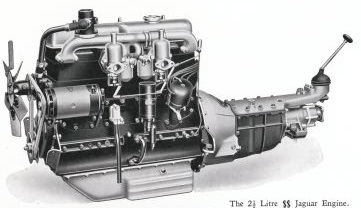 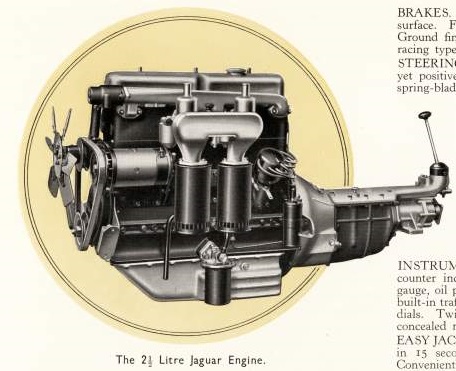 Rob
Yes that is ho wthey were made. WEmade a batch of ne wones mayyears ago
The bypass valve has quitelow spring resistance, as it’s only balancing pressure inside and outside the element. I just put and original on kitchen scales and pressed the plunger till it moved and saw that it was about 4 lb[ from memory]
Bought some light springs at te spring works. put allthe bits in and blocked it of with a threadedbrass plug.Screwed until till got the desired pressure [ on same scales. Then with a big soldering iron, very hot, just soldered across the top.
I noticed letters stamped i n the solder [ different for the 1937 to the 1938/9
So stamped them in as well… If you are going to fake something, might as well do it properly.
Of course the 1936 engine shown has no oil fliter. Isuspect because Tecelemit didn’t have them ready [ the SS1 only had a separate filter via pipes] So Bill just sent them out witha 'U" shaped pipe instead. later filters were made as some sort of after market arrangement. Alan Gibbins had one so we coppied it and made a small batch 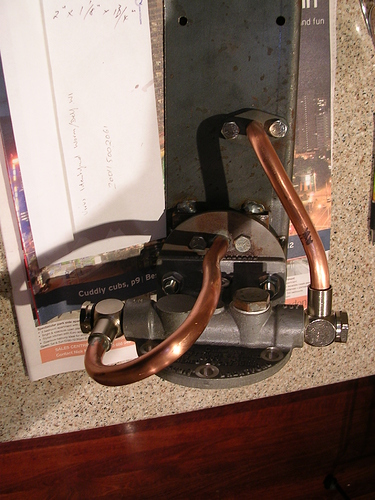 oil filter 002.jpg1536×2048 882 KB
I don’t think the tecalemit plate on the canister had brown backgrund. Just the brass tarnished where it was not rubbed. The ones I have had no trace of paint. I had them made with ablck background, but realistically they may well have not had any background colour. 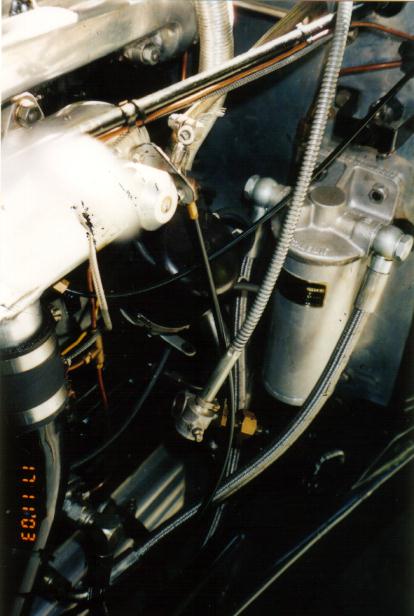 Reporting back to close out this thread.
The Wix #57062 element was indeed the correct size. 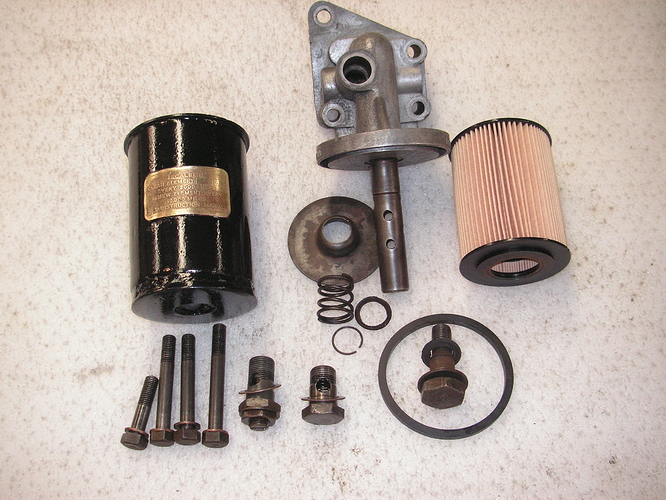 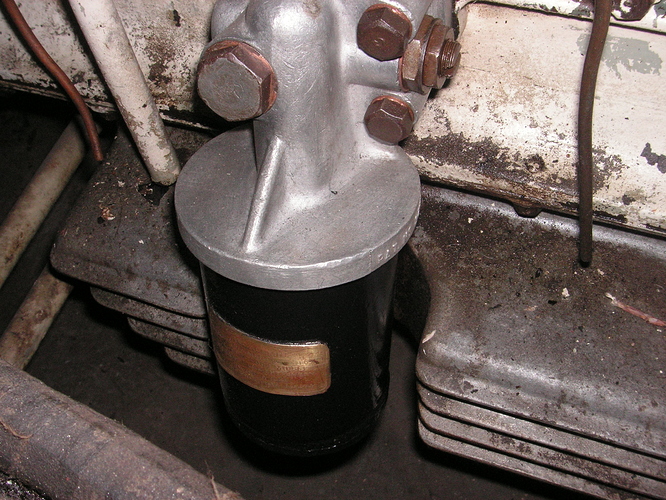 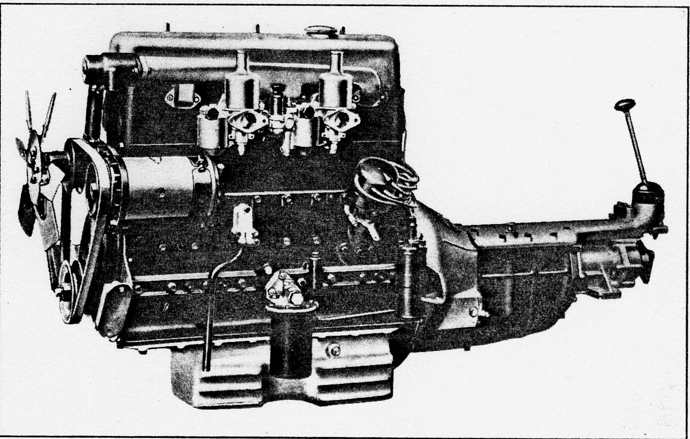 Adding this information for completeness in this thread.