SS1’s, I have seen multiple examples of these with green painted engine blocks.

Does anyone know what the correct color is for 1934?

Starting to wonder if earlier cars the blocks were originally green and if that changed sometimes later on production. Specifically when and what did they change it to?

Jaguar bought their chassis and engines from Standard. Was Standard or SS strict about installing/receiving the correct badged casting? Or were standard manufacturing rules of “ship it and bill it” in effect?

I would have thought SS would have wanted their logo on the block but not sure?

Is Ed still with us? He would know more about the side valve engines.
It was my understanding that the side valve engines were taken directly from stock at Standards, and would have normal Standard serial numbers, not have anything special about them.
With early Weslake head OHV engines, there was an SS logo on the block, since these were made specifically for SS Cars, but used Standard serial numbers, until for the '38 model year they began using the L and M series numbers. Here is 10467 with engine 249971. 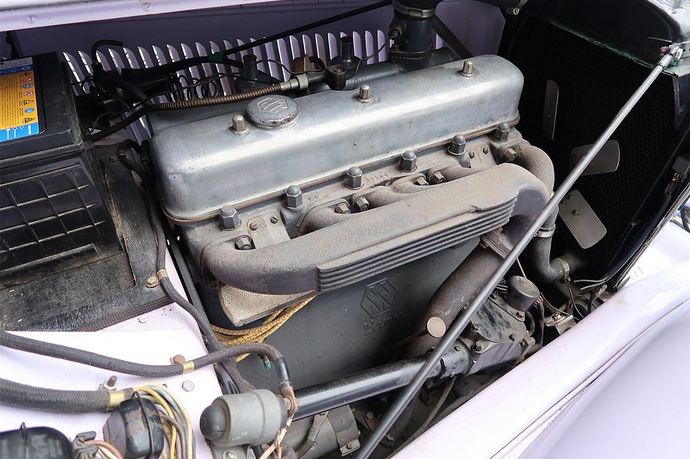 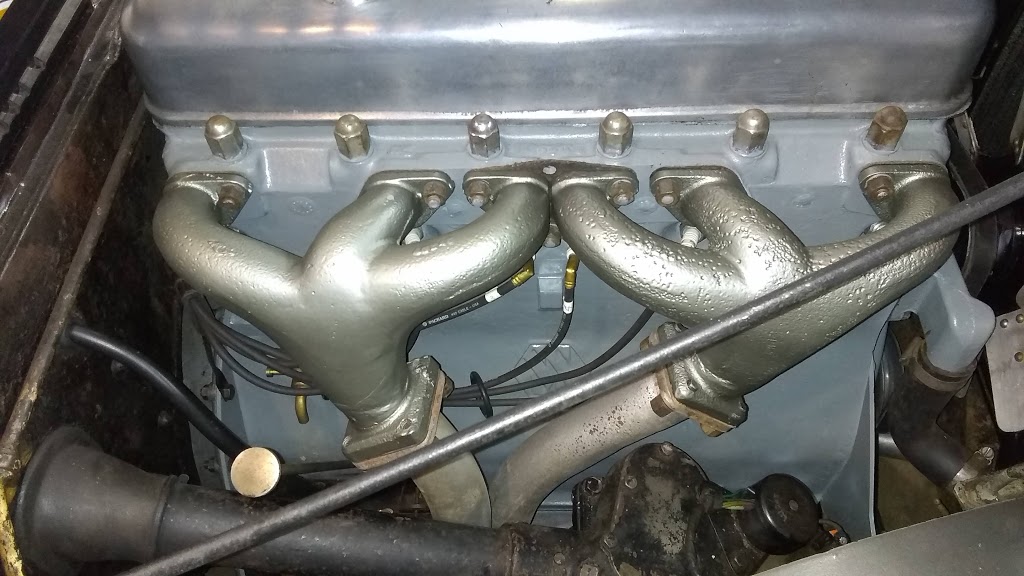 Is there any real difference in performance, between the two?

6 cylinder sidevalve engines are marked
16 hp or 20 hp.
Peter B

Thanks Peter. Were they different from regular sv Standard engines? Standard is virtually unknown here.

Were they different from regular sv Standard engines?

Scroll down to the bottom of this.

This issue came up after a search that lasted 15 years for me to find a correct engine.

Regarding differences between Standards and SS engines…
The oil pump and crankcase are SS specific items.
The intake, SS offered a single carb or a dual carb option on both the 16 and the 20HP versions. The bonnet being considerably taller on the Standard, meant those ran a down draft carbwith a taller intake. the SS had side draft units with a lower build height to clear the lower bonnet.
SS’s came with RAG’s for carbs. Not positive but the Standards came Solexes. RAG’s had some quality issues, they are pretty thin on the ground these days. Any carb that needs a “drip tray” to keep the gasoline off the exhaust manifold is not likely to be chosen a second time which is why Solexes became popular.
I have seen SS’s with both SS logos and Standard logos. The fact that there is an SS logo on a flathead meant that at some time, Standard cast a specific block for SS. Whether this was the case initially when SS first started, or if it continued all throughout production, I’m not sure. Seeing that engines were replaced in these cars for a variety of reasons, that also could explain some of the Standard logos. Obviously there were no SS logo’d Standards.
Standard’s were sold with a cast iron head and SS units had an aluminum one.

Regarding Weslake, he was an independent contractor to just about anyone in Coventry, including motorcycle manufacturing. While many in the industry utilized Weslake’s talents, including SS and Jaguar, it was the “on record”, the collective opinion of the Engineering department thought the designs were successful in the prototype but did not tranfer well to general manufacturing in yielding the same gain of horsepower.

I would surmise that Mr. Weslake was very talented but seeing the work was done by hand, to get consistent gains would have necessitated Harry Weslake “blueprinting” each head and intake.

The SS flathead block is related to the OHV with crank spacing/bearing being the same.

William Lyons saw an opportunity to purchase Standard’s tooling on the six cylinder and moved quickly to do so. Later, Sir John Black had a change of heart and wanted to rescind the sale. Lyon’s rebuffed him.

The animosity must have been expected as SS1’s ceased using Standard’s frame and running gear and finished production with Rubery Owens making the frames.

Makes me wonder if this was some measure of retribution was enacted by Standard’s John Black?

Peter or Rob…any clue what exactly the 25HP refers, a flathead or OHV?

Never have seen this designation mentioned before?!?

25hp surely refers to a 3 1/2 Lovell.
Not sure re the sidevalve crankcase/block, being specific to SS,
or do you mean the sump.
Never seen a sidevalve with the SS logo.
Peter B

Very interesting, thanks Peters and Lovell.

You guys should get your country flags up in your preferences, it helps.
Some people put up the wrong country flag, which I don’t understand at all. 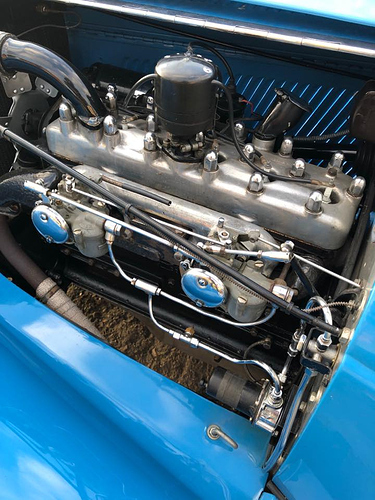 Would have thought the upgrade to OHV was worth more than just 5 HP.

The 3 1/2 surely would be considerably more. 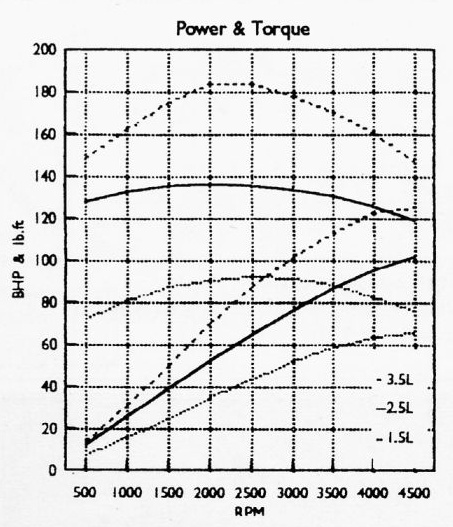 The tax horsepower or taxable horsepower was an early system by which taxation rates for automobiles were reckoned in some European countries such as Britain, Belgium, Germany, France and Italy; some US states like Illinois charged license plate purchase and renewal fees for passenger automobiles based on taxable horsepower. The tax horsepower rating was computed not from actual engine power but by a mathematical formula based on cylinder dimensions. At the beginning of the twentieth century, tax...

Peter, i agree, but it seems surprising that the 2 1/2 Litre OHV has no increase in taxable horsepower when compared to the 20HP Standard Flathead.

We know that is untrue.

That was just one of the anomalies of the silly system.

The RAC HP website linked by Peter explains the anomaly.
The RAC set three parameters with the assumption that they would not change.
(1). Mechanical efficiency at Vm is 75%
(2). The mean effective pressure Pm is 90lb/sq.in
(3). The mean piston speed Vm is 1,000 ft/min , i.e. 2 x L x N = 1000 ft/min
All of those were changing by the mid '30s with engine improvements, but since this was only used to set the tax rates, they apparently didn’t care to change it.
Manufacturers realized the marketing value in higher hp claims but lower tax rates, so many cars such as MG were advertised and even named by both their RAC hp and their actual brake hp.
I see the Mark V 3-1/2 rating is 25.01 and actual is 125, where the XK120 rating is 25.6 and actual is 160. That extra mm of bore in the 120 made a 0.59 difference in the RAC calculation even though the stroke was 4mm shorter.
I dug out my 1969 Illinois title to the Mark V and I see the hp is given as 28.1 and I remember in those days the yearly fee was higher for hp over 30.
The wiki link to taxable hp says the US followed RAC practice. I have a bad habit of clicking on reference links and got onto one about George Selden and his patent battle with Henry Ford, very interesting history. Selden’s patent on the whole idea of a motor car was eventually upheld, but only if powered by a Brayton engine, which was a kind of forerunner of the diesel, but didn’t work very well, could hardly move the car he had to build to prove his case. http://www.kcstudio.com/selden.html