Does anyone know if there’s a modern geared starter motor available for the MKIV 1.5L … I’ve had bad luck with refurb Lucas items and I put a WOSP geared motor on my Star Sapphire and have been VERY impressed by it.

I;ve used the original starter motors in all my SS/ Mk IVs for about 40 years and not had any problems… There is very little on these cars that is improved by altering to modern technology t

I agree totally with Ed. I only converted to negative earth because I wanted to install a tracker but to be honest, after initial enthusiasm I am now less paranoid a less likely to switch it on.

I rebuild my own Lucas parts if I can, rather than trusting somebody else to do it right. Here is the starter for my '38 saloon.
Before: 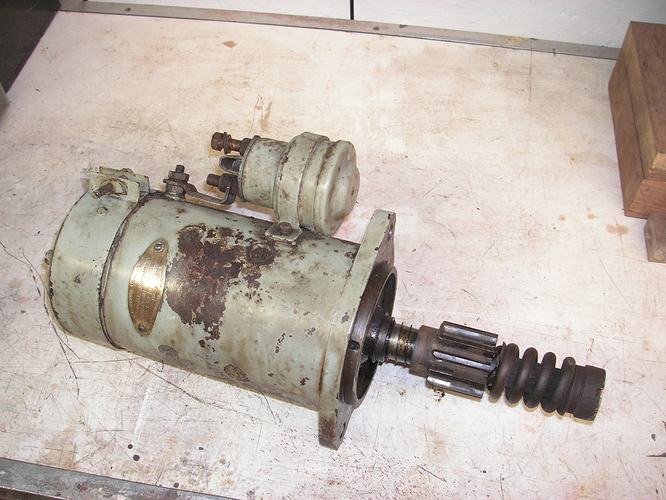 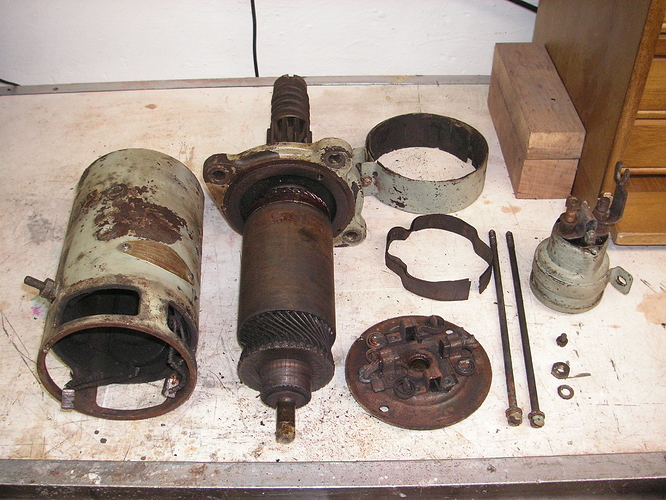 PICT0004.JPG2560×1920 894 KB
I sandblasted the rear cover, gently so as not to damage the insulator parts, and then, rather than using the original paper insulator ring you see in the picture, I smeared RTV silicone on the brush wires to insulate them.
There is another paper covering held inside the steel band with bifurcated rivets, supposed to keep water out, which I replaced with new rubberized paper smeared on both sides with RTV silicone.
I cleaned the commutators with fine steel wool.
Cleaned the armature and smeared grease on it.
Did not remove the poles, just cleaned them.
On the solenoid, with all the nuts removed I found the studs were free to move a little bit, so I rubbed them against the contact inside which probably cleaned them up. It works anyway. The fallback would have been to rig up an XK120 solenoid which are readily available.
After: 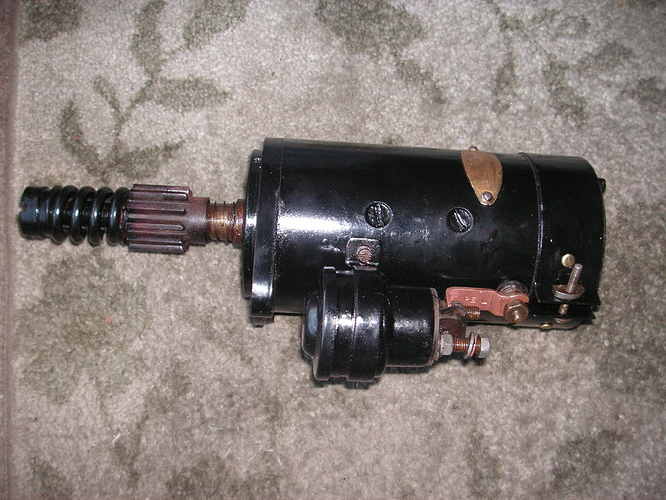 Does anyone have a source for the Lucas ST-810 solenoid and bus bar?

I smeared RTV silicone on the brush wires to insulate them.

Rob,
Two things.
How about a close up photo of the ID Plaque.

Secondly - I don’t pretend to know the idiosyncrasies of SS Jaguar electrics, but your before photos look very much like this starter was originally painted GREY, and in all sorts of locations that strongly suggest not a previous repaint, but clearly you have chosen to repaint it black. What have I missed?

Sorry its back on the engine with the tag up against the block so this is the best I can do. Date is 9/37. 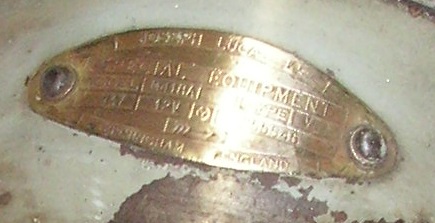 This engine has been the victim of a mad painter with pale green paint, except the fan blades which he painted red.
But the flange at the pinion end was black where it was inside the bell housing, and there was enough evidence under the green to convince me it was all originally black, including the solenoid.

If the barrel had a machined finish, with signs of turning marks and a "Special Equipment "plaque , I think it would have had an electorless nickel finish
The material under the band was Elephantide. If Rob is wanting that extra concours point i can post him a piece
The busbar arrangement was only on 2 1/2 litre starter.
Does Ron need just a solenoid or the busbar as well, I thought his ca was a 3 1/2 litre, which had th solenoid mounted on an L shaped bracket from the top starter mounting bolt…
I think the oval plates was common to that used on the Special Equipment generators.
I think Cordel Newby used to have them for sale. { unstamped so you need good eyesight to stamp the small numerals.]
Actually I bought a set of tiny number stamps and a holder to retain then while stamping… They did work but the novelty wore off and got bored with doing them.

Both of my 38 DHCs are 2.5L, but as you may recall from our prior discxussions, when I acquired the cars thirty-five years ago, the solenoid – on both cars --was mounted on the firewall rather than on the starter body, 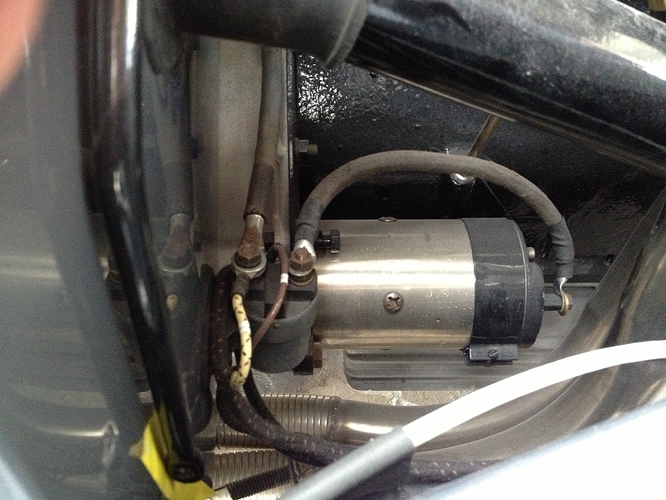 Re the nickel finish on the starter body, here’s the drawing in the '38-'39 Instruction Book – 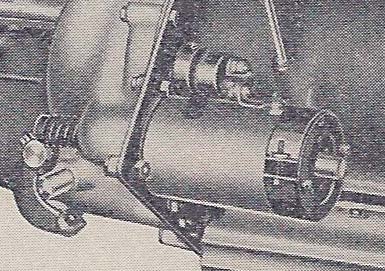 I’ll just put on my pedants hat … The starter you have has the terminal on the end, The solenoid you have is a post war type,[ Mk V and onwards] To mount the solenoid on the barrel there are, or need tobe ,2 small tapped holes
Attached is a pic of an SS100 showing the solenoid arrangement although it shouldn’t have the rubber cove on the end etc
{ And the Phillips head screws in the starter show it was post war.
If you get stuck < I can get you a pre war solenoid , 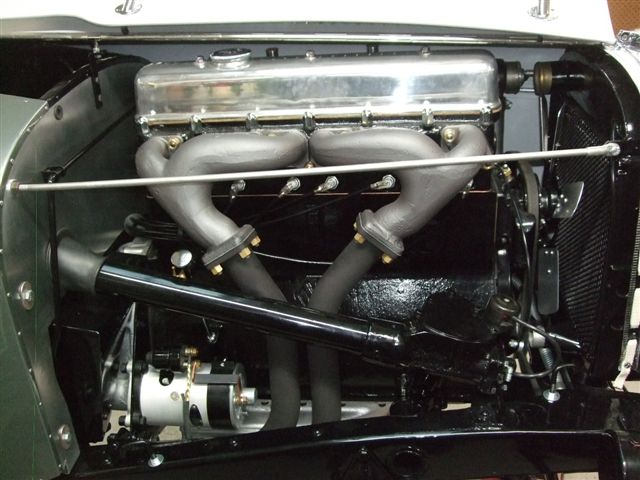 Thanks Ed, can you supply the solenoid, the bus bar and the other proper bits to mount it on the barrel?
Ron.

I can get you a solenoid of that type. The busbar will depend on the starer motor. I haven’t seen a 3 1/2 litre with a busbar arrangement.Although they may exist , The pic of the SS100 also has a post war starter motor.
MY opinion is that the 3 1/2 litres had the solenoid mounted facing sideways on a bracket from the starter mouting and a heavy duty cable from solenoid to the end of the starter. I’ll take a picture tomorrow when it’s light.
The 2 1/2 litre has a smaller starter motor than the 3 1/2 litre.

Ron, the photo you post taken from a 38/9 book does, in fact , show
a 36/7 with a ST 200 solenoid with a removable brass end cap.
Making the end cap easily removable enables activation of the solenoid,
manually as per the post war models. Can be handy sometimes!
Anyone stuck for one of these starters can utilize a M45 inertia
starter fitted to a MK1/2, as long as you have the 3 bolt end flange.
For the turned nickel finish, cut in a lathe with a fast feed rate,
Peter B 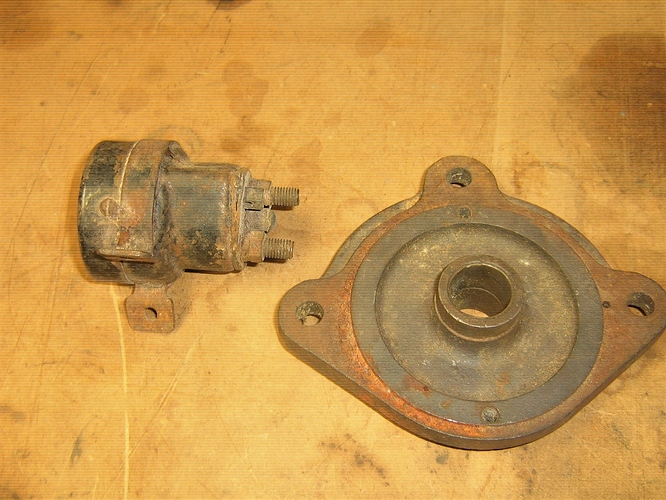 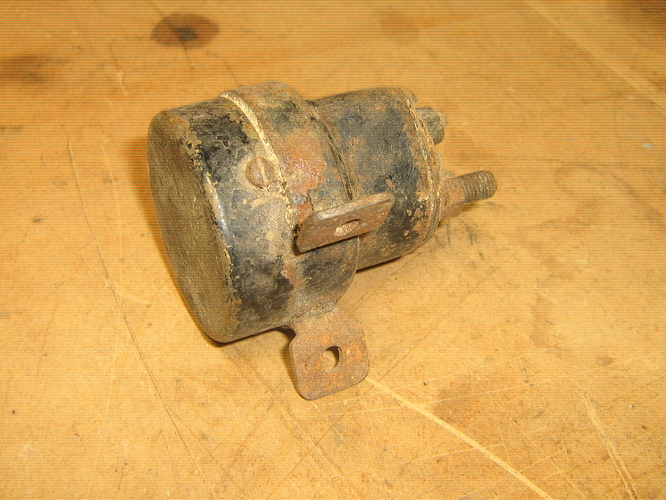 I’ve wondered why some solenoids had that end cap. A different shape to normal which were held on with a spot of weld.
The parts book lists the solenoid as a Lucas ST.810
It seem untypical of Lucas to have thought about making life easier
I suspect in those days a quick screwdriver across the main terminals would have bee the fix.

would have bee the fix

Yes accompanied by a good buzz.
BTW 36112 has appeared on SS data. The wheels are laced double
overlap as are the wheels on the Heritage SS100.
I have noted others. When did the change take place, or were single
and double overlap concurrent?
Peter B.

Pre war the wheels had the outer spoke overlapping only one other
Post war it was changed to over lap 2 others I doubt it was a Jaguar decision more likely Dunlop
If one orders new wheels from MWS in UK, what ever they might say , they spoke them in the post war pattern.
They charge extra as a special order to do them correctly
They claim to have original drawings which show the pre war pattern on SSs. I sent them pictures of cars taken new at te factory clearly showing other wise.

I got a" hmmmm "reply but they were still going to charge extra.
I 'd say the change was made when stocks of the old wheels ran out, in the same way as early mk IVs had SS series engine blocks and knock ons.

Ed, there is pictorial evidence that the double overlap outer spokes,
in conjunction with smooth wheel centers, were extant pre-war…
While It is correct that factory photos show single overlap, I note pre-war cars fitted with smooth center/double overlap outer spoke rims.
As you state Dunlop would have changed the lacing pattern not SS.or
Jaguar.
I suggest that the change in lacing pattern was circa mid38 through39. Other than the factory photos, can you provide evidence to the
contrary…The MWS drawings might be correct for the period I
suggest. The photos show what looks to be a untouched pre-war
3 1/2 saloon and 36112 DHC. I can provide other chassis numbers
if required.
Peter B 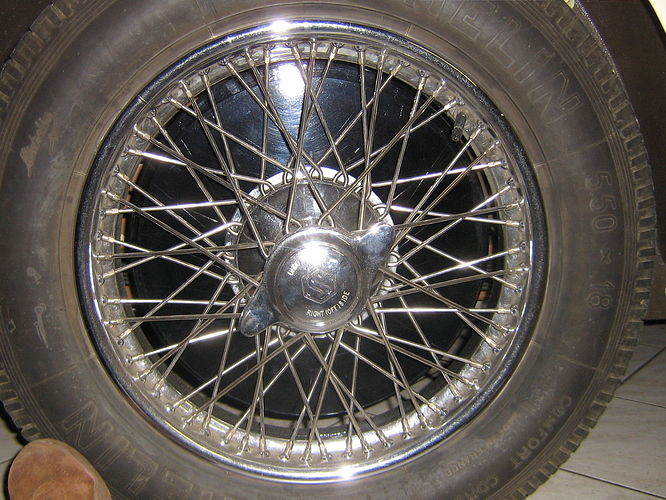 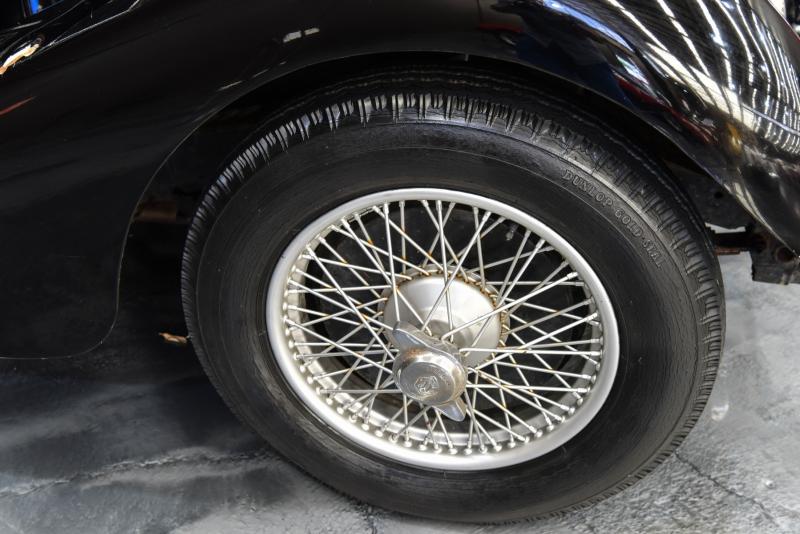 I don’t think current pictures prove much each way.
And chrome plated wheels on SS were at best rare,originally , but more common as an after market "improvement."One would have to say the chrome as shown would not have lasted to now and so would have been re plated. And that leads to the question of when was it plated and why would we assume it was plated originally.

Looking through pictures. but confining my self to contemporary pics i can see a 1940 2 1/2 litre saloon taken in Switzerland very early days [ 1956] shows it with the early spoke pattern.
Unfortunately some other pics which might have helped had car with Ace wheel discs.
BUt I’d be inclinedto believe the change was just post war.