Starting after 3 months under cover

1998 X308
I have had the car under a car cover for the last 3 months to protect from leaves, tree sap etc, and haven’t touched it during that time. Totally fine before fitted cover.
Once, the alarm kept coming on, which I’ve never known before. Had flat battery last week, 3 volts, so removed it and fully charged it. Removed cover today and refitted battery.
On attempting to start, it was making a very strange noise and didn’t start. Not like a normal turning over, and not starting, but quite an alarming noise. I stopped and tried again, and just kept the key turned. Eventually it did start, very slowly, and the revs built up.
At which point a “Low engine coolant” warning flashed on for a few seconds, then went off. I ran the engine for about 10 minutes until it reached normal operating temperature, revved it a few times, and it seemed normal, and the error message didn’t come on again.
I turned it off, but was too nervous to try again, and it was getting cold and dark so also didn’t check the coolant.
Any ideas, as I can’t believe anything has broken while it was sitting there. And I have left it for a month or 2 in the past, but never had this, but never left it this long.
Also, if there was a problem with the coolant level, would the message keep flashing up/stay on, or would it only go on once at start-up?

I would guess that after three months of cold weather your battery is shot and can no longer take the load of starting the car, even though you have charged it. The strange noise was most probably the starter solenoid chattering because of low battery voltage, before it finally engaged. My X350 also sits under a cover most of the winter but I have one of these https://bit.ly/3wmjKDH which I have fitted permanently in the boot in the battery compartment and this keeps the battery healthy. The low coolant warning probably came on because you have a small coolant leak. After the engine warmed up, the coolant level would automatically rise and the warning would go off. Just my guesswork, but others may have different advice.

It’s not the battery: it’s only a year old, and I fully charged it before replacing. I’ve had a low battery before, and it just turned over slowly but started. I would have a trickle charger but it’s not parked near any power. I couldn’t work out whether the strange noise was something to do with the starter motor/flywheel, or the engine itself. But both were totally fine 3/4 months ago, and I’ve never had anything like that before.

My money is still on a bad battery. JMHO

Start it again and if it goes well drive it around a bit.

Yes, will do. Bit cold to go out at the moment.

I did notice when it was “cranking”, when all the dash lights come on, there was a “check engine” warning light on the left hand dial, which might be a clue? When it actually started this wasn’t on.

My 96 x300 spends about 5 months a year on jack stands in my Florida garage while I summer just off Cape Cod. A few things I’ve learned over the years have been to use a battery minder to keep the voltage peaked, add fuel stabilizer to a topped off tank (minimizing condensation) for our US gas. Be sure to run the stabilized gas through the engine prior to putting it on stands. I’ve had the gas go bad in the engine after I had only added Sta-Bil to the tank. The old girl was hesitant to start with the bad gas, but the battery had enough to crank out the bad and get to the good stuff in the tank and go. Not much help to your current woes, but a way to avoid them in the future. Good Luck.

I disconnect battery when parking up.

It will be charged when I need it and increase its life.

That’s the way , no problems

This is my solution, no power points close to the car as it sits outside all year round. 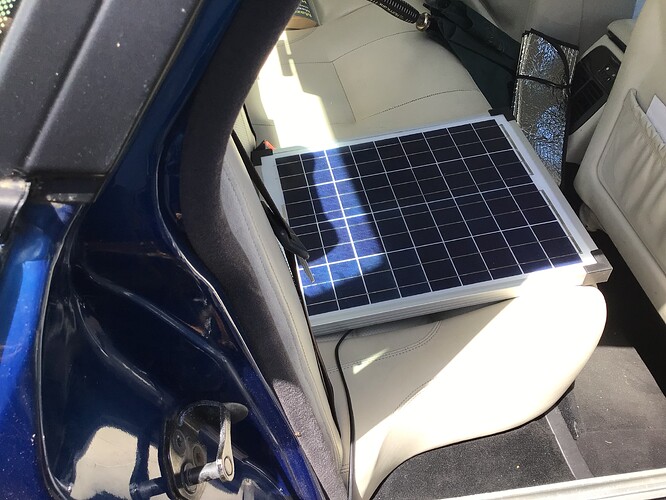 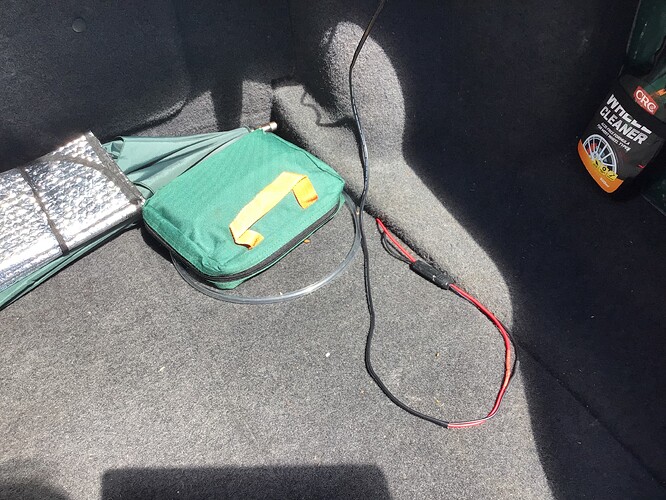 And just because the battery is a year old doesn’t mean its not gone rogue, my X Type was occasionally exhibiting a slight misfire at <> 1,500 rpm and when starting up it wasn’t a ‘clean’ start a bit hesitant and would almost die. one day the battery light came on and I assumed that the alternator was crook, obtained a 2nd hand one and sent it to the sparkies I use, nope Robin the battery has a faulty cell. Changed the battery and the mis went away and the start up was back to what it should have been nice and steady tick over from the get go.

Excellent solution if you don’t have a power point close by. I have one of those on my Honda and it works a charm. It needs to be positioned where there is the maximum direct sunlight. I can’t use one on the Jag because the Jag is under a car cover.

It wasn’t the battery, which I knew because it was fully charged when I put it back. 4 days later, and it’s kept its charge.
Well, it started okay this time. So not sure what the strange noise was, and was really struggling to start, but presumably something to do with the time I’d left it. Note to self: Never ever leave it 4 months again without starting it.
I am aware that it’s now a 25 year old car, but after owning it for 16 years I’m very attached to it and don’t really want it to die.

And when you do start it make sure you run it up to temp, they do not like a short power up and then shut down.

I always do as well aware of the “just taking out of garage” problem, where the engine floods with petrol if you just start and stop it quickly and you then can’t start it. Happened to previous owner, and I have huge Jaguar main dealer invoice to fix it!

For what, taking a few plugs out and cranking the engine?

Not even that, just floor the accelerator and turn over, unless the constant starting and stopping has fouled the plugs, I did that with my old 2.9

I only know about bmw v8s, great engines that can and will flood and kickdown helps, but when they flood (because someone keeps trying to start it) only removing plugs on one bank, cranking forever, kickdown of course, and only then putting them back in helps.

Nope with the Jags no need to remove plugs, just crank and keep cranking they eventually clear and fire up.

So you can floor the accelerator, or at least press it a bit to start, as I always just leave it alone?