Work continues on putting right my new V8 which was previously restored by a Jaguar specialist. The choke would not operate fully up and down the slide control so means starting from cold is difficult. I sorted out the engine end but realised the problem was behind the dash where the outer cable cover was fixed too near to the lever so it would not go fully down. Also the choke light did not work and now I can see there is no choke light it has not been fitted! Quality work… Also the dash was held on by 2 fixings instead of five - just lazy. A bracket around the cables from the gear shift lighting was dangling behind the dash and there is no bracket under the steering wheel as that is missing too.
Now whilst dismantling what was left I had to undo the steering column bracket and several U shaped spacers fell out with another spacer between the two fixings. Anyone know how these go back? I think they were fixed above just one nut but couldn’t be sure.

If these are the spacers in question they adjust the steering wheel / column to suit, sounds like someone didn’t have enough of the correct spacers ( as shown ) so made some individual items. 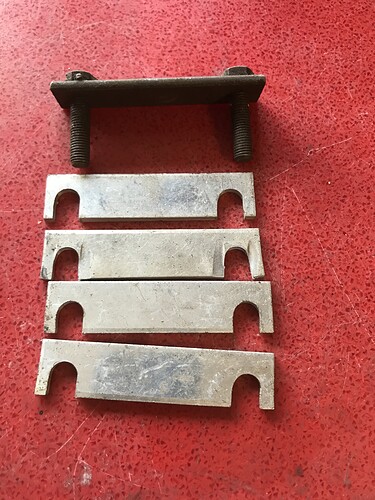 This is what fell out… 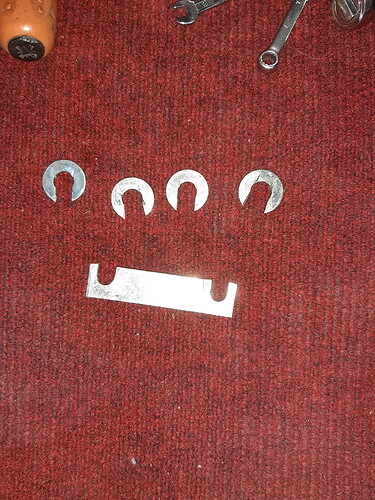 Home brew, the bottom one is correct.
Any number 1 to 4 / 5 depending where you want the column / steering wheel to sit. The fixing bolts are welded to a strap as shown. 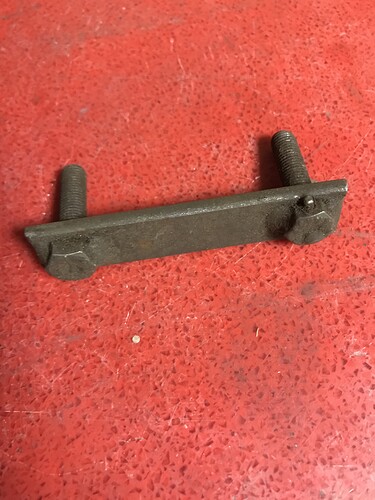 OK so it’s just for setting the height of the column and balancing left and right bolt fixings.
Now before I can put it all back I need to wire in the choke light. I have the bulb holder and cable off my old car so I know it connects into the loom. I have checked the switch and it works. I only have one cable to the switch so I need a cable from the switch to the bulb earth to make the circuit. How is an earth connected to the choke lamp holder? I can’t see any way this was done.

Sorted this problem today. Found a photo on Google of the rear of the dash and can see a cable screw terminal was somehow fixed to the red lense holder for the earth but not something you can buy. I used a large ring terminal over the back of the bulb holder and soldered this in place. I now have choke light working.