The six chrome step beads on my '38 SS were loose and all cattywampus when the car came to me, so they were one of the first things I took off and stashed away.

I dug them out today to see what to do with them, and I discovered one is wrong, too short and different cross section, presumably a replacement in the 1950s.

I bought mine from Robeys 20 years ago. I believe they are the same as ones used on the E-Type boot (trunk) floor, and they would cut them to the required length.

I presume that’s MartinRobey.com
Yes, the same cross section as Mark V boot floor and tool lid.
The part number seems to be BD332 Luggage Rail with a /x suffix and comes in various lengths for E-Type or Mark V.
I’ll try contacting them.

The strips for my 1938 SS100 came from Robey about a year ago. The cost of shipping one strip to the US made it attractive to go ahead buy a complete set which shipped for the same cost… Dave

I installed the five chrome strips I have with screws and nuts.
Then I tried installing the rubber strip. An hour to do one, that’s one inch a minute.
There has to be an easier way. I wonder how the factory boys did it, bet they had some special tool, anybody know?

Or did they put the screws and rubber in the channel first, then install it on the fender?
The SPC says use either screws and nuts or Pop rivets. 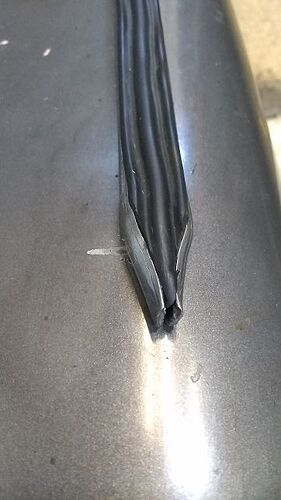 Hi Rob. You might find that the stubs of the pop rivets are too high when fitted from below and will create a line of bumps in the rubber. Screws do the same thing but are fairly low.

As for a trick to insert the rubber - well there must be one and I imagine they had a tool that worked similar to one that fits locking beads in windscreen rubber. It’s a decade since I did mine and I recall it was tedious. I think I used a paint scraper to push the free edge down after the rear edge was seated. A little liquid soap on the metal edge helps. I also cut the strips about an inch longer than the retainer, pushed each end hard into the tip and worked along from each end to the middle. My theory was that rubber tends to shrink over time and maybe this tactic would delay this. All those on my car had shrunk when I got it.

Thanks Peter. Paint scraper sounds better than the rounded end nail puller I was using. I did try windshield washer soap but it was too thin so I’ll try dish washing soap tomorrow. Good idea about the shrinkage too.

Thinking about it, I bet it was some kind of tool with a special curved end, so you pulled it along like a plow.
I can’t believe Lyons would put up with paying 6 hours labor per car for a guy to put these in.

Perhaps my rubber is softer but I just enter one side and push the other side in with a flat bladed screwdriver. It’s something I do regularly because front seat passengers are inclined to swipe it with their feet as they get out.

Possibly, or your channels are slightly wider. It wouldn’t take much to make all the difference. My rubber came from Worcester a couple of years ago. There was none on the car to compare.
I was afraid to try a screwdriver because I thought it would tear the rubber.
My paint is at least 60 years old, some of the screw holes were painted over, made a couple of new marks in it, can’t imagine doing this on a car with fresh paint.
Just dolling up this old gal a bit because I’m going to an all British car show next month and didn’t want to look quite so much like a barn rat.

I’ve never penetrated the rubber. Perhaps that’s an indictment on the sharpness of my screwdrivers?

I pulled off the one I had started and did it on a work bench. Much easier that way.
It went back on the car ok.
Then discovered I couldn’t open the front door. It scrapes just a little bit.
Probably some misalignment in the front wing. Back off again.

I heard from Martin Robey. They were not much good, said they had a 39 inch but would not make a 60 inch. Disappointing. I told them if they have the rolling dies they can make any length. I would even take it without holes. No response.

Thinking about it, I bet it was some kind of tool with a special curved end, so you pulled it along like a plow.
I can’t believe Lyons would put up with paying 6 hours labor per car for a guy to put these in.

They might have just dropped the rubber lengths into very hot water to make it more pliable?

I tried SNG Barratt. They also have 39 inch. I asked if they could make a 60 inch. They said they are actually the manufacturer. They refused to make anything longer than 39", would not do a special, would not do full sets either. No reason, just refused, said they are not able, apparently not interested in the '38-'48 market.

Try Woolies Trims in the UK - I purchased from them in 2018 a roll of rubber step beading for my MK IV to then cut to length myself as I needed it. Unfortunately the “big guys” are only interested in standard stock parts - take it, or leave it!!!

My car was missing its beadings when I bought it and I confess that I cheated by using aluminium extrusions. 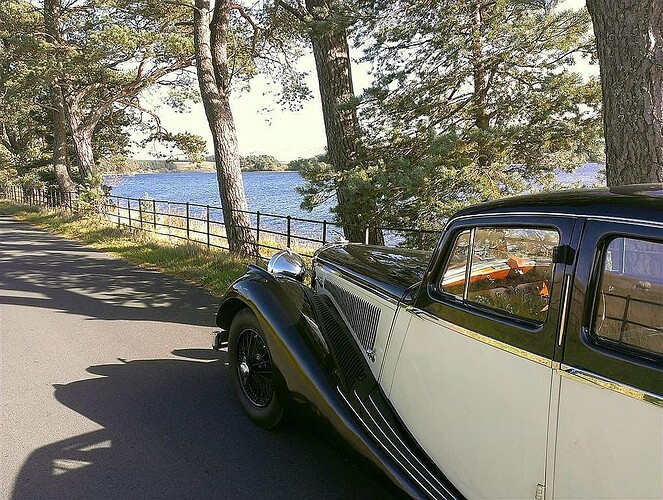 I have the rubber insert in a roll from Worcester Classic Spares. It appears to be the same rubber as Woolies in Peter’s link.
It’s the chromed brass channel I am missing.
If I knew where Barratt’s rolling mill was I’d break in some dark night with my own brass and roll myself a length of it and be gone like the night wind…

Ok not really, but I once worked in a furniture factory that rolled their own steel tube out of flat coil so I know how it’s done, and I’m thinking about making some rolling dies, if I can’t find some brass channel in the right size. Google turned up a lot of brass channels.

I mentioned earlier in this thread that the chrome strips for my SS100 came from Robey. I looked back and was reminded that Alan Gibbins had sent Robey an email asking them to supply the strips to me. I could try to find the contact info if you want to try that. Dave