I recently had a JL audio system installed in my 1970 E Type OTS. JL c650X speakers, MX 4 channel 280 W amplifier, mated to MBT-CRX Bluetooth module. The Bluetooth module was mounted in the glovebox, and all controls through my I Phone, resting on the center console, which provides a convenient source. All these components are very highly regarded, and my previous experience with JL products are outstanding. I should also note that I recently installed sound deadening and thermal barrier on the floors, sides, and tunnel, topped off by new carpeting. My problem? It sounds like CRAP! The audio sounds muted and muddy. After consulting with the professional installer, and the technical reps at JL, their collective opinions are the position of the speakers, and in “stereo”, one channel is pushed through one speaker, and the other channel through the other speaker, both of which are directing the sound toward one’s feet. They hold the opinion that in 1970, the audio was probably “mono”, and not much thought was given to sound quality. The only solution (?) would be to bridge one channel, example, L channel, to the Channel 1 & 2 outputs on the amp, likewise with the R channel through Channel 3 & 4 amplifiers on the amp. This, they say, will produce mono sound which should be an improvement. Without redirecting the speakers, true stereo won’t happen. Opinions?

On my 73 S3 OTS, I have a Bluetooth capable marine amp that pairs to my iPhone and 2 6x9 tri-axe speakers I mounted in some homemade MDF boxes. I placed them on the rear shelf kind of under the folded top to hold them. Sound is adequate for the need as I am not looking for audiophile sound quality

My OTS has a period Blaupunkt radio that outputs about 5 watts so I put a small amplifier behind the rear seat and it powers the two console speakers and the two rear speakers.

With the road and engine noise, the sound is fine for me

This topic comes up often, so I finally saved my solution from last time.

Beginning in 2013, I modernized my car sound, tweaked it over the ensuing years, and finally have an excellent system.

The amplifier is hidden, the bluetooth controller can be tucked away and the subwoofer unplugged and removed for show; there is no evidence of a stereo in place, so no points deducted!

Obviously runs off your phone, which you can keep in the cubby. The system connects to your phone automatically. I think the sound is as good as it can get, hood down, in traffic or on the freeway.

Here are the details:

37-0994 Kenwood 4.2 E-Type Speakers, 6.5"|We searched high and low for speakers that would fit the narrow confines of an E-Type console. KenwoodËÇÖs latest version differs a bit, however, so we have slightly modified them to fit the existing mounting...

BD26854 Speaker Seating Ring Pair|E-Type speaker grilles are very shallow, meaning most speaker cones will actually hit the grille unless the proper spacers are used. We've reproduced a slightly thicker version of the factory part that provides the...

Aston Innovations SoundTek A2+ remote Bluetooth controller that connects to your smartphone automatically when the ignition switch is turned on, also from Amazon.com (2020):
Amazon.com 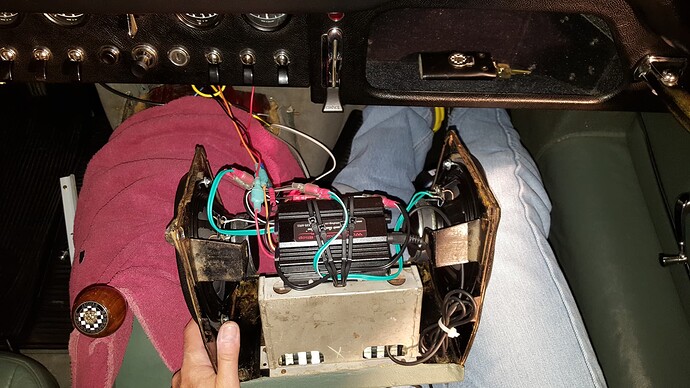 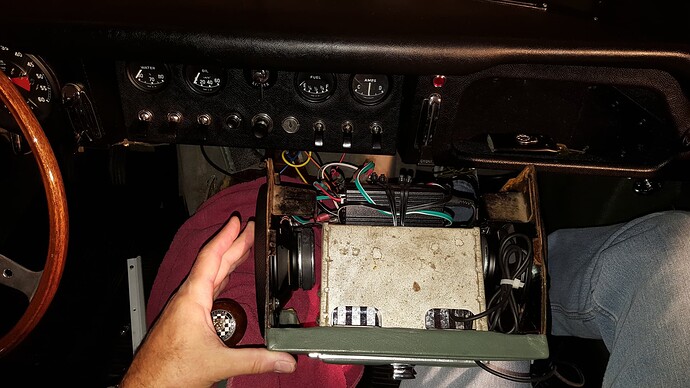 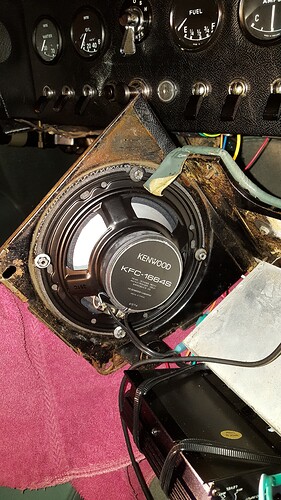 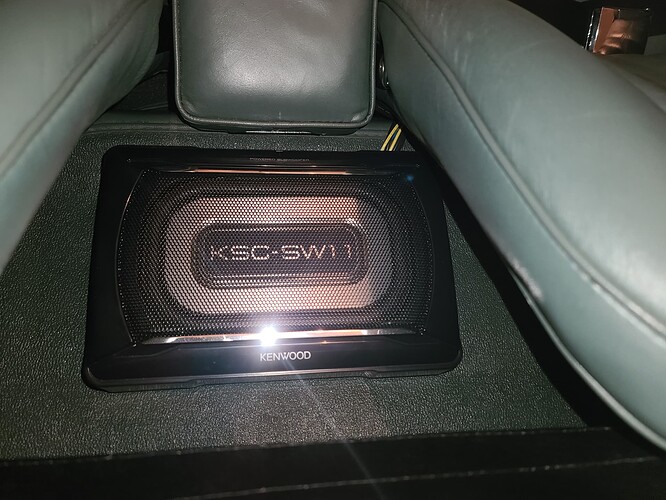 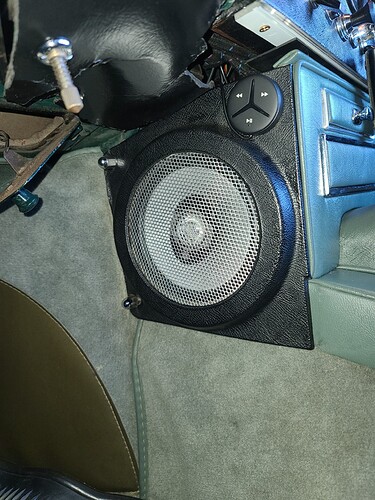 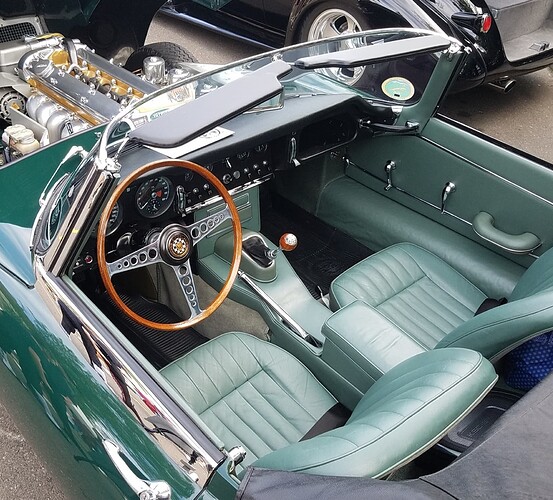 They hold the opinion that in 1970, the audio was probably “mono”, and not much thought was given to sound quality.

They’re certainly right about that. My car, also a 1970, has a dealer installed mono Audiovox radio and one speaker on the driver’s side of the console. I think the science of car audio back then was simple. If you could hear it at all, job done.

The best sound system is the exhaust. This is what your console should look like: 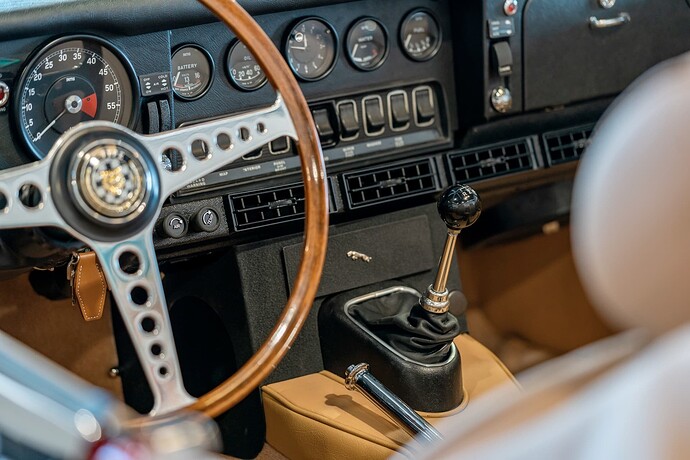 What kind if head unit do you have?
Remember, if the source is bad you will never have good sound whatever you do.

How many speakers do you have and where are they mounted?

The center console, as originally placed on the E-Type, is the absolutely worse place to mount them.
As you will only hear one speaker, playing on “Mono” mode might indeed improve things.
Also I was never fond of coaxial speakers, they are always a compromise.

In theory:
Doors are the best placement for Mid-Bass, because you have a big box behind to amplify them, and it doesn’t matter if they blast your feet as bass are not directional.
Kick-panels are very convenient for Mid-Range, reason being that they will be the most equidistant to your ears (mids are very sensitive on this)

Tweeters should be as closer to ear level and as equidistant as possible.

Do you have a sub-woofer?
Did you take care that the low signal RCA cables to the Amp are not close at any other cables? They are very sensitive to interference.

Here is my installation, albeit on a XJ that has much more room.

This is a collection of new and older upgrades I did over the years on my sound system. [Audo Instalation Schematic] . Head Unit Blaupunkt Miami CD127 Over 3 Volts stable and Distortion-Free Low Impendence (100 W) Preamp Output (4-Channel) In other words a very clean and true signal. It also has an Auxiliary Input. Very simple and understated design that I think suits the car very well. [Jaguar 008] . Amplifier Focal FP 4.75 Class A (Analogue) 4x75W RMS @ 13v (real) Signal/noise …

As you will only hear one speaker, playing on “Mono” mode might indeed improve things.

My solution works perfectly fine in stereo. I can hear both sides, though obviously the passenger side is a bit muffled. The little 50 watt per channel amp puts out plenty of power and the subwoofer has a low cut filter that allows the amp to pump the high end to the two Kenwood speakers. Before the addition of the subwoofer, the sound was marginal.

Also, as you mention, the input (source) to the amp has to be first rate. Early on, I had a cheap rechargeable bluetooth adapter, and the sound was compromised. The Aston Innovations controller coupled via Bluetooth to my phone makes for a superb preamp/soundsource combination.

Given the constraints of that tight cockpit, which, though looks luxurious is quite spartan, my intent was not to cut holes anywhere in the car. Therefore, the provided speaker enclosures were the only way to go, with the addition of the unattached subwoofer.

I know we all have our well-thought ideas for that killer stereo in our cars, but the logistics of an E-Type interior, especially the OTS, make for serious compromises, even if you’re willing to put a knife to it. It took me seven years to iron out the details, but I couldn’t be happier. 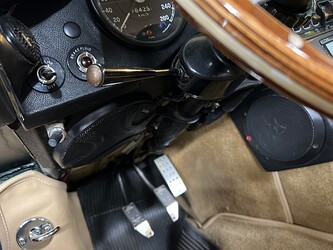 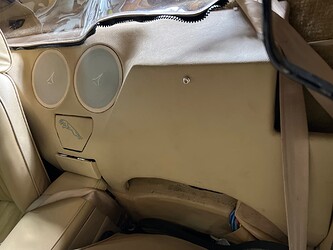 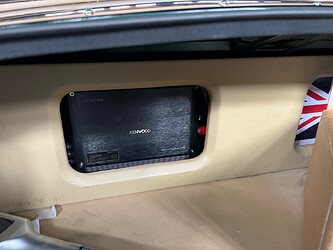 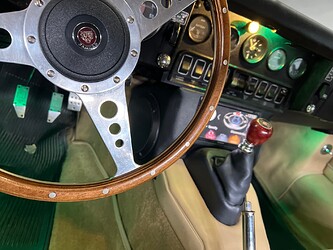 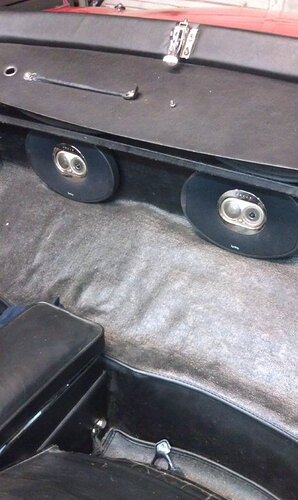 Try reversing the polarity of one of the speakers. Theoretically, that would have one speaker ‘push’ while the other is ‘pulling’ while still being stereo.

Another suggestion is to play music from the 1960s. The songs were mixed to sound good on crappy car radios. They were produced in mono, as well.

More realistically, if you can find someplace for the tweeters that points towards one’s ears, that will make the most difference. I could not figure that one out without–as you say–cutting holes in the car.

That’s a very nice installation, especially what you’ve done at the rear!

Seriously? 120 watts RMS per channel can blow your ears out in the living room of an average house. 1,000 watts? In an E-Type? Thinking there’s a lot of excess ear bombardment there, even for the low end of rap and hip hop.

Seriously? 120 watts RMS per channel can blow your ears out in the living room of an average house. 1,000 watts?

I often see products that advertise crazy amounts of Watts… and I stay away from them.
In order to produce 1000W (analogue) on a 12V system you would need 85A and cables as thick as my fingers…

It’s a digital amp not analog runs much more efficient, all wiring is done to manufacturer spec. The head unit amplifies the counsel speakers( 2 x 6inch mids) and tweaters and the amp handles the 4 x 6 inch mids and 2 x 8 inch sub woofers.

It’s a10 speaker system that produce a beautiful balanced basket full of sound at all volume levels.

@EtypeLvr and some others can attest to the wonderful clarity.

As I understand, that would be 50 Watts per channel in stereo pairs, with 300 Watt subwoofer, totalling 500 Watts, correct? That makes perfect sense, and is a nice addition to the car.

I chose to just keep mine stereo at 50 Watts per channel, subwoofer at 150 Watts, totalling 250 Watts. It allowed me to avoid putting the knife to my interior, and the volume and clariity is more than adequate in that little space for my taste.

Another suggestion is to play music from the 1960s. The songs were mixed to sound good on crappy car radios. They were produced in mono, as well.

This sounds funny but is perfectly true. I had a recording studio in the 80s, and the method back then was to build your control room to be balanced for pefectly flat sound, and you had special control room monitors (JBL 4312s in my case) for the main sound, and these tiny little crappy sounding Aurotone speakers that duplicated an average car system. You’d switch back and forth and try to obtain a balanced sound on both speaker sets.

I guess today’s music is mixed to sound good on a smartphone, lol.

BTW, I still have those sweet JBLs. They’re in my family room as part of my home theater system.

Yes it sounds awful because there is no separation in that single radio console. It wasn’t designed for high fidelity. Companies like Bose are able to deliver stereo in tiny packages due to very highly developed enclosure design and likely also spacial imaging algorithms. In the E-type the speakers directly oppose each other with no isolation so they aren’t able to function independently. You’d probably get better sound by removing the whole thing and mounting an Alexa running off an inverter.

I always thought that’s why it had twin exhaust pipes, for stereo sound…

You’d probably get better sound by removing the whole thing and mounting an Alexa running off an inverter.

In fact, a couple of friends of mine toss their JBL Charge 3 between the seats and go to town. A step up would be a Bose Revolve which has 360 degree sound.