Straight Pipes. Awesome and awful at the same time

Actually no: awesome at some times, awful at other times.

Found myself at a stop light outside a muffler shop yesterday, engine was idling unusually smoothly so on a whim I popped in and had them take out the 2 primary mufflers/resonators under the car. Been in the back of my mind to do for some time.

Ye Gods! And this coming from a guy with a Maserati GT with a sports exhaust, the car that makes Ferrari drivers mad as “their” engine sounds so much better in the Maz than where it started life, in a Ferrari 430. I do like volume.

But this is way too much. I think.

And so do my neighbours, all of those who live within a mile radius in fact. Most of whom drive Teslas.

It’s like God shouting at Moses in a movie where Moses was Charlton Heston and God was James Mason. Or James Roberston Justice with toothache. James Earl Jones shouting at his kids.

It’s awesome on tickover and light load, although the engine really does need to be in a tidy state of tune as any coughs or splutters are amplified. Obviously.

Also great on the freeway. Oddly finding myself driving at higher revs than usual, 3500-4500 rather than 3000-3500, the racetrack sound(track) is a bad influence and quite intoxicating. Really it sounds just like a racing E-Type, it makes me all misty eyed for Goodwood.

It also makes me a bit misty-eyed for Bovingdon Tank Museum, it does have a touch of Chieftain Tank about it.

The freeway now actually brings out the inner hooligan in me. Much of the excessive noise is lost in the 80 mph top-down wind, and the amount of 4000rpm that can be heard above it sounds entirely appropriate. To me at any rate, probably less so to the aforementioned locals enjoying a hitherto serene ride in their Tesla’s, where they suddenly get the full tornado ricocheting between cars.

Having pulled off the freeway to the relative calm of a stop light, ears ringing and possibly bleeding, I found myself bursting into uncontrollable schoolboy giggles, then just a head-back belly laugh. Looked to my right and happily the driver in the lane next to me was similarly smiling. The '67 Corvette he was driving instead of a Tesla likely influenced that.

The bits between tickover and 80mph though are altogether obnoxious. The quality of the noiseis fabulous, clean and sparkly (technical term) and remarkably refined on acceleration, and with some lovely cracks and pops on the overrun. All in surprisingly high definition, genuinely sounds like a race tuned car, just extraordinarily loud. Even for me.

Taking it straight back to the muffler shop on Monday, need to find a happy medium, somewhere between before and after is the way to go.

There are rumours of Cherry Bomb being the answer? Sounds worryingly like a firework, or a lady I met once in Vegas, although I knew her for somewhat less than an hour and she wasn’t much quieter.

I had a system of my own design, straight through mufflers with stock resonators, little more than perforated pipes running straight through a can. The mufflers were siamesed to improve the resonance effect. And this behind a set of large bore headers. I’m not convinced that it improved performance in any way that I cared about, but it did shake my teeth until my overbite improved. I went back to a stock exhaust system by Bell, and I have to admit, it’s an improvement over my improvement.

You might try some glasspacks, sound great without noise-induced hearing loss, or causing the boys in blue to pull out the db meter.

I have Magnaflow Turbos on my Mk2 - stock headers and stock pipes, with the turbos. They are slightly louder than stock at idle though not much, and don’t drone on the highway. But when you get on the gas, they roar. So in a good way, if you drive conservatively they aren’t so obnoxious but can be on demand.

Actually Bruce you can regulate sound output with the throttle opening. Boys in blue = tiptoe.

I have stock exhaust manifolds and down pipes for real or imagined high gas velocity to straight pipes. Out the back are Supertrapp mufflers in place of resonators. I love the sound.
Very un-Concour like in appearance, however.

I am always puzzled when folks put sound systems in E types. No need with a 6-Trapp.
Snap, crackle, and a few pops. 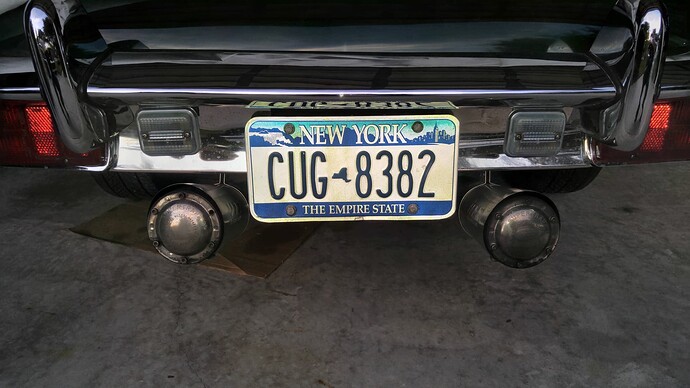 I will be going down a similar ill advised route over the next few weeks. I’m fitting a set of ClassicFabs long tube headers after they get back from JetHot, and thought “while I’m at it” I’ll try a custom X tube (by stainlessheaders.com) in place of my already straight through center mufflers. Surely will be too loud, but hey, why not. Maybe run it a season, maybe a week, we’ll see.

I recently had my resonators off, and decided to start the car running straight out of the (original) mufflers. It sounded awful, and SUPER loud, even at idle.

I put my new resonators on, and it almost sounds like a Rolls-Royce at idle. It’s astonishing how much noise the resonators knock out.

We all got old, remember side pipes under the doors? I would need the bathroom from vibration every 10 minutes or ten blocks which ever comes first!
gtjoey1314

Straight pipes on the street are reserved for Harleys and infantile Mustang drivers- all devices of some unrefinement. Lol

Hey Everyone, sorry, been out driving the car, LOL!

So funny, it’s growing on me. Less so on all but a few (my 2 boys) of anyone else within a 1 mile radius. Possibly 2 miles.

Really undriveable on city streets, happily I’m a mile from what we ex-Brits would call a B-Road, these somewhat upgraded and with large redwoods instead of the potholes and road-killed badgers of those of my childhood Hampshire.

The most recent amusement has been “lifting off” to a giggle-inducing on-demand chorus of pops and crackles. There is a lovely long gentle hill nearby, crackles on pops all the way down, bleeding ears all the way back up.

Video didn’t do it justice. Also thought someone might report me for having my 7 year old revving it…

The idea of an X-Tube is interesting. I have one on the Maz, and stock, too, although I thought the idea was to do something with the offbeat V8 “pulses”.

Not sure what the effect would be on a straight 6?

On some engines an X or H pipe can yield more torque/horsepower. Not what I’m going for here. Based on experience with other engines (BMW twin, Porsche flat 6), I believe I will get a ‘softer’ sound as both of the rear resonators will be active for both groups of 3 cylinders. So a “kinder, gentler” version of way too loud.

Not sure what the effect would be on a straight 6?

Nothing. This was the idea of my siamesed muffler, it didn’t do a thing. The reason is that exhaust pulses on a straight six are evenly spaced. Roger Bywater had said as much on his website, I wish I’d paid attention:

My experience after 30 years of wasting time and money: it’s hard to get a meaningful performance gain from exhaust systems. But sometimes it’s just about making noise. I get that some find 10db to be fungible with 10 hp when it comes to driver satisfaction. If you want to pick up where I left off, I’ll offer one clue: any gains will happen in the first 36 inches after the port. Anything beyond that is just plumbing. The stock 2+2 system, with its siamese pipe is just about ideal, you can build on that as Bywater does with his six cylinder systems (which are similar to an old GTJ design.)

Engine Masters proved this point again last week. They tried their best mandrel bend exhaust pipe against a restrictive pipe, and their favorite glasspak against a more restrictive turbo muffler.Dyno’d all sorts of combinations. And found…nothing. No meaningful differences, no matter how they mixed and matched. And they were running a big V8, which would have a naturally unbalanced flow and huge exhaust volume. Nothing exciting goes on behind the headers.

it’s hard to get a meaningful performance gain from exhaust systems.

Unless coupled with major changes in engine fundamentals, it’s essentially an exercise for the mind dyno.

What a fun day this turned out to be! For me at any rate, less so for the neighbours.

To be clear this was all about giving it a little additional voice, nothing to do with horsepower. My US spec S1.5 with its ridiculous differential ratio gives me all the power I need all the way to 25 mph by which time I’m practically redlining 4th gear, I just think it could sound a little more authoritative in doing so.

Exhausts though are an enigma. I had a Series 1 Range Rover Sport (4.0 S/C) on which I simply removed the front resonator for $100 to glorious effect. Doing the same to its child, the Series 2 (5.0 S/C) produced small arms fire out the back and needed some more, but minor, fettling to achieve the same “ominous brooding” presence. The exact same engine in my current full-size Rover remains whisper quiet whatever is done to it, apparently the secret there is in the catalytic converter. (?)

This is my experience with exhaust.
Changed to a big bore stainless steel header into a big bore pipes and big bore stainless steel double mufflers. Straight big bore tail pipes with no resonators.
( The above big bore system were from one of the usuals)
The car sounded like it came off the track at Watkins Glen.
But it became to much to bear very quickly.
I also felt the car felt sluggish at lower speeds, it was as snappy, probably because there was less back pressure?
So I was looking at Trapp resonators and the way you can control back pressure by adding or removing those plates to increase or decrease the amount of back pressure to suit what u will be using it for.
Instead of purchasing them, I decided to stick back the stock resonators to see if that will sort of do what the Trapps do.
I was very happy with the results, very happy. It’s got a very nice sound. And my Butt Dyno felt the difference.
Remember , a gas engine is just a air pump.
You can also tune the intake and exhaust to find your sweet spot
It’s half the fun.
Also, for anyone who is questioning the above, I want you to know that my Butt Dyno , is very very accurate. At least in my head it is, both are interchangeable.

Maybe get yourself one of those Series 3 tips with the 4 outlets and a couple of the electrically controlled exhaust gates. Have two of the tips routed thru the resonators when you want quiet and two bypass them when you want the noise. A guy I know did this type of thing on his Cosworth Vega with a straight pipe out one side of the car for track days and the other with the muffler etc. in the normal location. Just thinking out loud since I have no idea if this would really be practical on an E. I put a low restriction muffler on my Cosworth Vega and it was fun at first but soon became tiresome. I had to add a resonator a couple of months later to maintain sanity.

Most of whom drive Teslas.

That alone would be worth a small loss of hearing…