I have just replaced my B type head with a straight port head on my 3.4.
I am trying to find what the difference in performance between a Straight port head verses a regular B head is.
I have 8:1 comp with plus 30 on the bores, I probably will have to change my timing from 6 to 9deg.
Engine will not be installed until next year, so I am wondering if any of our members has done this before.

Kevin
Thanks mate, lots of info there to mull over.
Without a before and after on a dyno its impossible to gauge.
At this time l have a 4.2 with twin HD8, alloy Fly/whl. With big bore exh man.
My original 3.4 will get installed next year with the Twin HD8’s, alloy Fly. And stage 1 cams, and big bore exh, also a polished inlet man.
So l am hoping all that should be about equal to a 3.8 S motor.
Time will tell, but the 4.2 is a beauty of a powerhouse.
Much appreciate your knowledge.
Morris

It will be interesting to see how the 3.4 compares to the 4.2. Sounds like a nice project. Good luck.

I would spend the cash on a 3.54-1 LSD , that gives the old girl far longer legs in every gear !
On saying that , im a boob man

Without a before and after on a dyno its impossible to gauge.

Do as Hammill suggests and perform a simple stopwatch over known distance test, before and after modifications

Ian
Car has a 3.54 with a 5 speed, 3.4 is original engine and fully rebuilt, eventually has to go back in for resale value to keep as matching numbers.
Thanks for your notes. boobs eh !

Well I would tend to disagree , as the 3.54 and 5 speed are not standard , having engine in the car would make no diffrence , the 4.2 and the rest of the running gear is a great power increase , if you sold car , and the engine was on a pallet , no value would be lost , not forgetting the 3.4 engine is not standard now , with the s/p head .
Cars are only original once , as they left the factory !

I get your point Ian.

Do the stop watch tests, four times, in each direction, to determine performance more accurately.

I replaced my engine with a XJ6 one , made it look like a 340 , only giveaway is the HS8 Carbs , kept the old engine for Originality 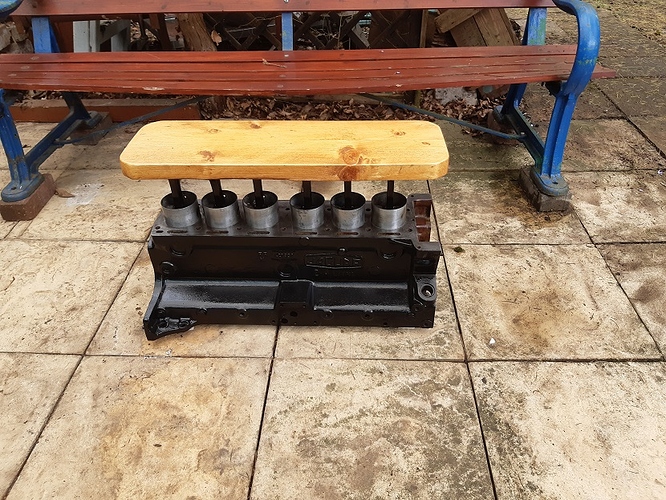 Don’t think that a pine crankshaft was ever specified.

That’s not a Crank , was going to make Cylinder head Gasket

Eves says 2.4 if you zoom in far enough