I have a strange problem with a XK140 OTS, (original fourspeed, no OD).
The clutch is a Borg & Beck, I installed it all new two years ago and was working perfect until now.

I suspected a half broken tapered pin or a crack in the clutch fork, so I removed the gearbox, but found these ok.
I removed the whole clutch, still looked like new.

Hope i made myself understood.

Thanks in advance
George 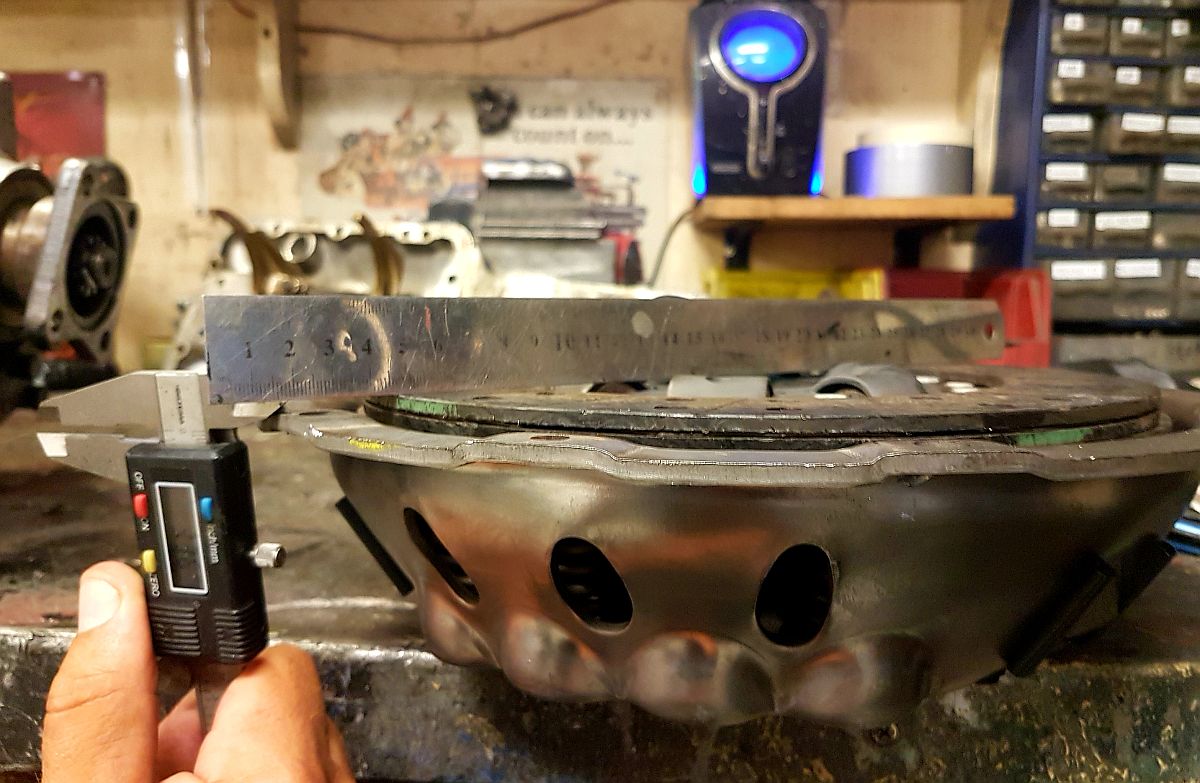 Plenty of grease in your crankshaft pilot bushing?
No rust between clutch disk and flywheel or pressure plate?
Slave cylinder bracket flexing too much?
Has clutch effort stayed the same or feel soft?

Broken or sheared taper pin is usually the prime suspect, but you say you checked that as ok.
How is the carbon release bearing?
You might check the parallelism of the pressure plate center ring with the outer bolt pattern.
See if there is about equal effort to compress the 3 arms or levers.
Put the clutch disc on the trans shaft, turn it and see if there is much runout, non-parallelism.

Thanks for the input.
(The release bearing is almost new also.)
As you say, and I cant find anything else, I suspect the pressure plate.
I have adjusted the three arms for parallelism and the clutch disc is now sticking out 3,6mm at all 6 bolt holes where I measured in the photo.

I guess I have to get the gearbox back in the car to test if this was the problem, puh…
I will report back next week.

The car is now up running again and the clutch feels perfect. The reason must have been one of the three arms that holds the pressure plate. These arms are adjusted from factory and the nuts then locked. I guess one of the lock nuts failed to do its work.

Looking at the pressure plate, one can see its a little burned at one side. 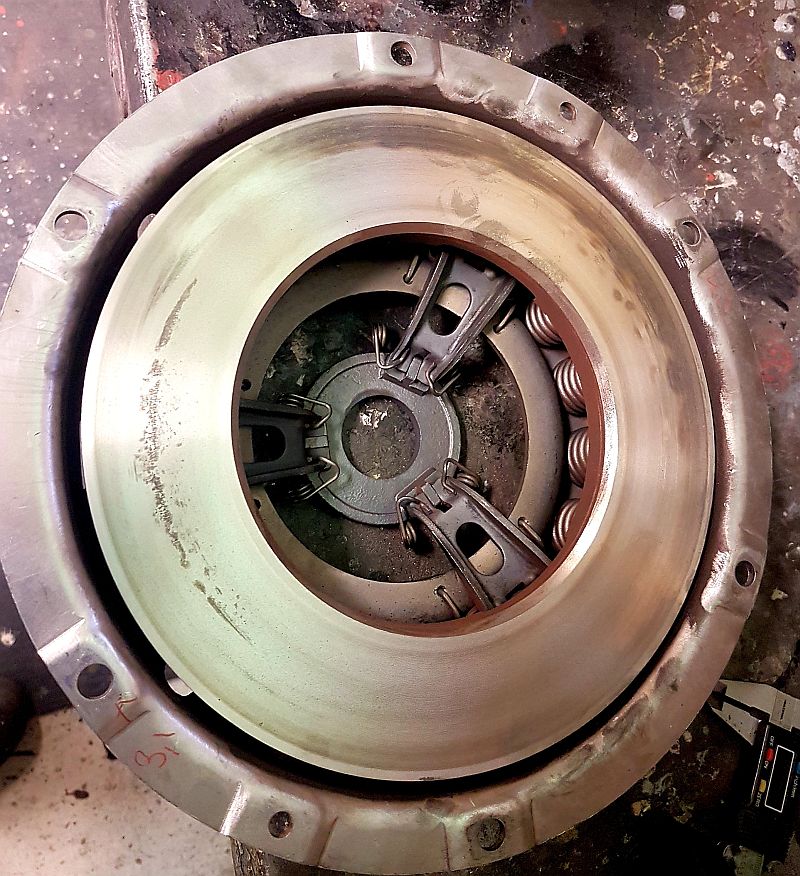 A small adjustment for mankind, but a hell of a job for a man…

I wish for you… to never have to do that miserable job, again!!!

I’m having the same problem with my 65 e-type. The master and slave are new and it has been bleed so many times I’m running out of new fluid. The clutch will not disengage. Anyone with an e-type seen this problem? The clutch assembly has less than 5,000 miles on it.

BTW what is a taper pin? 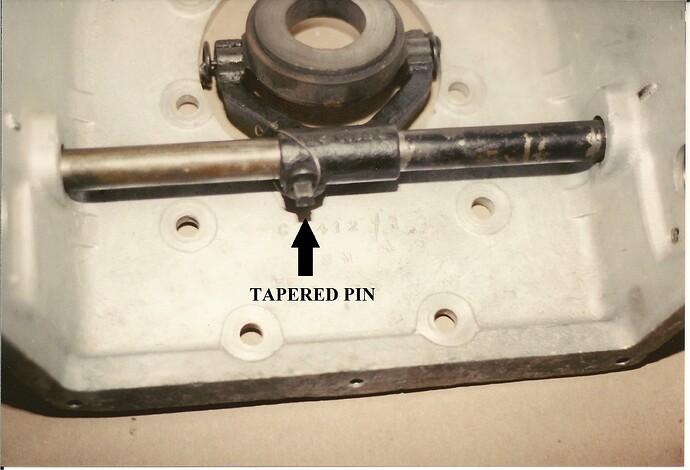 But your throw-out bearing can go bad.
Bob, check the operation of the lever on the bell housing when you step on the pedal; if it moves 1/2", your problem is inside, probably the throw-out bearing.
PDX_Bob1 (PDX Bob) December 20, 2020, 7:09pm #12

I’ll try and inspect it from the hole in the bell housing. A cursory look didn’t show anything obvious but the t/o bearing may be wearing unevenly. I ordered a boroscope for the iPhone from Amazon and it should be in soon. I was thinking I should be able to see an uneven compression of the clutch if this is the problem. Does that makes sense?

Yes, if the throw-out bearing swivels were rusty and stuck, it would push unevenly on the pressure plate, and one of the three levers probably would not release as much as the other two. But since the clutch is usually spinning when you do this, it would be a wobbly release, and probably noisy.

I went out at half time and did a simple experiment. I took off the return spring and let the slave cylinder push the arm forward until it stopped. A look into the inspect hole showed two things: it is a borg&beck clutch, and the t/o bearing looked to be against the top of the plate but there was a good ¼” gap between them at the bottom. Definitely the cause of my grief. The nut and set screw for that arm on the pressure plate is right at the inspection hole. I wonder…

The throw-out bearing 13 is supposed to swivel in the yoke (see 10 above). 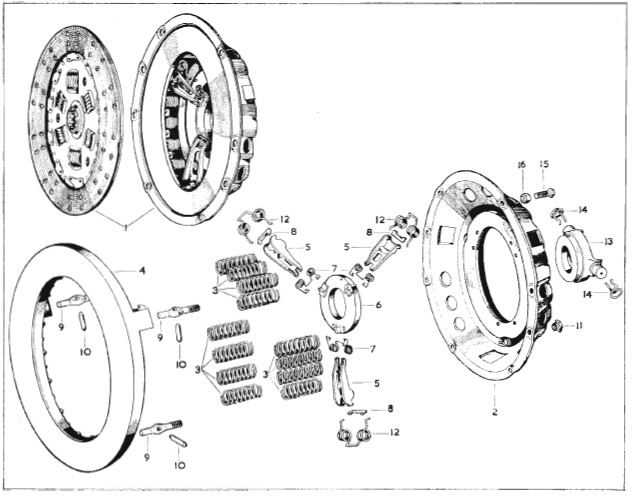 If you mean the nut and stud 9 on the arm 5, don’t mess with those nuts.
Is the ring 6 flat straight or out of kilter?

It appears that the ring, 6, is not parallel to the t/o bearing, which appears to be resting against the top part of the ring, but not the bottom. Once I get the endoscope I can see what happens when the clutch is fully depressed. I believe the guy who started this thread adjust the screws to bring the arms into alignment.

BTW, where did you get the exploded view of the clutch assembly?

I went back and re-read the whole thread, and yes you’re right, adjusting the 3 nuts is a very unusual thing to do, as they are supposed to be adjusted and locked by the manufacturer.
If you have a remote starter switch, you could try cranking the engine and see if that ring 6 turns straight, or does it wobble as it turns?
I thought you said you had an E-Type, so I selected and copied pages out of the 3.8 E-Type parts catalogue.

Well, yesterday I verified that the problem is the pressure plate. I tried to take a video but the scope I got was crap. Anyway, with t/o bearing pushed against the ring there is a definite tilt. When I ran the starter the ring wobbled around, one of the clutch arms, #5, is a good ¼” lower than the other two. The set screw for it looks okay from the top side but it’s all got to come out anyway. I’ll follow up once the engine and gearbox is out and separated.

Anyway, with t/o bearing pushed against the ring there is a definite tilt.

Yep… that’s a sign of a collapsed pressure plate. Bummer.