I finally got my car running but haven’t driven it yet. The car starts from cold with full choke - I don’t touch the gas pedal. It does seem to crank a bit too long but I’m so used to modern cars that I’m probably not a good judge. The idle is smooth, no smoking, etc.

Even after I’ve let the car warm up to the normal range, I can’t push in the choke without the engine stopping. The most I can push the choke in is about a 1/4". If I go beyond that, the engine stops very quickly. It stops so quickly that once the revs start to drop, you can’t pull the choke back out quick enough to save it. I also noticed that the when I block air flow to either carb, the revs pick up. It seems like the mixture is way off - too lean?

I had the carbs rebuilt at a shop but they claimed they couldn’t set them because they couldn’t warm the car up when they had it. Fuel pump and fuel tank are also new. The pumps ticks a bit when I switch on the ignition and then stops so I’m guessing fuel flow to the carbs is not the problem.

Is there some initial starting point for carbs to be able to at least push the choke all the way in? I’m really hoping this isn’t a sign of a shoddy rebuild.

At least I’ve discovered that my electric fans come on automatically as they should. They also come on when I turn on the A/C. Even the extra dash mounted fan switch works. I’m using the old radiator and fans for now. If they go toes up, I’ll be buying the coolcat radiator and fans.

Check to ensure there isn’t a blockage of some sort in the main jet tubes.

What is the state of the secondary manifold throttles on your Stromberg setup? Have the plates been removed or shafts removed or stock setup? Your symptoms could be due to a large vacuum leak allowing a lot of unmetered air into the engine. On a Stromberg setup, the first place I’d look is at the secondary manifold area. I had the symptoms you describe when a backfire through the carbs blew out one of the plugs I’d used when I removed the secondary throttle shafts introducing a large air leak downstream of the carbs.

Dave - as far as I know it’s completely stock. The car sat from 1985 until I bought earlier this year. I used to adjust the Strombergs on my TR6 almost 40 years ago through the dashpot. I even made up a tool for it. I don’t think the Jag has the adjustable mixture setup like the TR6.

I’ve already looked for leaks but I’ll check again. I’ve got the vacuum line that goes to the air cleaner blocked for now.

I don’t think the Jag has the adjustable mixture setup like the TR6.

Correct - the Strombergs fitted to the 69s had no means of mixture adjustment other than setting the float height.

I’ve got the vacuum line that goes to the air cleaner blocked for now.

Do you mean the engine breather line from the front of the engine to the air cleaner? Blocking that won’t affect the mixture as it’s upstream of the carbs, but may cause pressure to build up in the crankcase which is not a good idea (assuming that you’ve blocked the breather end)

No, there’s a small vacuum line that goes to some type of vacuum operated valve in the air cleaner. I guess is that is switches air intake from the exhaust manifold to the front of the air filter housing. My car is a 1970 with the rectangular air cleaner. It comes off the back of the manifold next to the 11/32" vacuum hose that connect to the vacuum bottle on the right side of the engine compartment.

Can you provide pics of your setup? The carbs are quite simple in design and operation and to be honest most of the time their lack of performance is likely due to being without use for very extended periods of time. Other than floats and fuel levels and the diaphragm as far as the carbs themselves are concerned, not much else.

I like the idea of a possible choke setup problem. Vacuum leaks are always a problem and just about any fuel delivery device on any car ever made it seems, so it’s always a good idea to check for that…if it’s a big leak you might hear it if you listen carefully.

Pics would be good.

No, there’s a small vacuum line that goes to some type of vacuum operated valve in the air cleaner.

OK - I understand. I can’t see disconnecting that line will have any impact on this issue as long as you’ve plugged it.

That’s why I’m thinking it’s the mixture is way too lean.

I had the carbs rebuilt at a shop but they claimed they couldn’t set them because they couldn’t warm the car up when they had it.

Yes David you are correct about idle increasing when the choke is pulled, but if there’s no idle stop set in the first place with the choke off, couldn’t that be the culprit? Seems to me he should eliminate the simple stuff first and then move on with more complicated diagnostics like blockages, mixtures, secondaries, etc.

David do you know where your Throttle Stop screws are on your ZS carbs? Can you identify them?
Anthony

Yes, I turned them in quite a bit and that let me go from not being able to move the choke in at all to being able to move it in about a 1/4". Maybe I need to do a bit more there. I wish I’d remembered to get some photos. I don’t keep the car at my home.

Good point about starting with the easy stuff first. 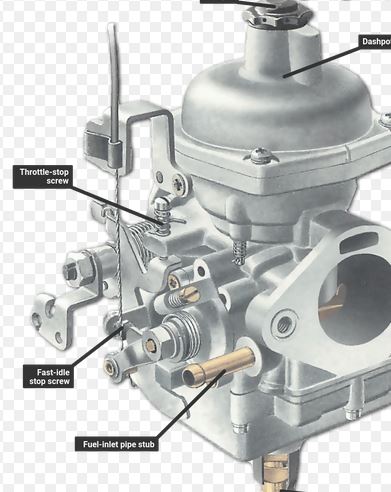 David I attached an image of a generic ZS carb. Notice the vertically mounted screw with a spring around it labeled “Throttle-stop screw.” Each carb has one. They hold the butterflies open just enough to allow your engine to idle with the choke OFF. If you back out those screws too far, your engine will NOT idle. Below that is another screw labeled “Fast-idle stop screw.” Each carb has one. They hold the butterflies open a bit more when you pull the choke out all the way. This give you a faster idle setting when the choke is ON. If you’re not familiar with how these work, have someone operate the choke inside the car while you observe the carbs on the engine. I suspect you’ll figure it out in short order. Let us know.
Anthony

Thanks Anthony. The “throttle stop screws” were the ones I moved in a bit.
Dave

OK, did you try moving them in enough to just move the brackets about 1/32" to 1/16" they are pushing on? Moving those brackets will crack open the throttle butterflies and allow the engine to idle with NO choke. You should do both about the same as a starting point. Then start your engine with choke, when it warms up a bit, see if it will idle after you turn the choke OFF. Remember, you are just looking for a starting point here, the proper setting of these idle stop screws involves balancing the carbs at idle so each carb is providing an equal amount of air / fuel mixture when the engine is at operating temperature at the correct engine RPM. Likewise, setting of the Fast-idle stop screws involves using a feeler gauge to measure the distance from the screw end to their actuating brackets. But you should set the main idle throttle stop screws first before you move on to the fast idle screws.
If you get your engine to idle with my “fly by the seat of your pants settings” of the throttle-stop screws, your next problem becomes how to properly “dial it all in” and set it up properly. It’s fully explained in the service manual if you have one. If you don’t, it’s probably a good idea to get your hands on one. Keep us posted.
Good luck
Anthony

Thanks again Anthony. That’s my goal - get them close and then set them up per the manual. I setup my TR6 with Stomberg’s and several MGB’s with SU’s but that was 40 plus years ago.

I’ve got both the Jaguar shop manual and a Haynes manual along with a few PDF’s I’ve downloaded on the Strombergs. I’ve got the unisyn tool too. It came with the car.

I’ve got both the Jaguar shop manual and a Haynes manual along with a few PDF’s I’ve downloaded on the Strombergs. I’ve got the unisyn tool too. It came with the car.

Oh well, you’ve been holding out on us.

Read the section on setting up the fast idle screws with the feeler gauge and you’ll see what I’m talking about. I think there are some useful photos of the setup procedure found in the S2 ZS carb section that may help visualize it. And with the unisyn you can dial it in.
Anthony

Dave;
Your car and mine are the same as far as carbs and air cleaner, mine has an automatic transmission and yours may have a 4 speed. The small hose that goes to the back of the air cleaner from the rear of the intake manifold serves to power the temperature compensator on the inside of the air cleaner. That in turn goes to the vacuum motor at the front of the ‘snorkel’ on the air cleaner to open the snorkel to outside air.
There is also a vacuum source on the front carb that goes to the vacuum retard on the distributor if it is hooked up correctly (unless the car has been converted to vacuum advance).
There is a booklet that explains this nicely that can be bought from JCNA or, I think, Richard Liggett at xkebooks.com.