While reinstalling my SU carbs today, I managed to crack the fuel bowl. There may have been a hairline crack to begin with which would explain the fuel seepage I had prior to the rebuild. In any case, I need part # AUC2009 and wanted to see if anyone had a spare they might be will to sell. 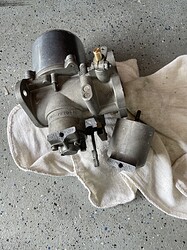 Worse comes to worst, a talented welder can repair that.

I just ordered a new one but while I’m not necessarily talented, I can weld and may give it a go for the experience.

it’s cast aluminum so use care when welding.

I wonder how well these low temperature aluminum welding sticks would work.

The below is just an example.

I tried them: had no success.

I have used them with good results. The aluminum has to be made super clean using a stainless steel brush and then while there’s a molten puddle over the repair area you need to scrape under the puddle with a stainless steel filler rod sharpened at its end like a chisel in order to lift the aluminum oxide that forms instantaneously when heat is applied to achieve a bond. The stuff doesn’t flow like solder so you’d need to notch the break to allow full access to the scraper. Even then, or if you were to weld it back together with TIG, how do you re-drill the fuel channel?

Btw, Bob, the HD8 fuel bowls used in the saloons are the same though their part numbers may differ, particularly the part incorporated with the hisser, which can still be used once the extra hole in the base is plugged.

All done, new fuel bowl showed up this morning. Other than struggling with the braided choke cable, reinstallation went surprisIngly easy. Carb tUning is planned for tomorrow, I decided to end my day on a positive note rather than dig into the next task. 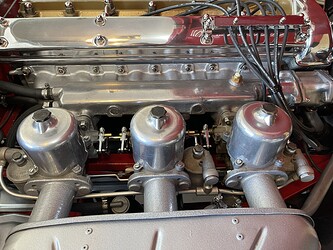 After tuning my plan is to remove the dash pots and polish them on a bench grinder. Any tips?

Just don’t get too much heat into them on the polishing wheel.

Yes: if you cannot handle them barehanded, comfortably, you made them too hot.

I guess I need to understand the first step if the last step is corn starch. Lol

Corn starch removes that black gunk you get with polishing aluminum, and acts as a fine rouge.

So just sprinkle it on and polish?

It’s probably obvious, but don’t mix up any of the parts. The bells and pistons are a matched set.

I take a microfiber towel, doink it into a dish of the corn starch, then rub the part: you WILL BE amazed at the schmutz that comes off.

Start by wet sanding, 600 > 1200 > 2000 > 2500. When you achieve a nice even matte finish with no blemishes hit it with red jewellers rouge on a canton wheel then white rouge on a loose wheel. Hold onto that bell like your life depended on it, because the buffing wheel will grab hold when you least expect it and fling the bell across the room into your toolbox.

across the room into your toolbox.

Here’s what I use for holding onto the bell when polishing. It’s a section of 1/2” threaded rod stock and two nuts. Self explanatory. The masking tape tape keeps the buffing wheels from grabbing. The aluminum duct tape protects the damper tube inside. 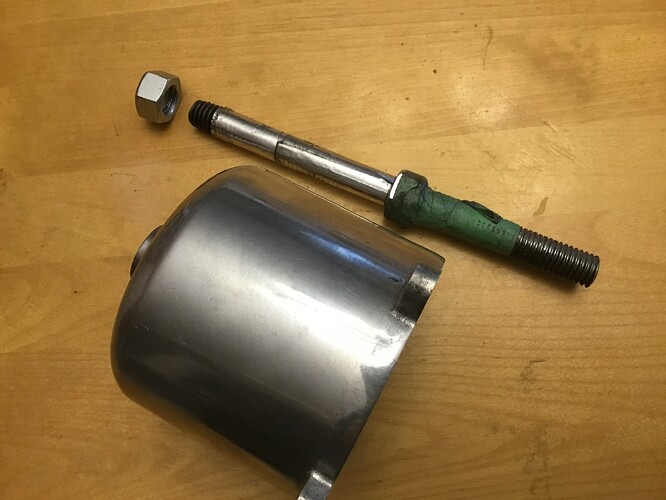 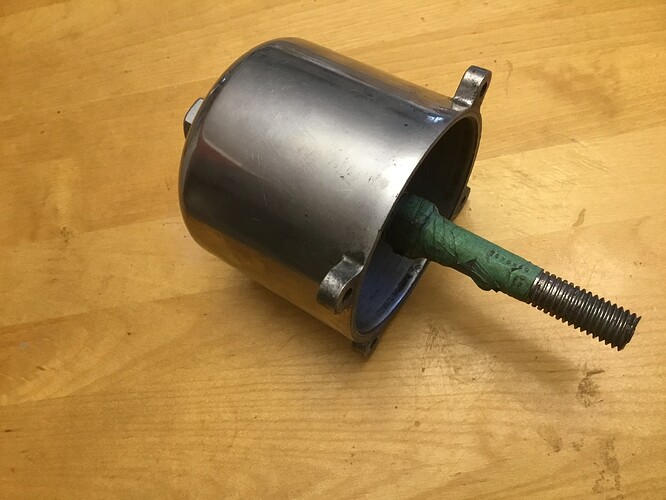 All done, new fuel bowl showed up this morning.

Price and seller please? The TSA snapped the end one of my set by opening the checked bag to inspect (which is fine and makes 3 times out of three sets taken to UK) but they did not repack correctly (not fine). Happened just before covid and after all kinds of hassle they closed the case and surprisingly found themselves innocent and not responsible…

Agree with all Nickolas states. I’ve had a couple of various buffers, dremels with buffing cones and various grit buffing rouges set up to make the process run a little smoother instead or swapping buffing pads throughout the process.

Couple of bits to add. Make sure to use a buffing wheel tool to clean out the wheel from time to time so that the wheel doesn’t become impacted with rouge after awhile. Also, of new to buffing metals be aware that different buffing wheel perform different tasks. By the time you get to your final buff you should be using a loose flap wheel verses a tight woven wheel that you start with.

Additionally, if your new to buffing dashpots and your concerned about warping them due to heat bolt two of them together when buffing and that should help ease any concerns. That being said I will reiterate what has been said to be very careful to not lean into the buffer and heat the part up to the point that you can’t touch it. Let the rouge do the work.