SU carburetor question: I have '61 Mk2 3.4 with HD6 SU carbs. I am trying to follow the initial step of adjusting mixture strength, which requires me to “screw out both mixture screws until the jets are in the highest possible position in their holders” (as per the Maintenance Handbook).

Which of the 2 ‘levers’ actually adjusts the height of the jet port? The one with the screw in it (on top) or the one that the screw pushes against (underneath it)? On my carbs, the former just flops back and forth when the screw is not tight against the other. On the other, it seems fixed solidly in place. In other words, the screw has no effect.

Wondering if I’ve either overtightened something somewhere, or missed something during assembly? 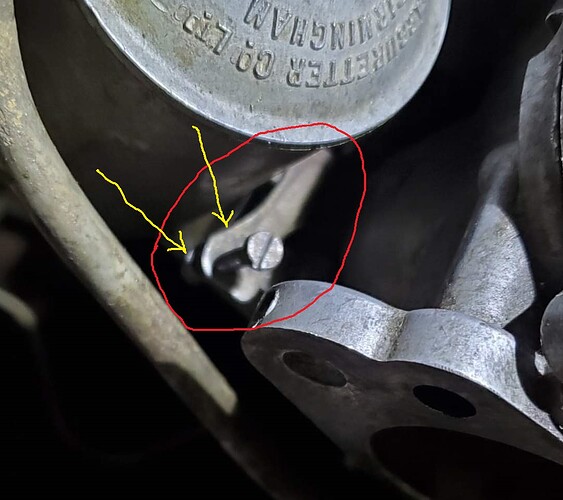 The threaded piece moves, it pivots so if the lever goes up as the screw goes in, the jet drops. The jet is in a rubber diaphragm.
If it’s not moving it makes sense to remove the carbs and carefully look into it. Maybe a diaphragm has ruptured or is hardened, or the pivot seized, or the jet is stuck.

Hi I had the same issue and you’ll find that the jet is stuck in position. On mine the arms where bent (probably by myself trying to adjust the mixture) It looks like the previous owner had not driven it for a reasonable amount of time and the carbs had dried out leaving residue which stuck the jets hard. you could not move them by pushing them so I had to strip them down to release… Hope this helps…

While your’e in there make sure the diaphragms are still supple. They only move/flex when the jets are being adjusted. In my case I believe ethanol in the gas petrified mine. When I went to adjust mine they cracked and I had gas running everywhere.

The above AND there’s a spring underneath the diaphragm… at least there should be - they dissolve!

Thanks for all the replies! Looks like I’ll have to take things apart again :-/

Will post an update, as soon as I find time to get to it.

One quick follow-up question, though: I’ve only recently gotten the engine running, so I’ve never taken the carbs apart with them full of fuel. Any tips on disconnecting without spilling gas over everything?

Open the float bowls and use a turkey baster to suck out the fuel remaining. Any left over will be minimal.

Syringe and spill the rest, exactly. It’s not much and it makes no mess.

Sounds good, gents. Thanks for the tips!