About 5 years back I purchased a new SU square body pump with the electronic conversion replacing the mechanical points. The car has had very limited use since, covering probably less than 2000 miles since 2016.
Yesterday I decided to take a short 40 mile jaunt to a Jaguar restorer’s to give him back a distributor he had loaned me, and to help charge up the batteries. The car went like a bird until I was about 400 yards from his premises on a little country lane, when it just died. It ran very fluffily for a few seconds before it quit, and trying to restart it, it would only run for a few seconds before cutting out. It felt like it had run out of fuel, although the tank was nearly full. We towed it to the shop, and it quickly became apparent that the fuel pump was no longer pumping, although it had power to it - no ticking, nada! Nothing going through to the float bowls at all.
So, I’ve ordered a new pump, but this time with the mechanical points. At least you have a chance of getting that going with a few taps on the pump body - done that plenty of times in the past. With an electronic solid-state version there’s nothing you can do on the roadside if it gives up.
Has anyone experienced such a failure of an electronic SU pump, and I’m wondering if there could be any specific cause…? maybe I’ve just been unlucky. But - I was incredibly lucky it happened where it did, and not on the motorway, especially as I stupidly decided I didn’t need to take my phone with me! Lesson learned, there!!!

Mine had a rusty ground. Might want to check that

Mine had the same symptom, so had to troubleshoot beside the road. I got lucky and fixed it by bending the Hall Effect sensor that picks up the back and forth movement of the pump shaft closer to the shaft. It’s under the black plastic cover, and looks like an older transistor. Has been fine for years since. Dave

Thanks - I’ll pass those comments on.

thumping it might have gotten it to work. (ask me how I know) sometimes the shaft just doesn’t quite return to where it should.

We did thump it quite a bit!

Bad luck. My daughter’s car packed in on a country lane in Chenies last night but she was able to park and wait for a tow. On a main road or a motorway it doesn’t bear thinking about.

My son installed an electronic conversion in my pump and it has worked well. From memory I think he had to “adjust” it until he achieved the correct flow. I wonder if your pump lost its ‘adjustment’?

Mechanical or electronic? That could apply equally to distributors. Convert and risk coming to a dead stop on a malfunction or stick with the mechanical and have some sort of chance of continuing?

I’m wondering if there could be any specific cause…?

Seven years ago I bought an electronic replacement SU fuel pump for my E because I thought it would be more reliable, though I had had no problems with the 46-year-old original. It stopped working after maybe an hour of operation. Took it out and applied power to the leads. Nothing. Disconnected and reconnected a lead and it went “thunk”. Repeat. “thunk, thunk”. Third time it operated normally. No clue why. I cleaned up the points in the original, put in a new diaphragm and reinstalled it and it’s been working fine for over 10,000 miles. I’ve kept the electronic unit as a spare, but I don’t have a whole lot of confidence in it.

Well this makes for a disappointing read. I just discarded an old, aftermarket Bendix/ Facet unit in favor of a new, positive ground, original square-bodied SU type with the solid state points upgrade. They’re not cheap and my expectation is that this thing should work without any further tweaking right out of the box for many years to come before any sort of failure. Are these even bench tested/ adjusted before leaving the factory? God knows we endure enough of the old jokes about the electrics on these cars so I don’t want it dying in the middle of an intersection heaped on me as well.

Advance auto and others carry fuel pumps that are dual lead and offer the ability to use on either a pos ground or negative ground setup. Until last year I carried one as a spare because they are easy to install and pump at 3 to 5 lbs pressure. It is now in a roller that had both pumps fail at a show I attended. The early Rolls had the same pumps as my 140 jag. His had been converted to neg ground. When I got back home I converted them to pos grd by changing the resistor when I fixed them. It was worth the $12.00 I spent on the spare.

At the risk of jinxing myself and in an attempt to make you feel better, I installed a positive ground, S.U. solid state pump from one of the principal suppliers in 2009. At that time, given the exchange rate and tax/duty assessed by our customs and excise overlords, it cost me some $266. Cdn. The good news is it has propelled the XK for 32,000 miles (which means it will probably let go tomorrow!).

as to the first question…has this happened…yes, I have seen several comments from others on a solid state fail: as said the SU can have sticky valves and fail to pum as well, pick your poison, but, thus Charles’ advice to carry the heavy shop manual for the purpose of beating on the pump body. Sticky valves are the usual issue. A small Facet or similar pump (3-4psi) can be carried as a spare on excursions, do set it up, even with a mounting spot, so that it can be easily connected without removal of the SU…some standard auto parts flex “rubber” fuel lines will get you home…(pay attention to ground, and disconnect the battery when fiddling with electric connections. Fuel will be present. Nick

I’ll investigate the pump once it’s off and I’ve got it home, and with luck, find a cause for the failure. It may be something quite simple like a sticky valve - we shall see!

Chris, out of curiousity do you keep a spare pump in your car or garage?

Nick, this reader will take your advice by keeping a spare pump on hand. After re-reading this thread earlier, I saw someone selling a Bendix/ Facet 12 volt positive ground fuel pump on Ebay with a reasonable buy-it-now, so I pulled the trigger. I haven’t seen a 12 volt positive ground one come up for sale in a long time. My other Bendix is a 6 volt negative ground type but interestingly, worked on my 12 volt car – when it was still configured for negative ground. I like the Bendix/ Facet pumps as they’re so ridiculously simple inside with almost nothing to wear out. I took mine apart once and found it to be no more than essentially an electrical solenoid with its cylindrical core working as a piston, a round nylon ball as a check valve and a filter. That’s it. No rubber diaphragms, points, etc. The downside is that they’re not original to our cars and from what I’ve read, pressure output is slightly higher and they don’t cycle on/off like the originals. These later points won’t matter to me though if I find myself on the side of the road due to failure of the original. For now I’ll keep the new Bendix purchase as a spare and see how well the original-type SU performs over time per comments from Chris and any others.

Christopher…as long as the pressure does not exceed about 4psi…, not sure about the continuous running feature…if it overcomes the small float shut off…it could run fuel out the overflow pipes…you don’t want that !..but say it works or similar…I like the idea, which I have not done yet on my own, to affix the pump next to the existing one…at the ready…it could even be pre wired with a switch, and connected to fuel with a gated Y. Talk about being ready ! I have seen engine bays with 6 pre-gapped spare spark plugs in a mount. Nick

Chris, out of curiousity do you keep a spare pump in your car or garage?

No, but I soon will… Ha, ha! I see Coventry Auto Components lists a get-you-home Facet-type pump kit with associated hoses, which can be velcro’d to the original pump and hooked up in an emergency.

I have the original SU pump with the older version of the electronic conversion, which uses a transistor operated by the points, which in turn operates the pumping coil. 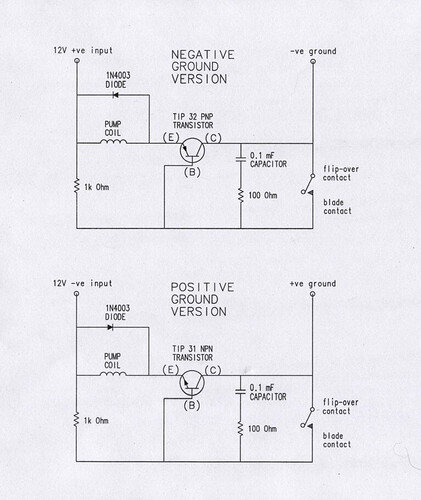 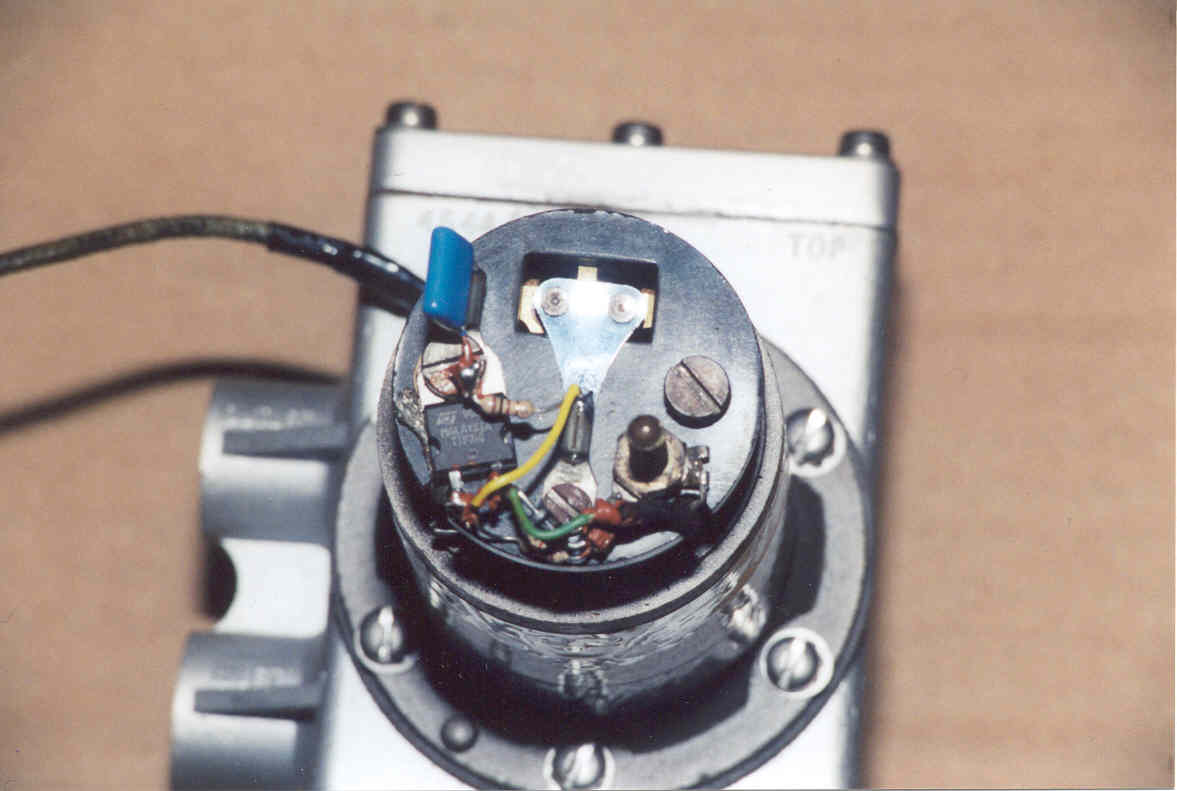 Chris L, we will be interested to hear what you find with your Hall Effect version, why it failed. All SU knowledge is good.

No, I don’t have either a spare on the car or in the garage, but then I like to live dangerously!

A lessons-learned story. Many years (45 years!) ago I had an XK150 that the previous owner had mounted a second, pass thru, fuel pump on the frame near the original. I was troubleshooting and hooked the hot wire to the bypassed original pump. The pump started, squirted fuel all over my arm, and sparked/ignited my arm. No fun. Luckily I was in the military at Fort Huachuca Arizona and they knew all about burn injuries. But it’s no fun. So…be thoughtful when working on fuel and electrics together.
Good luck! Dave