I have a 1969 FHC e-type with the Dual Stromberg carburetor setup. One day, I’d like to convert the the triple SU. There are some complete sets available but I just can’t afford them right now.

What I’d love to do is pick up an “orphan” that is complete but maybe needs a little love. Its appealing to me to try to polish it up and learn to rebuild it. I’m not particularly mechanical so it would really be a learning activity for me.

Anyone got one for sale? I searched the forum to see if there was a “parts wanted” section and couldn’t find…forgive me if I’m posting in the wrong place. Thanks!

Sorry, no parts available from me, but the usuals sell a lot of that stuff. If you do it, don’t forget to change the distributor advance curves as well, or you will not benefit that much, at least not in power.

A lot of it requires more advance in timing. Always best to do the final adjustments in a dyno to see how the power comes and what the mixture is at a given rpm.

Hi JRudd, I converted my 71 Ser 2 (4.2 engine) to SU’s about 25 years ago… no regrets. Even then it was expensive but not like now, which is astronomical. My solution was to sniff about and see what I could come up with. My first acquisition was the water rail and triple intake from an early car with a 3.8 engine, plus linkage.

Carbs?.. The SU HD8 was used on several British makes, Austin Healey, Austin A 105, Rover, etc. In my case, I bought two sets for a Rover TC 2000 ( TC = Twin Carb), picked the best 3, cleaned, polished and rebuilt them. The rest they say is history and the car runs very well.
My recommendation is to expand your search as noted above. Of note, the Jaguar Mk 10 had triple SU’s also but they are different, (electric chokes) and the manifold design will not fit an Etype as it fouls the bonnet.

If you want pics, you can contact me at brianr._mellis@telus.net, as I have no luck posting them. If anyone wants to see the set up I will be glad to share with the everyone on the forum as they might know how to post them for me. best regards with your project, Brian/ Mytype

contact me at brianr._mellis@telus.net, as I have no luck posting them.

You can just drag and drop the pictures onto a post you are creating. If you are using a smart phone, there is a way but I don’t know it.

Morning Jerry, regrettably I am old tech and the smart phone is evidently smarter than I am. Being a confirmed luddite… phones are for phoning, computers are for computing and never the twain shall meet. But email me at my address and I will forward some nice photos to you and you can spread them to the members.

phones are for phoning, computers are for computing

Perfect! Easy on your computer, just drag and drop the file. Give it a try. You have to get the file folder visible that has the file, then just drag it in. Or, just bring up the photo, then close it, and drag from the “Quick Access” folder. If you have Windows 10. If not, just go to the folder.

Glad you got everything together and shiny. MIK too, just won second place at Hillsborough.

Rovers had HD8s…let me see if I have any spares on my parts cars.

There’s a WANTED section in the Classified Ads page accessible at the top of the web page.

They also had the same charging system, same brakes and window winders as Series Two cars…

Not quite the same brakes, certainly no P6 after 65. Before that, the rear brakes were identical.

Perhaps on the P5: its been long enough, I dont recall them that well!
I was referencing the P5, and to the OP, I do not have any spare carbs.

I have an orphan HD8 in my garage that you can have. I’m in Scotland though. I can dig it out and give your more info if you want with a picture.

Wow. That is great, made my day. I’m definitely interested. Let me know what you’d like for it and I’d love a picture. Name is Jason but you can call me anything

Sorry about the wrong name. I saw a ‘Jerry’ mentioned and assumed that was your name.

The carb is a manual choke one, the float cover and bolt is missing, there is only one screw holding the piston cover on (3 missing), the needle is a UR so it is wrong for an E-type. Price… make me an offer. I have a PayPal account.

Shipping to the States by UPS varies from £27 Express Saver with £50 protection to £30 for Express with £50 cover.

Art - no worries about the name

Can you post a picture? So with a
float cover and the right needle it would be appropriate for an e-type?
I’m a total novice so need to look up how big a deal it is to get a float
cover, needles I know are easy to come by in rebuild kits.

I also failed to mention that there might be a bit missing from the main body at the manifold flange. There’s three holes there that look like something should be there. 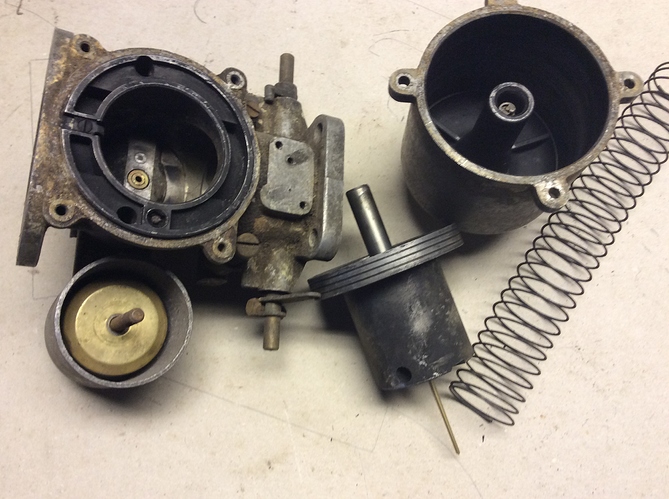 Thanks again - can I get some other photos, A friend who is advising me
would like to see the jet housing and the throttle stop onshaft

Are these the bits you want to see? 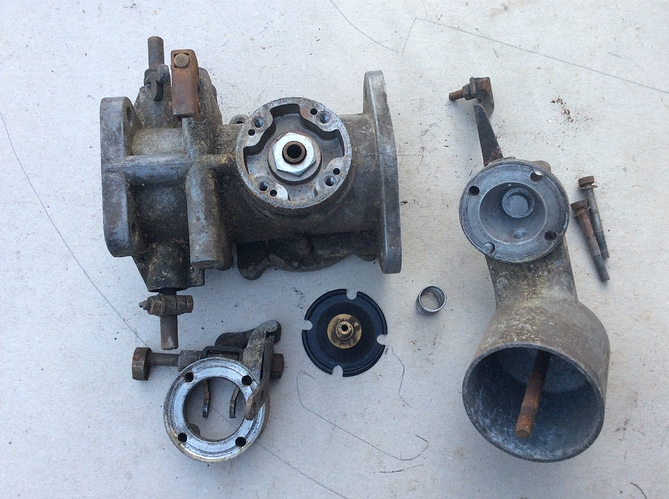 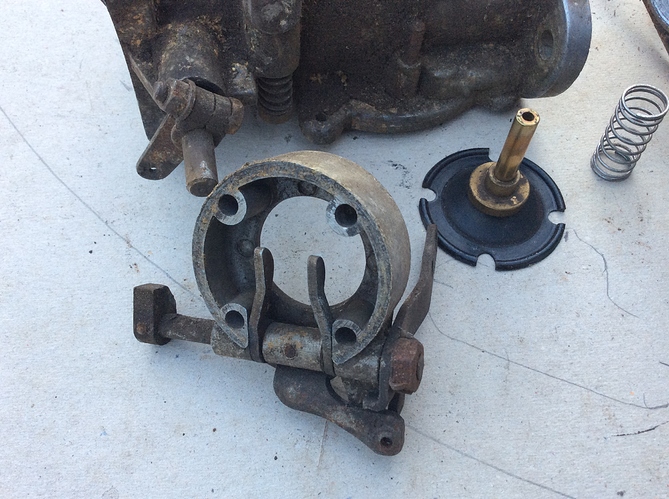 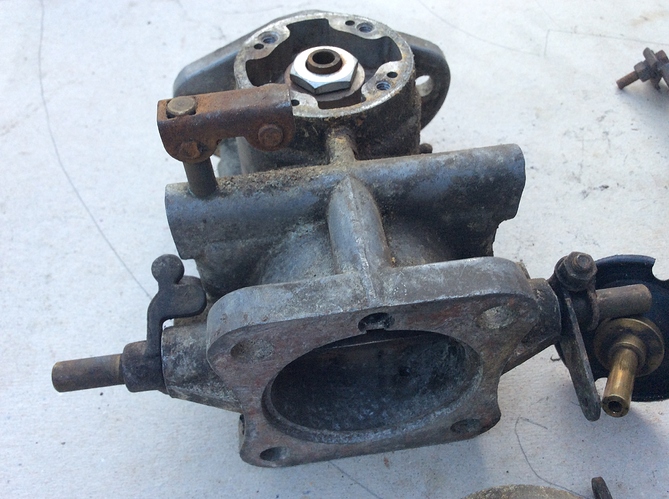 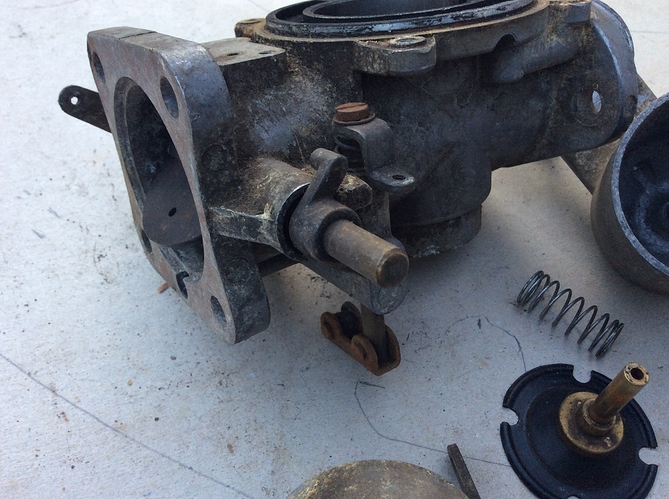 There’s three holes there that look like something should be there.

Those 3 holes are for a vacuum take-off. 2 are threaded, and one is bored into the main bore of the carb. There are both blanking plates, and vac takeoff plates (Burlen probably sells them). If you don’t want the takeoff, then just make a blanking plate out of 1/8" Al stock and make a gasket.

It’s the choke rings that are hard to come by, and the short bells/pistons.

Float chambers and lids are all the same thermo carb (hisser) float chambers have a hole in the bottom, but they are the same casting (and you can plug the hole if you don’t have a hisser).