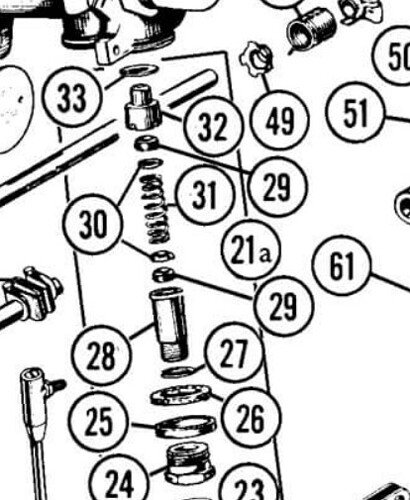 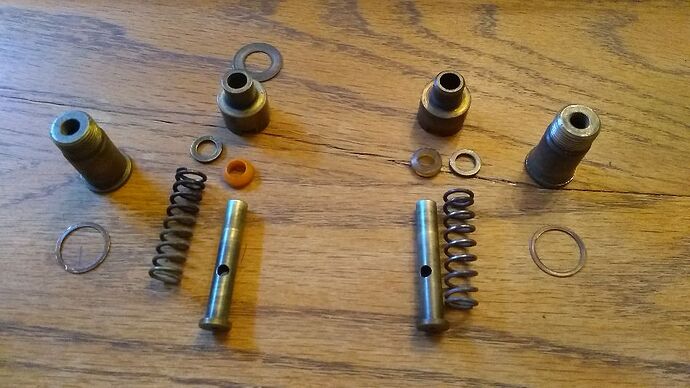 Anyone have any comments?

Another odd thing, the banjo bolts holding the float bowls to the main bodies are a kind of cup shape. They need two fiber washers and a copper washer in between. I’ve only seen flat contact faces. Any comments? 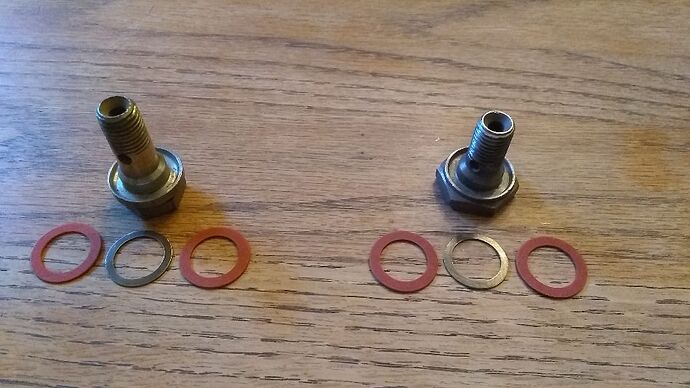 The lip on the contact faces could a.) increase pressure at sealing radius to reduce chance of leakage, b.) help align a washer assembly that is deeper than the lip? These are only guesses.

Attached is a pdf of H4 which shows the triple washer usage but does not give any lip. I don’t find any H3 details in my files.

The trouble is being published in 1952, it shows the spare parts detail/status as of 1952, and unfortunately my holdings of eralier SU spares listing pre these 1952 NEL.191 series is patchy, and indeed I don’t have anything for SS Jaguar (if indeed anything specific exists).

If you look at the note below the Specifications Table, your question is explained… "The original type of Holding Up Bolt (Part No.1541) has a large head .92in across flats, and can only be used with a cork sealing washer (Part No.1542) which fits into a recess in the head. Holding Up bolt (part no. 1541/3) with head .71in across flats is used in conjunction with a single washer (Part no 4642) or the later assembly of three special washers… (note the W prefix to 1541/3 denoted being Walterized - a proprietary form of chemical black-oxidising, which may or may not have been also used pre-1952))

So my reading of all of this is your two holding up bolts with recess machined in head was intended for using just the single cork washer each - the recess contains the cork from speading when tightened, allowing the cork surfcae to seal, and no other washers whether fibre, copper or aluminium. The fibre/copper/aluminium washers were only used with holding up bolts that had no recess/flat surfcae - as used in all later SUs. Clearly SU had an ongoing sealing problem with these holding up bolts, and the Spares Catalogues do reveal three different arrangements…

And a PS. One of the major problems with Burlen’s replacement parts - they only reproduce the latest SU parts and not superseded parts, so you cannot buy new Holding Up bolts with the recessed head - but only later flat head reproductions… I had this problem when restoring a pair of original C-type H8 carburetters, one holding up bolt (second type) was sheared off, the other intact but twisted. Couldn’t buy correct replacements so got a local machinist to make up two from scratch, copying exactly my twisted original - without the twist…

Thanks Roger & Roger. I already had the H4 pdf, which I presume I got from one of you.
If there is an H3 sheet I would like to see it, though perhaps it won’t be very much different.
I sort of suspected the bolt design was intended for a thick cork washer, thanks for the confirmation.
These of mine have apparently had an update in the past.
I see that Moss even offers the set of 3 washers under MGTC parts, 370-700.

Now what about the 29 cork gland seal on the jet shaft fitting into the 32 jet bearing?
Some time in the distant past mine have been replaced by plastic, and one is cracked.
Is cork still good?

If there is an H3 sheet I would like to see it, though perhaps it won’t be very much different. 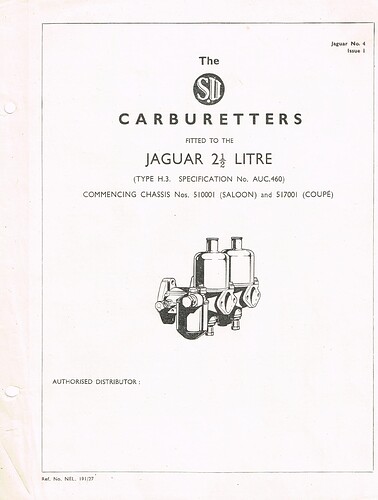 You will note that this is Publication NEL.191/27 again undated, but the NEL prefix denotes Nuffield Exports Limited, part of the then Morris Motors Group, that The S.U. Carburetter Co.Ltd. was then also a separate company within the overall Nuffield Organization/Empire (also including Morris, MG, Riley and Wolseley - thus also all users of SU carburetters). But in 1952 the British Motor Corporation (BMC) was formed which included the Nuffield empire including the renamed SU Carburetters Ltd. The SU business was then put in a 2-3 year transitional period regarding both documentation and production, with all the old SU part Numbers (all numeric) and all the old NEL document numbers moving over to a new AUC part number system (with an AUC prefix) based on the existing Austin Co documentation, also part of the new BMC (AUC = AUstin Carburetter).
So you will note that this attached NEL.191/27 (document numbered) spare parts listing describes Specification No AUC.460, and in the detailed parts listing you will find it shows a mixture of the original all numeric SU part numbers, and the newly revised AUC prefix part numbers…
I have well over 100 different SU Spare Parts Listings (Jaguar, Morris, Austin, Rover etc etc) and have developed some understanding of this 1952 to circa 1954 transition period superseding all SU part numbers to BMC part numbers (in both parts and documentation) thus can confidently date these Spare Parts Listings with the NEL.191/xx prefix as all being 1952, noting the detail of part number changes suggest these NEL.191/xx publications were issued generally over the 12 month period (Maybe a little longer) and not necessarily in NEL number sequence order - for instance NEL.191/52 (for 3-1/2 litre) appears to predate NEL.191/27 (for 2-1/2 litre). But you can work out the old SU and new BMC part numbering logic, with many old all numeric SU part numbers simply updated by adding an AUC prefix (as each individual Part No drawing was revised), with other SU part numbers with a suffix number (eg 1541/3) getting an AUC prefix and same/similar numbers with no suffix). But understanding this does allow you to see if later issues of same publication show simply an updating of SU to BMC part numbers (and no change to the identical part) or whether there has actually been a revision/change made to the actual part(s)…
You will note that as a separate initiative in the top-right corner you see another numbering system - in this case JAGUAR No.4 ISSUE 1. The Jaguar No.4 denotes being the fourth specific Jaguar Carburetter Specification detailed, and the ISSUE 1 denotes being the first issue of that particular Specification. JAGUAR No.4 ISSUE 2 was a later publication and thus further updated to BMC part numbers (and any changes to parts) and indeed no longer has a NEL publication number, but is now BMC Publication Number AUC9526 (note four digit in 95xx series).
JAGUAR No.5 publication (NEL.191/28) also for 2-1/2 litre Mark IV H3 carburetters, but now to the later Specification No. AUC.522 (note three digit) that was introduced from Chassis No. 511620 (Saloon).
Anyway, as you suspected, your Holding Up bolt and cork washer or later modified flat fibre/aluminium washers issue is exactly the same for both 2-1/2 litre (H3) and 3-1/2-litre (H4) carburetters with the note sited previously suggesting (to me) that all Mark IV H3 and H4 carburetters originally had the recessed Holding Up bolts and cork washer, but if you wanted to overhaul your H3/H4 with new parts sometime (unknown) post 1948 before 1952 you would be able to buy the ‘improved’ flat holding up bolts and flat fibre/aluminium washers…, but good to know that Moss at least still supply new replacement cork washers for those not wanting to modify their H3/H4s…