My tech and I fired up Superblack earlier this evening, to test things out before letting her cool down again and FINALLY install the new banjo bolt and burp bolt washer, purchased earlier from John John. For the first time ever, though, we noticed after she had started that she was emitting a bit of "fog "from both exhaust pipes. It was not blue or black, and didn’t appear to be coolant as it had no odor of it or “oily” feel when a hand was stuck into it and nothing was actually dripping from the pipes.

From all appearances and smell, it seemed to be condensation. However, the outside temp was hovering at almost 70 degrees, so it didn’t seem to be the condensation one would expect on a “cold day”. As she had before, she also seemed to be taking her time to warm up – after about 5+ minutes of fast idling her temp gauge was only in the middle of the “blue” zone. So, possibly that was in fact normal condensation we were seeing until she finally gets fully warmed up?

One thing is I had dumped about 1/2 a bottle of “Sta-bil” fuel stabilizer and fuel system cleaner (also helps to break down Ethanol deposits, IIRC) in her a couple of weeks earlier when I topped her tank off (the last 5 gallons or so) with premium fuel. Could that also account for her performance today?

I’m a bit concerned also as to whether Superblack is taking longer than she should to warm up, and had posted about that concern before. How long at idle should a 5.3 facelift take to fully warm up? My tech did notice that the metal water pipe that runs along the passenger side on top of the engine (next to the fuel rail on that side) was in fact warm to the touch, but the one that runs along the driver’s side was not at all. Again, is that normal, at least until the engine is fully warmed up? Or, is there maybe some kind of blockage issue going on?

Also wondering if she is in fact experiencing delayed warm up if possibly one or both thermostats had been removed by the PO for some reason, or are stuck open.

For a comparison, my 88 V12 seems to always have a bit of condensation out the pipes after sitting overnight. Most of it I would guess is the exhaust system. Unless you are 0% humidity,water is going to condense in there. And if you are running an old tank of gas, you could have water condensation in the tank, which is burning away.

My cooling system is in top shape, and it takes about 10 minutes of actual driving to get it fully warmed up (for me, 180F) It’s been a while since I idled it to warm up, but I think it took 15+ minutes.

both cooling pipes should be warm. That is odd. I would replace your thermostats first, very important and easy to do. OEM is 195F I think, but I chose 180F so the engine runs cooler. In Dallas, you may want to do the same. Also remember, the temp gauge only checks on one rail, not the other. When i was getting my cooling system up and running, I purchased a laser thermometer for about $30. Came in handy for checking temps all around the engine to see how things were cooling/heating up. Exhaust gas or flue gas is emitted as a result of the combustion of fuels such as natural gas, gasoline, petrol, biodiesel blends, diesel fuel, fuel oil, or coal. According to the type of engine, it is discharged into the atmosphere through an exhaust pipe, flue gas stack, or propelling nozzle. It often disperses downwind in a pattern called an exhaust plume. It is a major component of motor vehicle emissions (and from stationary internal combustion engines), which can also include: Motor vehic...

Good info and advice, Gregmatic … And yes, I did buy one of those laser gizmos and enjoyed using (playing?) with it on my X-300 for some time, but somehow it “disappeared” not long afterwards …

So, looks like I will have to buy another one …

Once I have it I may get back with you as to what various temps are (should be) around the engine bay when fully warmed up.

Either here or the V12 forum there was an extensive post of temperatures on the engine. Poster included infrared photos. Interesting reading.
Agree thermos first. Lots of interesting reading regards affect of thermos at “controlling” coolant temps.

I think you people are wayyy too worried!

Either here or the V12 forum there was an extensive post of temperatures on the engine. Poster included infrared photos. Interesting reading.
Agree thermos first. Lots of interesting reading regards affect of thermos at “controlling” coolant temps.

It’s actually a pair of round metal pipes … running the length along the top of the engine, close to the fuel rails (i.e. the rectangular “cage” feeding the injectors) … Maybe it is not the same set up as on the pre-face lifts … ?

Well, I don’t think the XJ6s had engine temp “issues”, sensitivities, or whatever you want to call them, at least with the XJ40s and X-300s … basically an attempt to avoid experiencing dropped valve seats …

Sounds like the secondary air. Does each round pipe have 6 little pipes going down and into the inlet manifold. On my picture the fuel rail is red (thank you SD Faircloth) and the secondary air rail is gray metal 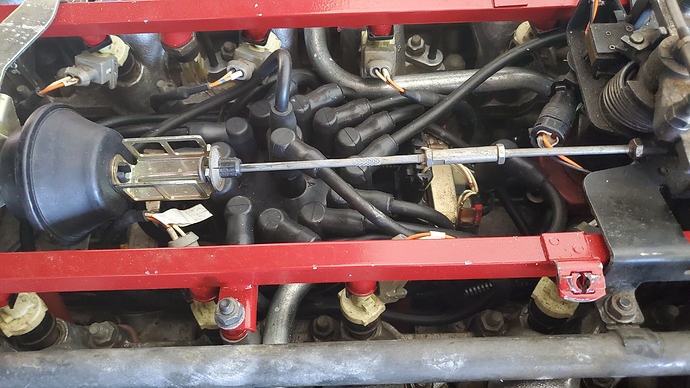 Those round tubes by the fuel rail sound like the air injection system pipes; they do not carry coolant and would feel the temperature of the adjacent engine parts.

The secondary air-injection is an ancillary system, in place to help the catalytic converters light up (reach operation temperature) quickly. After 2-3 minutes, the system is just added weight.

However, I can envision a situation where they could get very hot.
There are one-way check valves at the end, buried between the engine and the firewall. They could be rusted and not functioning, which means that small exhaust leak could be happening and making the tubes feel “hotter”.

EDIT: The check valves should only allow flow from the pump to the exhaust manifold and not backwards. Item #6 (one for each rail) 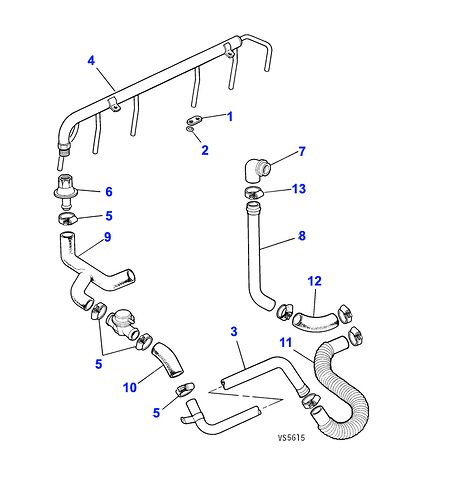 one of the first things I did on my XJS was get rid of those air rails, before I even got it running! A bit of work getting all the bolts machined to plug up the holes, but it worked!

So much extra room getting rid of all that junk. I even got rid of the smog pump (of course, now no A/C, but that’s OK for now…i live in a cool climate)

So much extra room getting rid of all that junk. I even got rid of the smog pump

Two brief comments on the above:

Reasoning? All cars built after 2010 are very smog compliant, and it’s almost impossible to tamper with. So no need to test them. And now, in 2020, the vast majority of cars are 2010 or newer. Even cars built in the 90s through 2010 are quite smog compliant. The amount of cars like ours that put out excess smog are such a drop in the bucket, both in volume of cars and amount of pollution, it is not worth spending the money testing them.

Tell that to CA’s state legislature. All crs from 75 upo must be checked every two years. My 94 jeep is due for another SMOG tussle…

Living in Redneck country I am fortunate … we don’t got no steenkin smog test.
I did get tired of FF67 on my 95 V12 with 36CU, so I had Roger Bywater send me an enhanced chip, on which he also disabled FF67 for me (since it was no longer relevant).
And as good measure I also replaced the O2 sensors

You Tube again. A heavy truck mechanic in NORCAl.
Charged with the restoration of a semi that his client bought in the mid west. From a dealership. A 1000,000 mile truck in beautiful condition. Used car red!!! Dealer assured him it was not a “delete” truck .

No test in those states?? Whoah, this is an EPA reg. it is in violation. But, were does the enforcement come in, other than the SMOG tough states like CA??

Living in Redneck country I am fortunate … we don’t got no steenkin smog test.
I did get tired of FF67 on my 95 V12 with 36CU, so I had Roger Bywater send me an enhanced chip, on which he also disabled FF67 for me (since it was no longer relevant).
And as good measure I also replaced the O2 sensors

Yeah, I remember this thread Jim. You were wondering about the FF67. IIRC, I gave you the part numbers for the GM check valves (a few bucks from the local store) vs the Jaguar ones which will cost your arm and leg… :-)))

Anyhow, the EPROM Bywater provides for the 36CU is the way to go. At 25+ years old, the engine is far from “tuned” and if you recall it, you probably had to use the drill to free up the holes, plugged with decade-worth of carbon deposits.

Tell that to CA’s state legislature. All crs from 75 upo must be checked every two years. My 94 jeep is due for another SMOG tussle…

California, that explains it! I left the great tax and spend state back in 2006.

California will leave anything in place that can generate revenue. Plus I’m sure the mechanics unions have a special say in keeping smog testing in place.

Yeah. You really helped me a lot. With tips and dollars. Yep, drill for sure.
One of those check valves really didn’t want to me off! And both were toast…could blow through in the wrong direction.
If I ever had to do that again, I wouldn’t.

I would rip out the secondary air