I successfully repaired my Mark V temperature gauge which had the tube cut off at the capillary bulb.
I read Roger’s writeup and a couple of others I found on the web. Just recording here a few other details and observations.
This gauge X.70915/1 is unique to Mark V among Jaguars, may have been used in other marques, but I did not find any reference on the web. 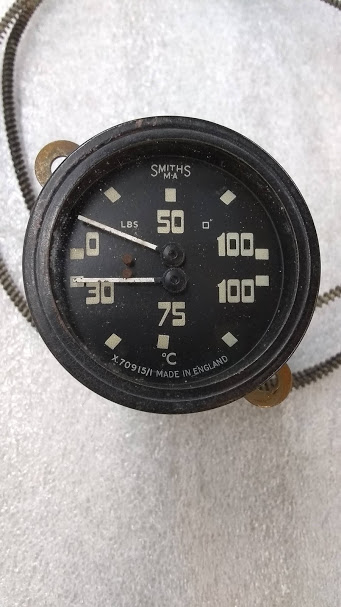 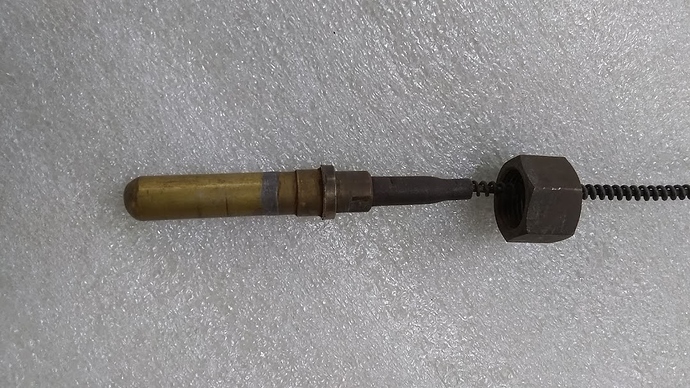 Removing the short cutoff tube from the capillary, I discovered it extended nearly to the bottom of the bulb. I did not duplicate this aspect when I inserted the remaining end of the tube, left it protruding 1/2", as I was having to remove some of the wound spring and didn’t want to shorten the finished length any more than I needed to. This may have been a mistake, as I will explain later. 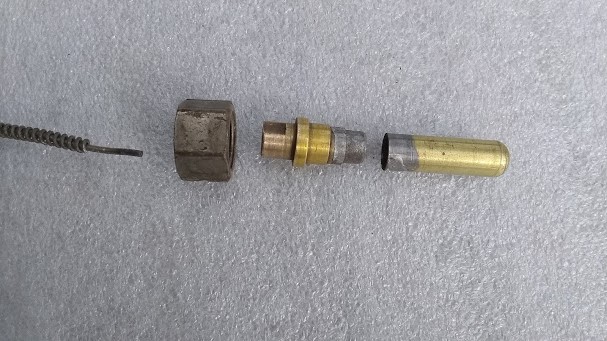 The first step using a propane torch is to solder the tube into the capillary body with the end bulb off so you can check the tube is not blocked afterwards. I used a .017" guitar string. 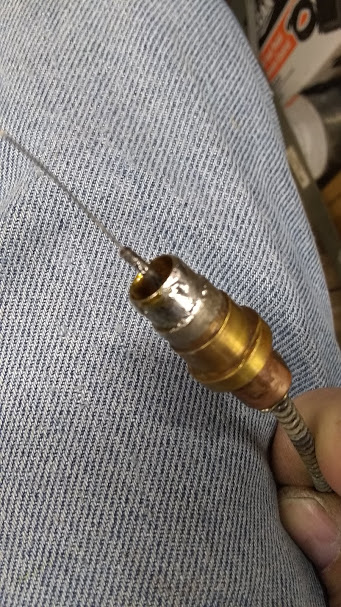 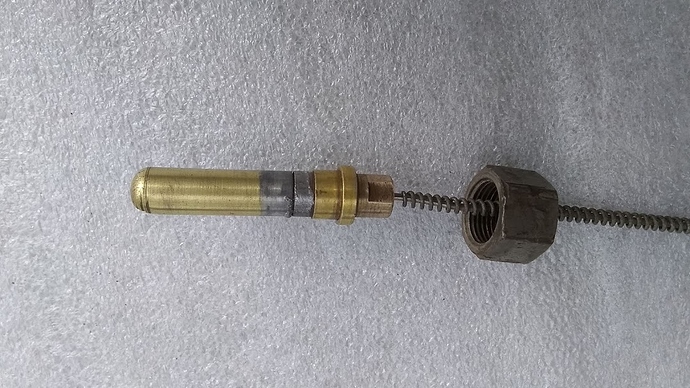 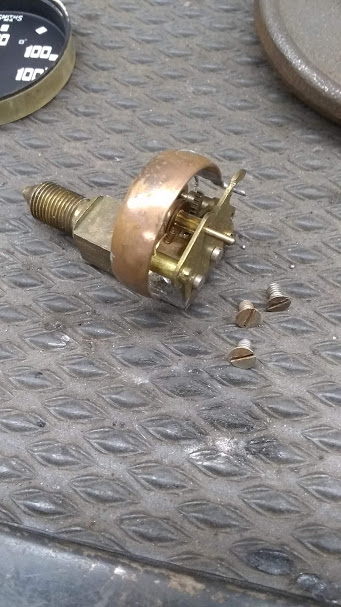 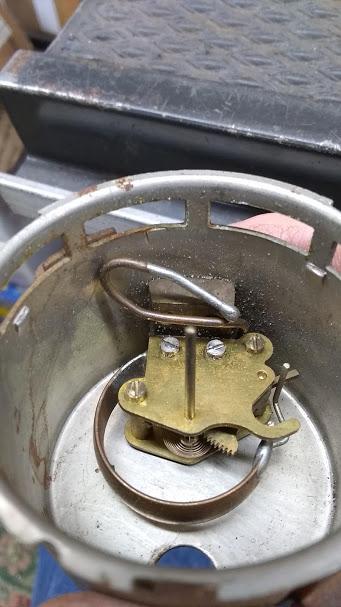 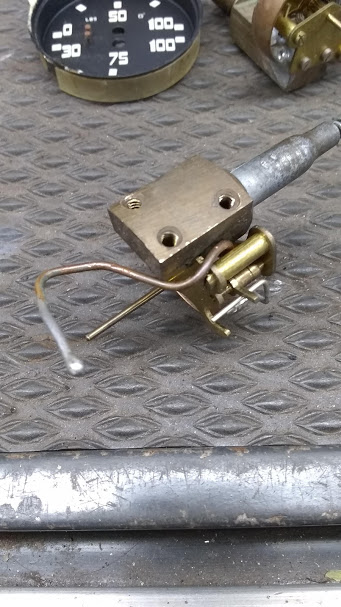 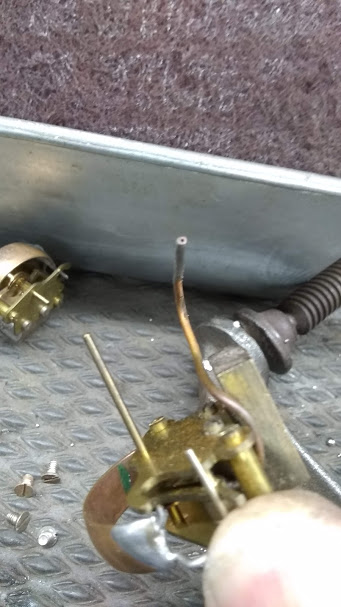 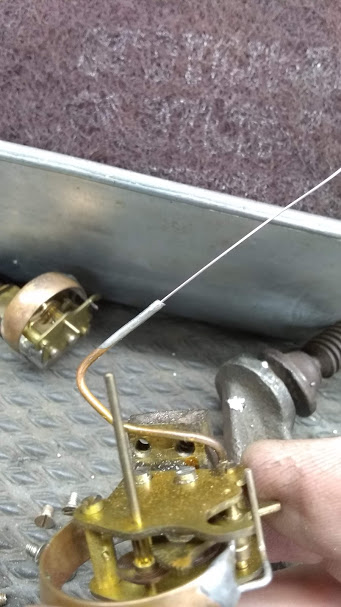 IMG_20201004_170057752341×607 54.2 KB
Then put a blob of solder near the end but not blocking it, ready for the final step.
I did not disturb the gauge end of the long tube, but if you have to replace that, be careful not to overheat the body and loosen the Bourdon tube, that curved copper thing that moves the gears.
To fill, I used starting fluid which is mostly ether with some heptane and propane, sprayed into a jar with a lid. You need a container with an opening big enough to fit in the Bourdon mechanism with the small fill tube submerged at the bottom. 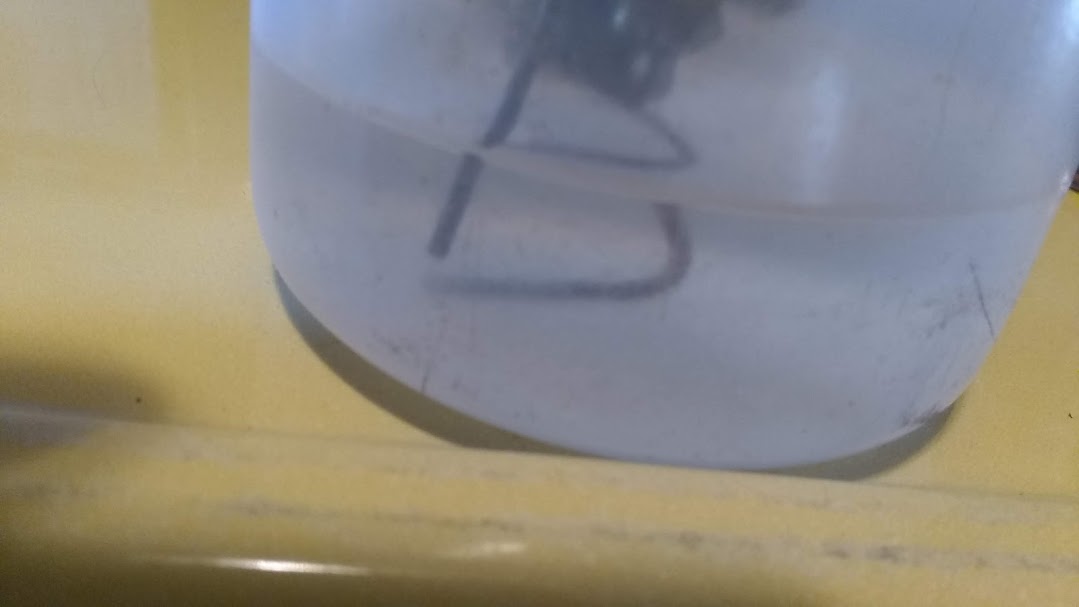 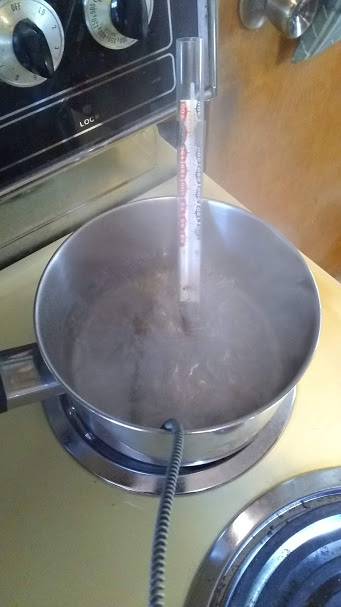 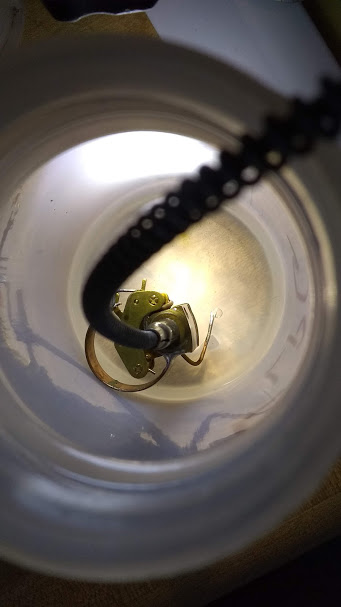 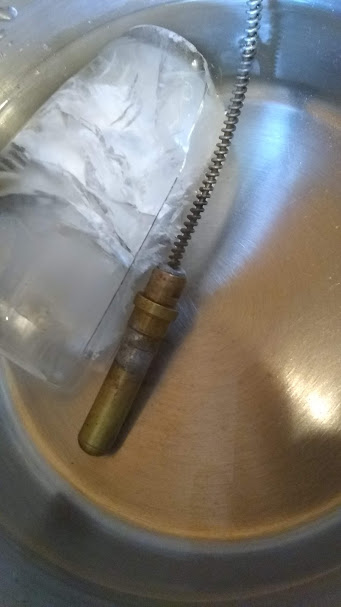 IMG_20201006_094230735341×607 33.8 KB
I couldn’t tell how much was going in, so I went through the heat/cold cycle 4 times until there were very few bubbles the 4th time.
Then leaving the bulb in the ice water, pull the mechanism out of the ether, close the jar lid, and solder the end of the fill tube closed with the small soldering iron, and not too much heat. You have to hold it downwards so the blob of solder will flow down and cover the end. The ether tries to burp out a little bit with a little pssst, but you don’t lose much before you get ahead of it and get the tube closed.
You can test it now in the hot water, and if the pinion gear moves a little bit you know you are successful. It only moves half a turn, about 4 or 5 teeth.
Assemble and test. 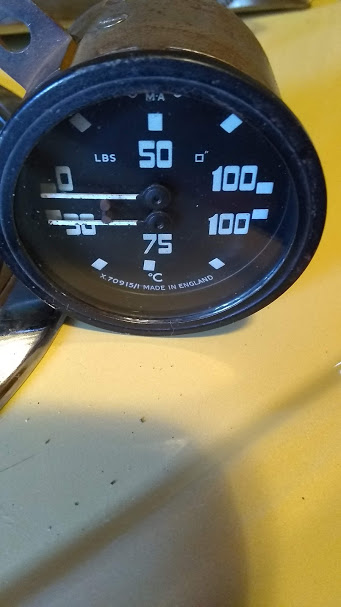 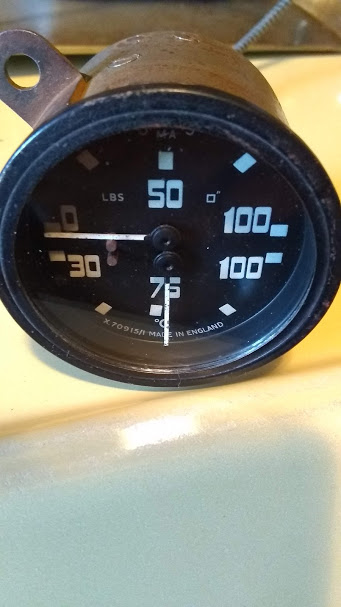 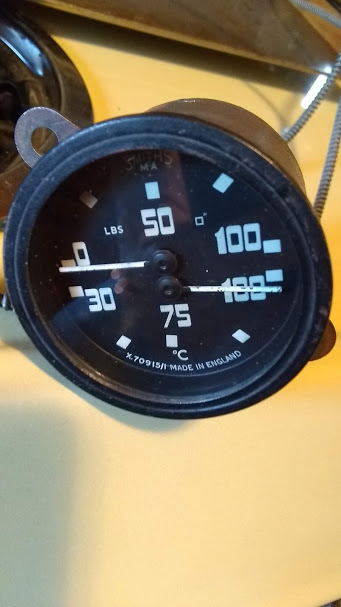 IMG_20201006_162856859341×607 42.4 KB
I mentioned that I was not sure about the tube insertion in the bulb, and the filling amount. In water boiling at near 100C, my needle ran around into the oil pressure side, so maybe I should have inserted the tube farther or I may have put in too much ether.
When I get some running time on this engine, if it is too inaccurate I may try again.
1 Like
Mk7 daydreams and nightmares
Mk7 daydreams and nightmares
ptelivuo (Pekka T.) October 8, 2020, 3:45pm #2

Great write up! And seems to have worked well, I think I had my gauge also to 100°C a couple of times and it wasn’t boiling, so maybe that’s within the orignal designs accuracy.

Also not trying to hi.jack this thread, but since you mentioned the uniqueness of the MKV instruments, no I haven’t come across any other car using the same instruments either (although the XK and MKVII instruments basically are only different due to the typeface or the face plate) BUT I found the car I mentioned in another thread.

It was recently in an auction in France, this one:

What I find even stranger is that the instruments seem to be British JAEGER but the use the 100% exact same typeface, the font, that the Jaguar MKV models use on their instruments. Weird, huh?

How did the instrument makers get those? As some sort of decals or paint / print screenns? 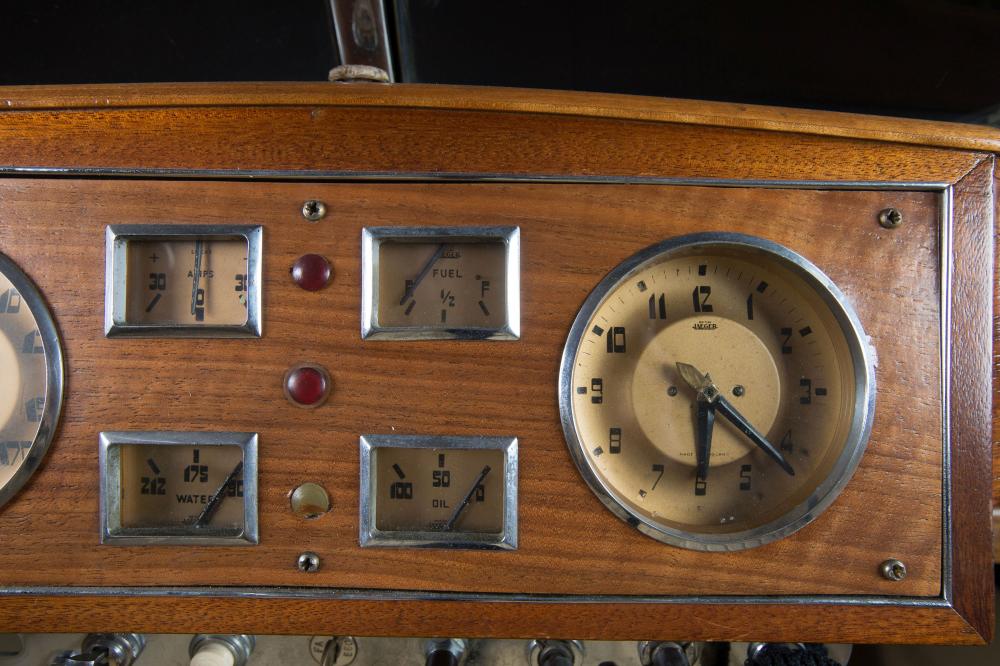 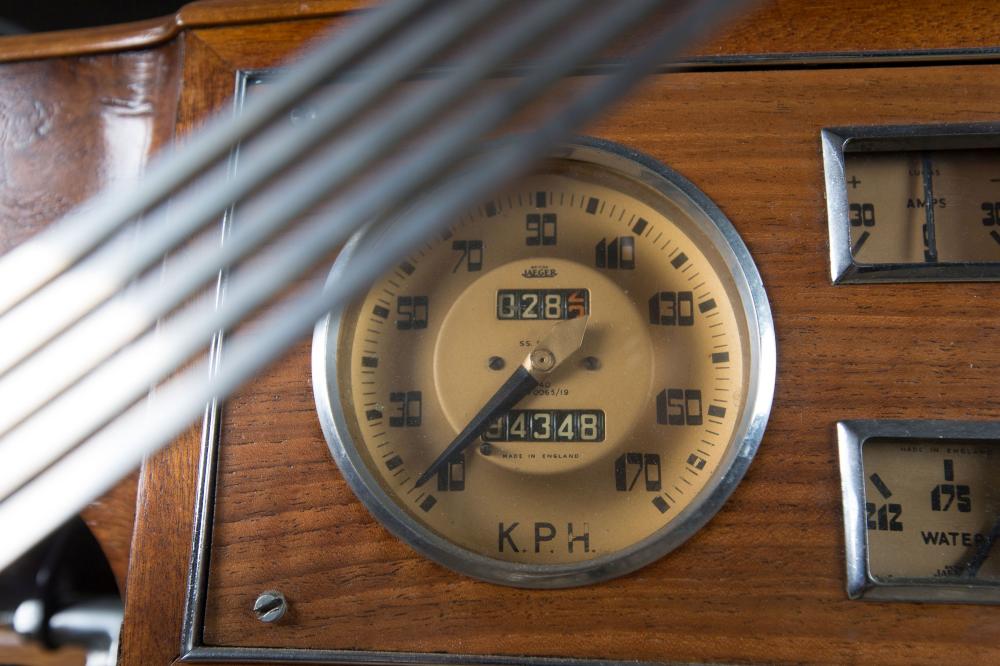 Must have been one of those art-deco things that came in style and went out again just as fast.
BTW the Mark V gauge has the two mounting ears; these are not on the SS/Mk4/120/140 gauges, which tend to try to rotate while you are trying to tighten the attachment clips.
The Mark V gauge mounts on the front of the instrument panel, so I discovered I’ll have to feed the bulb through it.

A brilliant write up. Thanks.
I almost wish mine was broken so that I could have some fun repairing it!

It’s very close, but look at the 1s: that kind of type simply was in style back then.

Hi Rob, glad to hear of your success. It is fun to do this refill, if done safely and avoiding any fire pitfalls.

My process just used ether. I don’t know if other components of starting fluid will give a boiling-water pressure greater than the 100 degree marking point for ether alone. Also, maybe the gauge mechanism has an offset rotation at bottom peg end which may have changed under jostling or perhaps the gauge mechanisms have either a bit more expansion at boiling now or maybe the gauge was above 100 reading at boiling from time immemorial on your car. At any rate, if your gauge reading is able to show thermostat open temp and you can get a sense of how much above opening, and where say 90 degrees C is, then the pucker factor element when watching the gauge is solved even if 100 degrees is a little above that on the gauge. In my opinion, it is better to have the pucker factor kick in slightly early with a gauge that reads a little high towards the boiling end (compared to a gauge which reads low and engine may be boiling before pucker factor is induced).