Hi Vlad,
I just saw your PM so I’ll try to answer here on the forum. I can tell you what colour I used but I’d caution you to check it very carefully before you go ahead because maroon seems to be a very unusual colour, appearing quite different in different lighting.

Also, some people who have tried to replicate it have ended up with a colour too light, too red or with too much purple.

What I used was an original Jaguar colour from 1987 which was used on Sovereign models that year and I owned such a car in that colour. I also have a set of contemporary 1960s-70s colour chips and the chip for Opalescent Maroon was a dead match.

Here’s a couple of early shots after I’d finished the restoration, about 1999. 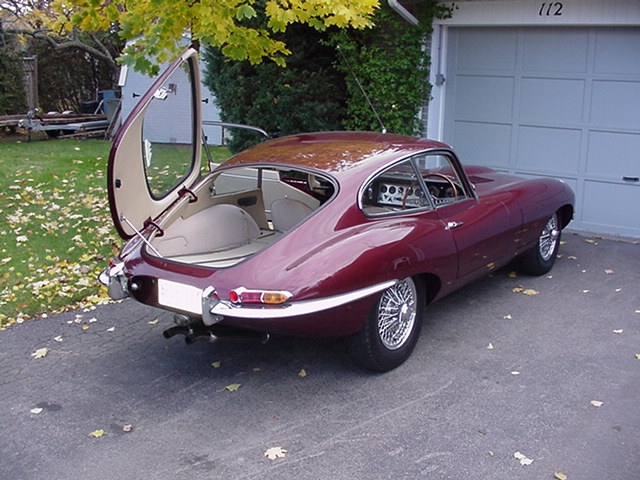 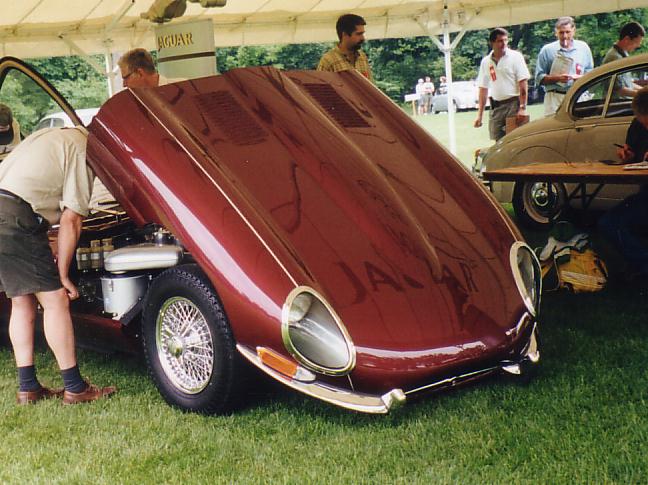 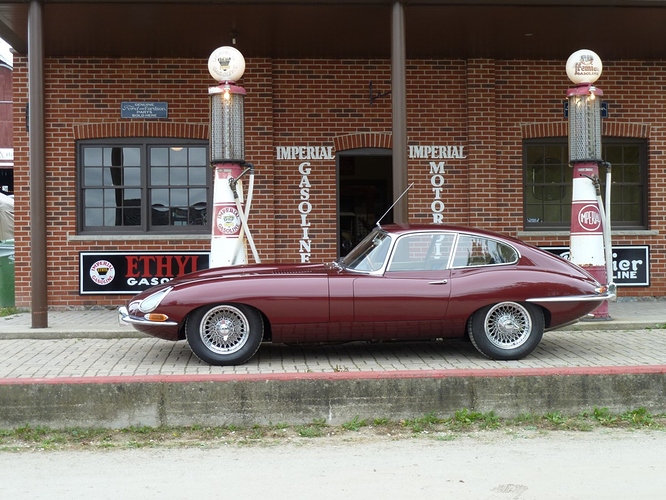 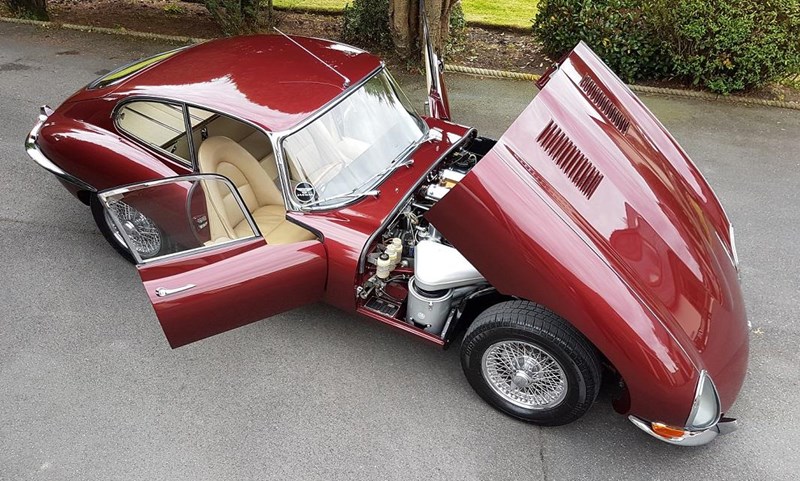 That’s not the best photo, I’ve always loved this one. 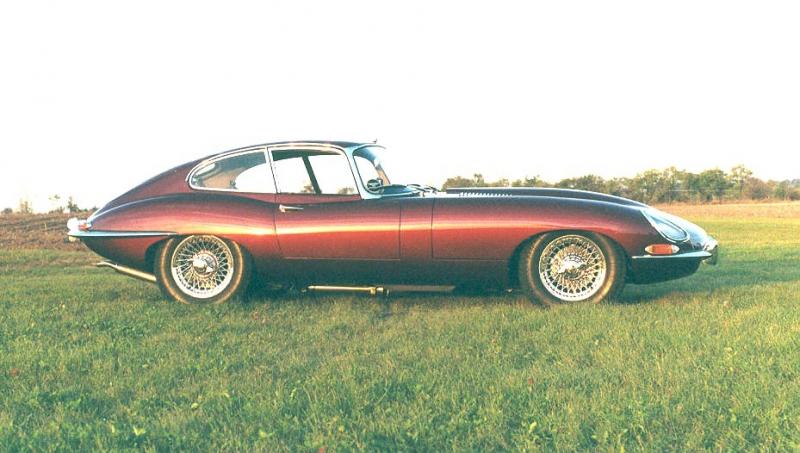 …check it very carefully before you go ahead because maroon seems to be a very unusual colour, appearing quite different in different lighting.

A non-metallic Maroon is challenging enough to get ‘right’ (many look too purple to me), but the ‘Opalescent’ aspect only compounds this challenge.

Clive is right about maroon looking very different in different light, but by definition, Opalescent also means ‘giving many colors’.

I recently saw an original-paint Opalescent Dark Green car, and it looked nothing like most of the cars you see painted that color these days. Most modern formulations make it sort of an Emerald Green, but the original color is much more sophisticated, looking almost black in low-light conditions, and almost a muddy-green in direct light…very challenging to replicate.

Here’s a couple of early shots after I’d finished the restoration, about 1999.

Fantastic, and a great color combination.

Thank you Clive!
What an awesome car!
v

Fantastic, and a great color combination.

Truly one of JL’s prettiest cars!

I am in the process of a full restoration on chassis (1E) 10154 which is a 1964 Roadster with Opalescent Maroon paint and a maroon interior according to the Heritage Certificat #67093. The paint on this car is original. I have done extensive color matching with dozens of trial runs to get the correct shade/color and flake grain size against the original color paint. THE ORIGINAL PAINT IS LACQUER AND THIS IS URETHANE BASECOAT/ CLEAR COAT. I am willing to share my results and hope this helps other owners of this color out there for “the elusive opalescent maroon” color.
Cheers
Tom Zebrasky
CATZ Auto restoration

Has anyone tried this? Seems it’s not so elusive on Amazon.

I wonder how it matches up.

the question is, what is their reference? how did they get the original formulation on amazon, since us jag owners have been trying to nail it down without success?>

You would have to ask https://theautopaintdepot.com/ since they are the sellers on Amazon. Their paint code reference is 8317LH, which I believe is the original Dupont code. I’m as curious as you are! Just thought someone else may have already checked this out.

are you painting yours maroon?
mine came out nice - i started with original code, had a couple of stores extrapolate to match current codes, then picked most pleasing 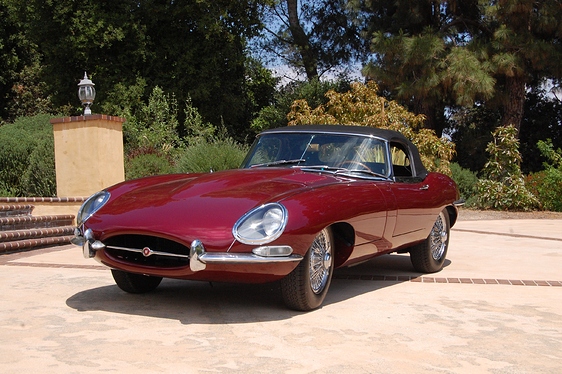 Mine is already Opalescent Maroon, courtesy of Dan Mooney - Classic Jaguar. I’m interested in this thread because I’m looking for some touchup paint for a few areas under the bonnet where the bonnet and splash panels didn’t quite line up to perfection. 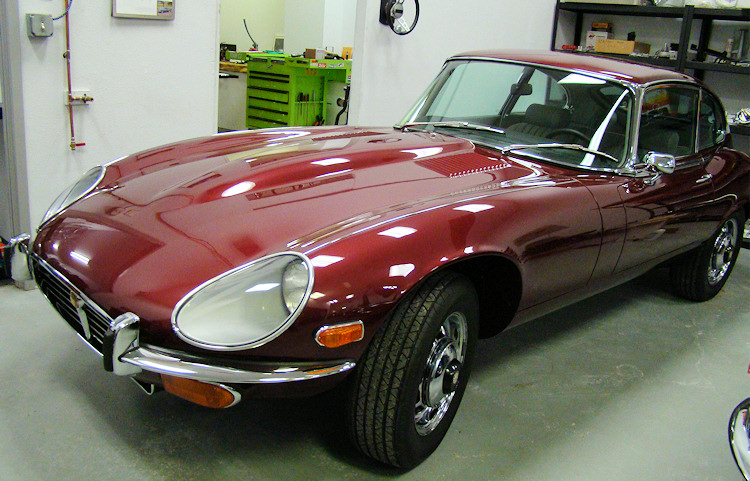 Steve, is it not possible to go back to Dan Mooney and ask him for the paint brand and code?
Tom

Interesting topic!
I have a 4,2E and 420G, both painted in Germany around 1998 and 2008, in opal dark green. I always thought the E looked a bit too grey, andvthe G has too much and too large metal flakes.
Proof came when I got my 4,2 Mk10, with original paint. This has a lovely green Colour which the others lack.
So I concluded that the German paint mix for opal dark green, available in modern times, is far different to what Jaguar used in the 60s.

…you say that like it’s a bad thing. Snif.

many look too purple to me)

…you say that like it’s a bad thing. Snif.

Ha Ha! Good one! But then I kinda like purple.

Wayne:
Anyway, yes, I have gone to local paint shops to get paint matched using their computerized scanning setups, however, the end result was that there were many back and forth trips to spray, dry, check and try again by making “adjustments” until finally there was a match. This was much like 30 ~ 40 years ago when it was all done by eye, so what’s the point, other than maybe getting a closer starting point?

Tom:
Somehow I have my doubts about keeping detailed records for 12 years let alone remembering.

This was much like 30 ~ 40 years ago when it was all done by eye, so what’s the point, other than maybe getting a closer starting point?

I’ve spoken to more than one paint shop who bought one of those scanners, gave up, and went back to doing it the old fashioned way. But then I’ve spoken to people who’ve had great results with them…strange.

My favorite local paint shop still does it by eye, drop-by-drop, and if you pay them a few extra bucks, they’ll take the time to document the ‘recipe’, so you can order an exact replica can next time.

And yes @Wiggles, I have an almost irrational aversion to purple, but I will always defend your right to paint anything you like in that dastardly color

About 20 years ago there was an Australian on the E-type list who had a red 2+2; I can almost recall his name. Anyway, he took his car to a body shop to have some work done on it and when asked about the color, if he knew what red it was, he told the shop owner to just match the existing red. The shop owner goes around the car with his scanner and then asked the car owner which red he wanted matched. IIRC, there were several slightly different shades of red on the car dating from previous repairs and, yes, perhaps some from weathering and sun fading also. The car owner said the car all looked to be the same shade of red to him.