I received an email from Patrick Coombs the other day relating to information stored on the old site about the MKVI:

"This vehicle really did exist and my Father was the 3rd owner after George Hack, in Bristol.

My father was an ex RAF regiment soldier and did a lot of voluntary service at Filton Aerodrome that was still partly a military base. There he met George Hack, who coincidentally was about to sell the jaguar. My Dad used his military pension to buy it and owned it for about 2 years, before selling it on to the owner of a string of butcher shops, who operated out of Thornbury. After that, I was not able to trace any further history, until I received a phone call in the middle of the night from a very excited American guy, who wanted to know everything there was to know about the car.

I realised the other day when I was looking at it again, that the thread I had found was on your old website, so I thought I would contact you and give you a photo of the car!!

Tony Otelo owned back in 1999, does anyone know where it is today?" 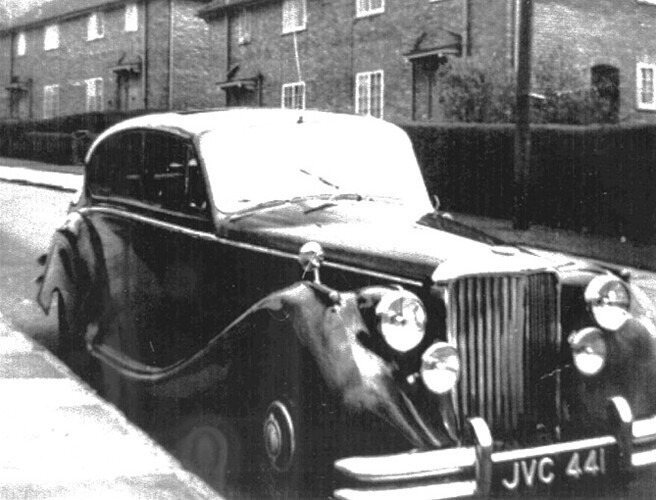 I have seen other photos of it, possibly here on JagLovers. The radiator was moved forward and a longer bonnet fitted unlike the odd MkIV that has had an XK engine fitted by cutting into the scuttle.It appears in Allan Crouch’s book on pages 131-133.

Do you know if it was fitted with a gearbox from the XK120? That would have given it quite an apreciable top speed.

The last I heard 623053 (JVC 441) is still in the hands of Tony Otolo near Boston in Massachusetts USA. This is the one that William Lyons drove regularly.

The other one 620004 (HRW 488) was the factory test mule and was broken up by the factory, not sold, presumably not saleable due to numerous mule modifications.

The registration HRW 488 was transferred to another car 623173. It is not clear whether this last one had an XK engine or a standard pushrod engine, or both (reports vary). It has not been located, presumed lost.

The SH/JH gearbox is exactly the same for Mark V and XK120 (up to '52), no difference in ratios there, but certainly different rear axle ratios could have been tried in the test mule.

Okay, now you’ve peaked my interest Rob. What was the axle ratio in the 120 compared to the MKV?

Trust you are well?

Yes, keeping busy here with car restoration, and I’m the facilities engineer at my church, which means I install emergency lights and big screen projectors, repair holes in walls and fix leaky plumbing and fix the lawn mowing tractor and any other broken stuff.

Good to know you are okay and busy.

How would installing a 3.92 ratio in a MKV with an ENV diff affect the performance of the car?

It would give 8% higher speed in each gear and reduce acceleration a bit. In top gear that is if the engine has enough HP to overcome the rolling and wind redistance.

As Pekka points out, you need the horsepower and so to achieve maximum top speed you need to arrange for the peak power to correspond. If you have too high a gearing then wind resistance will prevent you from even getting up your to your engine’s peak.

Many years ago I plotted the power and speed graphs for our cars here. You can probably assume the drag factor of the MkV is similar to the SS Saloon as the actual top speeds from the road tests are very similar.

Once and if I get it all sorted out and get my “running in” completed on the MKV DHC I will take her to a dyno just out of curiosity AND to be able to adjust the AFR to something reasonable under load, so I will know I am not running lean at 100-120km/h

I did the same for both my E-types before driving through Europe as I would hate to blow a hole in a piston on the German Autobahn at 200km/h+! (125 mph+)

Three years ago when we were coming back from Europe (via Denmark and Sweden) with my at the time 15 year old son, we hit 229km/h (142 mph) on the GPS near Celle in Germany in the evening when suddenly there was no traffic. The problem was that we were very soon at our exit from the Autobahn to our hotel.

That’s an unrestored car and not-rebuilt engine in any way, with just a bit over 100.000kms on the dial. Top up of course, very noisy above 5.000rpm in top gear, but not as much engine noise IMO as with the XK engine.

The MKV / MKIV engine is fine IMO until 4.000rpm, but unlike with the V12 I don’t feel comfortable taking it higher. Maybe I should think about changing the final drive (diff) some day if the dyno numbers look good!

It’s not my car’s original rear axle anyways, when I bought the car it had the rear axle and rear brakes from a Ford Fairlane or something and therefore the spare wheel well (and the fuel tank inside it!

) had been “reformed” with a sledge hammer!

It would be interesting to find out what had been done to that one MKIV DHC that allowed it to achieve the 140+ mph on the salt flat.

Many years ago I plotted the power and speed graphs for our cars here. You can probably assume the drag factor of the MkV is similar to the SS Saloon as the actual top speeds from the road tests are very similar.

Thank you very much for all that wonderful information. I was merely interested in what might happen with the different ‘diff’ ratios? I am not likely to make such changes as it’s expensive and very time consuming. I’d much rather explore adding an overdrive to the drivetrain as a few people seem to have done, successfully. Putting the car on a dynamometer might be an interesting exercise to determine and set optimum timing and mixture for the car.

The MKV / MKIV engine is fine IMO until 4.000rpm, but unlike with the V12 I don’t feel comfortable taking it higher.
It would be interesting to find out what had been done to that one MKIV DHC that allowed it to achieve the 140+ mph on the salt flat.

My SS wasn’t very happy above 4000 rpm either but after balancing the engine it’s much happier now that it isn’t wasting its energy trying to shake itself apart.

I don’t know the story of the MkIV on the salt. Do you have a link?

I don’t know the story of the MkIV on the salt. Do you have a link?

Hi, Well at first I thought of course that Ed must have tweaked this one, just a bit. But no, apparently this happened somewhere in the US of A. Is that Lompoc, California where the speed trial took place? http://www.saloondata.com/gallery/zoom/?id=429066 Anybody know where that car would be now? Cheers! Pekka T. Fin. PS. I have now completed 1600 miles on my MKV DHC, but not much faster than 70 mph.

And sorry, I remembered a few things wrong.

Hmmm! If I believe in my power/speed chart it would need at least 220 bhp. Perhaps there was 30 mph tail wind that day.

Hmmm! If I believe in my power/speed chart it would need at least 220 bhp. Perhaps there was 30 mph tail wind that day.

I think it may be more that they removed the headlamps and the windshield and used some kind of tonneau cover over the passenger area, like we were guessing five years ago in that discussion.

Also removing the side panels from engine bay would reduce engine bay air resistance and like we can see in many pics form the old speed trials, taping over door gaps etc can also help reduce drag quite a bit and smooth hubcaps like @Wiggles on his Jee-type.

Perhaps there was 30 mph tail wind that day.

That reminded me that the last time we flew back home form Florida, the Finnair flight had a 300+ mph tail wind, we had a ground speed of over 1380km/h = over 850 mph. The flight crew was really excited as they made a record and MIA → HEL in less than seven hours when it normally could take about ten hours.

Probably will jump the Jeep’s top speed to ludicrous…

Probably will jump the Jeep’s top speed to ludicrous…

So you are thinking from Snail to caterpillar?