The search is half the fun

Maybe a bit less than half. But the anticipation’s kind of delicious don’t you think?

I’m on the hunt for a near sixty-year old, relatively slow, cold, temperamental, uncomfortable, antique automobile. Why would anyone want one?

If you have to ask, you’ll never know.

It’s superb, but expensive for a LHD that’s been converted, I think.

And if there are any other Series Ones on Carsales that aren’t too overpriced that I should be looking at.

My biggest fear is paying too much.

The car in question is a very early ‘flat floor’ model which is sought after by collectors and, hence, carries a pretty significant price premium compared to a later Series 1 car.

If your greatest fear is paying too much, steer clear of the very early cars and buy a ‘64-‘67 E-type, which are still expensive but much less so than a flat-floor.

Finally: your greatest fear should actually be buying a pretty car with botched up bodywork under the shiny paint. Thread carefully…there are many such pigs out there.

Agree with Lopena. Every now and then I get the urge to buy an XK140 or 150. But the truth is that E Types drive much better than these cars. And the later the E Type, the better it will drive. In fact the series 2 cars drive the best - not much better than series 1 4.2 models, but they do have a few more comforts in the cabin and a better cooling system.
So unless you want to sit your car in your lounge room and never drive it (a waste of a good car) buy a series 1, 4.2litre - the best looking and the a wonderful drive.,

There is quite a bit that you need to understand about these to get prepared to buy. More so even for the very early cars that have particular features the support the value. This one does not appear to have a welded louvre bonnet - it may have just missed out through model progression - but this needs to be understood. The LHD conversion is also not for many purists. Also I would have to understand what “detailed engine” means. Many cars/engines at this price will be low mileage marque specialist rebuilds. I would also want to know if the engine frames were replaced during restoration (they rust from the inside out). If you are serious and not particularly knowledgeable (yet) I would have it appraised.

Beautiful car. Maybe I missed it but I don’t see any mention about matching #,s and JDHT certificate. At that price it would be a must (for me).

Hi Tom
If the car is in Canberra I know someone who will more than likely know the car….if you want to private Message me with your details , I can pass them on to my acquaintance in Canberra …….

Thanks for all the replies and for clarifying what I think I knew anyway, based on this logic:

It’s my money, so it only matters what I think. And here are my preferences:

A Series 3 OTS is tempting, but I believe this car was never meant to have such a large engine.

Series 1 3.8s are collectable, but I’m not a collector. The tombstone seats are gorgeous and would support me pretty well on the way to my osteopath I imagine.

That leaves a Series 1 4.2. I already have a convertible V8 Mercedes, so it’s a FHC. I’m not going to drive it at night so I don’t care about the poor headlights.

I would fit AC and upgrade the cooling system to cope with an Australian summer.

When did the cam covers change - with the Series 1.5?

If anyone knows of any Series 2 4.2s for sale in Australia that I should be looking at, let me know!

So what you want is this!..…unfortunately it’s not for sale 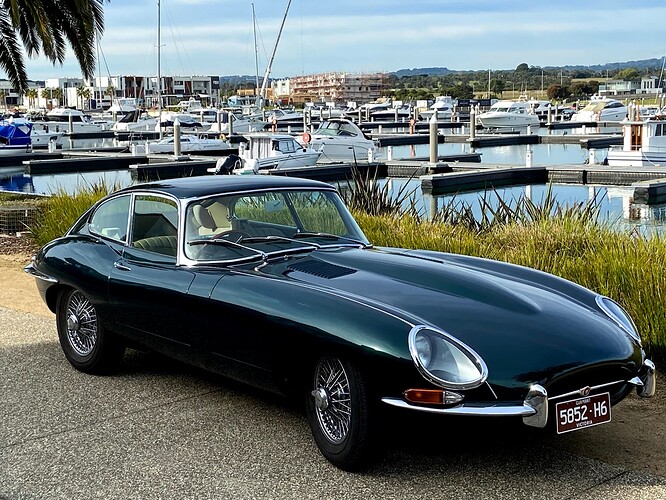