Finally was able to obtain a couple of Jag Tibbe key blanks this week to have duplicates cut for Superblack and Superblue.

Also found a person with a Tibbe key cutting machine who cuts the keys for $$, but the question has arisen whether these keys use 6 or 8 discs, as apparently earlier Jags used 6 and newer ones the 8 version. Anyone know what the cut-off MY is between the two for the XJS?

Can you not count the cuts on your old keys?

Nope. Doesn’t appear to be that EZ, as there doesn’t look to be that clear of a division between what’s a “cut” and what isn’t.

What amazes me is that the key cutter dude can’t even answer that question for me, and yet he (supposedly) has been cutting Jaguar Tibbe keys for a long time.

No, neither Jag dealership in the DFW area has had a Tibbe key cutting machine for many years now.

The only place I have heard in Texas (until now) is a gent in SW TX who has a machine to do it, that I only found out about through one of our two local Jag clubs. This was a few years ago, too, so don’t know if he is even still around or doing them.

So are you saying the dealership there really has a machine and cuts them?

The only other options I knew of was the gent in FL that I mentioned earlier (I think $38.00 per key, but gives multi discounts) and Key King clear down in Australia.

KG has a nice price that even includes the Jag blank, but the shipping is of course steep to the U.S.

May I suggest you ask them again? There must be some type of misunderstanding…

Every single of the 3 Jaguar dealerships in Houston can cut Tibbe or Spindle keys…Every single one. I just got keys cut before the end of the year… the dealer in 5th St in Austin can as well. …They ask you for proof of ownership and make the keys. …These type of keys where used all the way up to the last traditionally designed XJ in 2008. I hear of people getting their keys cut at their local dealerships in both this and the other forum all the time. Unless both the Dallas dealerships just opened in the past year, I am hard pressed to think they both can’t make copies . This would mean they can’t make a copy for an 08 Jaguar model either.

Wow. I’m really lost here - I thought the last MY for the Tibbe was '03 (i.e. the X-308s). In fact, that was the reason given to me why they supposedly got rid of their machines … i.e. Jag hasn’t used them in over 15 years … If you’re correct, I agree … why would they get rid of something needed close to less than 10 years ago? …

I had been wondering about the Austin dealership … If they have it, that’s close enough for a drive down there - approx. 2 hours - to get all 3 done … If we have the original key, though, I don’t know why they need to see proof of ownership … :doh: …

But WHAT is the dividing MY?

The 1990-1997 can use the RFID keys because there is no KTM so it does not matter as long as the cuts are correct.(it will ignore the RFID ‘chip’)

when i found out what tibbe keys are …well…this is also too much over engineering…there are picking machines for those locks too…oh well, let em steal it… just make sure you got ins.

Well, and that’s the issue I’m having. I want to buy one of those, but apparently they only work for the 6-slot keys, or at least the picks do that I’ve found on Ebay. I need it b/c I don’t know my key code and I need duplicates cut – the pick lock will tell me what the code is after I insert it into the lock. From what Motor says, it sounds like Superblack, my '92 XJS and Superblue, my '94 XJS use 8-slot keys. One of the larger, usual Jag parts suspects though is now telling me the “older” cars used the 6-slots and the newer ones the 8-slots (which would seem to make sense, as Jag maybe ran out of available # combinations for the 6 slots earlier on?

The 1990-1997 can use the RFID keys because there is no KTM so it does not matter as long as the cuts are correct.(it will ignore the RFID ‘chip’)

But WHAT is the dividing MY?

btw, what is the “fourth” cut?

oh well, let em steal it… just make sure you got ins.

I never bother locking my cars. I don’t leave anything valuable in them. If someone wants to take it, they will be professionals who will defeat any security measures, or oiks who will break things to get in.

And a rusty 1993 SAAB 900 is an unlikely target, the Alfa is a convertable and I don’t want to replace that damned top again if someone takes a Stanley knife to it, and the Jag will be abandoned by a casual thief at the first stop for fuel.

But now I am obsessed with something that I have just stated as a non-issue.

I really need to get some work done this morning, but I am now spening my time checking the charge on that (possibly bogus) 12V backup battery for the security system (that I will never use).

Years ago for a different car I made a “secret lock” It was a grounding switch…it looked like the other knobs on the dash…but you didn’t pull on it …you had to turn it sideways …fooled everyone. …

My first car was a Ford 100E which I turned into something like a custom lead sled with frenched lights and shaved door handles. No door handles meant I had to put in an electric solenoid to get in to the car. The actuator I used was a very basic reed relay, simply switched by a magnet on my key ring - this was all before wifi style remote key fobs. Almost zero security if you knew how it worked, otherwise impenetrable unless you smashed the window.

Oh, just remembered. There was a small amount of extra security in having an external keyswitch to send power to the actuator mechanism. But it was much cooler to just wave your hand over the car and have the door pop open.

What is the difference between the TIBBE (just learned that word) keys (that I never use) that stop the valet from stealing all the stuff in my boot and a regular key. I can see no real difference but one of my three keys doesn’t unlock the boot (that I never lock). 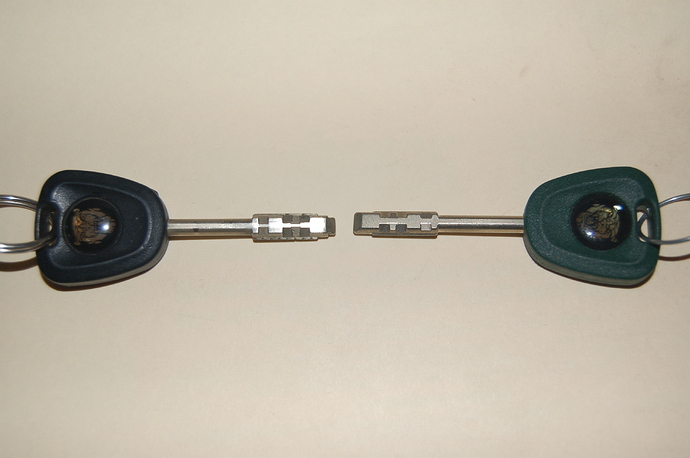 The tip is obviously larger on the VALET key and cannot be inserted all the way in the glove cubby and boot lid locks.

From my days at the dealer!!!
TSB for you. 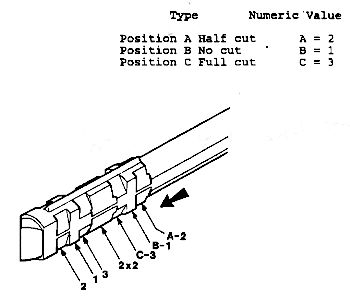