I’m starting to get parts ready for my 140’s engine rebuild. A couple of questions:

So you have an early 120 engine but does it have the later, 3/8" cams and beveled tappet guides? The block was later modified to fit the hydraulic tensioner but I don’t know how easy/feasible that conversion would be for you. Do you have the later style oil pump?BTW, my engine only needed chains and guides.

The engine is 140, not 120, Lee - engine number is G3736-8S. It does have 3/8"lift cams, can’t remember the tappet guides offhand. The oil pump is not the very early one - the car is May/June 1955.
Thanks for the heads up or what yours needed. Are these pretty tough timing sets, then? When rebuilding an engine I usually replace timing chains and sprockets as sets as they wear together. Is that not usual with an XK engine? Never done one before…

I had forgotten just how long Jag stuck with the “sprung blade” tensioner. I do believe there were major block changes around engine number G1908? The problem seems to be the spring breaking on that older tensioner so one would have to trust an aftermarket replacement spring.
The timing gears appear to be harder than woodpecker lips so don’t replace them by rote…inspect.
I’m thinking maybe both the hydraulic tensioner system and new oil pump design were introduced at that G1908 engine number.

No - mine still has the blade chain tensioner, not the hydraulic one, and it’s G3736.
I’ve always thought sprockets wear with the chains, but if they’re not normally replaced at a rebuild I won’t. Probably worth doing the tensioner conversion though.

is there any way to repair/replace the eccentric? I haven’t found anyone selling them yet. If I change the bush, does it need reaming, or is the fit reckoned OK as fitted?

Yes, the bushings replaceable, and they do need the be reamed/honed to fit. This photo is 12 years old, so I don’t remember the part numbers. 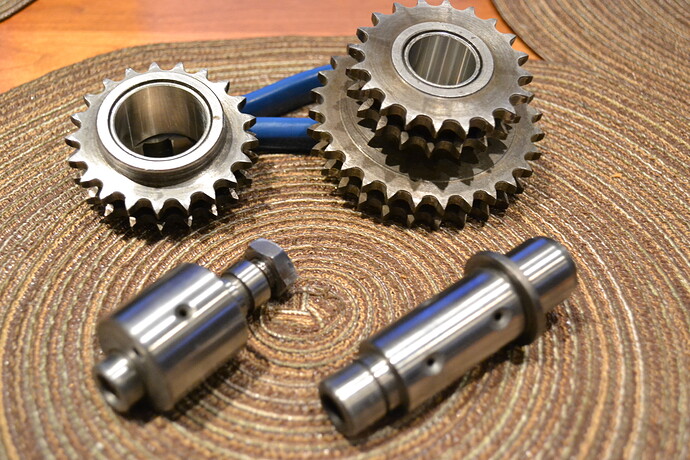 Thanks Mike, I guess they are reamed to match any wear on the eccentric?
Would you replace the blade tensioner for the hydraulic? Unfortunately I’ve never heard this engine running so I don’t know if the sprockets are too badly worn - it’s hard to tell just with a visual check.

If you have the original manual, or reprint, the 140 section may show the block modifications and parts required for switching to hydraulic. I’ll look at mine later.

I used either a drill bit or a piece of tubing to assess the tooth wear on my sprockets. Placing the two cam sprockets back-to-back can show wear as well since any wear will now be on opposite sides of the teeth as you look at them with tooth peaks lined up.

Roger, with the chain tensioner/ oiler I went back and forth on this during a rebuild of my other '120 two summers ago. I’m probably in the minority, but even after purchasing the hydraulic type of oiler, I still opted to keep the original setup. I think it was Rob Reilly (?) who mentioned it’s common to get 100K miles out of it before it simply wears through and makes for clatter. Something else to consider: if you do away with the original setup, you’ll no longer have three jets of oil being directed at the chain. There won’t be any oil being specifically directed at the chain. Some may argue that the mist of oil in the case and what comes down from the cylinder head is enough, but I still prefer the original. Also, others on here have mentioned the rubber bond failing on the hydraulic types due to manufacturer quality control issues which was the final straw leading me to retain the original setup.

As has been mentioned above, the weak link in the original tensioner set up is the spring, The only time my XK ever failed me in all my years of ownership and thousands of miles of driving was on the two occasions when the spring let go, First back in the early sixties when my dad towed me home on the end of a rope and second when, enjoying a lovely drive along the Niagara Parkway with my wife.
That occasion meant coming home in the cab of a tow truck with the XK on the hook astern.
Fortunately, I was not driving particularly quickly and sustained no other damage each time

Thanks for the advice, all. It may be significant that when I dismantled my engine, the spring fell out with one end broken off - it hadn’t been doing anything. Luckily I hadn’t run the motor.

Admittedly, the single post that retains the bottom of the blade spring is a weak spot. I observed mine as having been stripped out and the threads repaired with some type of helicoil – which failed again. I ended up making a new oiler/tensioner bracket assembly out of steel. Somewhere on here there’s an old thread with a picture.

Chris, I thought failure of the tensioner blade only meant that what was left simply flopped against the chain making for some clatter. Was it so bad that it caused damage to your engine?

Actually, in the retrofit “hydraulic tensioner” design (a misnomer) oil passes through the witches hat oil strainer, located in oil feed passageway in the block, and feeds through a hole in the rubber face of the tensioner. Oil is constantly being pumped through the hole and onto the chain and onto the rollers and links. I call the name “hydraulic tensioner” a misnomer, because it does not work by hydraulics, but rather has an ingenious ratcheting spring loaded plunger that travels outward and locks in place as the chain wears and the slack allows for movement. Oil passes through the tensioner plunger but the spring provides the main driving force, and the ratchet prevents it from traveling backwards.

I should have corrected/edited my earlier post. The first time the spring broke, presumably because of the resultant slop in the chain, the chain broke and in the process chipped a tooth on one of the sprockets. This resulted in some interesting correspondence between myself and F.R.W. “Lofty” England after I was informed that Jaguar of Eastern Canada in Montreal did not have the sprocket in stock. He informed that they had forwarded the item to me and would I be so kind as to remit the price to them upon receipt. Turned out there had been a part number change or something and the distributor in Montreal was not on top of things as they did have it in stock (one senses someone in la belle province got a verbal rocket from the UK!). I still have the correspondence.

After removing the cylinder head we inverted it and filled the combustion chambers with coal oil and left it overnight. Fortunately, no leaks and, once the new sprocket arrived and new chains were purchased, put it all back together. The second occasion (many years later) the chain just let go and as the car slowed I immediately suspected what it was, removing the oil filler cap and noting the camshaft as not rotating when I turned the engine over confirmed things. On strip down once home the culprit was found to be the spring on the tensioner, again. No sprocket damage or anything this time thankfully. No idea when exactly the springs let go in either case, I just assume that once the tensioner was not doing it’s job then the chain eventually slopped around enough to finally break, although I do not recall hearing a lot of clatter prior to either break.

Actually, there is quite a large amount of (liquid) oil cascading down from the front of the head PLUS the oil that is cast off of the cam sprockets due to the upper chain oiling system which was employed at least thru the 140 engine.
The hydraulic tensioner does use both spring pressure and hydraulic pressure…spring pressure being dominant at low oil pressure, while higher engine speeds generate more tensioner pressure via higher oil pressure than just the spring does. There was a quite detailed discussion of this many months ago on the E type page…with photos.

There was a change in part number of the spring, and two changes in the blade, presumably improvements, but those changes occurred during the XK120 era.
Funny, I don’t find any record of the hydraulic tensioner coming in on XK140, not until the XK150 era. I wonder if they failed to record it for the 140 book, because it certainly came in on Mark VII with engine D9869, which would be around mid '56 I think. I’m sorta half sure G4686 had it.
In any case, my only failure experience here with my 120 is the coil spring 49 wore thin and the hook on the end bent away. It was original and unknown mileage. It’s a special spring with beehive ends and the hooks are separate parts that feed through the beehives.
As I recall I got the new one from Welsh in Ohio, which was identical. 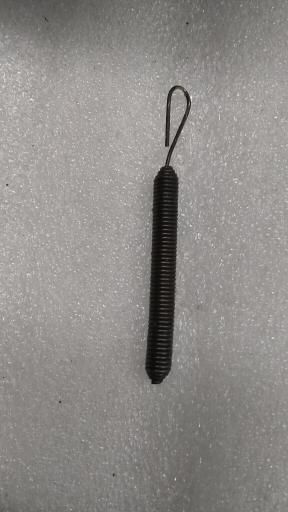 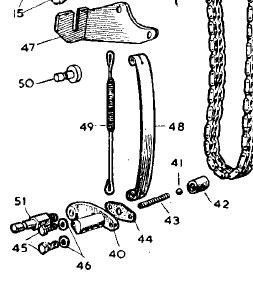