There was something making light noise in the timing chain area, so I got the cover off, and found the guide missing its rubber.

Maybe this is another case of poor repro parts?

I can’t see the rubber part, the engine’s in the car with sump on. Do think it may harm something?

I’m guessing the glue failed and it fell in one piece into the sump, where it should be safe. A new one is shown for reference. 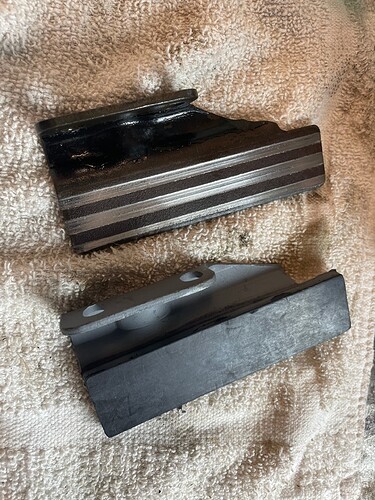 Is that it on top? Did you pull the head and remove it? This same thing happened to me 4 years ago. It flew up and snared in the upper chain and seized the engine bending a rod and breaking a bunch of rings. If that one in your photo is it, then you can see the chain has been dragging along and grinding so you have glitter everywhere through your engine. Mine required a full bottom end rebuild after this madness.

If your slipper made it past the tangle of chains and guides and is in the sump, nothing worse will happen. In that case if it seems to be running, and you can replace the guide, I can’t see things getting a whole lot worse for you. The filter will catch most of the glitter and it will be what it will be.

But if the rubber is hung up somewhere and can still cause a seizure then it’s anyone’s guess what will happen. A cheap USB wand camera might give you an idea where it is.

It sounds like I dodged a bullet, judging by your experience.

Yes, the guide shown without sllpper is the one I removed.

Hearing the rattling sound worried me, I knew if something went through the chains, it would mean a new engine.

I was thinking that that there is a cage around the pick up screen, so if the rubber is in there, I can’t see how it could even get close to the suction pipe.

I did take the head off, and luckily, was able to remove the timing cover without dropping the sump. The last rebuilder used bolts through the sump into the cover, in place of the usual studs, which made it a little easier. I could just pry the cover back off the locating studs, and lift off. I think I’ll cut the studs down a bit to make installation easier. It puts stress on the crank seal to pry it back too far.

I have most of the gaskets and parts in my treasure trove, except for the lock plates for the cams and chain guide. I’m planning a trip to SC next week, so may stop in at Welsh Jaguar and pick up those parts,and have a look around.

It won’t surprise you to know that there have been some bad parts doing the rounds over the past few years. There have been reports of not just rubbers coming off , but the metal fracturing on the bends.

This thread IDs the bad parts, and how to recognize them.

While at the Hagerty Young Drivers Experience last weekend I noticed an intermittant little rattle coming from the engine. Came and went. Drove home with no problem and got around to troubleshooting today. I isolated the noise to the timing gear. On pulling the cam covers I found the upper left chain damper had sheered off. just above where it’s bolted to the block and the broken piece was sitting loose in the engine. No apparent secondary damage. This aftermarket piece was part of a large kit …

Mine was installed 22 years ago, but I’m sure we were well into the aftermarket by that point. I spent a couple years perusing eBay for NOS ones in preparation for the rebuild. The ones Rob Beere offers are are aftermarket but I believe are at least put through a torture test to see if they hold up.

I have a 2.8 that has fractured and badly worn guides… that could be an explanation since it was rebuilt once.