We have a 1948 Mark IV drophead coupe with Dunlop Goldseal 525/550 Tires. Would like to replace tires.
What would be the best? What Rim Width should we use? Currently blackwall perhaps switch to WW.
Coker lists about 6 different models with different Rim Widths 3" to 5".
One type is Bias look radial Specs 4-5" Rim width. Thoughts?
Thanks for the help.
Lou

If you decide to fit cross ply tyres be sure to specify 6 ply and not 4 ply.

I would suggest paying a little more for heavy duty tubes as with modern beaded edges and the design of the wire wheel they are prone to rub the tube against the spoke nipples with lighter tubes. And Mk IVs with white walls look like a tart dressed up for a night out.working. Often compounded by chroming the wheels.
You will have to excuse my bluntness, I just foud out one of my MK IVs that was nicely original is now in UK where the new owner has fitted trumpet horns,a moveable spotlight on the door and inappropriate mirrors. he also asked what the wires on the right hand side of the spare wheel compartment., as if I could remember after almost 40 years. I suggested if he really wanted to know,cut them and see what stopped working

My car came to me with no tire on my spare wheel so I took this pic before I restored it and put a tire on it. 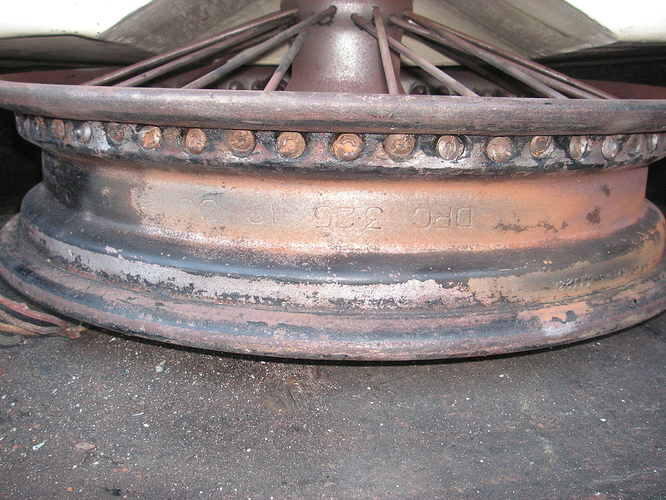 I would suggest paying a little more for heavy duty tubes

Ed’s comment should be regarded as an absolute must.

With my spare tire and tube I also bought a rubber rim band that covers the spoke ends.

There are only two that are 6 ply. We agree on White walls. Will leave the final decision up to my spouse.
The rim width at 3.25 is the number needed to clearly specify the tires. Waiting on the tire suppliers to respond. Tube fill valve failed so thicker tubes are definitely needed.
Car is a blast. Replaced wires, plugs, rebuilt carb recorders oil drain plug. Fixed all leaks.
Runs great. Eventually will get up enough courage to repair gages under wood panel and replace key switch starter. Thank you again for the replies.
Lou

I installed Coker Item #713950 550-18 BFG Black with 17" 1.1/2 Rim-strips & tubes. So far no issues with handling up to 60mph. Though I admit to little accumulated mileage up till now. In my opinion, the thread & side profile is more in line with the sporty appearance of a MK IV.
Daniel

The tyres issue . When the cars were new There was abig rangeof cars using 18" wheels, So there were 500x18, 525x18 ,550 x18 and many others. NOw 18" teyres are the mass production item they once were, So manufacturers have amalgamated some sizes And dependingwhat moulds they have access to the may sell 525 as 550s, Which may not matter on smaller lighter cars, But a mK IV with 4 passengers may likely notice it.
So one should look at the width of the tyres on offer, not the size on the sidewall.
I’mnot sure how Robs rubber band will help with the spokes. It won’t stay on the outer section where the spokes are while the tyre is installed and the other issue is that originally the bead of the tyre was pointed and fitted against the well fo form a continuous line. Modern tyre beads are rounded for safety rims and these now come on 18" tyres. S

So that leave a gap between tyre bead and rim where the air pressure can push the tube .I’ve had them show a crack the whole way round the tube at that point.

My understanding of the rim bands is that they were only intended for centre-laced rims and had a hole for the valve where a centre valve would be fitted. For outer-laced wheels, the bead of the tyre acted as the rim band and covered the ends of the nipples.

Adding a rim band here increases the diameter and it can be fouled, displaced and pinched when fitting the tyre, as mentioned by Ed. It can be displaced, non-uniformally, partly into the well and partly up the rolled edge of the rim. This can be difficult or near impossible to detect.

As Ed notes, the original tyre moulds had a small turned down lip, a bit like an oil seal lip, that pressed the inner edge of the tyre bead against the inner edge of the rolled down part of the rim. This gave a smooth transition for the tube, down the tyre wall into the well, preventing the tube being severely distorted into this, otherwise, gap and developing the longitudinal cracking. These little lips often got torn when using tyre levers if care was not used.

Sorry it never occurred to me to take a picture of the rim band, but as I recall it was a straightforward installation, and I certainly would have noticed if the valve hole was in the wrong place or the band had not covered the spoke ends, which was the obvious reason for using such a thing.

And Mk IVs with white walls look like a tart dressed up for a night out.working. 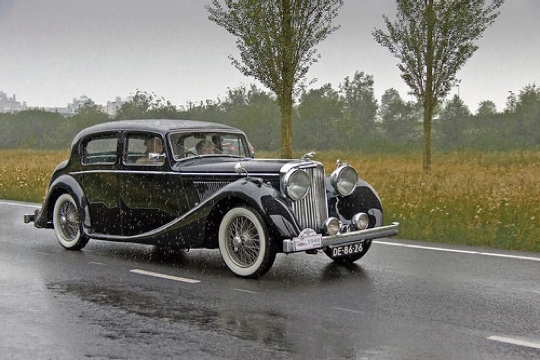 Sorry, I can’t help myself but in these days of gender fluidity, wouldn’t such a car be a “trans-axle”?

At one stge I needed new tyres and Antique yres only had a set of 550x 18s in white walls.
So I had them ut on with the white facing inwards.
mm looking at the pic ,European numb r plate. but RHD driving on the LHside of the road. But pouring rain , so must be uK.
Was Jagayur the word you were thinking of? : >)

But pouring rain , so must be uK.

Was Jagayur the word you were thinking of? : >)

Excellent! You can always be relied on for a witticism. I’m definitely a Jag-U-ar.

Ivan Stevens recommended that I buy Blockley Tyres for my MKIV. They certainly have been reviewed well and they look ‘period’. Here is a photo of them on a MKIV in the UK I found on the internet a few months ago. NB. All Black! 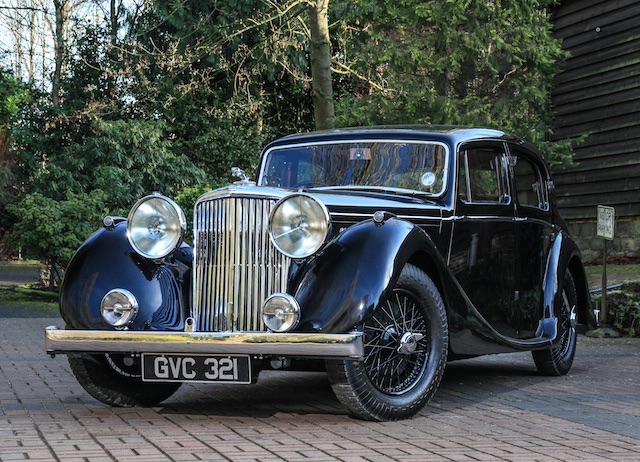 I wound 2 layers of cloth bound adhesive tape around the spoke line - been on for 35 years now and never broken through at the spokes. I find 550x18 Firestone tyres slightly smaller than BF Goodridge and I needed to drive my daily over the deflated tyre to get them off - BF Goodridge does not have this problem and separate easily. I tried 525/550x18 tyres and got rid of them before even the mould makes had worn off - they were nylon too that got flats which I hated when first driving off. I too am looking for 6 ply tyres with a highway tread - at the moment my BF Goodridge are the noisiest part of the car. Have been looking at Blockley with interest but they are nylon and Blockley themselves admit that they get flats and are noisy on the road - they look good though.

Blockley themselves admit that they get flats and are noisy on the road - they look good though.

Noisier than a typical MKIV? I’d be surprised if you could hear the tyres above the rest of the mechanical noise.

Have been looking at Blockley with interest but they are nylon and Blockley themselves admit that they get flats and are noisy on the road - they look good though.

This is from the MWS website and I trust their thoughts on the tyres.

"With a slim, upright design the Blockley is not only traditional in appearance but helps with airflow to the brake drums on higher performance cars, negating the need for offset rims. The period-looking three block tread pattern offers maximum contact area which has superior wet weather performance whilst maintaining a look that is not out of context on any pre-war car. Particular attention has been paid to overcome the “chunking” problems witnessed with other makes of tyres.

Blockley tyres are designed to correctly fit a range of period rim widths. The alternative for owners of higher performance cars, such as the G. P. Bugattis, has been to either dangerously over-tyre the wheels or to fit non-standard, non-period wider rims to suit the tyres available.

The rubber specification is no softer than “204” which is the VSC and FIA standard chosen. Although technically a road tyre Blockley has more than proved itself “on the pace” with other brands on the race track and has been designed to take you from the road to the track and home again."

So they are not nylon but rubber as I thought.

Blockley themselves admit that they get flats and are noisy on the road - they look good though.

Noisier than a typical MKIV? I’d be surprised if you could hear the tyres above the rest of the mechanical noise.

Mechanical noise should not be a major factor in a MkIV. Wind noise will be the biggest contributor but if you are running down wind then you will certainly be more aware of the tyre roar from Blockleys than from tyres with more linear treads.

I guess I’ll find out when I eventually get my MKIV back on the road. Don’t get me wrong, various noises are part of the attraction of the cars for me, be they wind, tyres, motor, gearbox, exhaust.